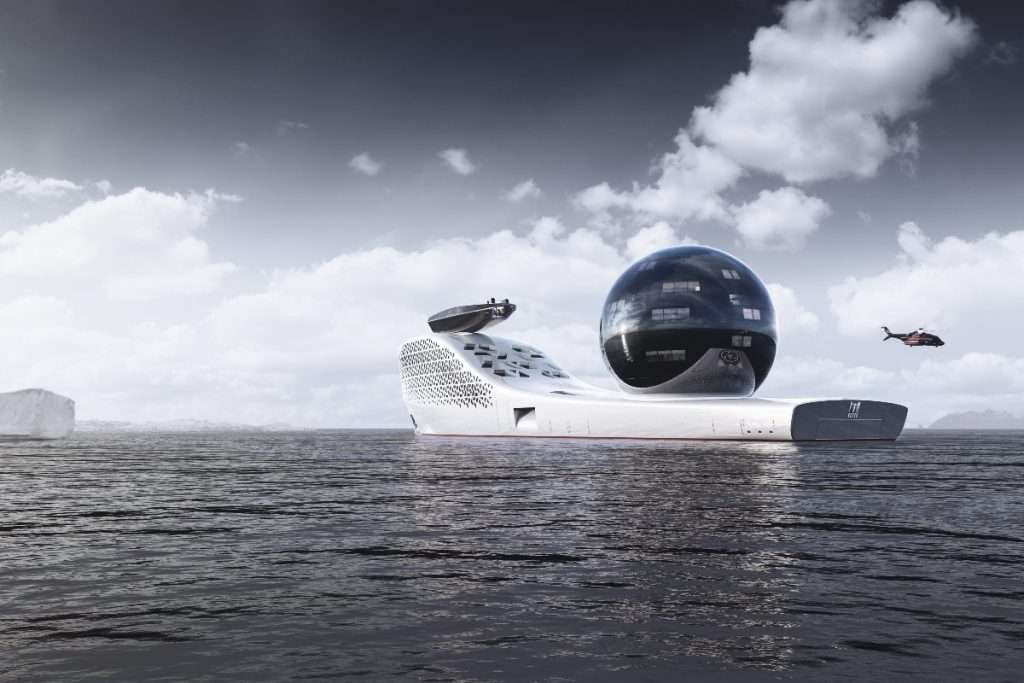 In April, details of the 300-metre Earth 300 proposal were released. This megayacht concept is the brainchild of Aaron Olivera, a Singapore-based maritime entrepreneur. Olivera is seeking funding for his new project which, if it comes to pass, could mark a sharp departure for the way superyachts and commercial ships are powered.

Olivera and his consortium are championing nuclear power from a new breed of nuclear reactors that use molten salt as both coolant and fuel. These reactors (Marine Molten Salt Reactor, or m-MSR) were first developed in the United States in the 1960s. Ultimately, they were replaced by lightwater reactors, which became standard for nuclear energy production. The US Navy powers its ships on pressurized water reactors.

Proponents argue that nuclear power is the best option to scale up carbon-free energy quickly enough to combat climate change. Nuclear power is currently responsible for approximately 10% of the world’s energy production, according to the World Economic Forum. Olivera is betting that he can gather investors to launch a vessel that is part scientific research vessel, part superyacht, part cruise ship, powered by a small nuclear power plant. The Biden administration has signaled its support for nuclear power, including for marine transportation.

Asia-Pacific Boating: What are the key technical challenges you are facing with the new m-MSR technology?

Aaron Olivera: MSR technology is developed for land-based (usage). Thereafter, its adaptation for maritime will take place and that will be relatively easy as the technology is rather compact for the power output needed for Earth 300. 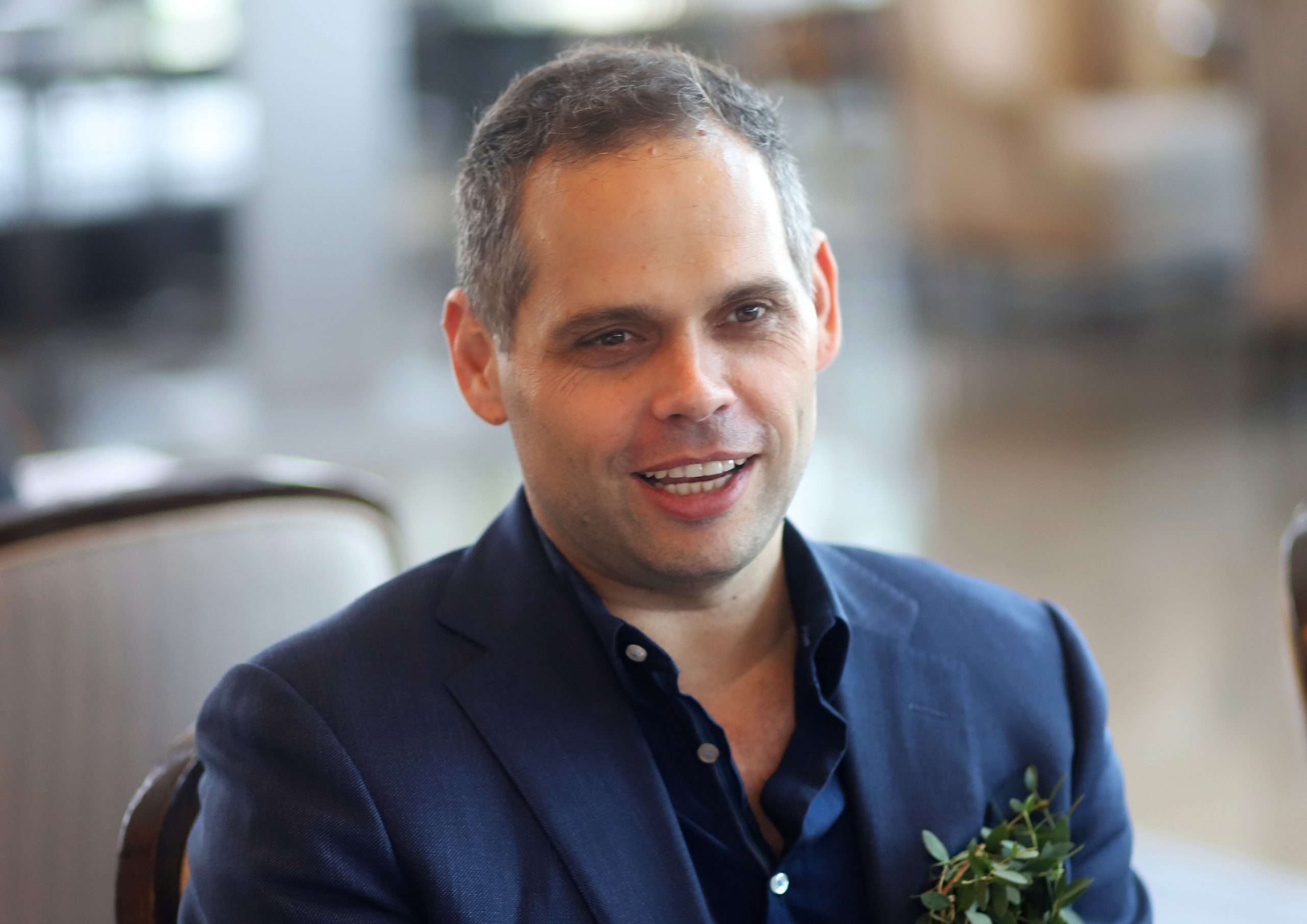 We are looking at the size of a 40ft container in volume. Earth 300 has worked with Core Power’s technical team on our naval architectural drawings that have been adapted to make space for the m-MSR after the start of operations, complementing our Generation 1 power-plant system.

Probably the most interesting qualities of the m-MSR is that it can be turned off and on at will, which is of great importance for our operations planning

Offering excellent stability control of the m-MSR is one of the important technical considerations. Probably the most interesting qualities of the m-MSR is that it can be turned off and on at will, which is of great importance for our operations planning, as we may want to sail in territorial waters of countries that have not yet certified the technology. Presenting our modus operandi and protocols in advance will greatly facilitate Earth 300 securing the exploration permits in some places.

APB: Are there comparable examples of m-MSRs in use on vessels and ships today?

There have never been MSR’s installed on ships; this will be the first time. m-MSR was conceived and developed essentially to truly meet the existential needs of the shipping industry, which is a relatively high contributor to carbon dioxide emissions globally.

There are great strides being made in that (shipping) industry, where numerous regulation changes have been introduced over the years. But it is very costly and taxing to the industry, often relying on massive subsidies. We want to help decarbonise the entire maritime fleet by promoting and accelerating the adoption of new technologies (such as m-MSR).

What made you turn to the Molten Salt Reactor to produce zero-emissions power, as opposed to other solutions, such as hydrogen fuel cells, Li-ion batteries and methanol/ammonia?

Atomic energy is the only power source that produces true zero-emission energy. Current solutions have false energy economies – you have to look at what it takes to produce, store and transport them. With a MSR, you literally plug and play. It is the atomic battery pack of the future. At first, Earth 300 will be running on a set of hybrid systems and go as far as possible with synthetic green-fuels until it introduces m-MSR.

You list RINA as a partner in the Earth 300 project. What is their role? Are they developing a code or set of rules regarding nuclear powered yachts/pleasure vessels?

RINA is the No.1 classification society globally when it comes to certifying passenger vessels – we have chosen them as our classification society because they are an extremely progressive company who will indeed help us navigate the nuclear waters in due course and to further work on sustainability initiatives with us on a global scale.

How did the consortium of people and partners come together on Earth 300 – what was the impetus for this project?

The impetus for the project was seeing a need to address climate change and to address it with a new global language – one that is attractive and compelling and something that the person on the street can rally behind. It has then been an evolution of almost six years of work and along the way, the project has been attracting incredible people and companies from all around the world. In the last 15 months, we have secured relationships with some major global players like IBM, RINA, and Wartsila and Core Power (who is behind the Molten Salt Reactor) as our propulsion partners.

In the last 15 months, we have secured relationships with some major global players like IBM, RINA, and Wartsila and Core Power (who is behind the Molten Salt Reactor) as our propulsion partners

You have given a launch date of 2025. Do you know where the Earth 300 will be built? Who will be responsible for building and installing the m-MSR engine/propulsion system?

At present we are starting conversations in Germany and South Korea. Europe in general is also being strongly considered depending on what the respective Countries can offer us as support.

Who is providing financial backing for Earth 300? Are you now seeking investors?

Up until now it has been one private investor and my own money.  We are in talks with some private individuals and some large brands for next stages.

What is the provision being made for charter guests? How do you anticipate the VIP/Luxury/Yachting side of Earth 300 working: like a superyacht charter or more like the cruise ship model?

It will be a cruise-expedition model, based on 10-20-30 day expeditions, for purposeful individuals who come to support the science and have a great time whilst they are at it. The science determines what the ship does and where it goes, private guests come not just as consumers but also as contributors.

Imagine sitting under the tree with Newton when the apple falls or enjoying a cognac with Galileo when he creates the modern universe. You are there with them, at the cutting edge of science, making history.

Do you expect that Earth 300 will be based out of Singapore? What would the flag state be?

Our HQ is in Singapore, our design hub is in Barcelona. With regards to the vessel flagging, we are working with our class partners to select one that is most suitable to our aspirations and operational requirements. It will not be a flag of convenience.