Remote Chuuk Lagoon, far out in the western Pacific Ocean, witnessed one the biggest naval battles in history between the United States and Japan. Today, the wrecks that lie just below the calm surface have made this one of the world’s premier places for wreck diving. And there’s hardly anyone around to spoil the view 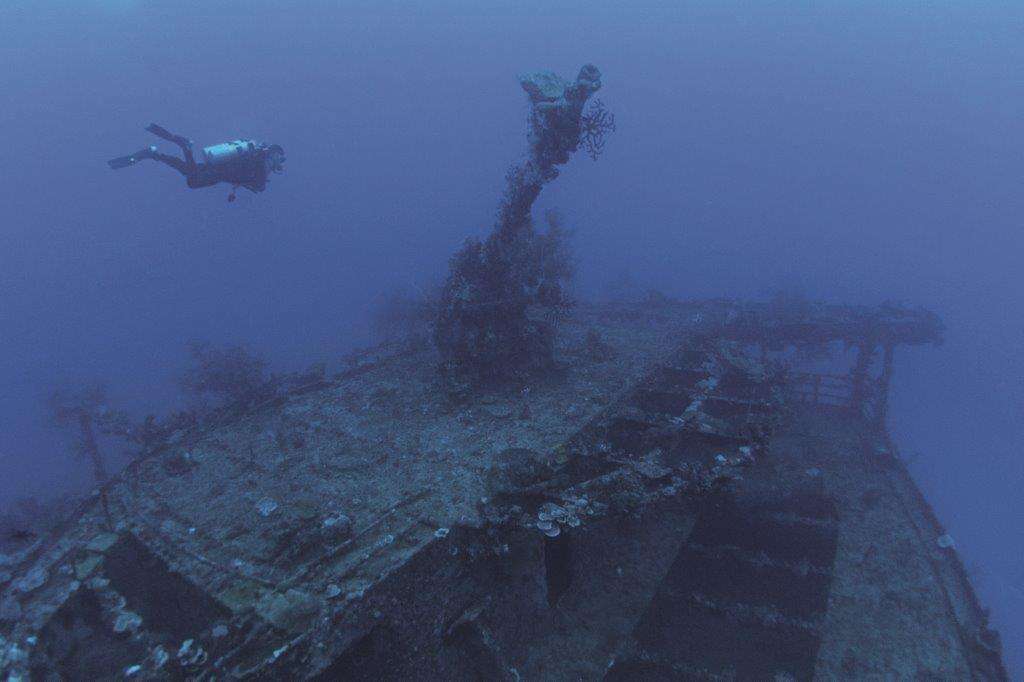 The many islands and atolls dotting the expansive Pacific Ocean offer beautiful bays, inlets and beaches to enjoy. But the story of some lagoons runs deeper than picture-perfect vistas.

In February 1944, the United States Navy launched Operation Hailstone, a multifaceted attack on the Japanese occupied islands of Chuuk (formerly Truk) Lagoon during the Pacific theatre of the second world war. After two days of intense air and surface raids, over 50 ships were sent to the bottom of the lagoon.

With such a brutal history, it is hard to imagine the destruction that once occurred in this tropical Pacific paradise, as I sip a coffee and watch the sunrise over the islands turning the sky deep red and orange. 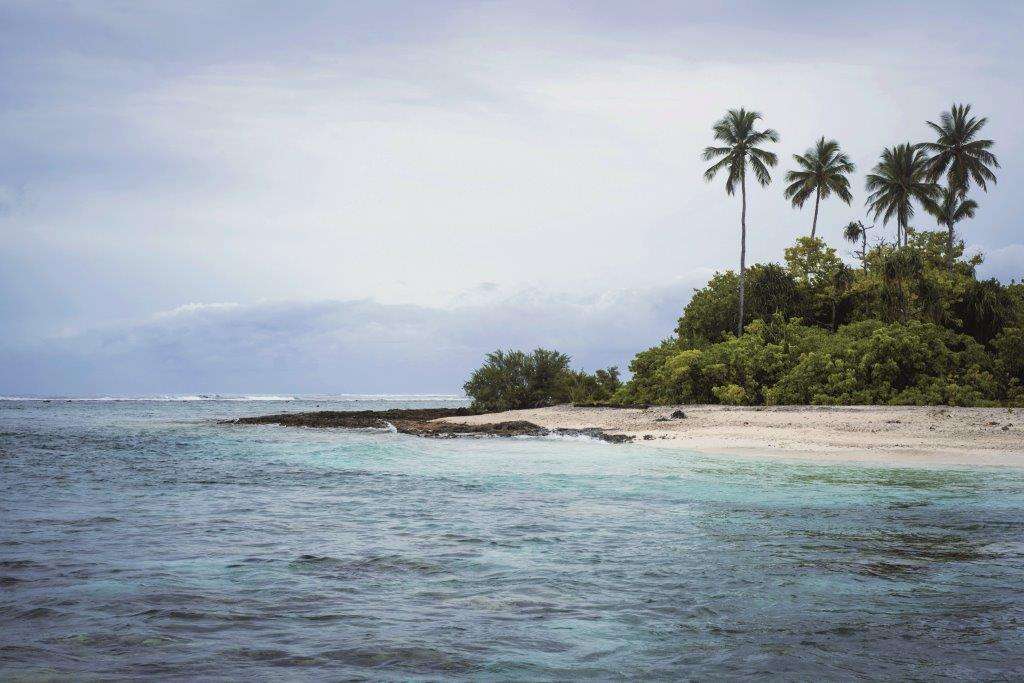 A place known to few outside of second world war history buffs and a small subset of scuba divers, the Federated States of Micronesia is one of the least visited countries on Earth (even less visited now thanks to Covid-19, which has been kept out completely). But for those in the know, Chuuk has become a bucket-list scuba diving destination, where you can swim within a unique underwater museum revealing a moment in history that remains preserved in the depths.

A place known to few outside of second world war history buffs and a small subset of scuba divers, the Federated States of Micronesia is one of the least visited countries on Earth

The few lucky travellers who make the journey to this far-flung place may struggle to understand why it hasn’t become a more popular destination. I sometimes find myself standing on the island of Weno looking out over turquoise waters and blue skies and can almost picture luxury dive resorts with beach chairs to lounge in. 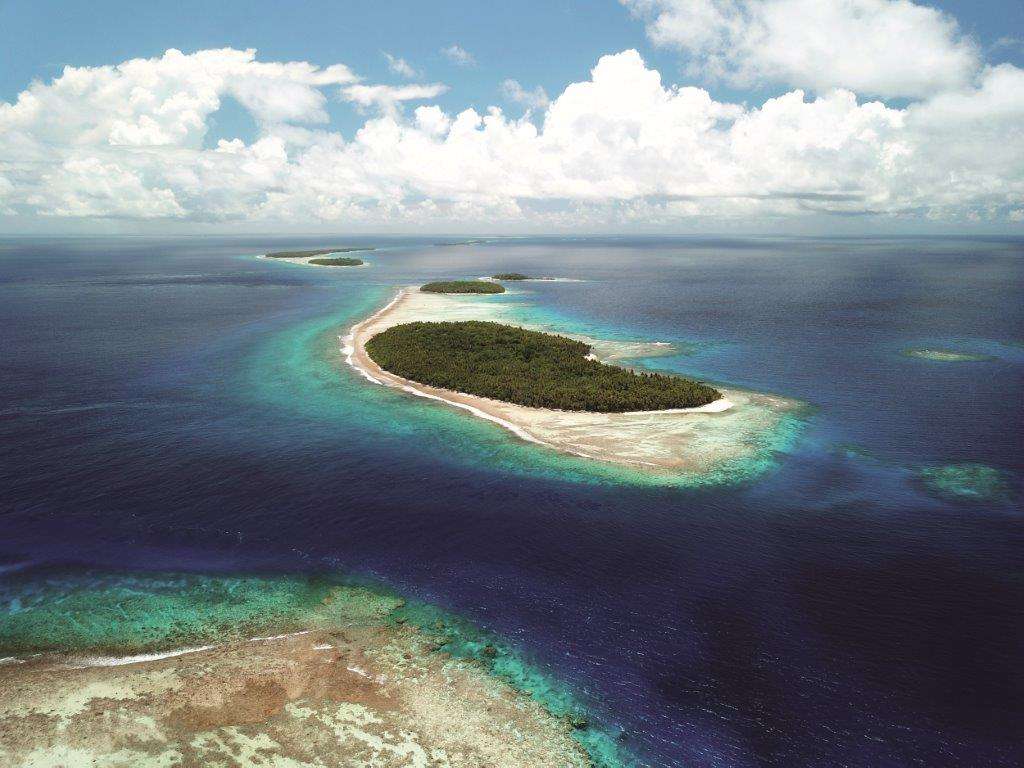 Yet, there are no major resorts here, making this island a place of true discovery. Chuuk has kept mass tourism out, and there are only a few small hotels and liveaboard dive yachts to be found here. This seclusion belies the fact that Chuuk International Airport has a sizeable enough runway to land passenger airlines, with United Airlines flying in almost daily.

Close to the equator, the weather is usually calm, though typhoons can appear during the months of summer and autumn. The coral ring reef encloses the main island group, making for a protected area where most of the population lives with consistently calm waters. While it rains a little almost daily, the sun shines every day. 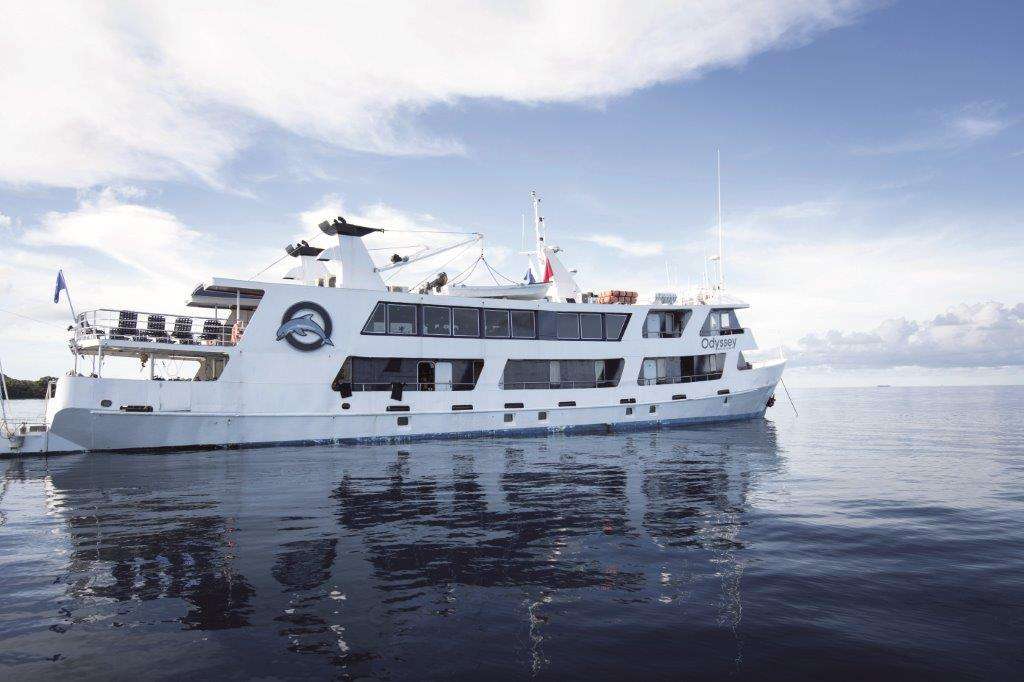 That protected lagoon is what attracted the Japanese navy in the early days of the second world war, during which they built up strategic bases through the Pacific; Truk Lagoon was a major base during the war. Today, Japanese destroyers, merchant ships requisitioned into military transport ships, aeroplanes, and even a submarine can be found lying below the lagoon’s placid waters.

Chuuk is now considered to offer some of the best wreck diving in the world. The warm equatorial waters and lack of current or strong seas make diving these wrecks easy. The protected lagoon has left them surprisingly intact despite being underwater for over 75 years.

The Federated States of Micronesia (Chuuk is one of four of these states) realised the value of their history and made it illegal to remove artefacts from the ships. Because of that, divers can see an amazing array of relics from the war, the battle from Operation Hailstone, early 1900s maritime history and Japanese personal effects. 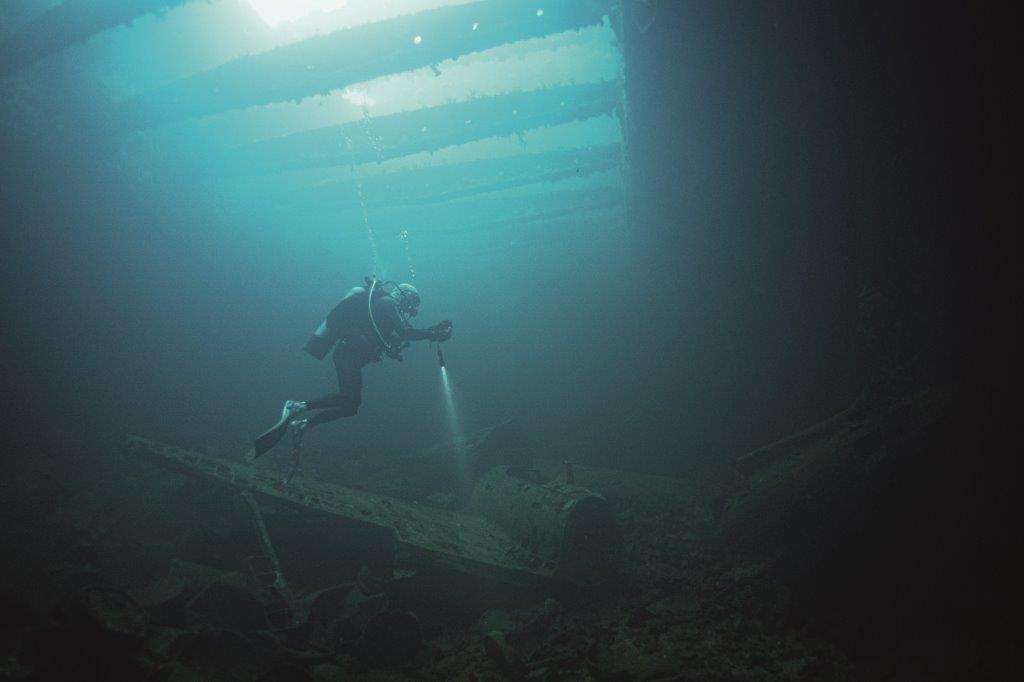 While swimming in and around the ships, we commonly see china, painted teapots, rubber soles of shoes, beer and sake bottles, cooking equipment, buttons from uniforms and more. For those interested in second world war ammunitions, some cargo holds contain long lance torpedoes, land mines, depth charges and piles of bullets. On the decks of some ships, we find tanks that were being transported, howitzer guns and depth charge launchers.

But it is not just reminders of war that one can find in Chuuk’s waters.

One of my favourite aspects of these former vessels of destruction is how the tropical waters have decorated them with marine life. Pink and purple soft corals drape over guns and decorate masts. Schools of brightly coloured fish swim around the ships, and we even see vibrant clownfish living in anemones living on ship decks. Turtles, rays and sharks are a common sight. 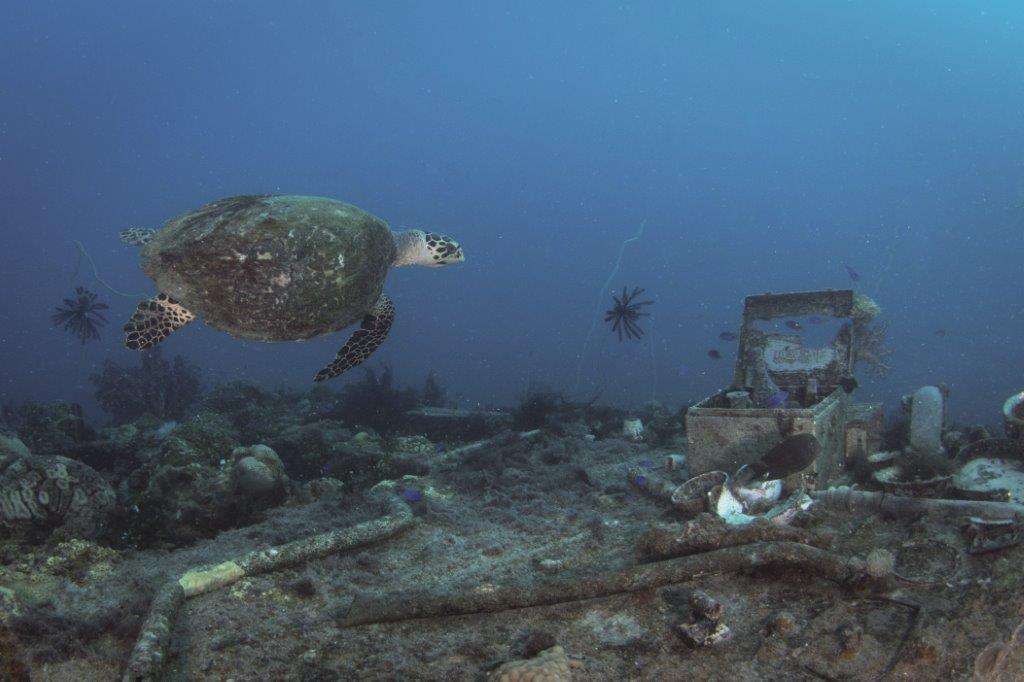 Much of the wreck diving in Chuuk Lagoon can be done within recreational diving limits, ie without specialised training. But for those willing to go a little deeper, there is much more to see.

Many ships are intact enough for divers to penetrate the wrecks, exploring the engine rooms, crew quarters, cargo holds and more. Local Chuukese dive guides who have been diving the wrecks for many years can give tours deep inside the ships: into galleys with rice cookers and stoves; wheelhouses with telegraphs and steering stations; and through companionways and downstairs to different deck levels. 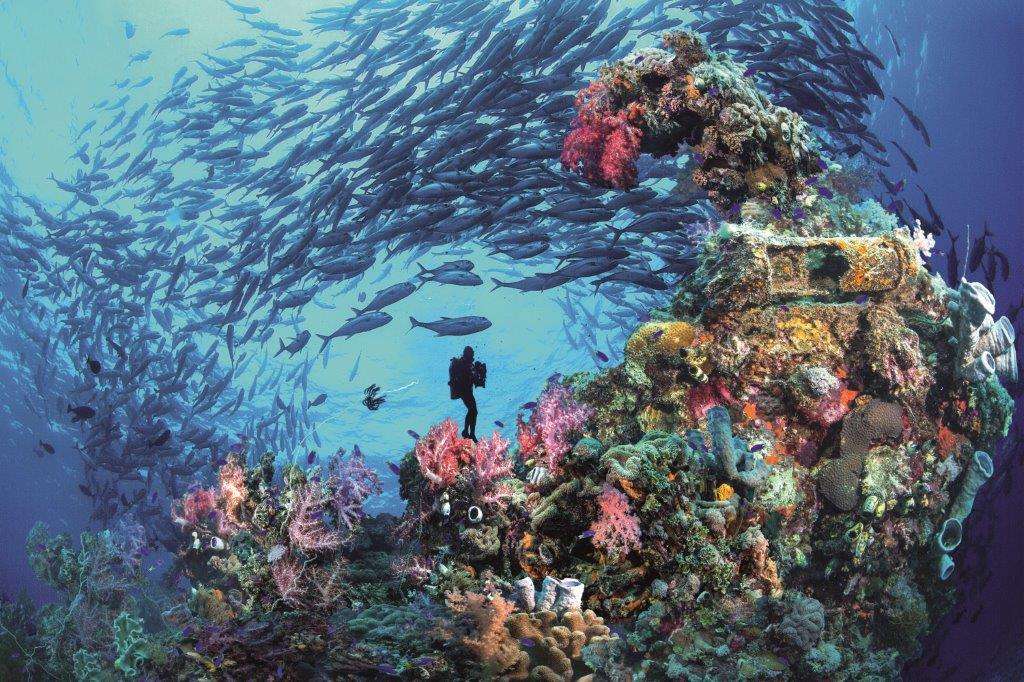 There is a rush of adrenaline diving shipwrecks, particularly if you are going inside the dark passages of the ships’ interior. However, diving these ships also give one a sense of sorrow and gloom, reflecting on how many lives were lost as they sunk. Occasionally, I see something like a medical kit or a small pair of eyeglasses someone has found, and the dark history of the place hits home.

I love the beautiful marine life that has grown up over these wrecks; it seems to decorate the ships in a kind of natural memorial.

Working and operating a vessel in such distant locales always presents new and interesting challenges, such as getting fresh produce and spare boat parts. But the company prepares for this with spare parts of everything imaginable (including a spare espresso machine, as this captain would struggle without). 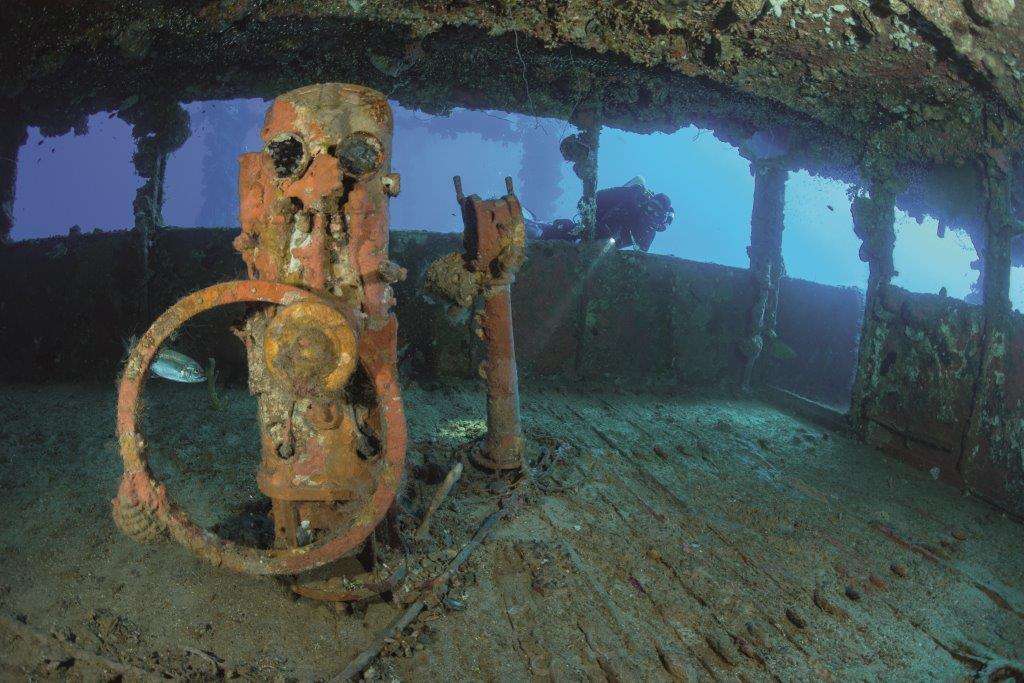 The wheelhouse of a sunken vessel

A container ship arrives about every two weeks from Guam, bringing eggs, lettuce, fruits and vegetables not grown here. We reserve our produce in advance and often have to adapt and improvise when the lettuce all arrives spoilt or no eggs made it on the ship.

While we may struggle with some things here and there, we do have an endless supply of fresh tuna, lobster and other fish usually delivered to our boat by the people who just caught it. After another day of exploring history underwater, we pour our guests a cocktail and watch the sun set over the islands while a few brave souls jump in for a night dive on the wrecks.

It is not a bad way to spend a few weeks at anchor. Luckily, there are no crowds spoiling the view.