The Solomon Islands, one of the remote nations of Melanesia, is home to a tiny clutch of islands that hosts the most important nesting site for hawksbill turtles in the South Pacific. Their numbers were devasted by the fashion industry and the growing impacts of humans on the ocean. But there is hope in the Solomons, with a marine park that protects nesting turtles on the Arnavon Islands. Eco-tourism and visiting yachts could support the next phase of protection. 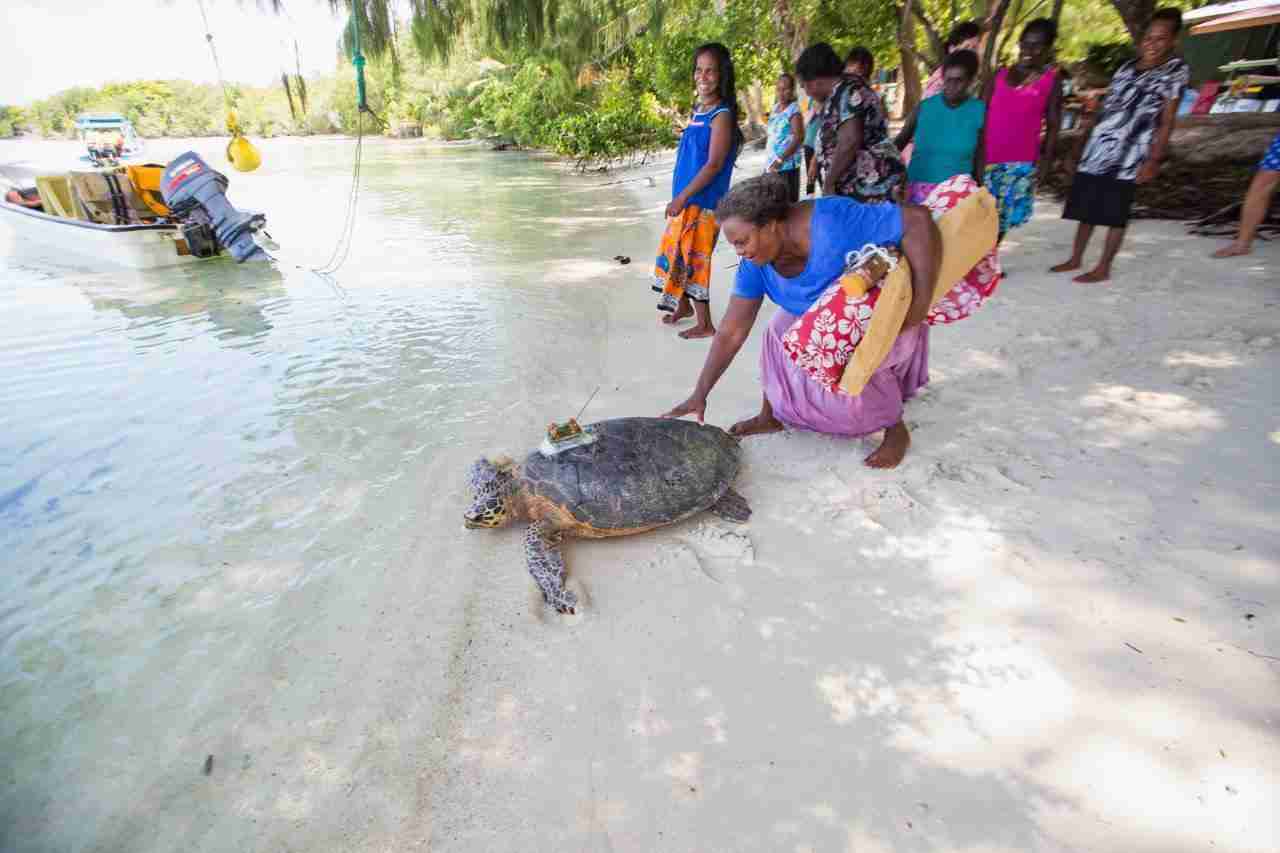 “A lot of religious people who come to the Arnavons say they’ve never felt God being so close. I just call that being in the wild,” says Dr. Richard Hamilton, a marine scientist and director of The Nature Conservancy‘s Melanesia Program.

The Arnavons is a tiny cluster of islands in the Solomon Islands, an archipelago to the east of Papua New Guinea. They are also the South Pacific’s biggest nesting places for hawksbill sea turtles. The hawksbill is listed as critically endangered by the IUCN, one step short of being considered extinct¬†in the wild.

The Arnavon Islands played an outsized role in the history of this trade. The presence of so many nesting turtles has seen humans living in the Arnavons for at least 800 years. The British occupied the Solomon Islands in the late 1800s. Hamilton estimates that from about 1850 onwards, about 2,000 turtles per year were killed in the Arnavons alone, just to service the London fashion industry.

Their effort at conservation – simply banning visitation – was met with intense local resistance.

“It was a very top-heavy approach, with no consultation with local communities that had traditional rights in the area,” says Hamilton. He recounts how one local chief burned down all the government infrastructure set up in the Arnavons, including ranger stations, sheds for boats and turtle hatchery equipment, “just to show displeasure at not having his voice heard”. He was jailed for three years after announcing what he had done. However, that same chief would later become a staunch advocate of creating a protected area in the Arnavons. 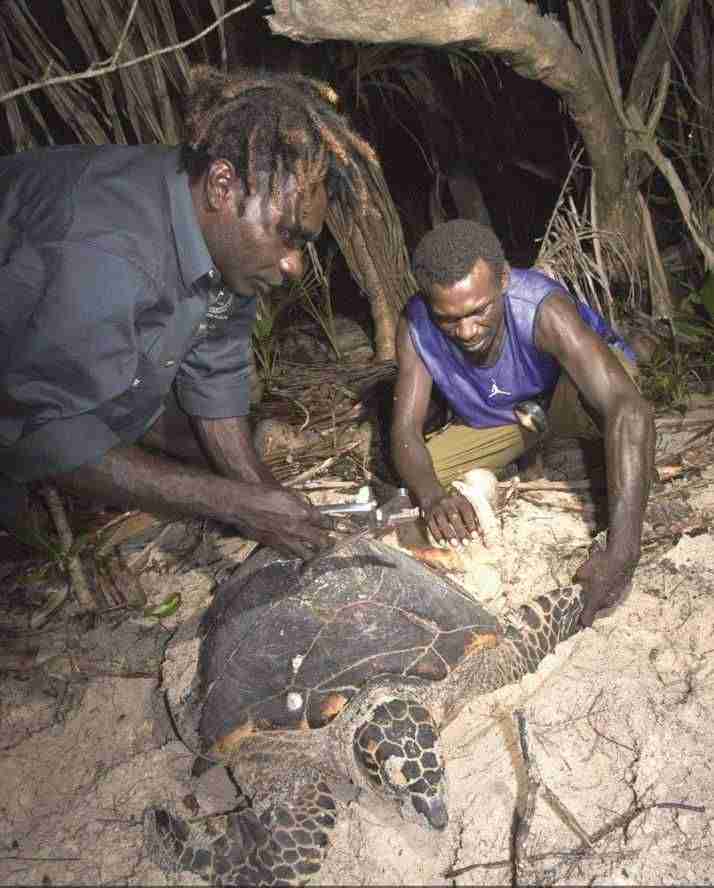 Hamilton says that another local chief, who had gone turtle-hunting in the Arnavons as a rite of passage with his father and grandfather, became an advocate for protection after witnessing the rapid decline of turtles.

Hunting through the 1980s and 90s increased in part because of the global trade in turtle shells, and also because the Solomon Islands and Fiji were among the last nations to join CITES (the Convention on International Trade in Endangered Species).

By the early 1990s, The Nature Conservancy (TNC) was convening meetings and discussions with local communities to create a community-based marine protected area to help preserve the vital rookery at the Arnavons. By that point, between five and eight thousand turtles were being killed every year in the Solomon Islands, with the majority coming from the Arnavons. 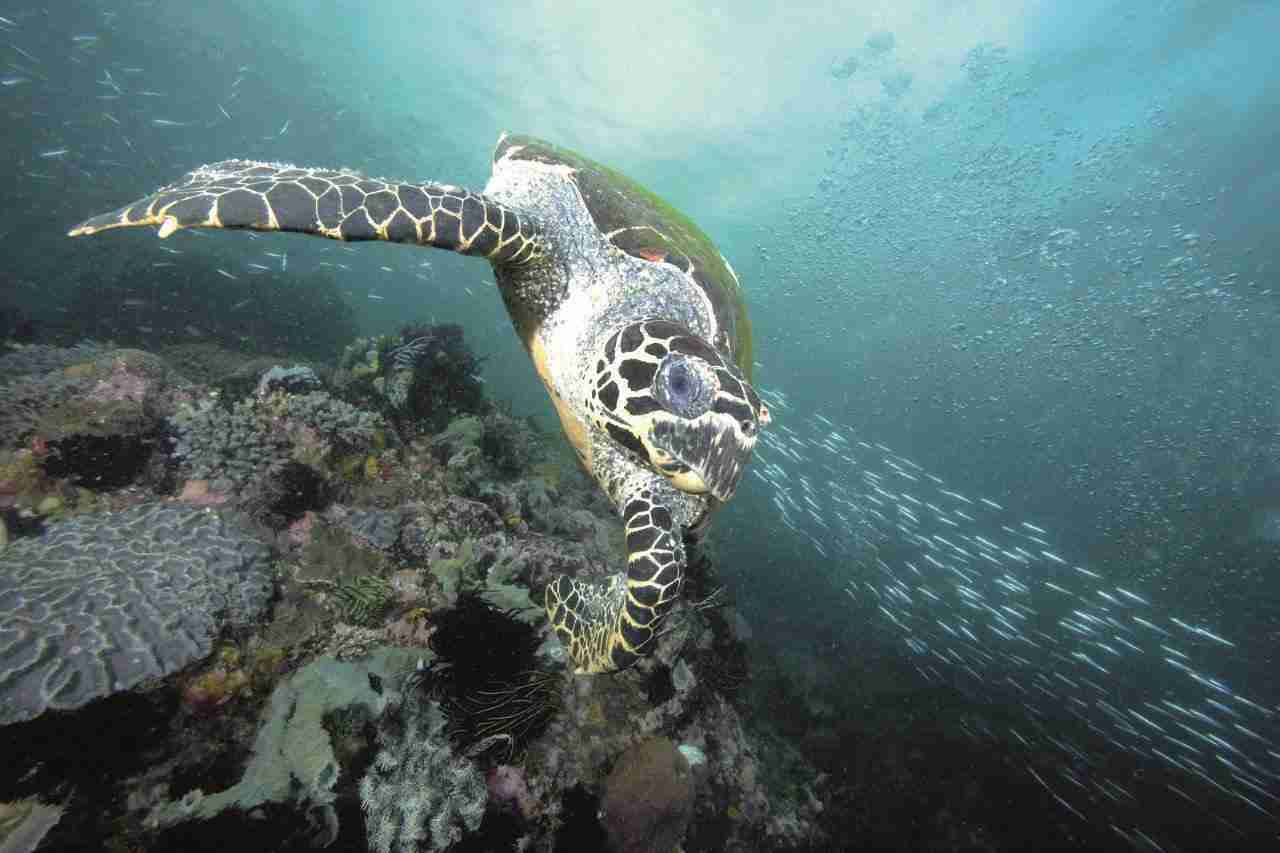 For three years, TNC, the national government and local communities hashed out their concerns in a series of meetings that were compared to courtroom dramas. The three communities bordering the Arnavon Islands – Katupika, Wagina and Kia – each had hunting and fishing claims to the area. Bringing these rivalrous communities together was a key to making the protected area work. Melanesian culture often works on consensus-building rather than majoritarian decision making, Hamilton says, ensuring that the process would be lengthy.

In 1995, the Arnavon marine protected area was established. Since then, the number of hatchlings has increased by 200%, according to field research by Hamilton and his colleagues.

“A lot of religious people who come to the Arnavons say they’ve never felt God being so close. I just call that being in the wild” – Dr. Richard Hamilton 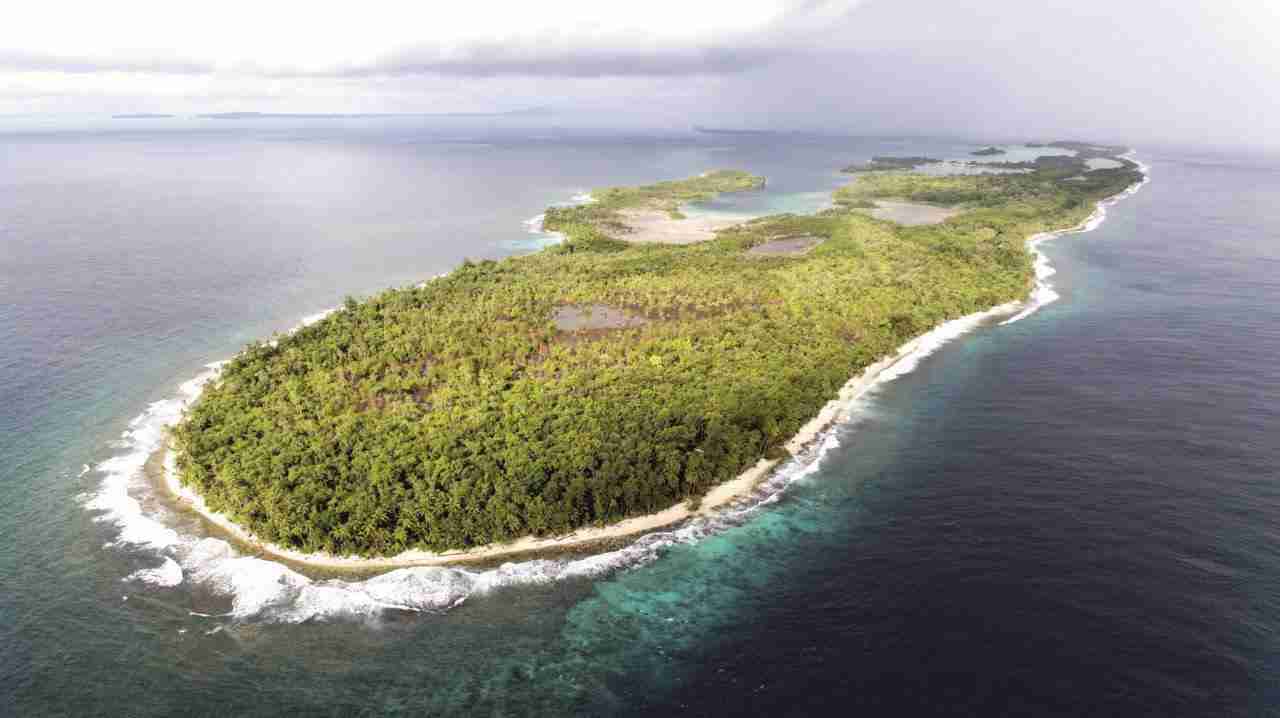 That figure could prove crucial. The protection around the Arnavons is less than three decades old, and the dividends may still be emerging. A female hatchling can take over 30 years to come back to her beach and lay up to six clutches of eggs in a nesting season. Hamilton points out that if you kill a female turtle when she first returns to her natal nesting grounds, then, that’s six clutches of eggs that ultimately don’t become hatchlings. Hawksbill turtles produce the largest clutches of all turtles, with a clutch size of up to 220 eggs.

“It’s a critical life stage – turtles are getting killed on nesting beaches where they are most vulnerable,” Hamilton adds. 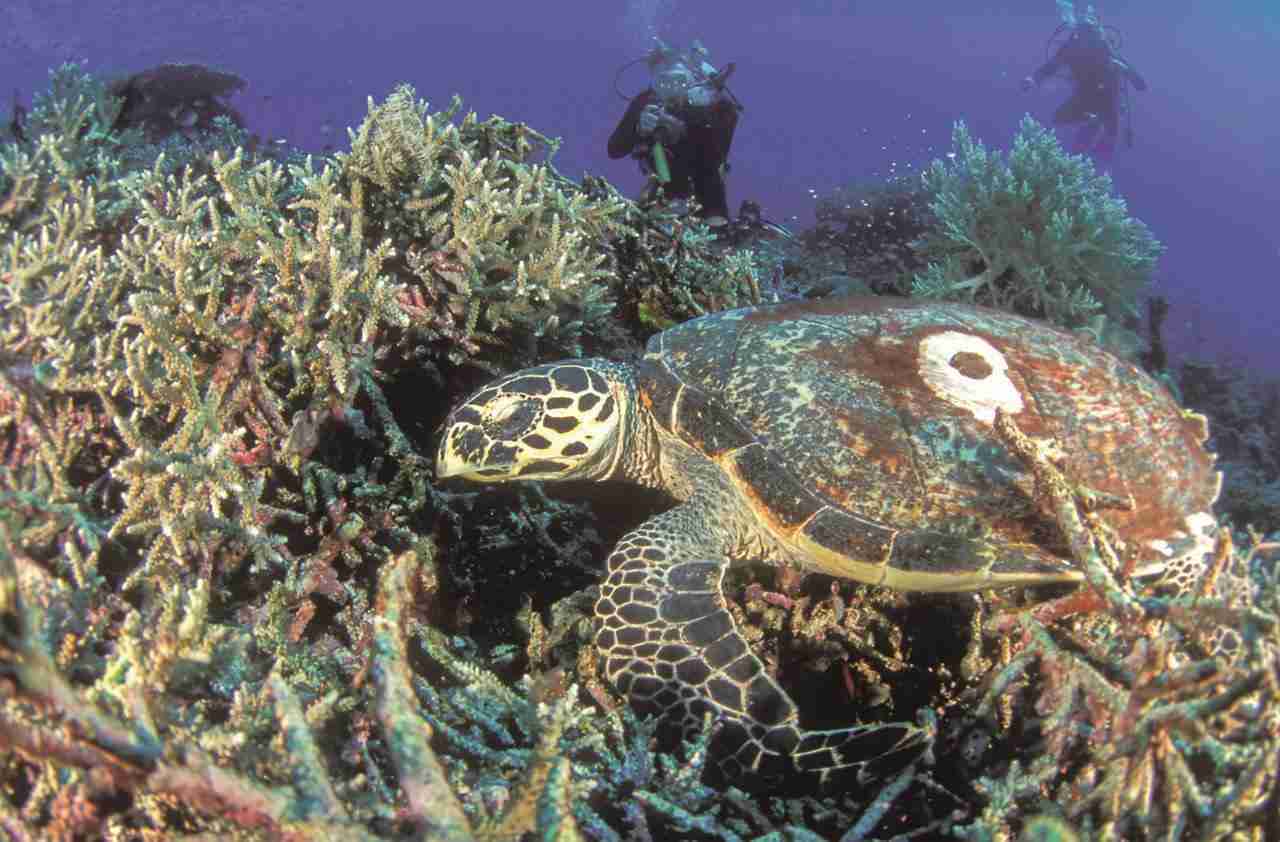 There is now an Arnavons Community Marine Park Board, which sets mandates for the park. Park rangers are drawn from the local community to stop poaching and help with research activities like tagging nesting turtles with titanium flipper tags. Rangers also jump from a boat and grab juvenile turtles that are foraging in the park and hold on while a flipper tag is attached, a process called “the Rodeo”. Rangers also work on conservation activities, like preserving nests. The islands themselves are essentially uninhabited now.

The Arnavon success story has helped the cause of marine conservation throughout the Solomon Islands, according to Hamilton. “When I got involved, I was working in the surrounding provinces. We took tribal leaders to the Arnavons to showcase what could happen.”

The three communities bordering the Arnavon Islands – Katupika, Wagina and Kia – each had hunting and fishing claims to the area. Bringing these rivalrous communities together was a key to making the protected area work 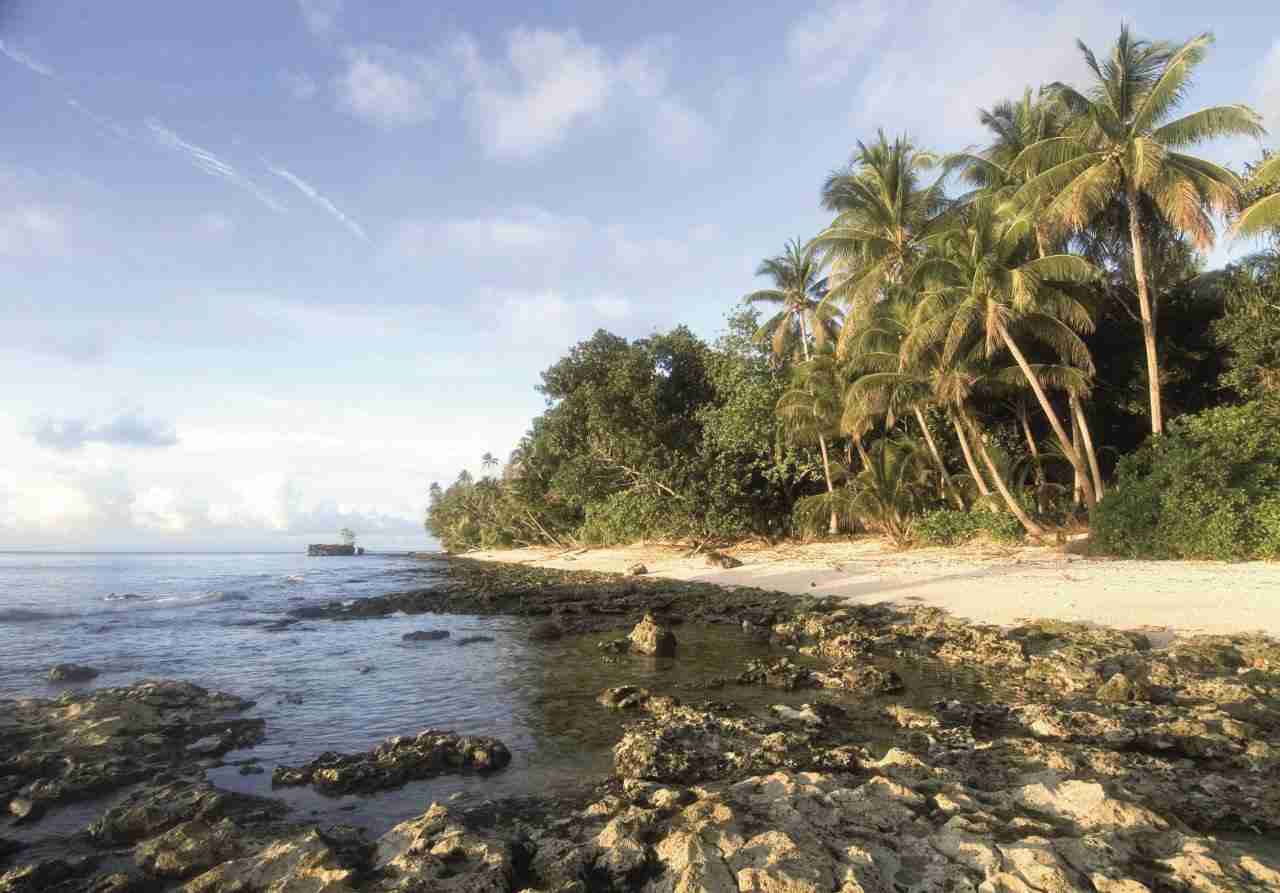 A remote spot in the Arnavon Islands 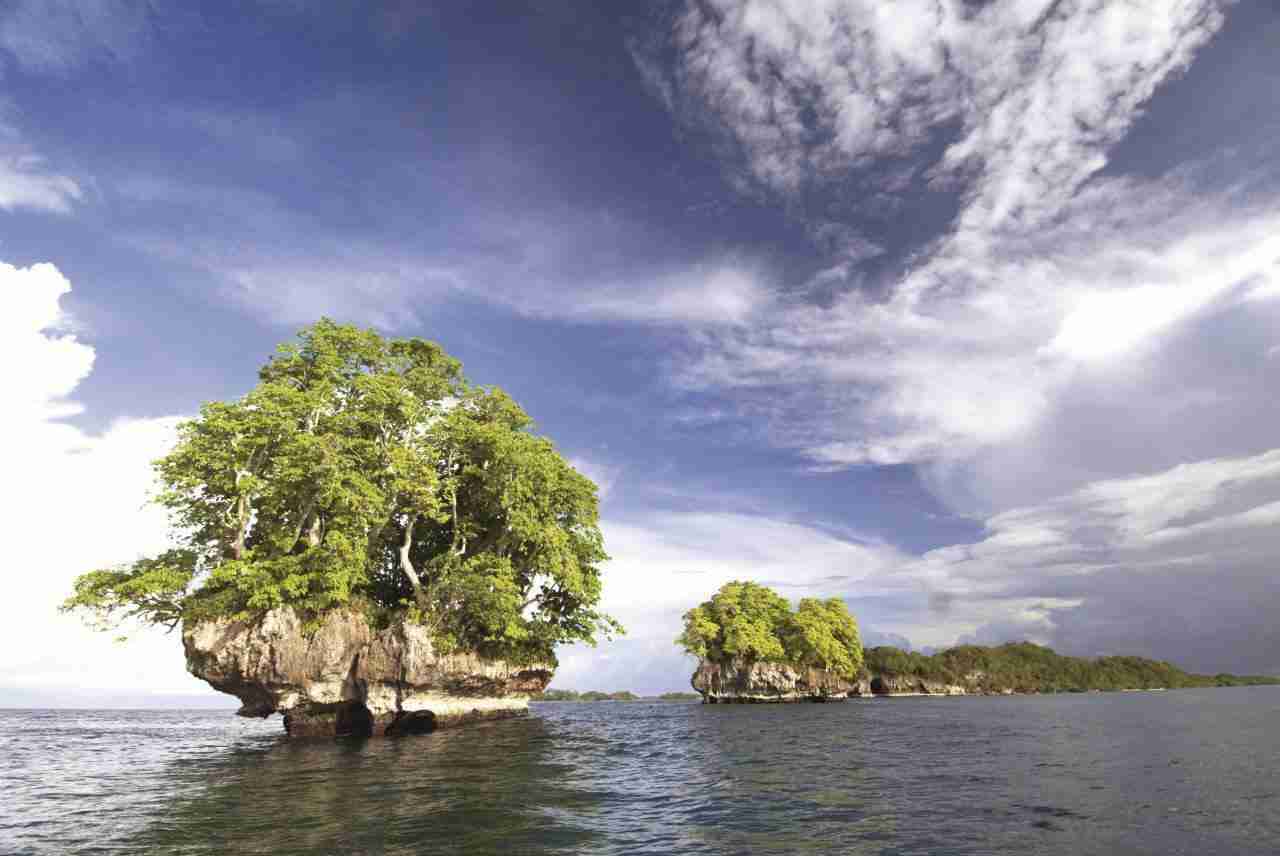 As many as 50 new conservation areas have been established, and the Arnavon Islands marine protection zone became a national park in 2017.

There are knock-on benefits of a stable turtle population and all turtle species play various roles in keeping the ocean healthy. When a coral reef suffers bleaching and starts dying back, macroalgae will get established, which prevents corals from recovering. Hawksbill turtles eat sea macroalgae that inhibit coral recovery. 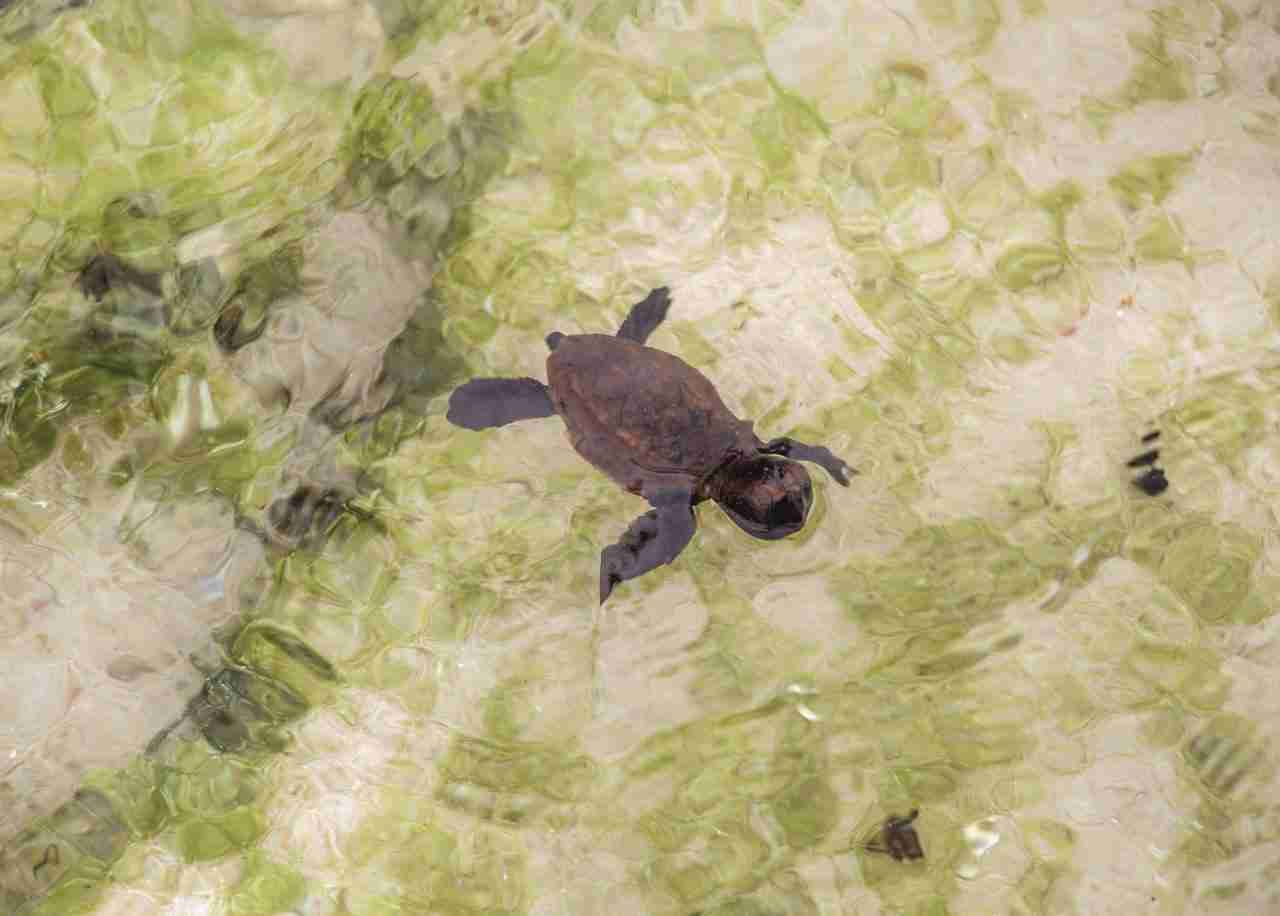 Turtles take decades to reach maturity, so the 30-year time frame of the Arnavons conservation work may only now see real results

But despite progress being made, the long-term outlook for hawksbill turtles is still tough. Hamilton estimates as many as 10,000 turtles a year are still killed in the Solomon Islands, most in small fisheries. More broadly, hawksbill turtles, which can be found around the world in tropical and sub-tropical waters, face threats from overfishing and bycatch, pollution, habitat destruction and plastics ingestion. In addition, they can migrate thousands of kilometres between nesting and foraging grounds, making conservation efforts difficult. Hawksbill turtle numbers are down about 80% from 100 years ago.

Now that the 152-square kilometre Arnavon Community Marine Park has been established, The Nature Conservancy is trying to broaden the impact of its conservation work in Melanesia by focusing more on gender inclusion. Women in the Solomon Islands have traditionally been left out of conservation policy-making and decision-making in general. This left a hole in conservation efforts in the Arnavons, as women often have their own knowledge of local eco-systems, thanks to their traditional roles of gathering food in the local environment. Yet, women were not being consulted. 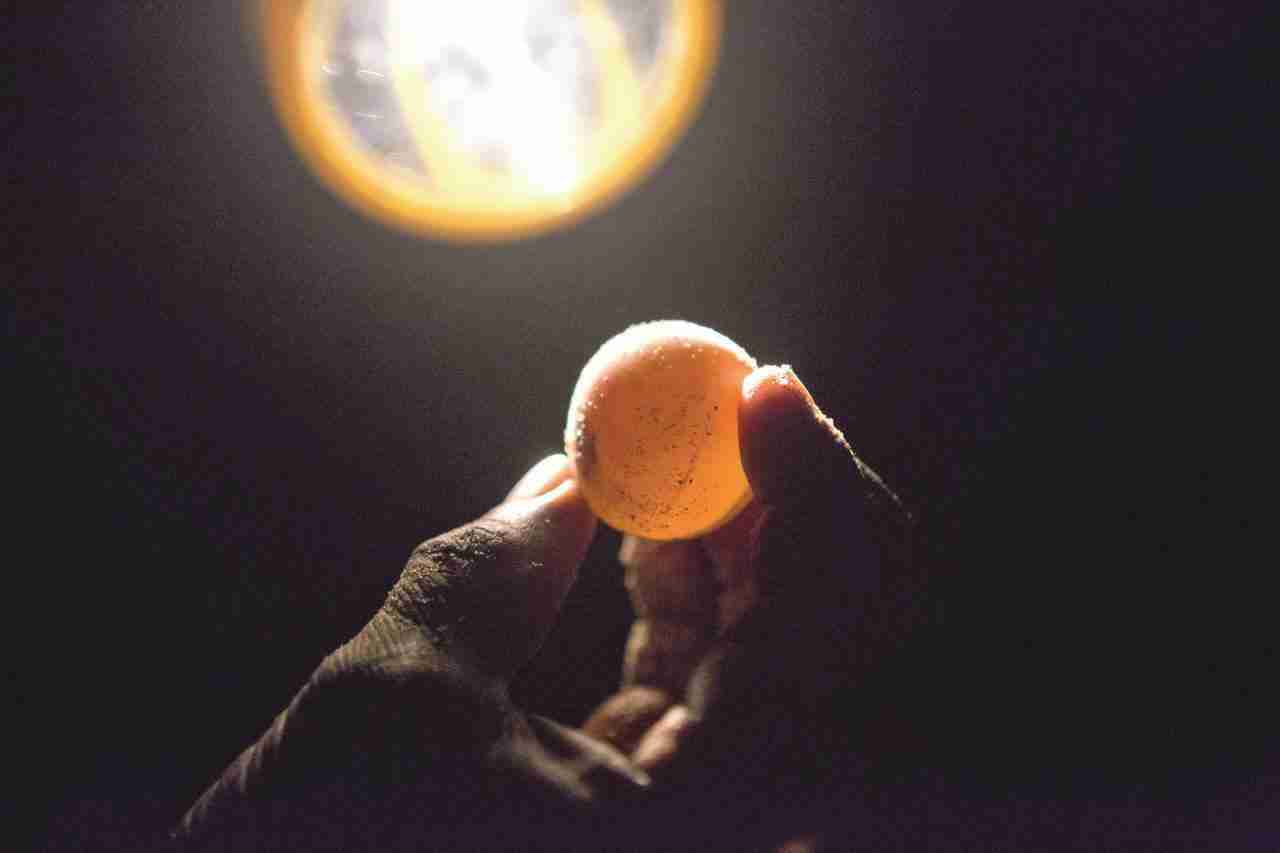 Every year, female turtles will dig 2,000 nests in the Arnavons

TNC therefore helped found Kawaki, a women’s organisation that participates in conservation and education activities. The name Kawaki draws on the first two letters of each tribal name: Katupika, Wagina and Kia. Hamilton says that TNC is supporting Kawaki with a five-year plan to establish a learning centre and lead eco-tourism to the Arnavons to help fund the park’s protection and administration.

Hamilton is also very supportive of promoting the Arnavons as a yacht and superyacht destination, calling yachts “a really great eco-tourism option.” Monaco-based superyacht brokerage and charter house Yachtzoo already lists the Solomons as a destination. 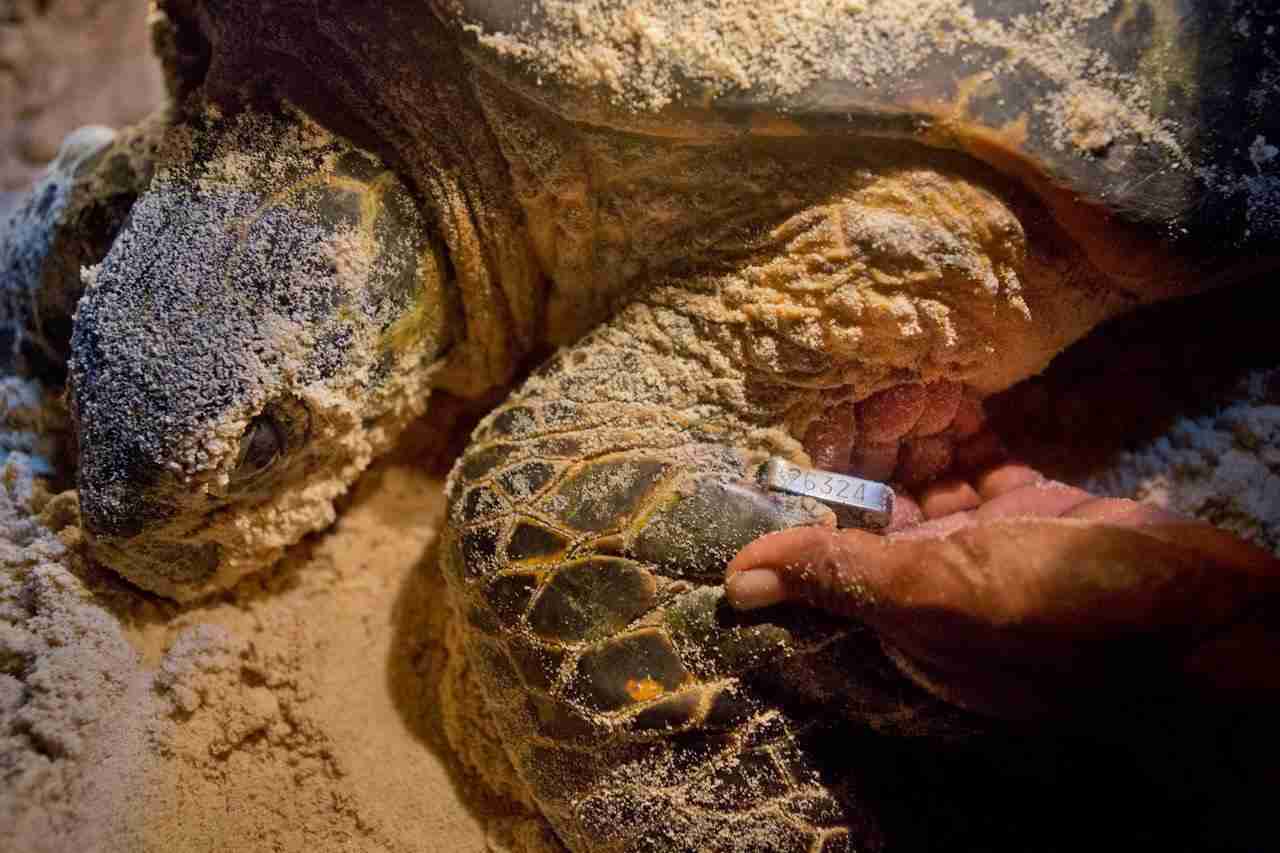 Eco-tourism or marine tourism is coming into focus as a way for conservation groups to help make range patrols, anti-poaching efforts and other conservation efforts permanent and self-sustaining.

Hamilton, who grew up in Melanesia, says that yachties from Australia were among the first outsiders to visit the Arnavons over 20 years ago. Growing yacht and superyacht visits could be an essential part of the conservation story for the Arnavons in the years to come, and TNC is working with Kawaki to develop the infrastructure needed to encourage such visits.

Hamilton says that TNC even helped Heritage Expeditions and Luxury and Expedition Cruises get their small, expedition-oriented cruise ships, with around 100 passengers, into the area. These large vessels would anchor away from the islands, and guests would come ashore on tender boats.

Hamilton, who grew up in Melanesia, says that yachties from Australia were among the first international tourists to visit the Arnavons over 20 years ago 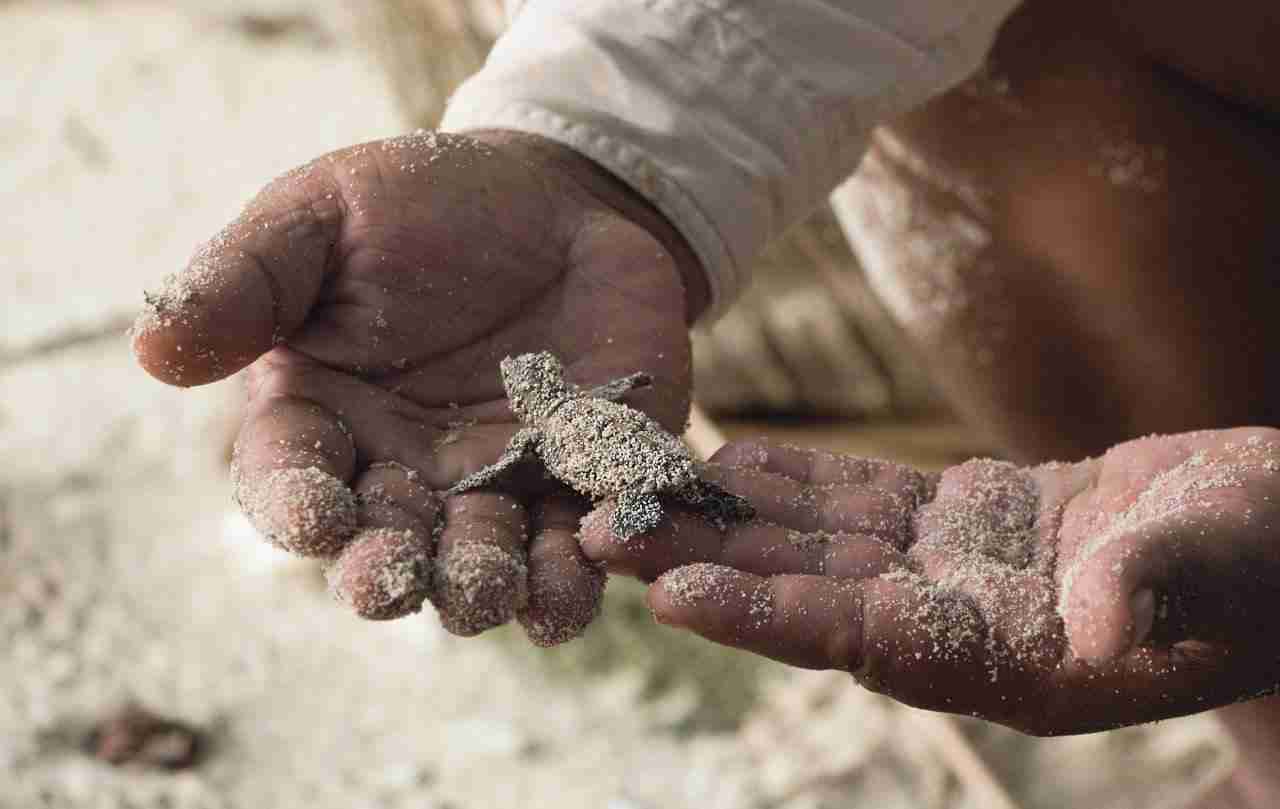 The aim of creating a yachting destination on the back of the Arnavons’ turtles is in the earliest possible stages, and the impact of Covid on tourism has thrown many business plans into disarray.

If yacht owners of all stripes wind up visiting the jewel that is the Arnavon Islands, they must contend with limited infrastructure. However, yacht owners can contact The Nature Conservancy to help plan a visit to the Arnavons. Thanks to the protections offered by the park, there is marine biodiversity, fantastic diving, cultural heritage sites and great fishing (subsistence only). Hamilton says that owners can even arrange to join the rangers on their patrols or participate in conservation activities. And there are¬†turtles!

“It’s pretty magical. Turtles nest there all year round, which is unusual. If you’re on a yacht and you’re there for a few days, you really can’t not see the turtle hatchlings.” 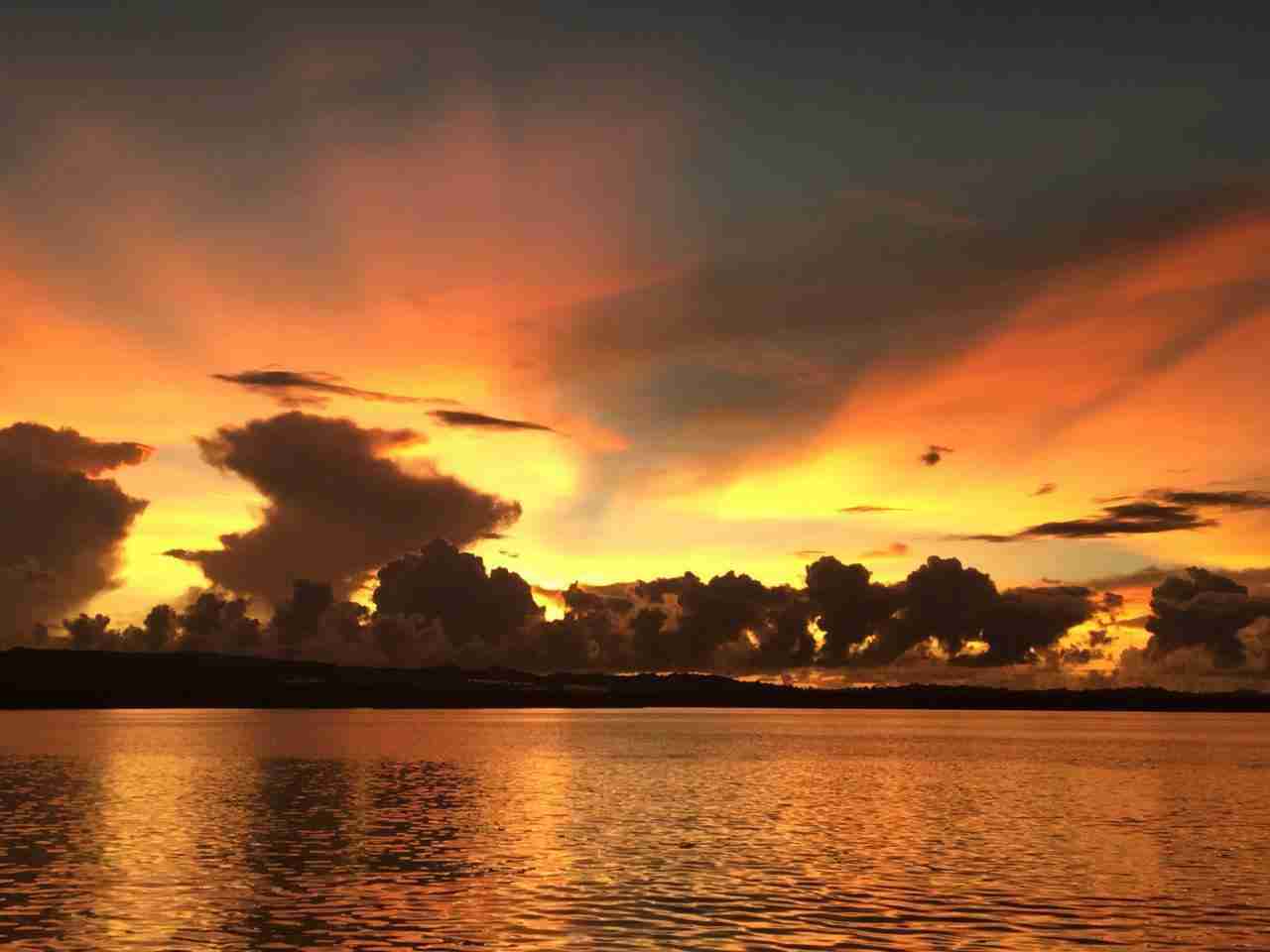 Tourism industries have been heavily damaged due to Covid-19. This has also badly impacted marine conservation efforts that depend on tourism and yacht visits to help sustain local conservation. Vaccination efforts are rising around the world, hopefully allowing a reopening of international travel.

Future visits by expedition-style cruise ship can be arranged with the following companies:

To plan a yacht visit, Dr. Richard Hamilton recommends visiting www.arnavons.com and checking out “More Information”, where relevant contact details can be found.