Angela Pennefather, a native of Papua New Guinea, provides guiding and provisioning services for visiting superyacht owners and guests. She says that the time to explore the island nation's diverse array of cultures and colours may soon be ending 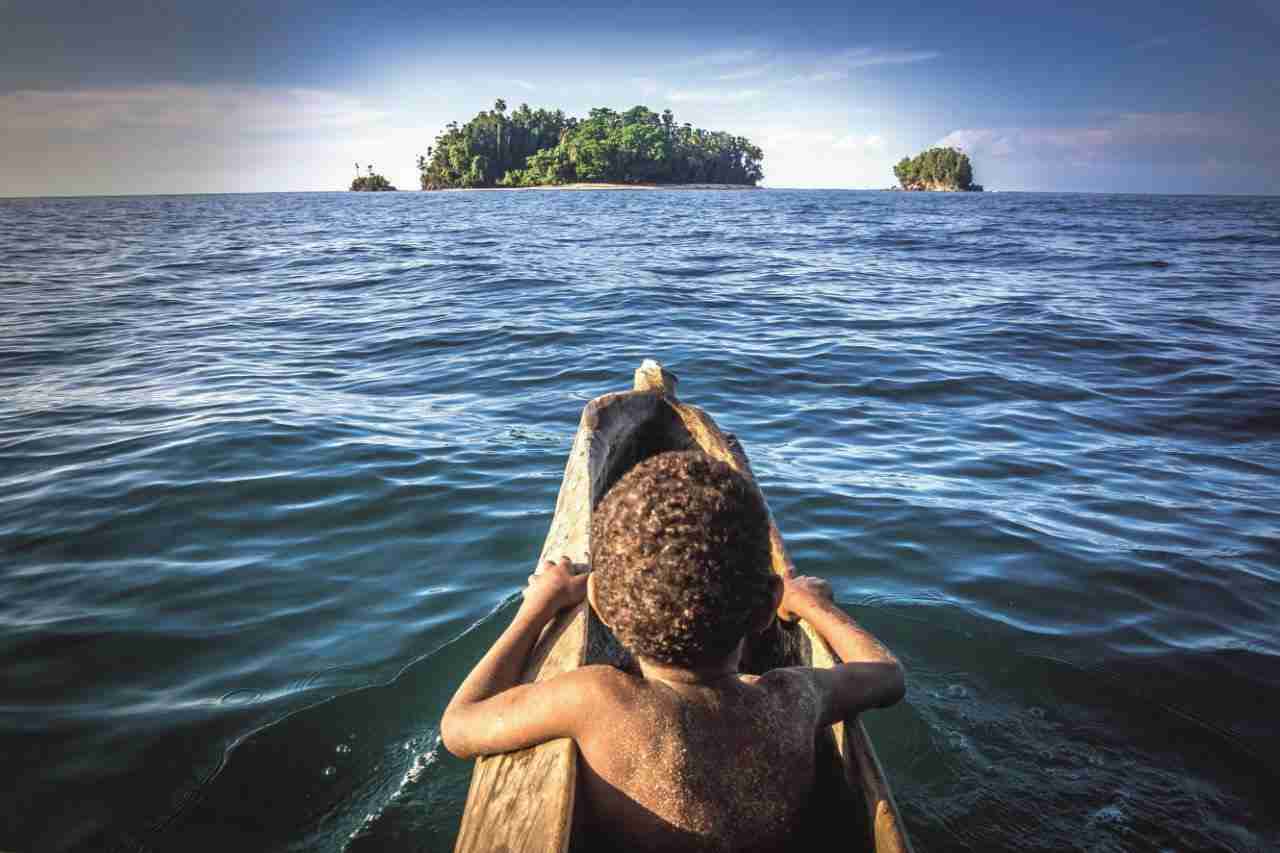 Yacht owners in search of adventure and local cultures untainted by tourism had better hurry to the islands around Papua New Guinea. A land that is commonly associated with photos of vividly painted Melanesian men and women in tribal costume is now seeing more mobile phones arriving, and that, according to Angela Pennefather, is doing a lot to dilute traditional culture. Pennefather, a former superyacht chef, is the founder of Melanesian Luxury Yachts and a guide for Eyos Expeditions. She has spent the last eight years helping superyachts and their guests find their way around the wilds of Papua New Guinea (PNG) and the surrounding islands. Pennefather’s mother is Melanesian Papua New Guinean, and her father is Australian. Born of two cultures, Pennefather decided to put her background to work on behalf of superyachts. She says that she guided four superyachts in her first year, and before Covid-19 spread around the world, she was due to guide over 20 superyachts. It is not surprising that PNG is drawing more superyachts. The island nation is part of the Coral Triangle – a marine biodiversity zone that stretches from PNG westwards across parts of the Philippines and Indonesia, thus offering pristine seas teeming with life. There are tremendous landscapes and volcanic islands. Papua New Guinea is home to tropical rainforest, mangroves and estuaries, forested highlands and alpine terrain, supporting an incredible array of plants and animals. 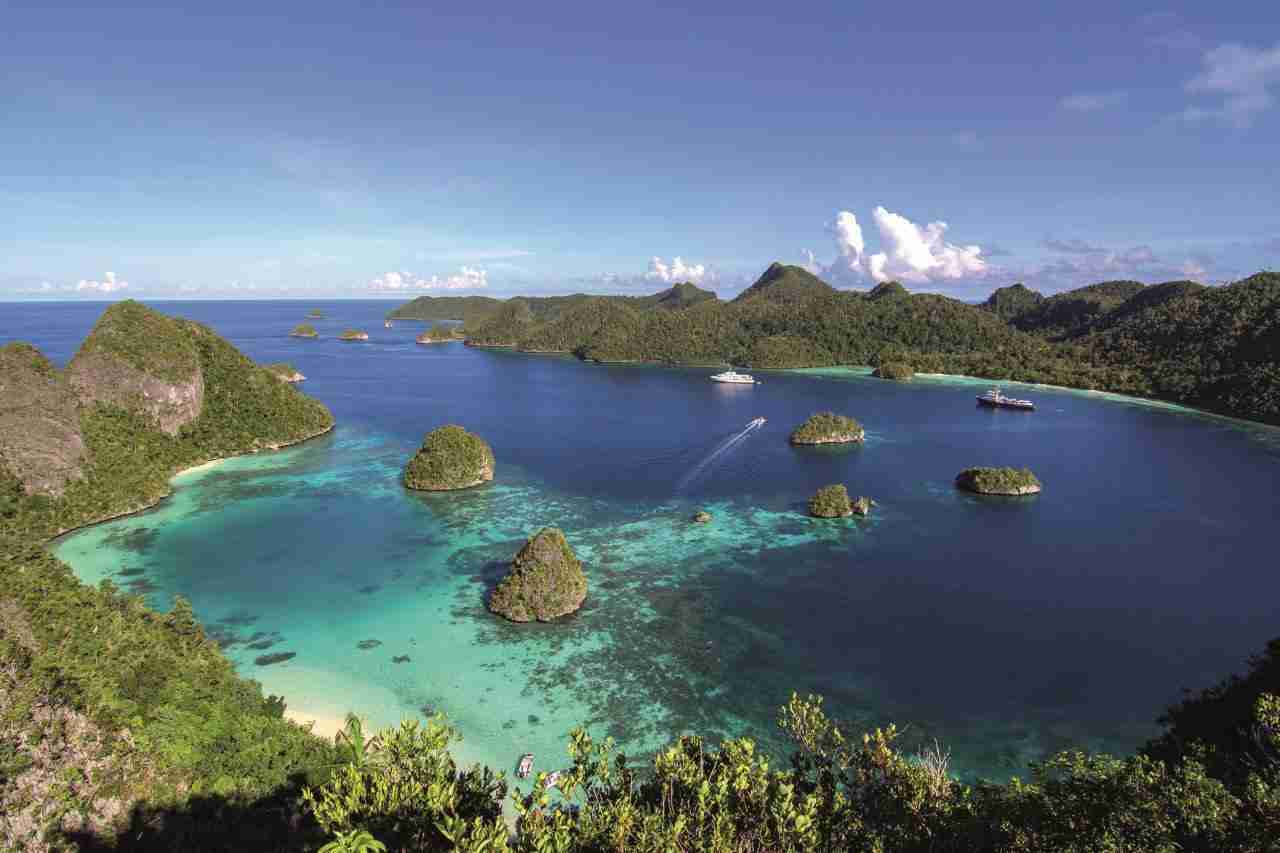 “I always say to my clients: start in Fiji, which gets you ready for Vanuatu. That gets you ready for the Solomon Islands, and once you get comfortable there, I’ll take you to your graduation place – Papua New Guinea,” Pennefather explains. The small but growing superyacht traffic into PNG is due to the growing number of yachts sailing into the South Pacific. 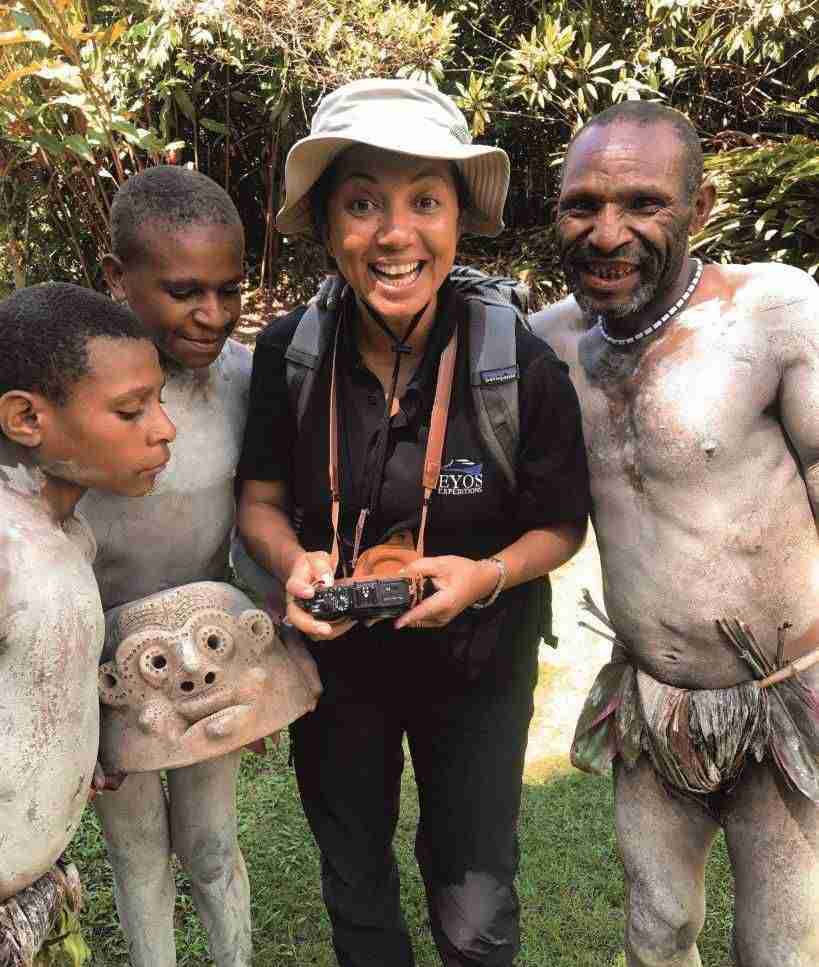 But for Pennefather, the real draw is the culture. “You get a taste of humanity. People find it intriguing because you get on a 100-metre yacht, with all the bells and whistles of privilege, and you wind up sharing a coconut with a 10-year-old boy on a canoe. In that moment, you are the same, you share something, and there is no divide. It is not scripted. And if they’ve got a heart, then people will respond to that.” PNG was first settled over 40,000 years ago, with tribes forming in remote locations. It is home to over 800 distinct languages, making it the most linguistically diverse country on Earth. “The significance of this is that PNG is a nation of nations,” says Pennefather, who speaks one local language as a mother tongue and can converse in a couple more. “We identify with our tribe strongly. In a cruising experience, you can travel 100 kilometres down a coastline, and you are operating with a different set of rules than in the previous village.” 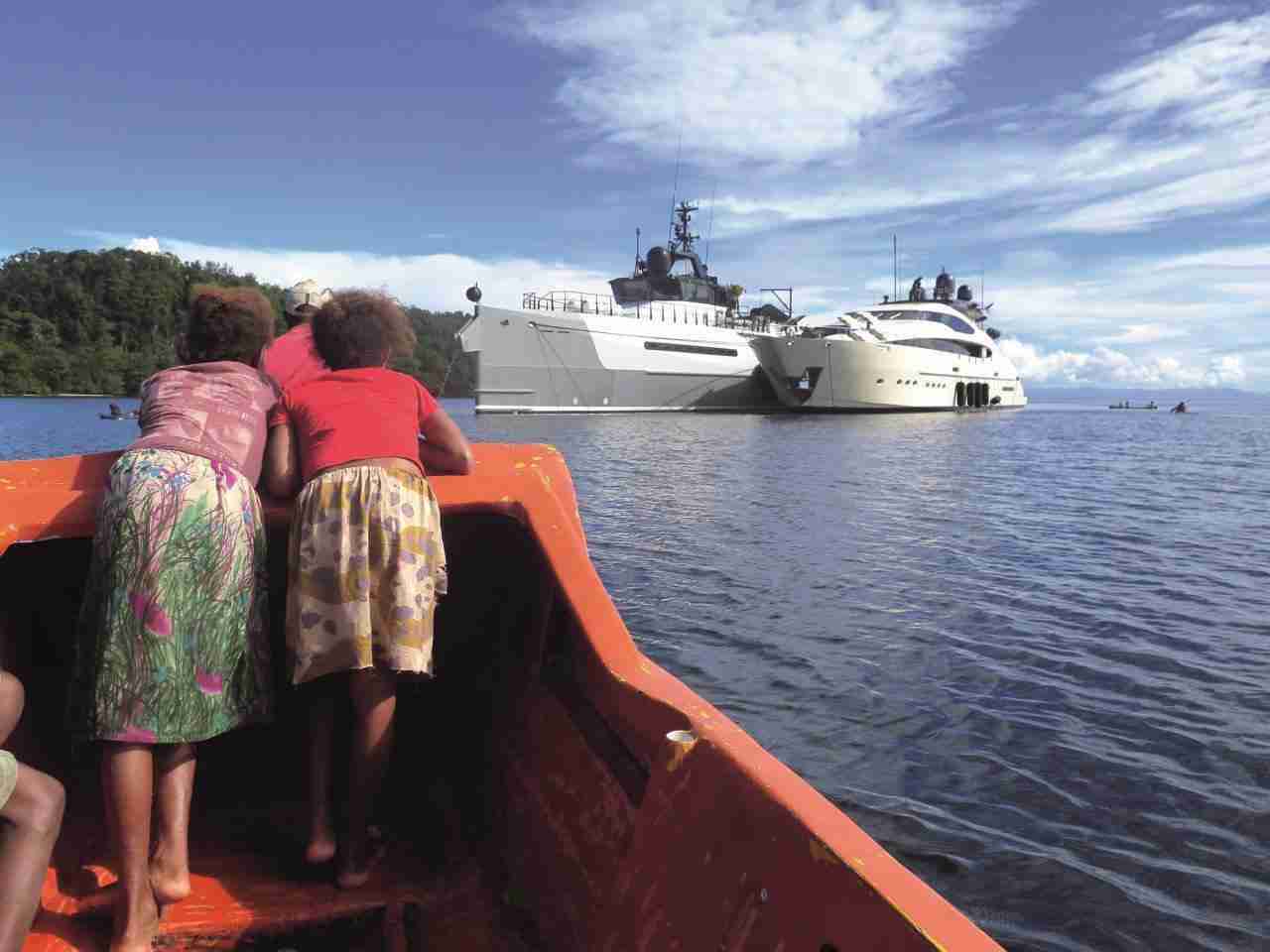 Visiting superyachts are sure to attract plenty of attention

Observing local traditions and rules is critical to a rewarding journey, but it can be easy for superyacht crew and guests to forget how vast the divide is between guest and local. The arrival of a superyacht near a coastal village is akin to the arrival of an alien spaceship in your front yard, Pennefather says. “You come to a village on a superyacht that has an outdoor cinema and jet skis. Some waste food‚Ä¶ and there are [food] scraps that can get thrown overboard, and a child from shore might jump in to grab a leg of lamb bone – because they often don’t see protein like that.” What mystifies many local PNG people is the concept of leisure, which does not really exist for people in developing countries, Pennefather says. She notes that local people are astounded to see fuel being burned for no practical reason other than to have fun. 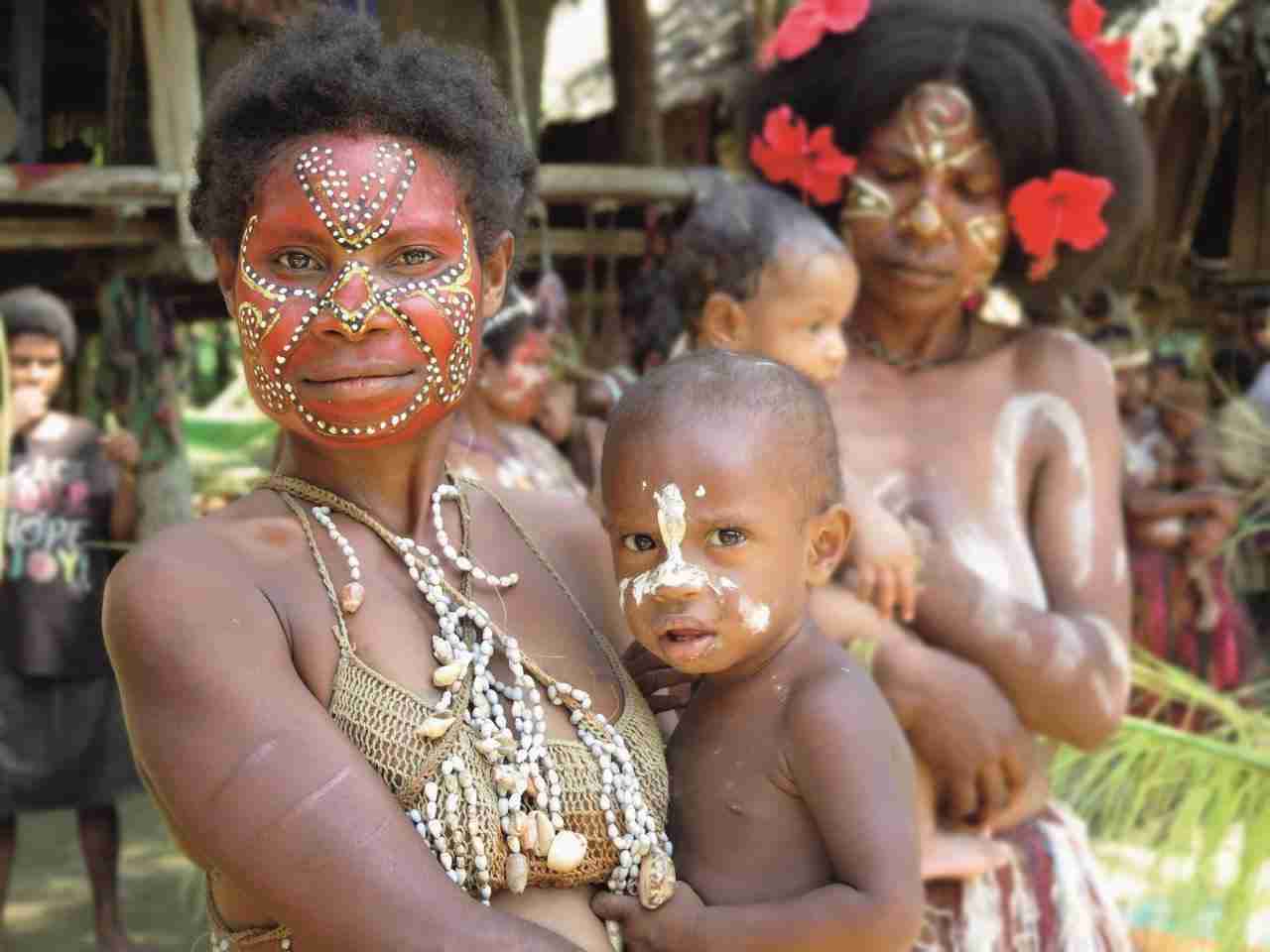 Some aspects of PNG culture are being lost down the generations

The other key point that Pennefather wants to get across is that over 90 per cent of PNG land is private, in the sense that a local tribe governs it. In Mediterranean countries, a superyacht need only get the necessary paperwork to cruise, and it may anchor anywhere an owner pleases. But in PNG, local tribes need to either be paid or come to an understanding for a yacht to drop anchor peaceably. Pennefather relates how one superyacht guest in PNG about to go paddleboarding wanted nearby canoes full of tribesmen to go away before she would do so. The guest could not understand why the canoes would stay, Pennefather says, making it difficult to keep both parties happy. Sadly, a big issue that comes up for superyachts in PNG is local suspicion. Resource-rich PNG has been the target of mining companies and logging firms, and the results have often not been good for local people. Pennefather says that some tribes are concerned that a superyacht may be connected to a mining company or even be part of a navy, since nobody can fathom that such a vessel would only be there for leisure. 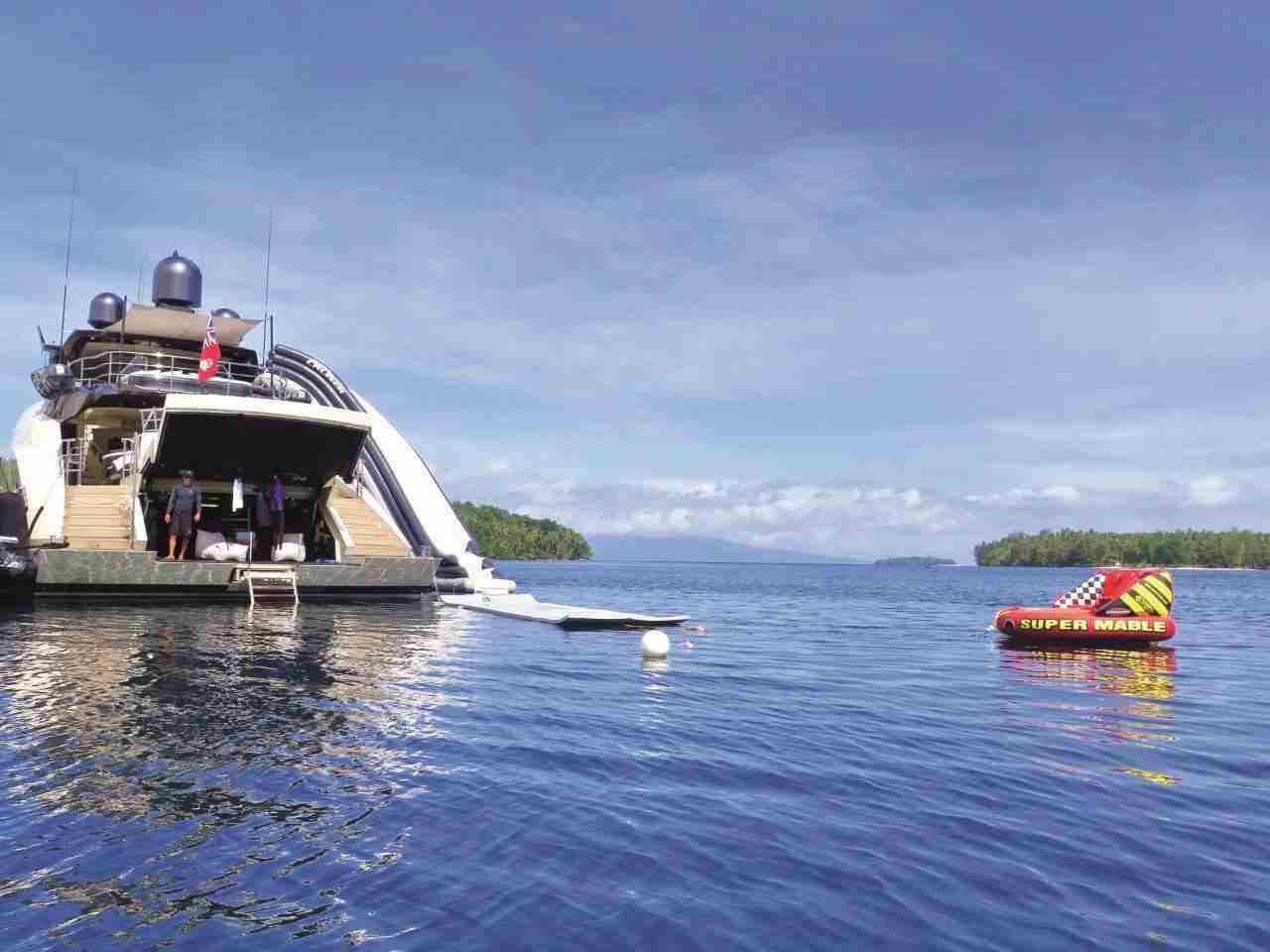 A superyacht sets up

The submarines that some superyachts now carry as toys can also elicit suspicion that they may be part of an undersea mining operation. It all stems from the fact that local tribes cannot understand why a superyacht exists merely for recreation. Pennefather sighs at the thought of a submersible. “How am I supposed to explain to someone who trades coconuts as currency that this [a submersible] is just [used] for pleasure?” All that said, superyachts were finding their way to PNG, and until Covid arrived, interest was rising, in part because so many owners are keen to experience cultures that still retain their traditional roots. Melanesian cultures venerate the elderly, and funerals for the elderly tend to be elaborate and lengthy affairs of far greater significance than weddings. The elderly are storytellers who pass on history and knowledge, for there is no native writing tradition among the tribes of Papua New Guinea. 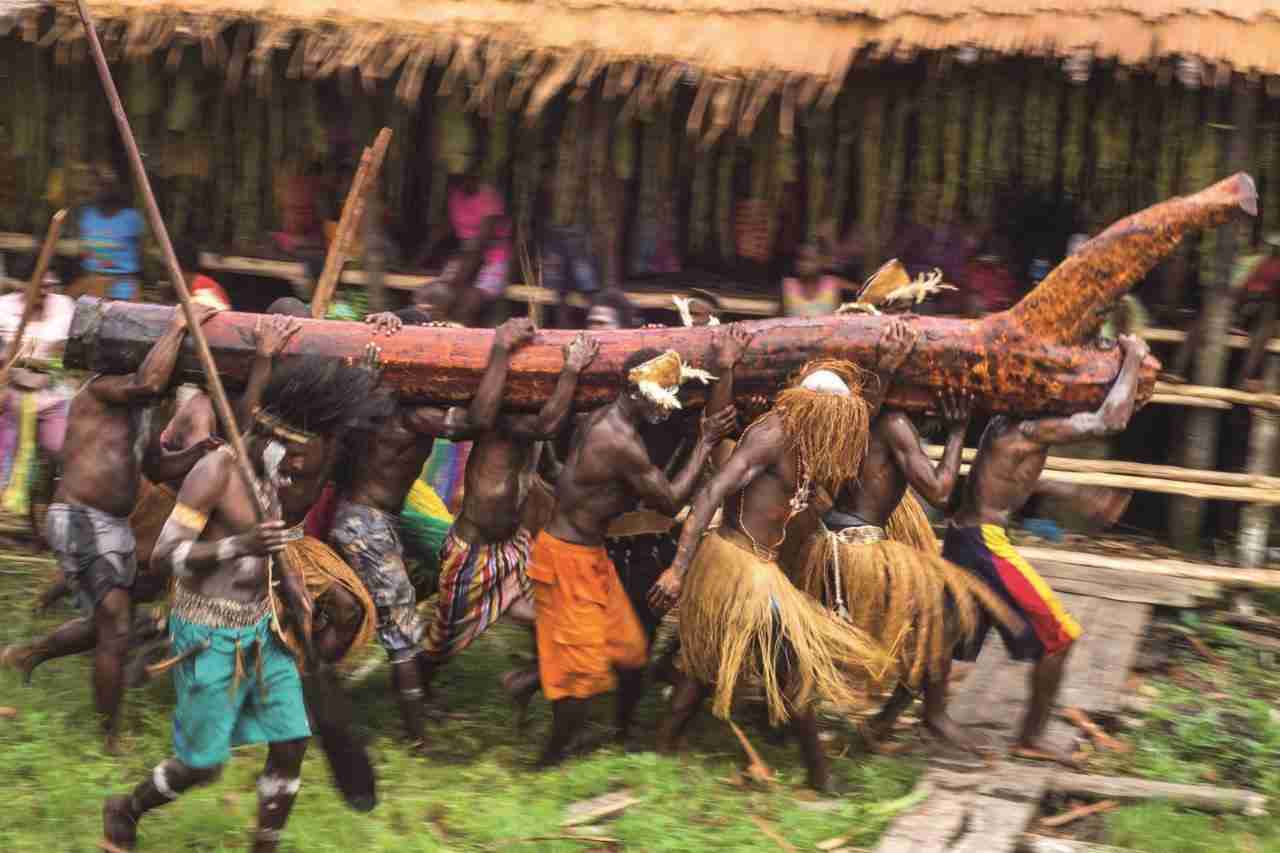 Logs are carried during a traditional ritual

Pennefather says that one of her favourite ritual ceremonies in Papua New Guinea is the ‚Äòhouse cry’, a traditional family get-together after the funeral of an elder. Once the burial procession is complete and the guests have left, a symbolic house is built in which the family gathers. There, family members vent their complaints and frustrations with other family members. It may even get confrontational. But when it is done, the symbolic house is dismantled, and the family can go back to their regular lives. “We start again. It’s that new life thing,” she says.

Pennefather says that one of her favourite ritual ceremonies in Papua New Guinea is the ‚Äòhouse cry’; a traditional family get-together after the funeral of an elder

Superyacht owners and guests often come to witness ceremonies and rituals, and Pennefather now arranges for guests to see them ahead of time with local tribes. It is still possible for visitors to see unscripted rituals and get a true sense of the varied cultures of PNG, but that time is passing, Pennefather warns. “With the intro of cell phones in the last ten years, I’ve seen a massive difference,” she says. “These are dying cultures. Especially the beautifully coloured ones in the highlands. Even in the most remote places, people now have cell phones.” Young people, who are at the bottom of the traditional social hierarchy in Melanesian cultures, are now turning to their phones rather than their elders. One research agency noted that mobile coverage in PNG grew from less than three per cent of the population in 2006 to over 80 per cent by 2016. It has risen further since. One company, Digicel, has over 90 per cent market share in digital communications here. “The elders say that their kids are not interested in doing ceremonial rituals anymore,” Pennefather says. “They don’t see the value in it anymore, being initiated or being a dancer or hunter.” 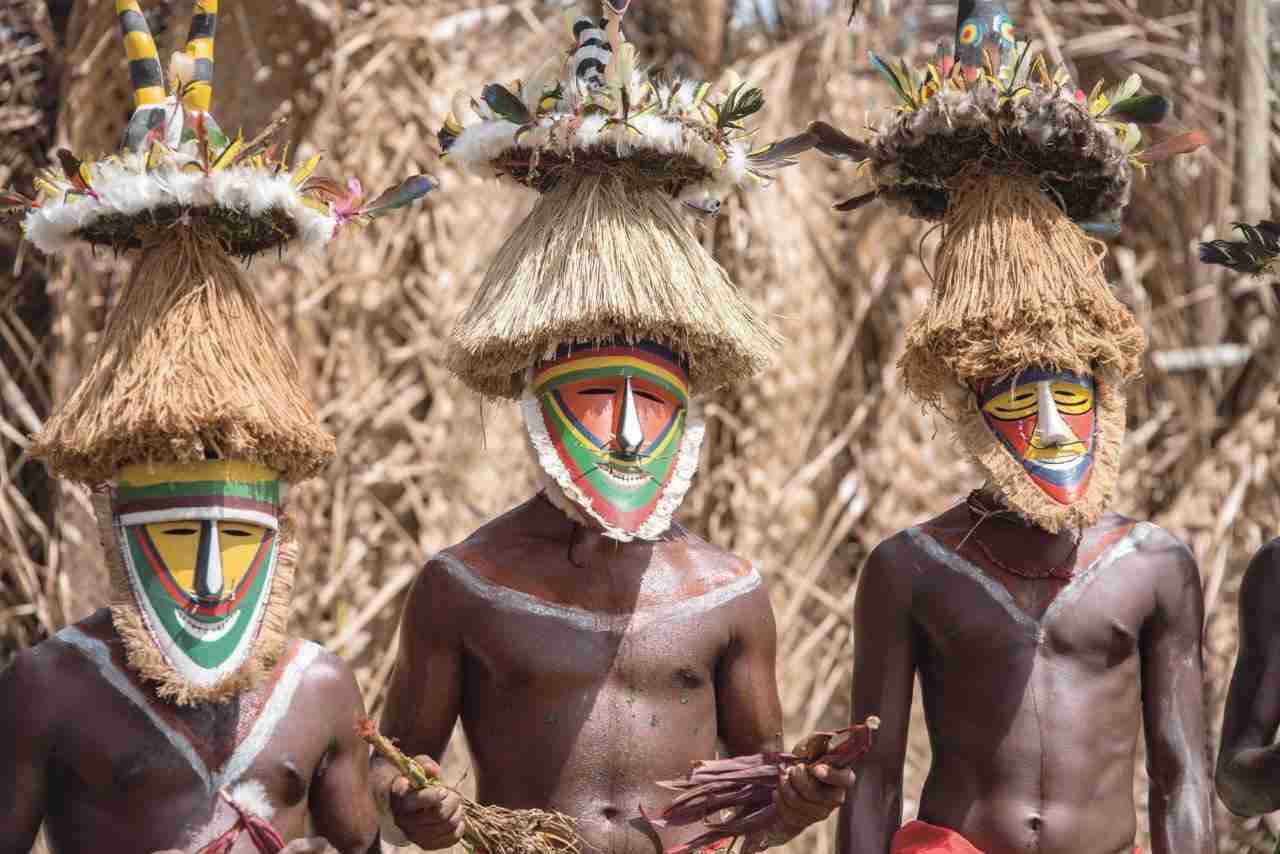 Tribal culture on display at the National Mask Festival in Rabaul

For that reason, Pennefather adds that it is an interesting time to travel the region. Some parts of traditional culture have been lost already or become very diluted. But she says there is still time to see it all. Sadly, the Covid-19 pandemic has recently hit PNG; vaccination rates are very low, and the Delta variant surged. However, outlying islands remain relatively unscathed, according to Pennefather. PNG did open up to vaccinated business travellers, but not to tourism or superyacht guests yet at the time of publication. Pennefather is hopeful that by early next year, PNG will allow vaccinated guests to arrive. And with any luck, they will be able to get a glimpse of a traditional life lived before mobile phones – before it is lost forever.

The Solomon Islands: An oasis for turtle hatchlings

The Solomon Islands, one of the remote nations of Melanesia, is home to a tiny clutch...