Indonesia remains one of the world’s greatest yacht destinations. Its promise is only beginning to be realised, as tourism tentatively returns following the easing of Covid restrictions

Indonesia is a yachting destination that has been on the rise for years. It is easy to see why. The archipelago has 17,000 islands, with everything from well-known tourism hubs to far-flung uninhabited islets. Indonesia is also an Asian cultural melting pot, and it is renowned for its biodiversity.

In normal times, the country is open to foreign yachts and owners. Paul Whelan, Indonesia country manager for Simpson Marine, says that visitors can apply for a three-year cruising permit, and foreign yachts can enter and exit the country through one of 93 designated ports. Yacht owners often commence their journeys through Indonesia in Bali, an established base for superyachts, or Jakarta, the current capital. Benoa Harbour – located south of Bali’s capital city Denpasar – hosts Benoa Marina, which can accommodate up to 25 yachts, including four superyachts. 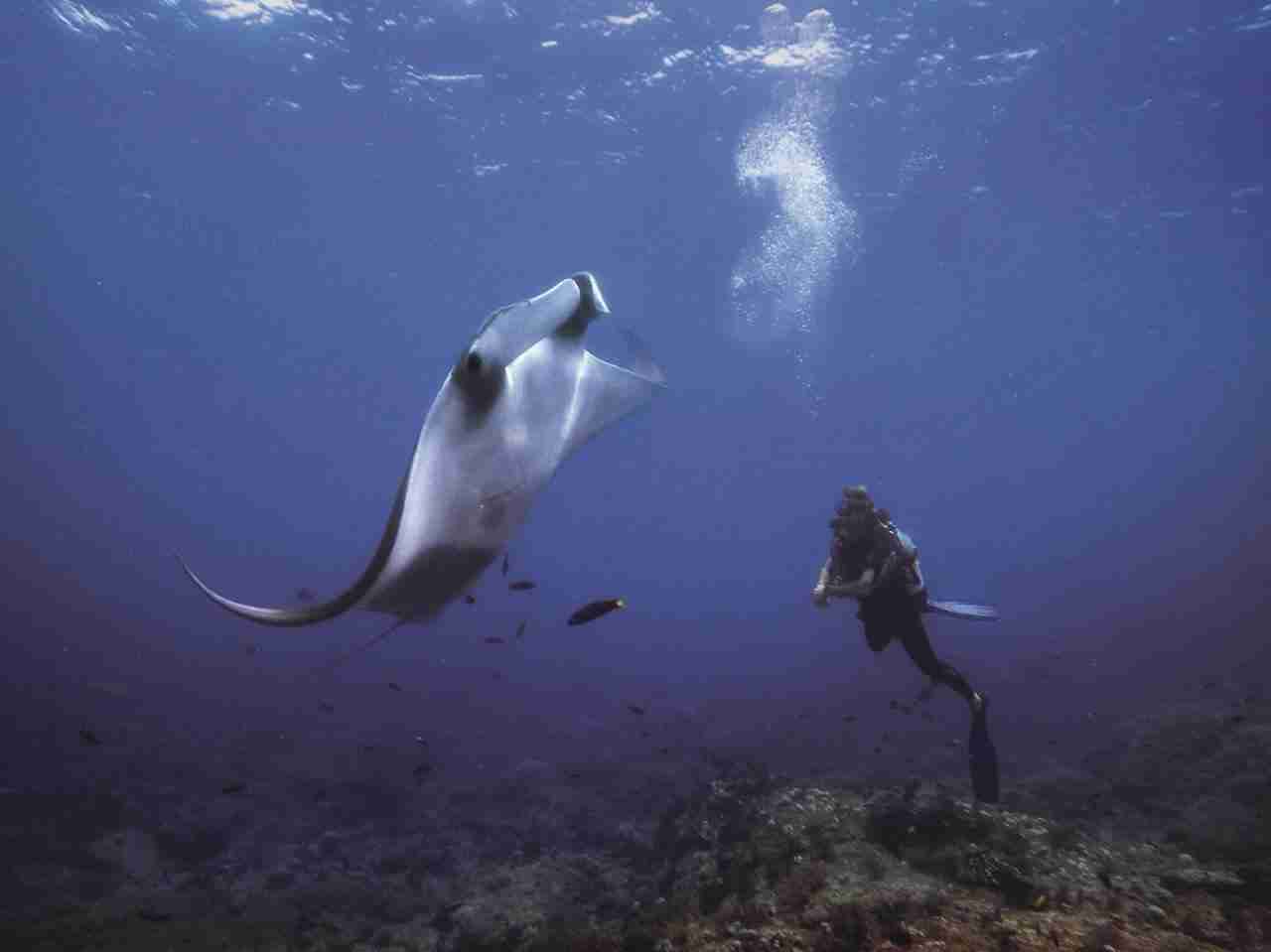 The waters to the south and west of Bali are exposed to the open ocean, creating the potential for tougher sea conditions. Conditions are generally calmer to the north and east. nearby diving hotspots such as Nusa Penida, an island about 15 nautical miles off Bali’s southeast coast, within eyesight of Benoa Marina.

With stunning underwater visibility and pristine coral-reef cover, the ocean surrounding Nusa Penida is filled with species such as manta rays and bony mola-mola fish. Bali is a Hindu-majority province, home to a multitude of temples. The local cuisine is inspired by indigenous Indonesian, Chinese and Indian influences, with delicacies such as babi guling: roast suckling pig. 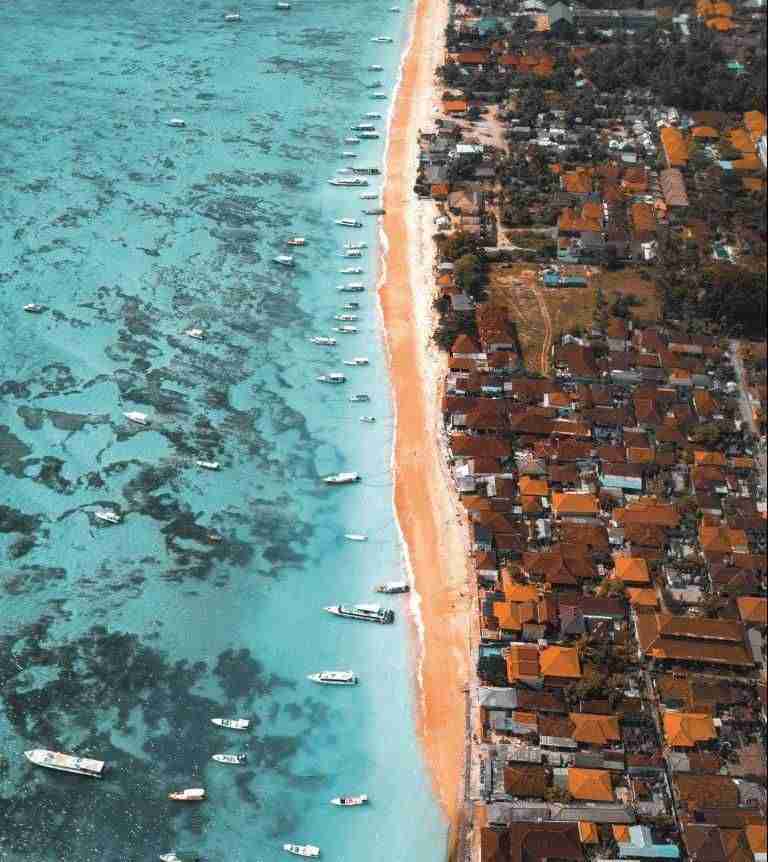 The coastline of Nusa Lembongan, an island southeast of Bali

From Bali, boaters can provision their yachts to explore the rest of Indonesia. The routes they take depend on Indonesia’s unique climate. “Generally south…along the eighth Parallel is best from May to September, with the north being best from October to April,” says Richard Lofthouse, general manager of Catalano Shipping Indonesia, a superyacht services agency. This means that yachters from Bali generally travel along the eighth parallel south.

Weaving their way past the Gili islands and the picturesque jungles of Moyo Island, the passageway from the island to Komodo National Park in eastern Indonesia is becoming increasingly prominent, according to Oceanic Escapes sales director Dik Halman. With some of the most coveted cruising grounds in the world, calm waters give way to pristine dive sites, such as the famed ‘Manta Alley’. 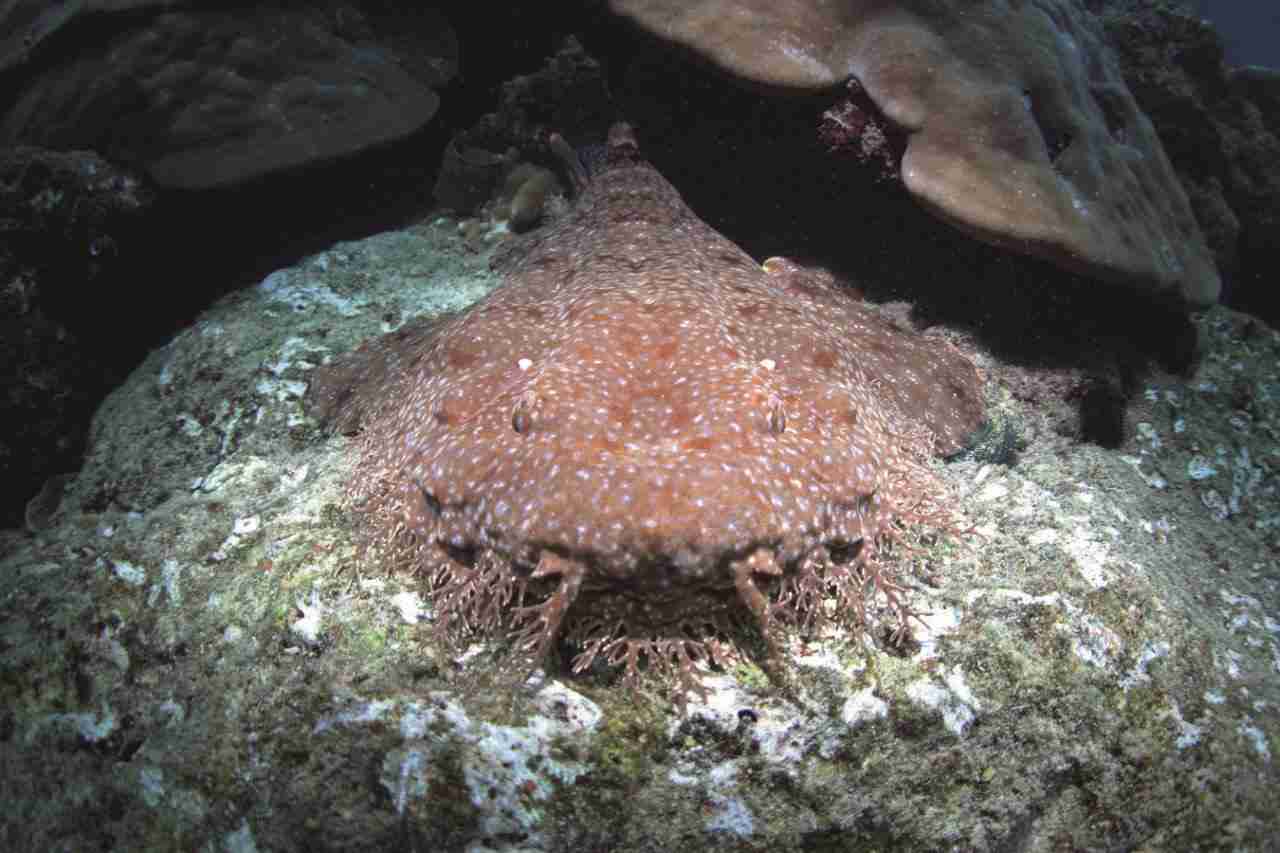 It’s not surprising that these diving sites draw so much attention. Alongside other eastern Indonesian destinations such as North Sulawesi, the Banda Islands, and Raja Ampat, Komodo National Park is part of the Coral Triangle: a marine area covering six countries and over 600 species of corals. Komodo National Park, a Unesco World Heritage Site, is home to hundreds of coral species and tropical fish.

Further inland lie pink sandy beaches and grassy hills that lead to isolated local villages. Komodo Island itself is home to the famous Komodo dragon. These reptiles can reach up to three metres in length and often weigh over 80 kilograms. While the dragons can show bursts of speed, they tend to kill by letting their venomous bites do the work while they wait in the heat for their prey to succumb. The Komodo dragon is the largest living lizard, yet it is classified as a vulnerable species by the International Union for Conservation of Nature (IUCN). This is symbolic of a broader national issue. With Indonesia’s rich biodiversity comes a wide range of environmental concerns. Across the nation, pollution, deforestation, and the far-reaching effects of climate change plague marine and terrestrial wildlife.

With some of the most coveted cruising grounds in the world, calm waters give way to pristine dive sites, such as the famed ‘Manta Alley’ 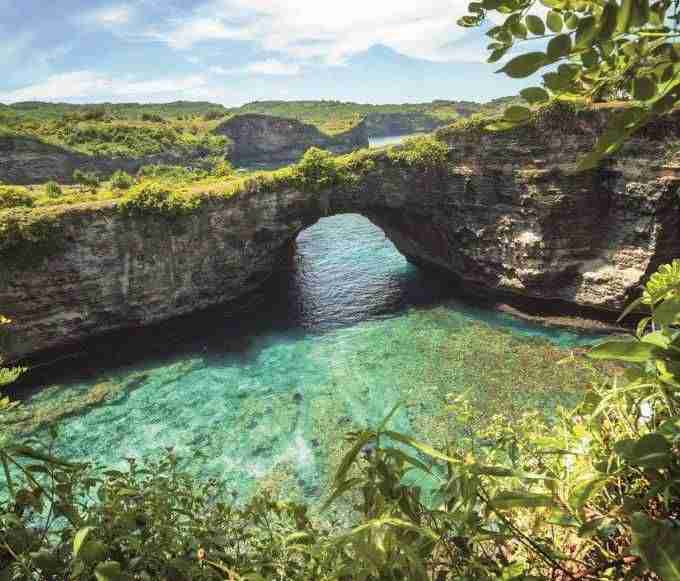 A beach on Nusa Penida

There is good news, however. “Indonesia has been very progressive in creating marine conservation parks and is proactive in protecting these areas,” notes Paul Whelan. He points to the multitude of local and foreign initiatives that have sprung up across the country, which educate village communities about the importance of sustainable fishing practices, reducing pollution, and protecting coral reefs. Resorts also maintain tracts of wildlife-rich land, and conservation efforts in national parks such as Komodo have reaped dividends.

In between the May to September and the October to April sailing seasons, yachts tend to make the journey from Komodo to Raja Ampat, which lies further north. In between, there are the Maluku Islands. “The rich seafaring traditions of this ancient spice route by traditional phinisi ships need no introduction, but for the private yacht charter guest, this place is as off the grid and exceptional as historical expedition charters get,” says Kel Willis, chief of brand and communications at Silolona Sojourns, a boutique luxury yacht charter company. 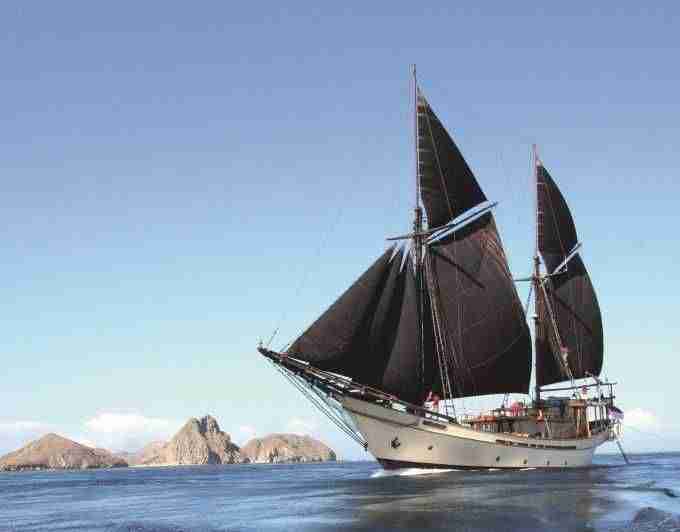 Once teeming with aromatic spices such as cloves and nutmeg, the islands were once known as “the Spice Islands”. Their precious bounty was discovered by the Portuguese, who were later caught in a three-way struggle between themselves, the English, and the Dutch for monopoly rights over the regional spice trade, with the Dutch finally prevailing.

The history of the Maluku Islands is graced by the aroma of spices and stained by the legacy of colonial conquest. Amid Dutch attempts to annex the central Moluccan Island of Banda, they faced resistance from the native Bandanese. In response, the Dutch massacred thousands of people, with thousands more starving to death or being enslaved. The remnants of colonial presence remain, with former European forts such as Benteng Duurstede and Fort Belgica scattered throughout the area. Alongside these relics, visitors to the Maluku Islands can also hike through jungles and up active volcanoes, such as 640-metre Banda Api. The Banda Seas are crystal clear, and divers can take in the sight of hammerhead sharks during the October to November period. 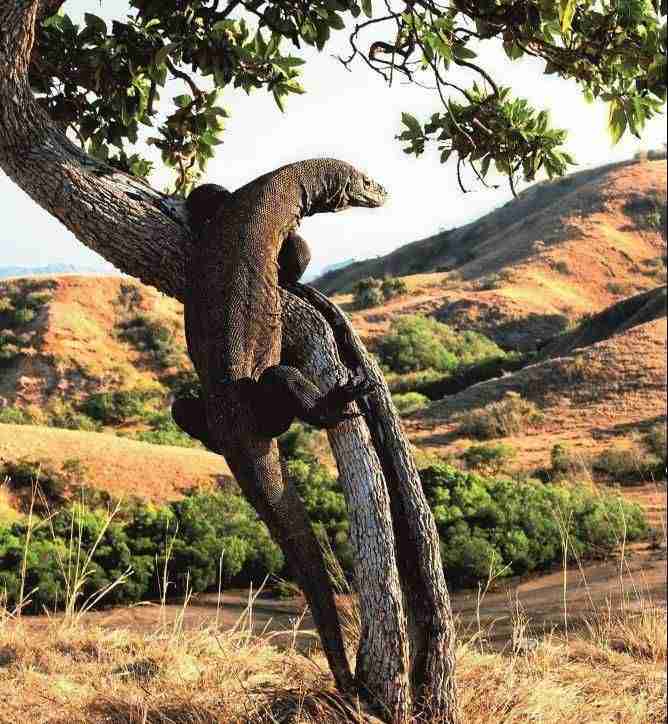 Translated as the “Four Kings”, Raja Ampat in West Papua is a boating hub during the October to April season. Peppered with tiny islands and dominated by high mountain ranges, the region has been dubbed The Pearl of Papua. Birding is a common activity on the islands. “Raja Ampat attracts a lot of people that want to do bird watching because you have so many birds that you cannot find anywhere else in the world,” says Dik Halman. Endemic species include the Wilson’s and red birds-of-paradise, renowned for their vibrant plumage. The Raja Ampat consists of 1,500 islands, islets and shoals, and it is very remote, despite its growing popularity. Kel Willis suggests that visitors stay in the area for a minimum of seven nights.

Raja Ampat in West Papua is a boating hub during the October to April season. Peppered with tiny islands and dominated by high mountain ranges, the region has been dubbed The Pearl of Papua 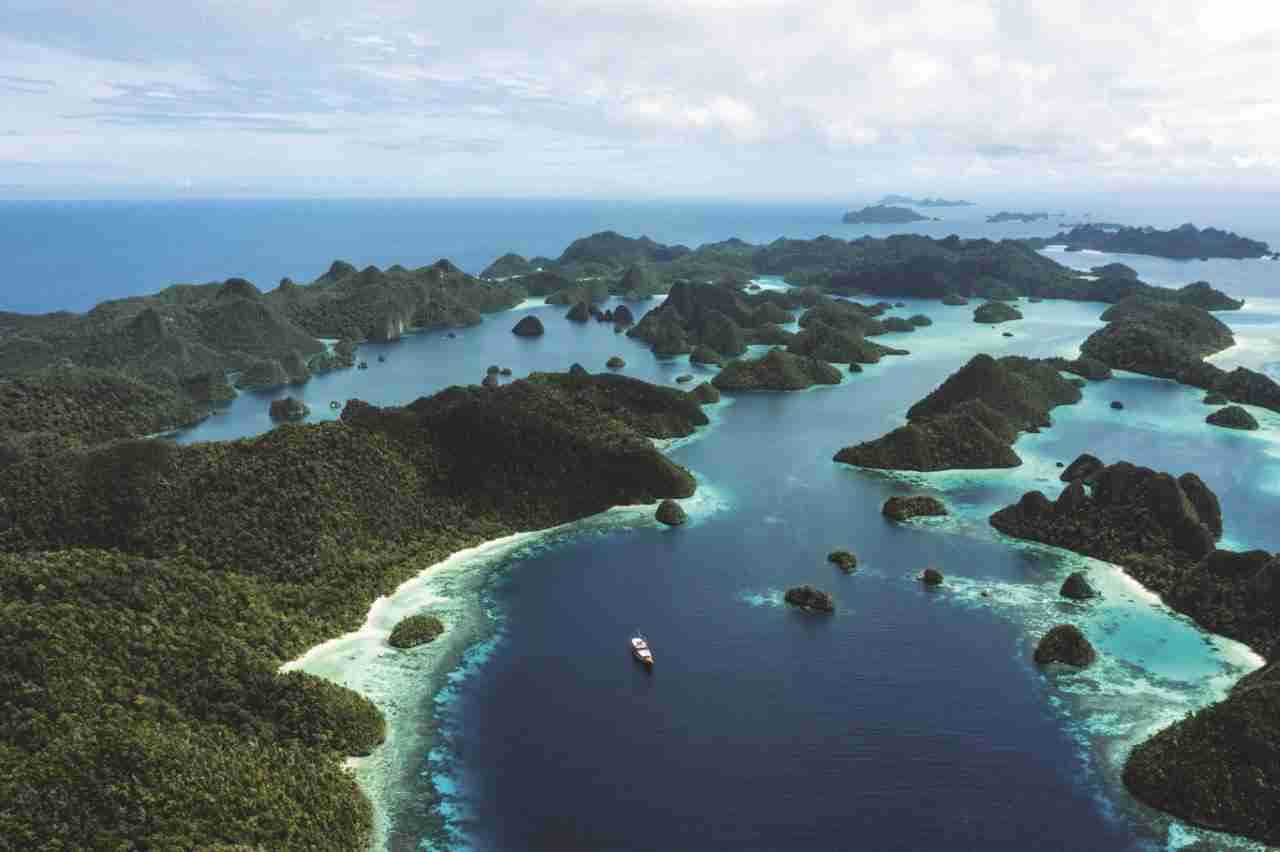 Raja Ampat consists of over 1,500 islands, islets, and shoals | Photo: Prana by Atzaró

Raja Ampat’s marine biodiversity has earned it the nickname ‘the species factory’. Aquatic wildlife has especially flourished during the pandemic due to a reduced human presence. Sea turtles abound, in part due to conservation efforts on the islands, and tasselled wobbegong sharks, known for their flat physique, are also commonplace. Originating from the eastern Indonesian province of Sulawesi, Silolona Sojourns, which operates the legendary phinisi Silolona, was the first sustained effort to transform the phinisi – a wooden sailboat which carries seven to eight sails on two masts – into a luxury yacht fit for charter. The yachts are an iconic aspect of Indonesia’s boating culture. 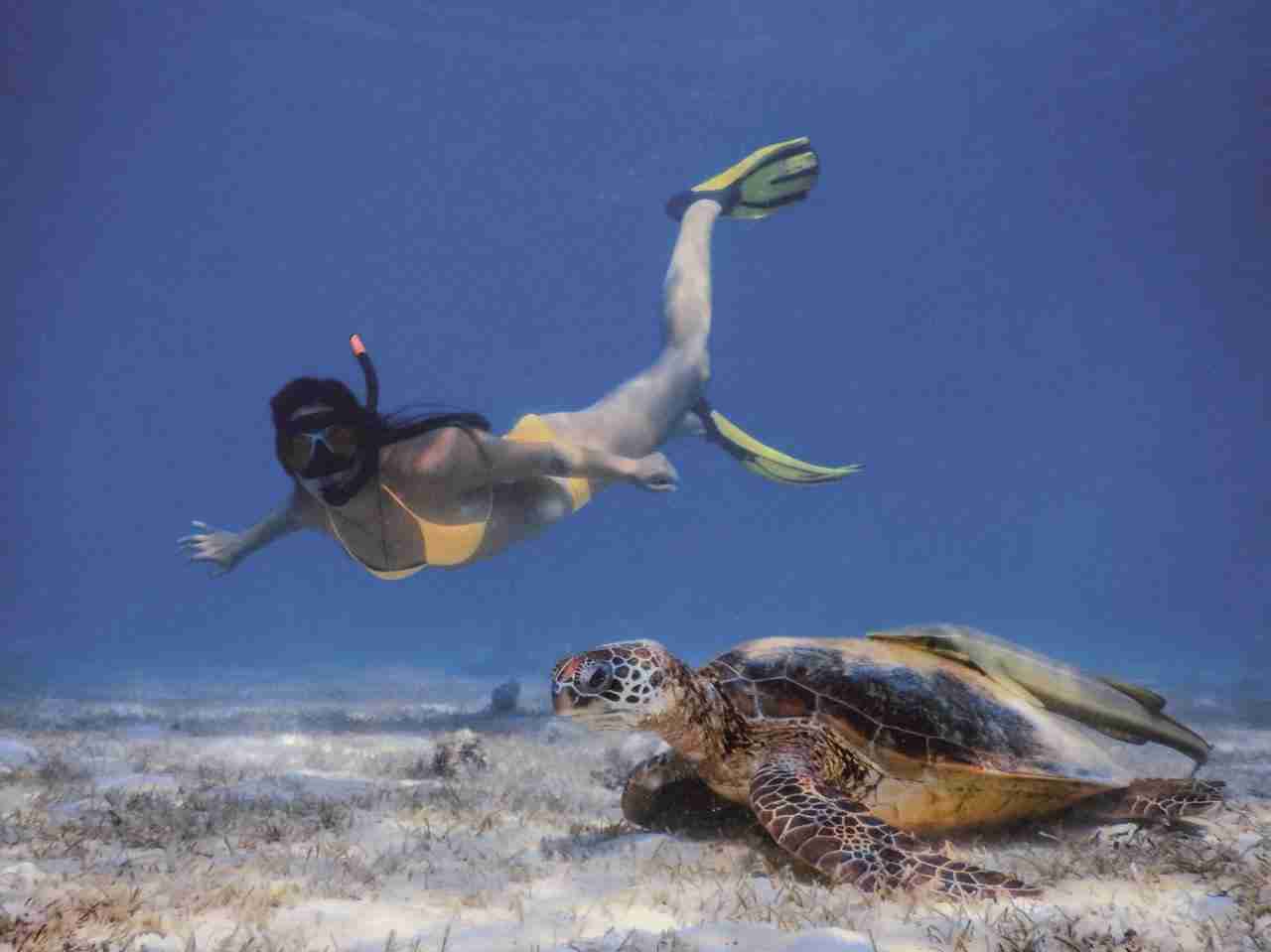 The Indonesian government is investing heavily in the local yacht industry. Labuan Bajo – a small town and the gateway to Komodo National Park – is being completely redeveloped, with the construction of a new marina. The Mandalika Project – an eco-sustainable development project in Lombok covering 1,175 hectares of coastal land – is also underway. With pandemic-induced travel restrictions hitting Indonesia’s yacht scene hard, the country looks set to rebound in years to come once restrictions are finally relaxed. It is a gem of a destination that’s getting ready to shine.

Best time to go: May to September

Best time to go: May to September

Best time to go: October to November, March to April

Official website of the Indonesian Ministry for Tourism: www.indonesia.travel