Few have been there, let alone heli-skied its dramatic slopes or surfed its undiscovered breaks. Yet Kamchatka and the Kuril Islands are fast becoming a part of the superyacht firmament 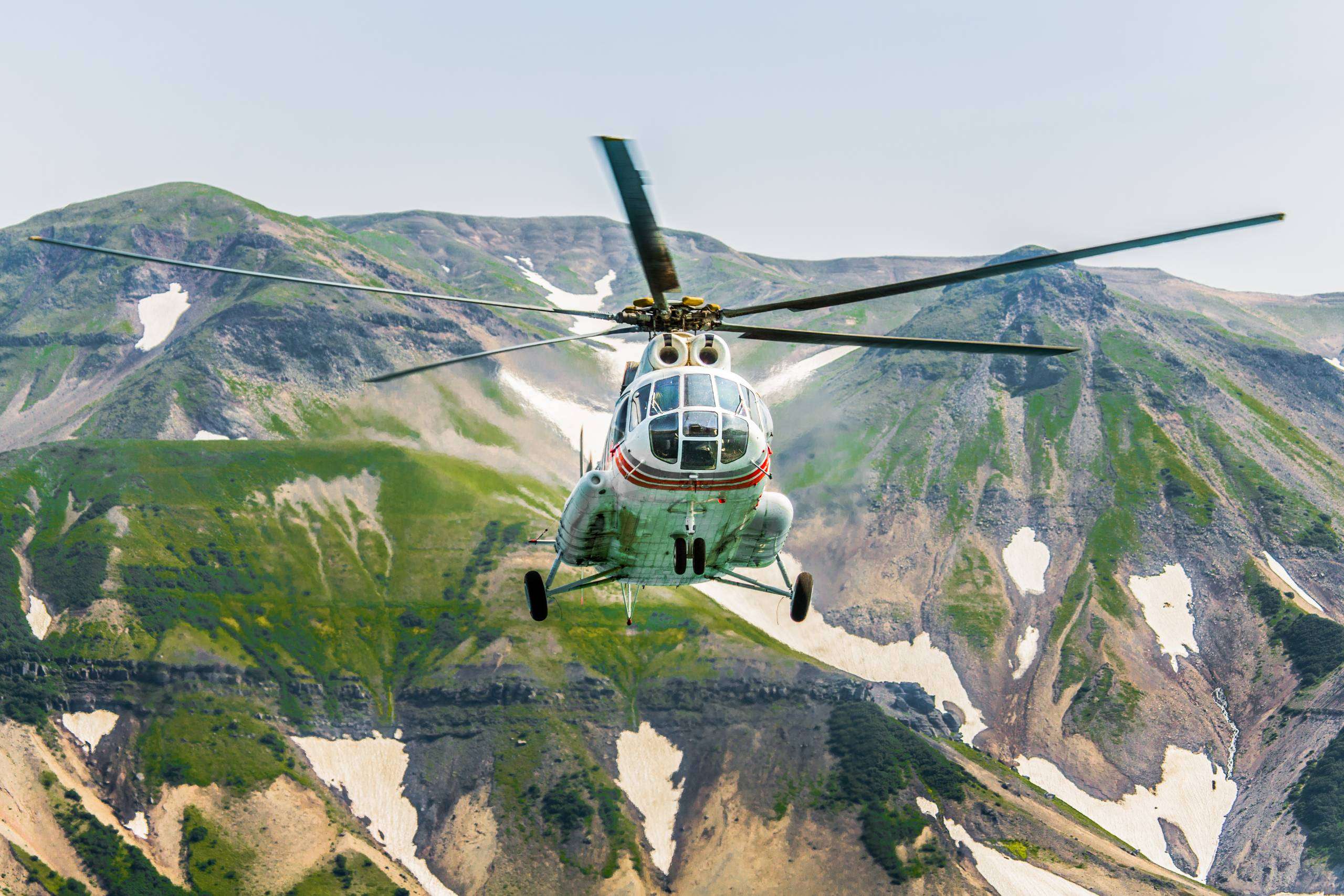 There are plenty of Cold War relics in Europe – extant pieces of the Berlin Wall, deserted border stations, in the case of Pripyat near Chernobyl an entire abandoned city – but there can be few Soviet-era relics more astonishing than Kamchatka and the Kuril Islands.

Their importance to the Soviet Union as a naval base for its Pacific Fleet meant that the entire region of 270,000 square kilometres was off-limits to Soviet citizens until 1989 and to foreigners until 1990. Even today, the capital of the region Petropavlovsk-Kamchatsky (population 180,000) is isolated from the rest of the Russian far east: the surfaced roads emanating from the city peter out into dirt and gravel tracks negotiable only by four-wheel drives.

This Cold War neglect, and the fact that it’s only accessible by sea and air, means this vast region, which includes the string of Kuril islands stretching down to Japan’s Hokkaido, form one of the world’s most pristine wildlife reserves.

The setting is spectacular. Part of the tectonic Pacific Ring of Fire, a horseshoe-shaped belt that stretches along 40,000km of the earth’s crust, Kamchatka and the Kuril Islands together have 300 volcanoes, 30 of them still active, earning its moniker as the “land of fire and ice”. 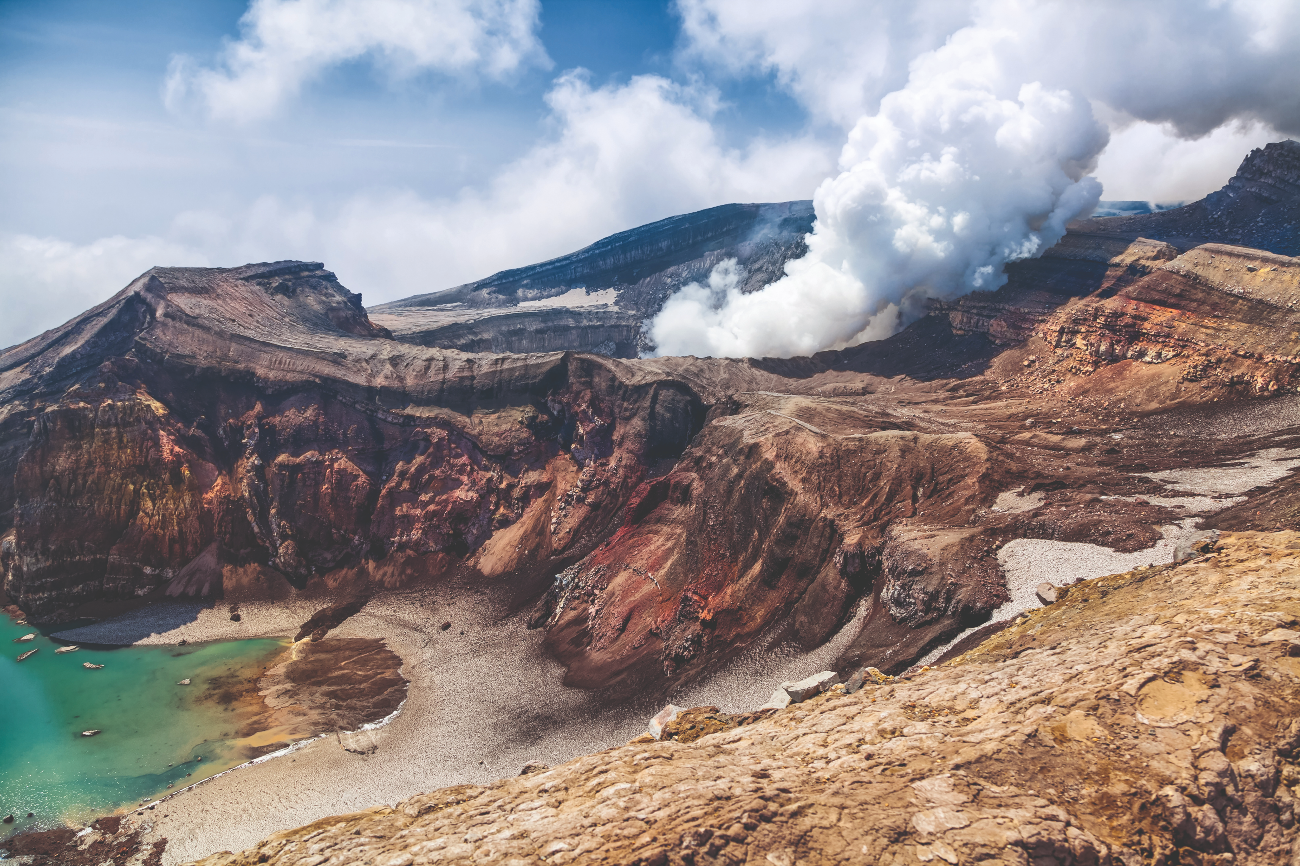 An erupting caldera on the Kuril Islands. The region is part of the Pacific “ring of fire”

“It’s very much a land of primal beauty and it resembles Earth in the earlier chapters of its creation; there are spurting geysers and erupting calderas,” says Nick Davies, director of projects at Cookson Adventures which specialises in luxury adventures.

“In September, mammoth brown bears patrol the waters for salmon in huge numbers and the volcanic landscape holds an enormous untapped potential for adventure.”

He says Cookson has itineraries that include bear tracking, diving to underwater smokers (where heated waters rise from cracks in the seabed), rock climbing, fly fishing, river rafting, and kite-surfing.

Despite the near-Arctic conditions, even surfing is now on the Kamchatka map.

In September, mammoth brown bears patrol the waters for salmon in huge numbers

Today, the beach is rarely without someone working the beach’s glassy surf, even if it means donning warm wetsuits, mittens and boots in waters that can get down to -3 Celsius.

“Few visitors leave feeling anything other than awe-struck,” Davies said, adding that one of the challenges is guaranteeing comfort in a region that still lacks infrastructure. “Getting here can take time, but we have the logistical expertise to mitigate this significantly.”

For most people, the itinerary begins with a flight to Petropavlovsk-Kamchatsky where yachts can provision and bunker fuel, before heading south and navigating the deep waters of the Kuril islands. 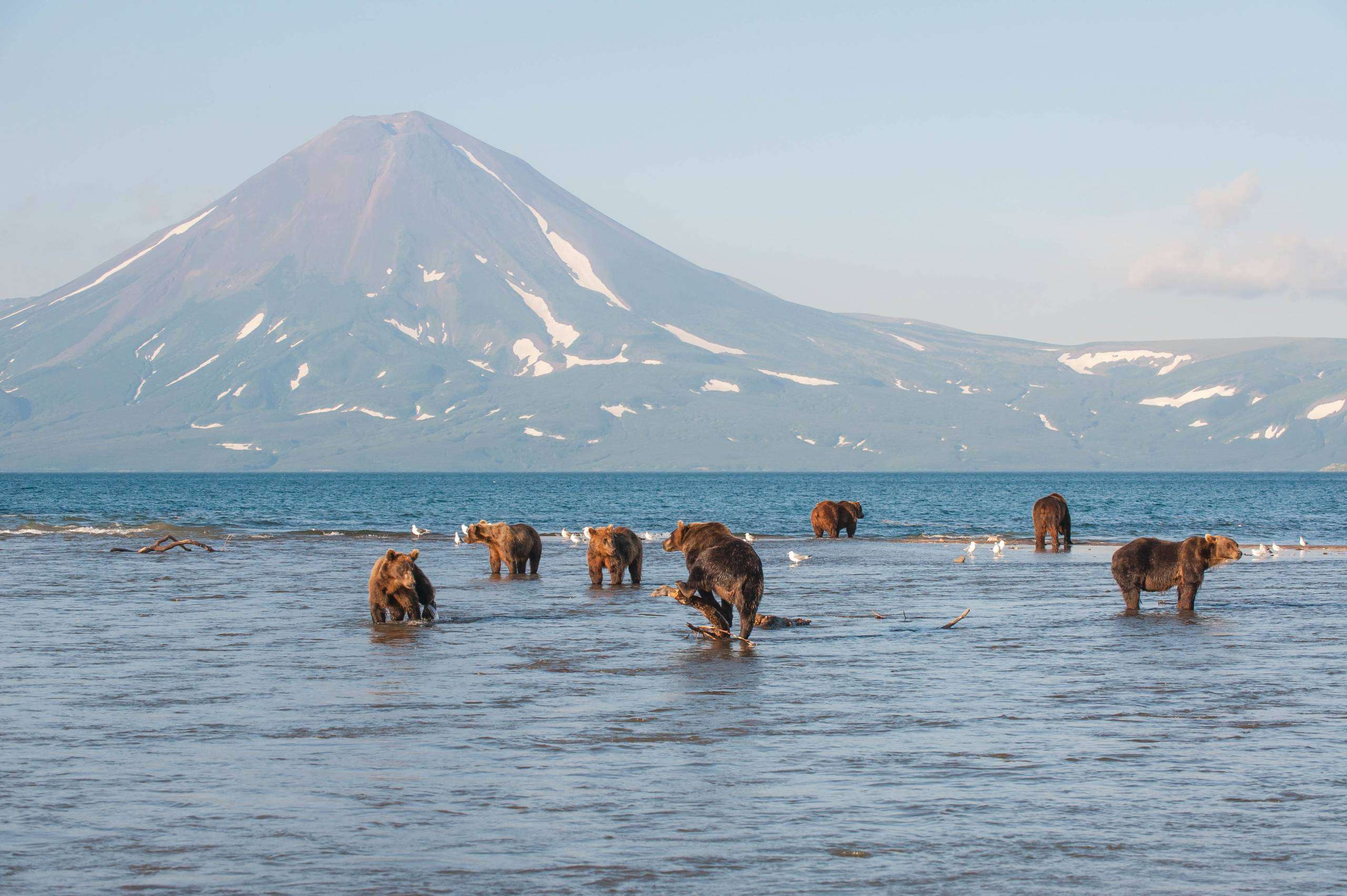 The climate on the islands is generally severe, with long, cold, stormy winters and short foggy summers, however there are windows of opportunity when exploration is ideal. Peak times to visit include August when the salmon run is in full flow. This ensures both bear viewing and fly-fishing opportunities are plentiful.

For yachts equipped with a helipad, travelling by helicopter to salmon fish the streams and rivers higher up the mountains is a must, followed by an exhilarating descent by mountain bike.

Hokkaido in northern Japan also provides refuelling facilities, but the vast area is ideally suited to long-range explorer yachts that can remain self-sufficient for prolonged stretches of time.

Davies said that paperwork and bureaucratic complications once made it difficult to explore the region, but a growing number of yacht owners were now looking for adventures in the region.

“We’ve done a huge amount of research with local suppliers and contacts on the ground so that we have what is required to make it happen,” he said.

The volcano-ringed Petropavlovsk-Kamchatsky’s biggest business these days is tourism. Nearby sights include the Vilyuchinsky Falls, a frozen waterfall, also known as the Tsar Icicle, that is formed from water melting off a glacier on the slopes of the Vilyuchinsky volcano. 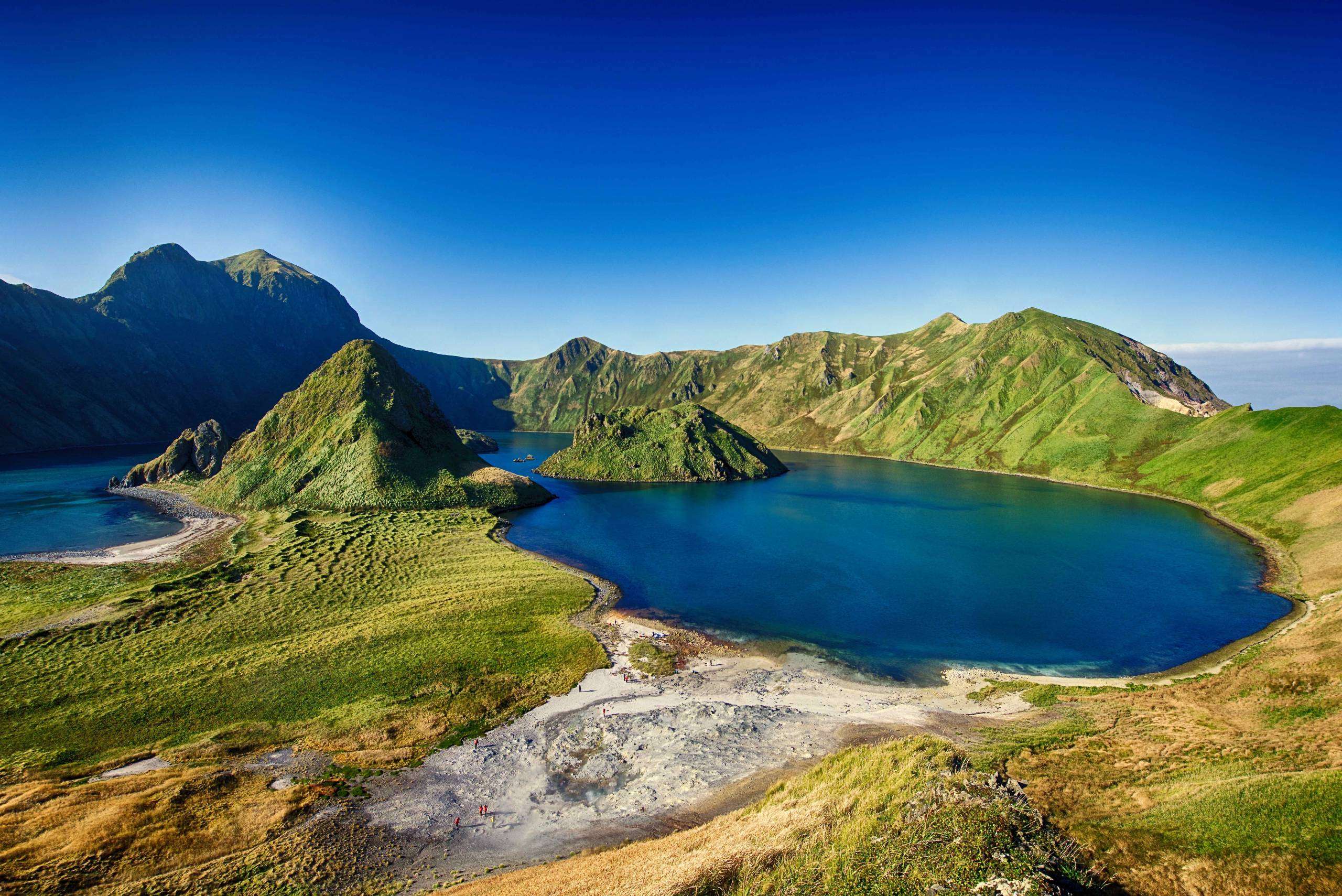 Just 80km to the south is also the famed Mutnovsky Volcano – a Mecca for volcanologists where murky expanses of steam are released from a seismic wonderland. The volcano last erupted as recently as the 1960s.

Steam billows from fumaroles, or vents created by heated groundwater and rising volcanic gas, serving as a visible reminder that the peninsula is one of the most volcanically active regions in the world.

Another awe-inspiring volcanic marvel, Kurile Lake, is situated at the southern tip of Kamchatka. The caldera, largely formed by a volcanic eruption 8000 years ago, is filled by a lake with an area of 76 sq km and a maximum depth of 316m which contains the largest sockeye salmon stocks in Asia.

Atlasov Island is the first port of call along the Kuril Islands heading south to Hokkaido where the volcanic island rises like a waterbound Mount Fuji. Its near perfect shape gave rise to many legends among the Kuril Ainu – the indigenous people that share a cultural link with the Ainu people of Japan’s Hokkaido.

One story runs that that it was once a mountain in Kamchatka, but the neighbouring mountains became jealous of its beauty and exiled it to the sea, leaving behind Kurile Lake in southern Kamchatka. 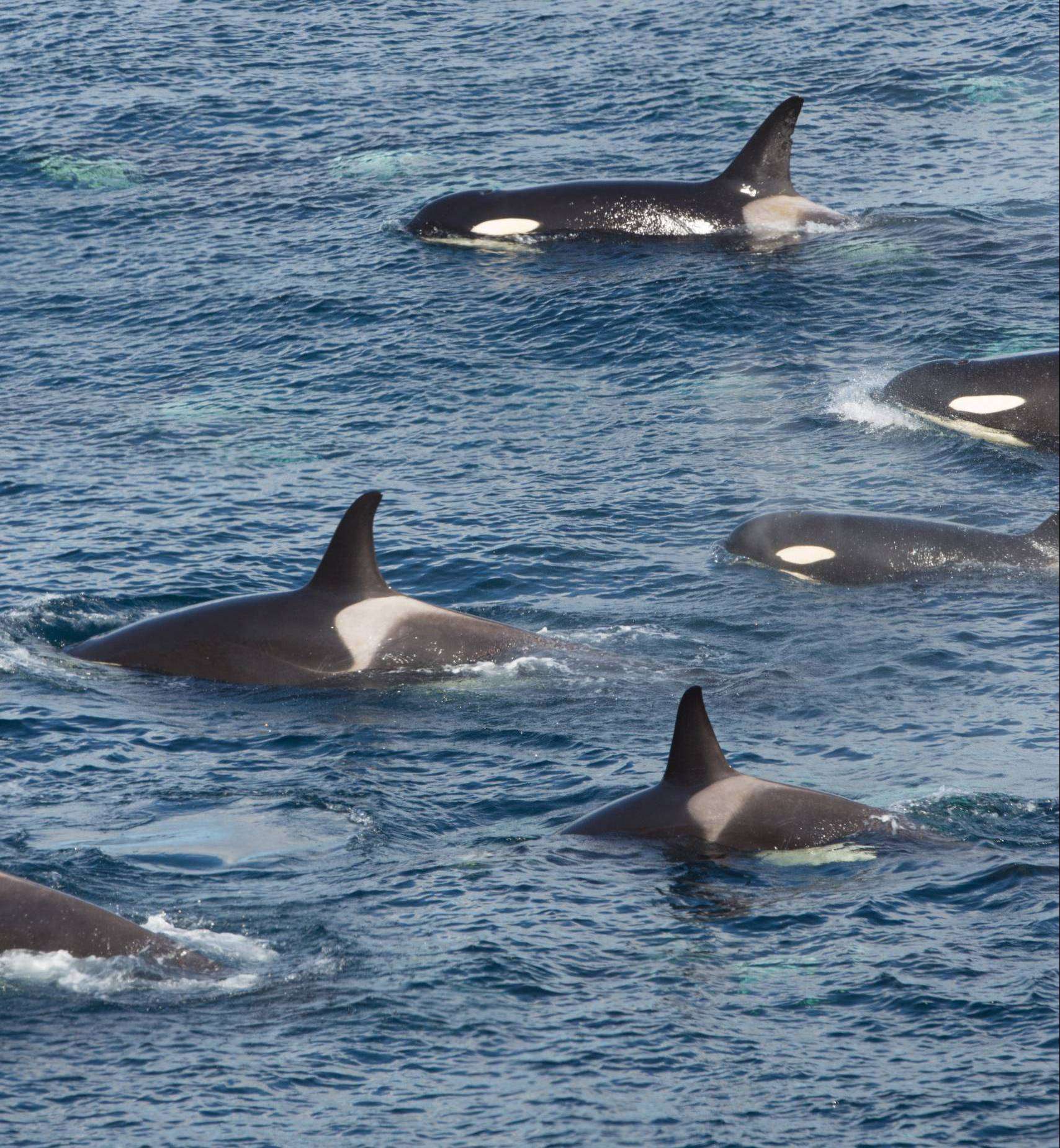 Geographically, the story is not without evidence. After the last Ice Age most of the icecaps melted, raising the world’s water level, and possibly submerging a landbridge to the volcano.

Next in the chain of islands is the breathtakingly hostile environment of the uninhabited Onekotan Island – a carpet of green and a gruelling 15km hike to the lip of the Tao Rusyr Caldera. Onekotan still has an active volcano with the most recent eruption, in 1952, forming a small lava dome on the island’s coast. A bay on the eastern shore contains the remains of an abandoned settlement.

One of the biggest draws to this region is the prolific wildlife. The waters teem with orcas

The natural hot springs of Yankicha Island are another tour favourite; sip Monopole champagne as you luxuriate in the hot waters while temperatures outside plunge to 8 degrees Celsius.

“One of the biggest draws, to this region, is the prolific wildlife,” says Davies. “The waters teem with orcas, porpoises and sea lions, while whales (Blue, Fin, Sperm, Humpback and Grey) and otters circle Yankicha Island, with its cinematic pools and dramatic mountain ranges.” 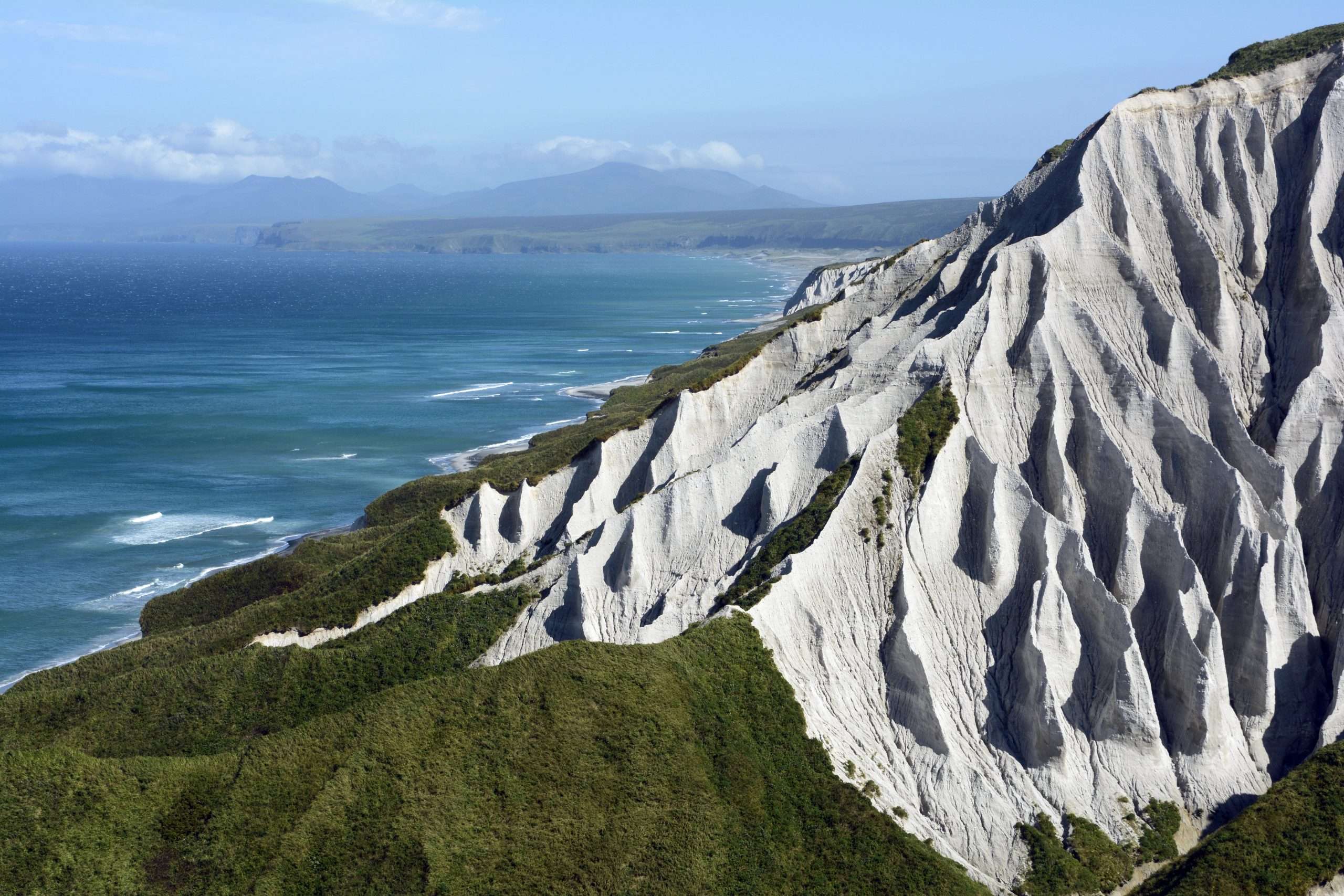 For the twitchers, the island chain is a paradise for ornithologists and is home to some of the world’s rarest bird species, many of which are endemic to the region.

Rosy finches and peregrines flit between the lakes on the Ptichi Islands, while crested auklets, tufted puffins and vast numbers of Steller’s sea eagles swirl in the sky. Often called the world’s most magnificent bird of prey, the Steller’s sea-eagle is dark, impressive, the largest of all sea-eagles, and the heaviest known eagle.

Urup Island, meanwhile, is just the spot for sockeye salmon fishing, and silver-tinted brown bears can be seen lumbering between the trees.

The Kuril Islands have had a turbulent past, administered by Japan and Russia at different times in history. While they’ve remained under Russian control ever since Soviet forces captured them following Japan’s defeat during World War II – today all 56 islands fall under Russian jurisdiction – Japan still lays claim to them today, making the dispute over this archipelago one of the longest-running unresolved international conflicts in the world.

Remnants of this political faultline can be seen on Simushir Island where a formerly secret Soviet submarine base was located.

The hulks of the pride of the Soviet fleet can still be seen along the Broutana Bay while the interior of abandoned Soviet military buildings still feature Lenin murals and abandoned military hardware. 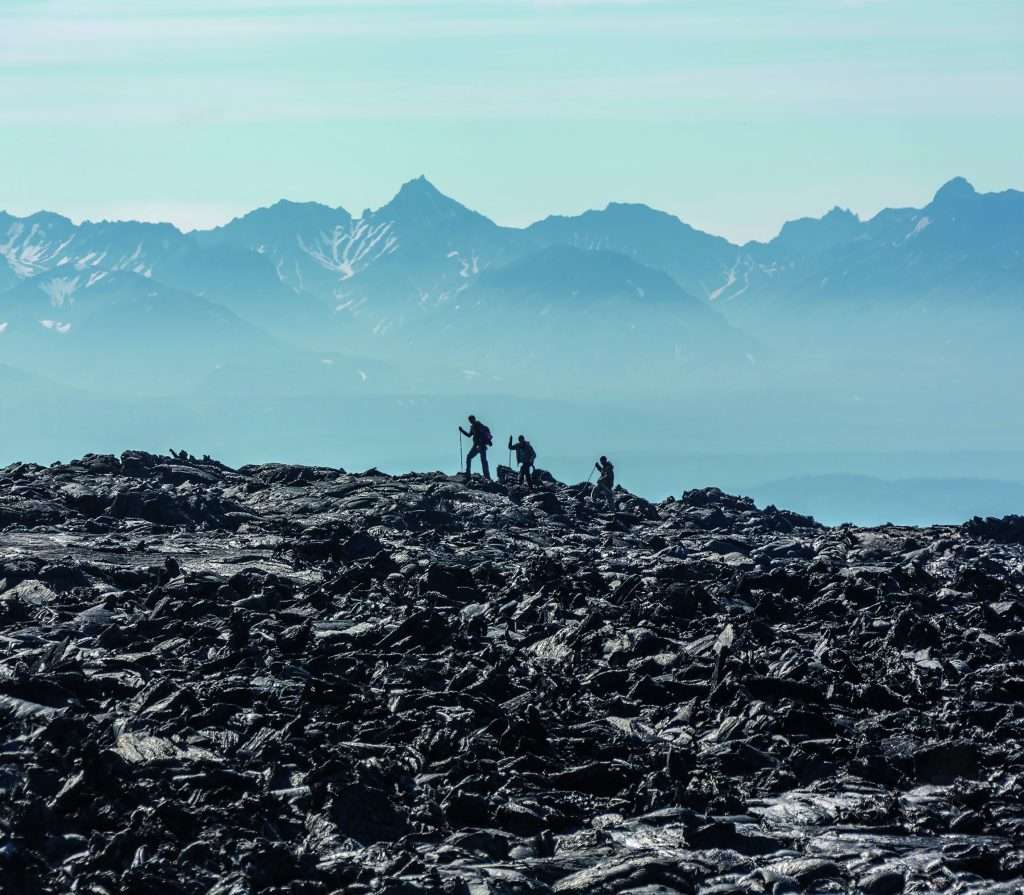 Ultimately, the real beauty of Kamchatka and the Kuril Islands is that their remoteness means they’ve been spared mass tourism. A private glimpse of this closed world is likely to remain the preserve of high- net-worth individuals for some time to come.

“Not many have heard of Kamchatka and the Kuril Islands, and even fewer have been. Intrepid heli-skiers and wildlife enthusiasts will be amazed by this volcanic chain in the Russian Far East, it’s a honeypot of untamed landscapes and rare endemic species,” says Davies. “Exploring the region by private yacht, with a helicopter onboard, is very rare — but we like to craft the ultimate expedition, delving deeper than others have before.”

Cookson Adventures is one of the world’s premier expedition yachting specialists employing everything from archaeologists and astronomers to anthropologists and marine biologists to custom-build unique adventures.

“Whether it’s being the first to take a submersible to Antarctica or spotting blue whales in the Pacific, together with our network of experts, we outsmart obstacles and turn boundaries into opportunities.”