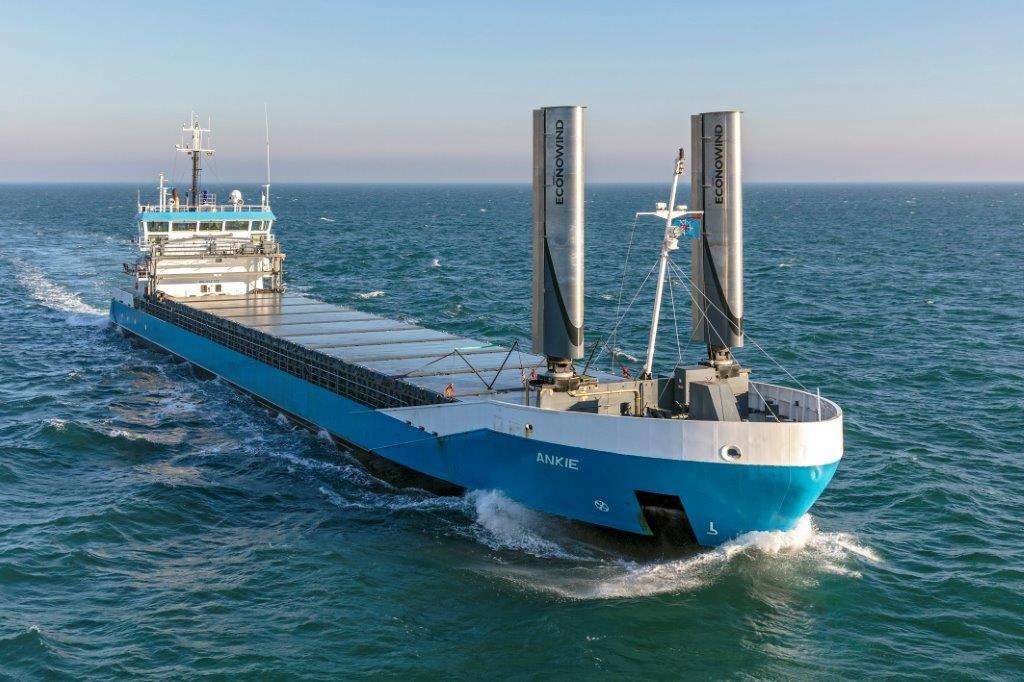 You may have caught some recent news pieces signalling that wind is again being harnessed in commercial shipping. Are we really harking back to a bygone era of tall ships, tea clippers and wind jammers that delivered their cargos emissions-free?

There is a lot to unpack, but broadly the answer is yes and no.

It took over a century to transition from sail to fossil fuels, and large sailing ships were still operating on long trade routes right up until WWII. Time, speed and efficiency underpinned the explosive growth of globalised trade over the past half a century, fuelled by cheap fossil energy. However, the trend towards decarbonisation is now causing serious industry players to join the push to emissions-free sailing.

Today, there are 15 large commercial ocean-going vessels in operation with wind-assist systems that help the main propulsion system. These include large tankers and large bulk carriers, through to roll-on/roll-off vessels (used to transport cars and trucks), ferries, cruise ships, general cargo ships and fishing vessels. 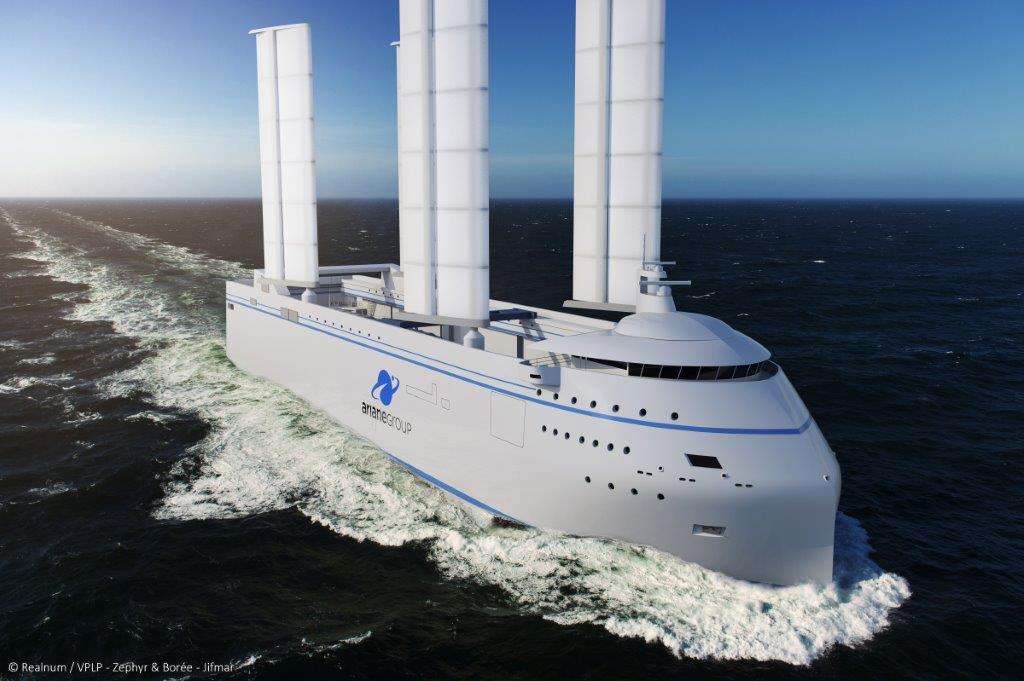 This number is supplemented by over twenty small sail cargo and small traditionally rigged cruise vessels. These large vessels use a mix of mechanical sails, such as Flettner rotors or rotor sails, which use rotating cylinders to generate thrust using something called the Magnus effect, a phenomenon discovered in the 1920s.

There are various rigid sails or foils that are more familiar to racing enthusiasts (with many of these now in late stage R&D) and suction wings, a stubby aerated wing sail with an internal suction device to draw in the boundary layer for additional thrust, developed by a team for Jacques Couteau’s Alcyone research vessel in the 1980s. Kite sails are also returning after a brief period of initial deployments a decade ago during a period of high oil prices.

Today, there are 15 large commercial ocean-going vessels in operation with wind-assist systems that help the main propulsion system

As retrofits, these systems can deliver up to 20% of propulsive energy (averaged over a year, without any changes to motor vessel operations) with the potential for 30% when fully optimised. With operational changes, those numbers are boosted further by adjusting for wind through lowering speeds, routing for wind etc.

New build vessels primarily driven by wind power could deliver better performance and there are numerous designs and actual projects underway. There are plans to build roll on/roll off ships and car transports operating on windy North Atlantic routes that are forecast to be 80% driven by the wind energy. The first delivery is expected in 2024. There are also plans for smaller, expedition-style cruise ships that can maintain 17 knots under wind alone. Smaller inter-island freighters working the Pacific Island routes are slated for first operations next year.

All wind systems face operational constraints, such as low bridges or port operations that can make large rigs difficult. We therefore see tiltable, retracting and rail systems already being deployed along with containerised system developments that hold promise. 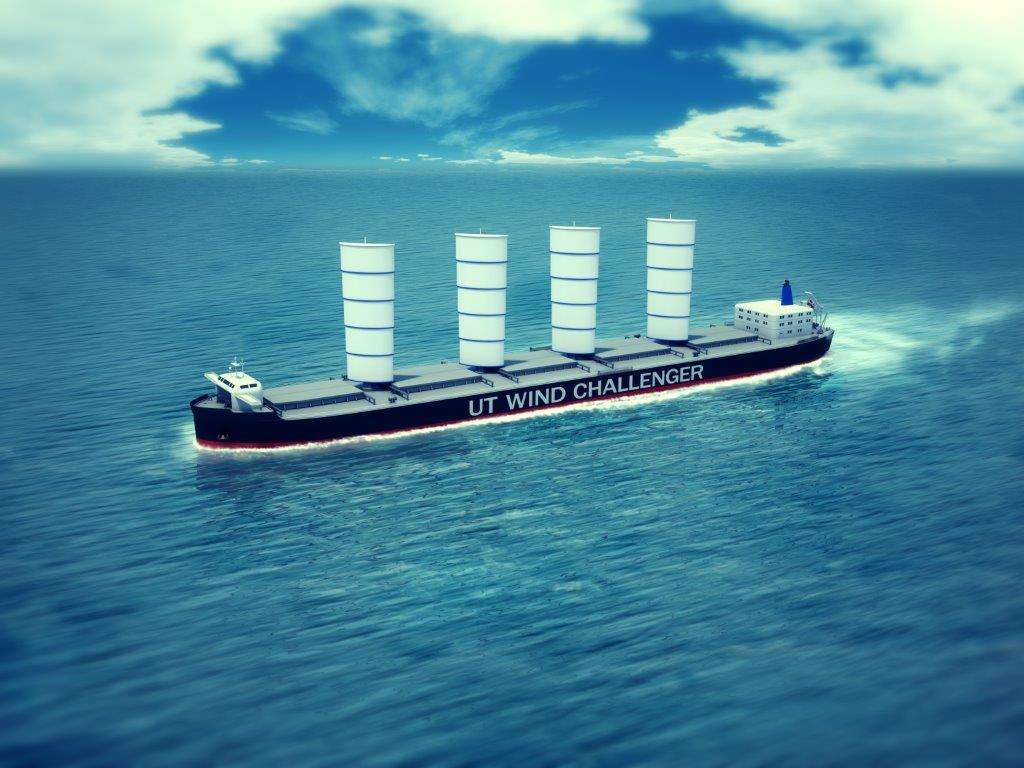 Wind Challenger design by the University of Toyko

So, are all these wind experiments just part of a fad?

Current momentum in the sector and two recent third-party forecasts suggest not. The existing pipeline of wind-related projects will deliver a doubling of installations on ships each year out to 2023/24. An EU report projects up to 10,700 installations by 2030 (approximately 15% of the world’s fleet) and the UK Clean Maritime Plan has estimated 40 to 45% of the world fleet will have wind propulsion of some kind by the 2050s. The fuel savings alone from an ambitious rollout of wind propulsion systems this decade would cover a significant proportion, if not all, of the US$1 to $2 trillion needed to fully decarbonise the industry by 2050.

It is possible to have a fleet of modern, 100% wind-powered vessels. There are designs for ships that use excess wind power to generate electricity using hydrogeneration technology, which could then be used during a period of no wind. That extra energy could also be used to create green hydrogen for use as a fuel and even offload it in port as an additional revenue stream.

Though wind solutions for shipping are still relatively uncommon, mainstream industry players are involved in the quest for a wind-powered solution. Among them are MOL, Oldendorff, Maersk Tankers, Vale, Cargill, Hyundai, Michelin, CMES, Renault and the Ariane Group among many others. A truly wind-powered commercial fleet is no longer just something for the distant future.

Gavin Allwright is secretary-general of the International Windship Association