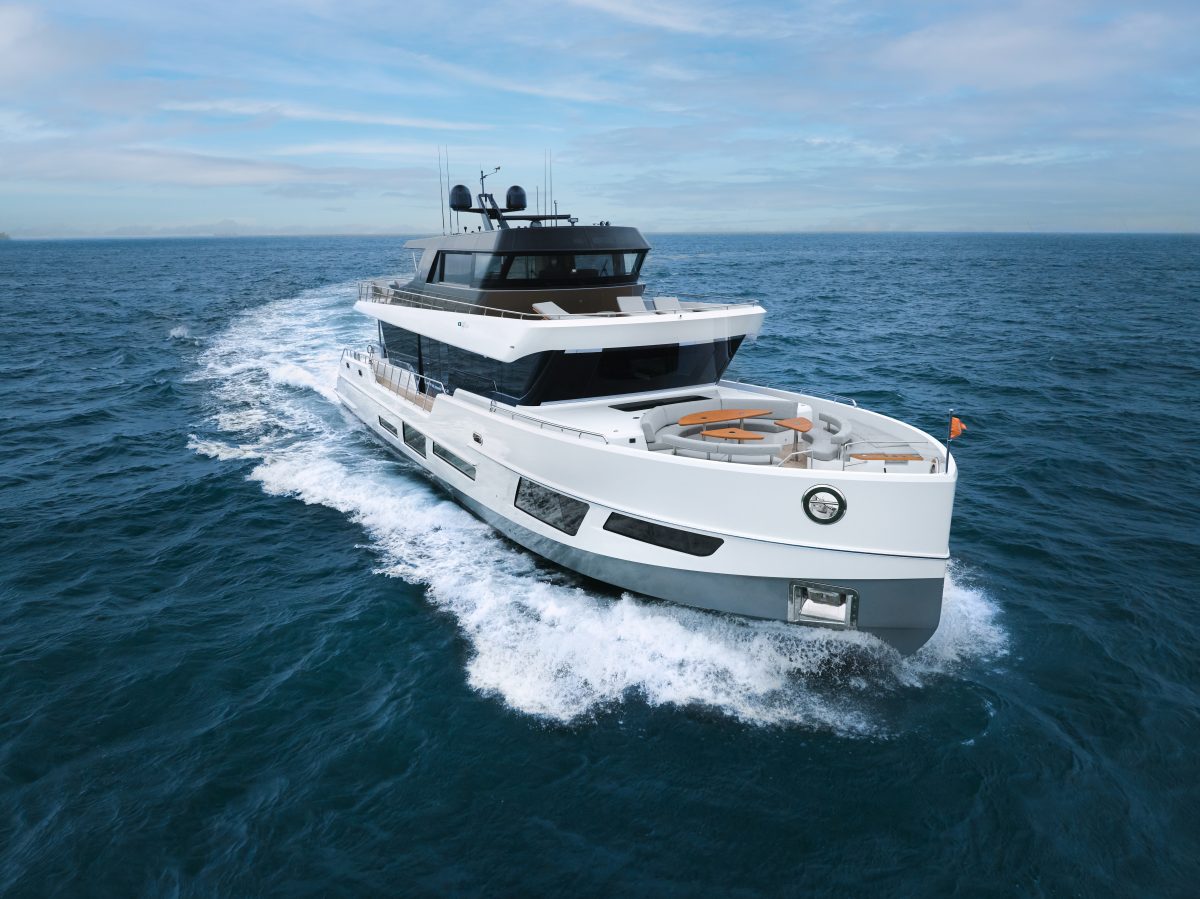 The first CLX96 SAV (Sea Activity Vessel) has made its debut at the 62nd Fort Lauderdale International Boat Show (FLIBS), which took place in Florida from October 26-30, 2022.

The 29.5-metre superyacht has been specifically designed by CL Yachts for the American market, with distinctive exterior and interior lines by Milan-based designer Jozeph Forakis.

Forakis has penned an aggressive and angular profile that is said to recall hardy workboats, giving rise to the yacht’s ‘SAV’ moniker – the boatbuilder says the 29.5 metre CLX96 is the world’s first Sea Activity Vessel. 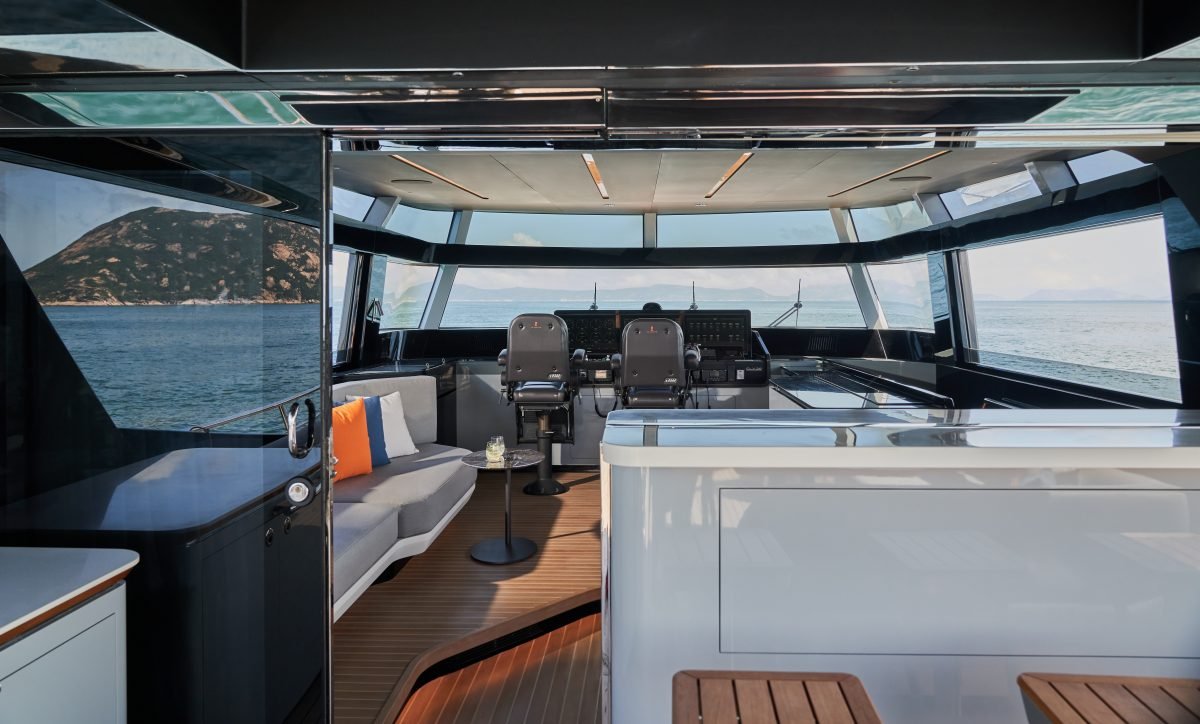 “The SAV acronym represents something uniquely different to each individual owner, reflecting the way they enjoy their time aboard,” says Earl Alfaro, the naval architect responsible for CLX96. “Some will find solitude at a leisurely pace while venturing towards their far-off destination, while others take pride in the exhilaration that accompanies a vessel in this category having the prowess to achieve higher speeds.”

The forward-raked windscreens on the main and upper decks are designed to reduce both glare and heat while also increasing interior living space. Thanks to expansive glazing, the interior offers near-uninterrupted 360-degree views.

“In early 2017, CL Yachts reached outside the industry and asked me to rethink yacht design and yachting experiences,” says Forakis. “They gave me a clean slate to conceive a new vision for the yacht of today and tomorrow. With in-depth research methodologies and a focus on intelligent design, complementing my passion for sailing and ‘outsiders’’ imagination and dreams, the result is a vessel that departs from convention.” 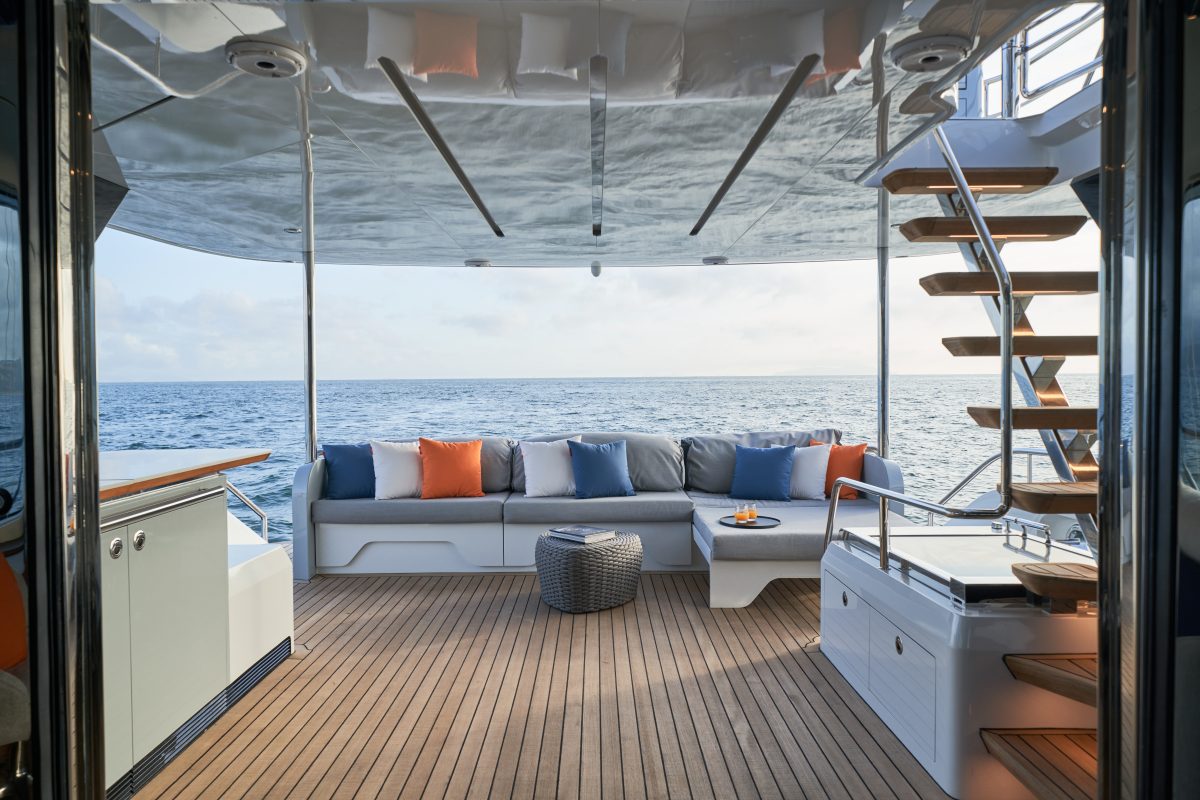 While CLX96’s bold double-reverse-angle profile and wing-like flybridge bulwark are visually distinctive, Forakis explains, these elements were born from a reconsideration of the way to live on a yacht and informed by precise structural principles.

On the main deck, there are trifold doors to starboard that open the midships area to the side deck and bulwark cutaway, creating a near-alfresco dining area in the heart of the main deck’s open plan living space. This area blends with the aft saloon and forward country-style galley with island and Champagne lounge.

In front of the Pilot House, Forakis has created the ‘Terrazza Portoghese’, a generous additional deck space perfect for sun loungers, while on the foredeck there is an inviting ‘Piazza del Sole’ – a circular aperitif lounge that converts into a giant sunbed. 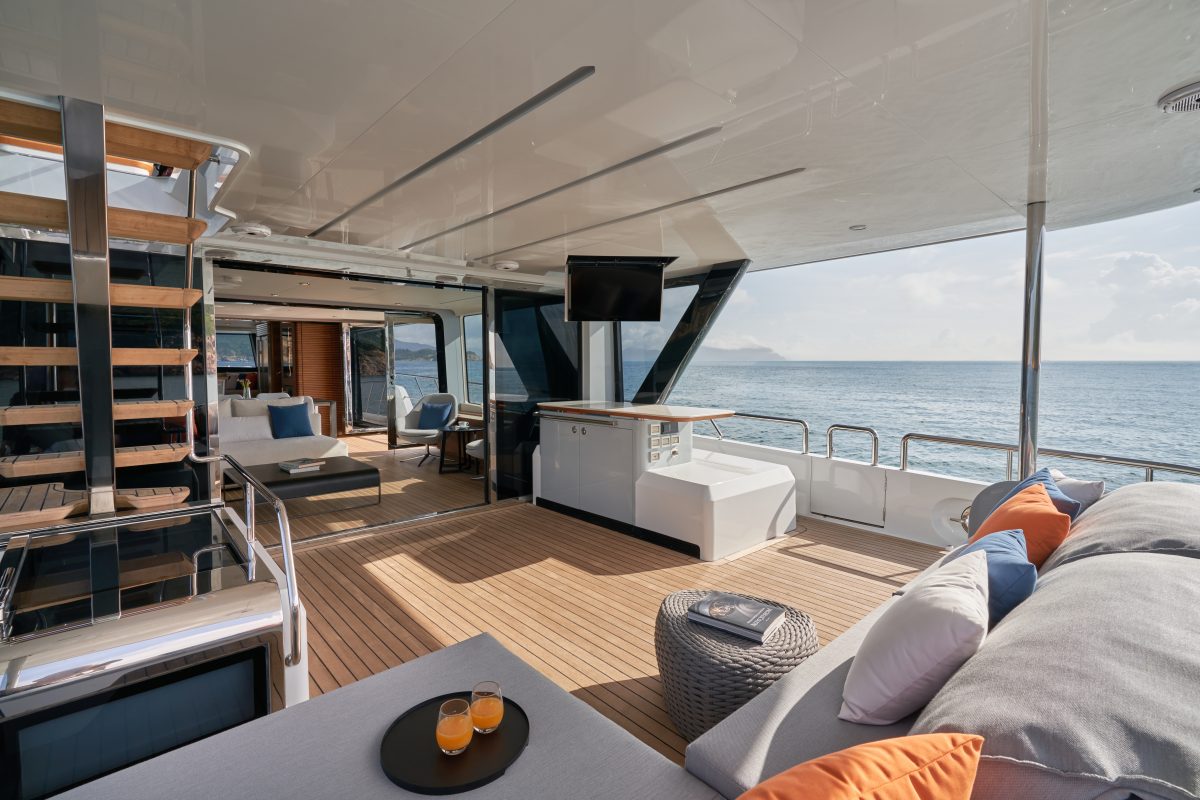 CLX96’s standard configuration below offers four guest cabins, including a master suite forward complete with skylight over the king-size bed, a full-beam midships VIP cabin with virtual skylight, and two twin/double convertible guest cabins with ensuites. There are crew quarters aft for up to four crew.

“The materials, finishes, and colours are restricted, giving a sense of continuity to the spaces for this new series – and emphasising pure daylight as an essential ‘material’,” Forakis says. “Through seamless surfaces, subtle curves, and flowing planes, we wanted to remind people at all times that they are on a ‘vessel’ meant to transport them through space and time toward the future.”

The materials and palette include walnut for the walls, teak and holly soles for the main and upper deck interiors, black marquina and satin snowflake marble for the bars and countertops, and a range of textures and materials in off-whites, warm greys and browns punctuated with occasional orange highlights. 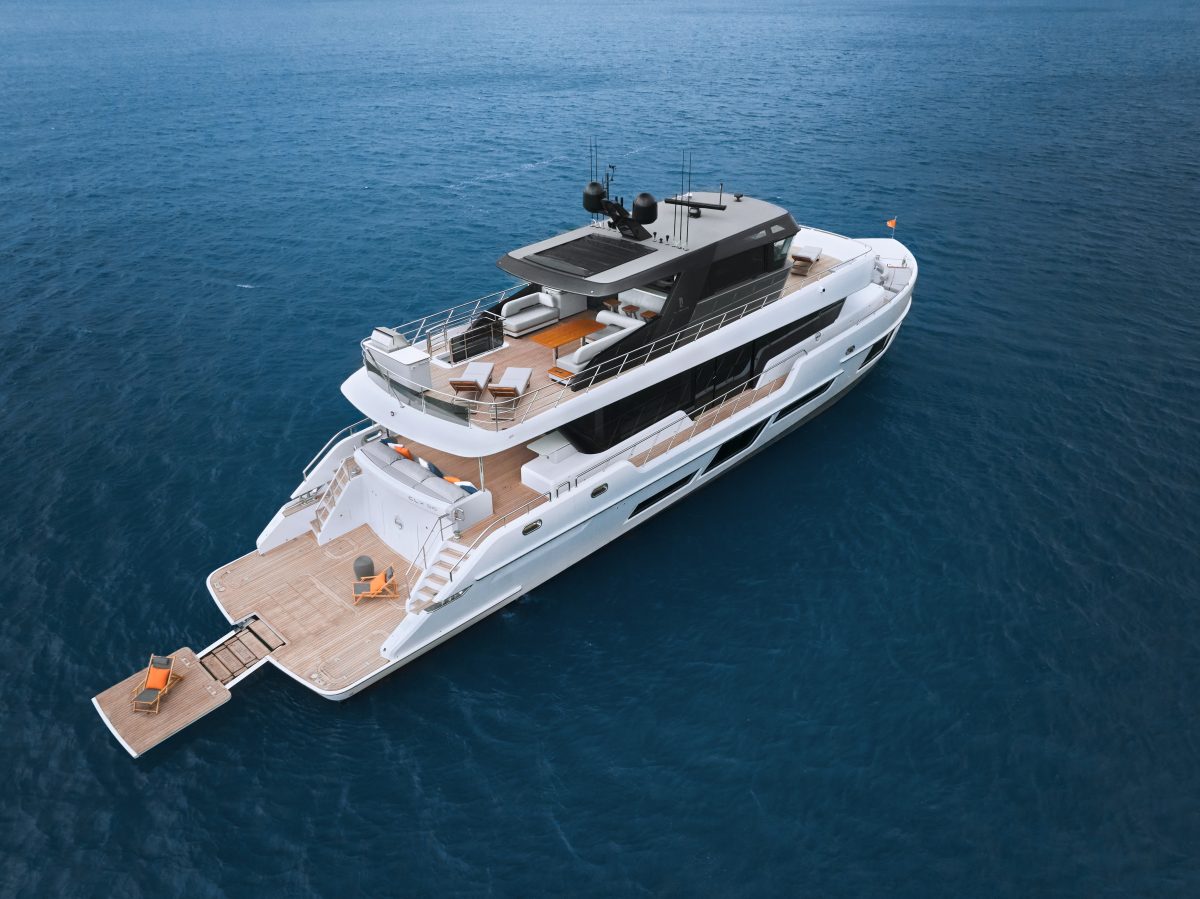 “The SAV concept demands big viewing areas which require an abundance of glass, and the amount of real estate remaining for structure is relatively slim,” says Albert Horsmon, who oversaw the structural engineering of CLX96. “In keeping with SAV requirements for speed and range, the composite structure needs to be light – and compact, light, strong and stiff leads the whole design and build team to carbon fibre.”

An example of the extensive structural engineering are the mullions that support the glass, with the corner mullions for the windscreen proving a particular challenge. “The mullions are carbon unidirectional and double bias infused composite ‘hoop’ beams that run continuously and unobstructed from the main deck on one side, up and across the salon and then down to the deck on the other side firmly bolted to reinforced locations in the main deck,” Horsmon says. “The arrangement allows good headroom, tight corners for doors, and robust stiffness to support the upper deck and pilot house.” 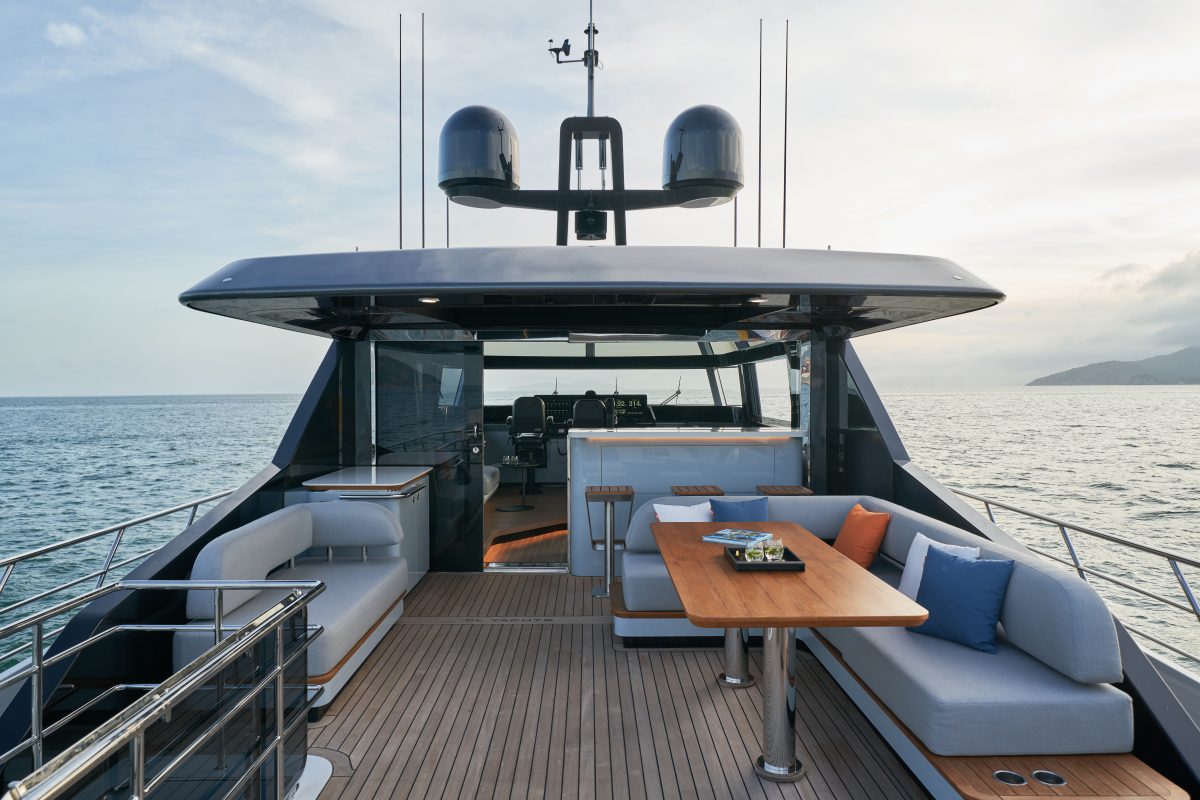 The hull itself is built to RINA classification, with naval architecture focusing on cruising speed at 65-80 percent engine load with capacity for occasional sprints at wide-open-throttle. To achieve the required hydrodynamic efficiency, Alfaro introduced a mild warp into the planing surface. The result is a hull that transitions seamlessly from semi-displacement to planing modes with minimal changes in dynamic trim.

“From the very beginning, both form and function were evaluated concurrently to combine the bold geometry of CLX96 with the proper hull form,” Alfaro explains. “The result is a thoroughly modern vessel from the waterline up, complemented by exceptional performance achieved through an in-depth analysis of her hydrodynamic properties and an innovative approach to applying proven principles in planing hull naval architecture.”

Powered by twin Caterpillar C32 engines rated at 1,900hp each, CLX96 can achieve a top speed with a full load of 25 knots with a solid 22-knot cruise. The 1.62-metre draft also means the yacht can sneak into shallow bays, perfect for cruising in Southeast Asia.