An electric-hydrogen-fuel cell powered 40-foot dayboat/superyacht tender will make its debut at this year’s Cannes International Yachting Festival. Hynova CEO and founder Chloé Zaied, a former boat skipper, confirmed that the prototype Hynova 40, is now in construction and would be ready for display at the Cannes show, starting September 8.

With plastic waste in the oceans continuing to be a major concern, British luxury motor yacht builder Sunseeker’s addition of onboard water filter systems for all its new boats is very much welcome, decreasing the need for single-use water bottles on yachts. 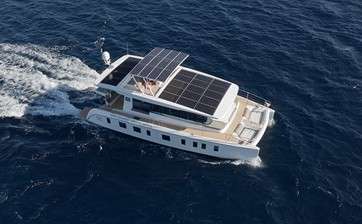 Shown at Boot Düsseldorf, this model will be “world’s most efficient and quiet” chase boat, built for range and speed with zero emission