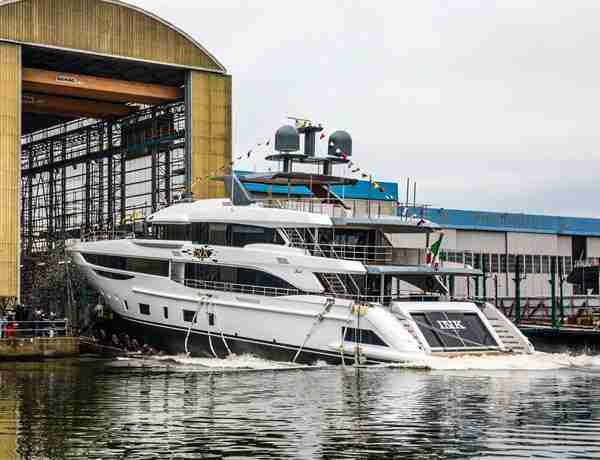 On the morning of Saturday January 25, the first Diamond 145 unit was launched using Benetti’s Viareggio slipway. The 44m Class category fibreglass flagship was given its baptism in the sea during an impressive and emotional ceremony.

“Slipway launches are part of the history of Benetti shipyards,” says Azimut|Benetti Group President Paolo Vitelli. “We have a great tradition and hundreds of yacht launches to our name, but the revolutionary features of the Class category today promise to bring Benetti new success. This slipway is in fact a launch pad for our technical expertise and desire to push ahead, in a technological challenge focused on the goal of continuity.” 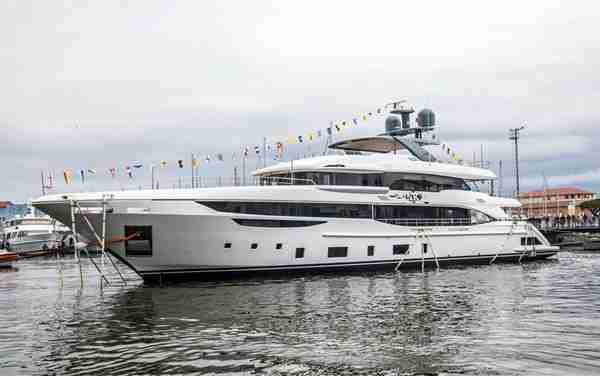 When paying his compliments to all the designers, Vitelli made a point of thanking Giorgio M. Cassetta, who worked on the yacht’s exteriors: “Giorgio has given a soul to a yacht that integrates innovation and tradition.”

Cassetta commented on his work by saying: “Diamond 145 springs from a project with a mission to improve life on board not only for owners and guests, but for all the crew too. The sheer size of the yacht has made it possible to adopt an impressively ergonomic approach that ensures a majestic stance, while embracing ultra-modern details combined with a style that reflects the concept of a timeless yacht.”

Diamond 145, sold by brokers Domeyachts and The Doc Yacht Services, is a powerful-yet-elegant yacht with a fibreglass hull, 456 gross tonnes, and a range of 3,600 nautical miles at a cruising speed of 11 knots. The design of the exteriors, taken together with the contribution from Benetti’s Interior Style Department, underscores the details and celebrates harmonious, balanced proportions.

The yacht, of which two units have been sold, is the only fibreglass yacht of this size available today on the market. The design of the big seamless glazed surfaces on the main decks flows along the entire length of the yacht, allowing natural light to flood into interiors accommodating 10 guests in four cabins on the Lower Deck, while the captain has a private cabin on the Upper Deck, near the helm station. In the stern, sliding glass doors open out onto a spacious beach area.

On February 6 in Viareggio, Benetti launched BD106, the sixth hull built of the Delfino 95 model with all-Italian styling. A contemporary, refined and elegant yacht, the extensive glazed surfaces create dramatic plays of light. 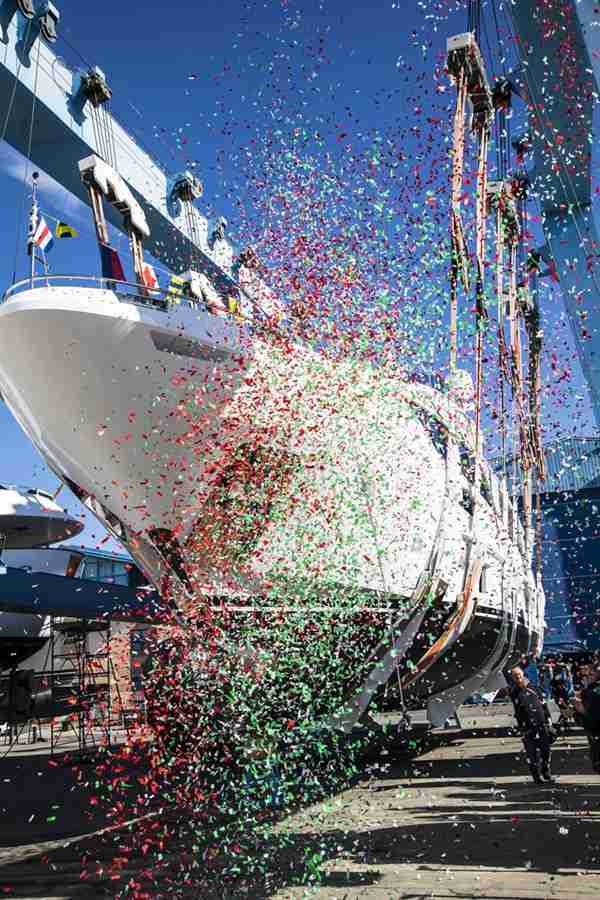 BD106 has a Cypriot owner, is 29m long with a beam of 7m, and is built from composite materials. The exteriors are designed also by Giorgio M. Cassetta, while the interiors are the work of the Benetti Interior Style Department. The layout of the four decks features five cabins for the owner and guests, three for the crew including the Captain’s cabin, a large helm station on the Upper Deck, and a second one on the Sun Deck.

On the Main Deck, wood and marble are featured in the main salon, which is divided into a dining room with a table for 10 and a living area with a sofa and armchair. Further forward are the galley and the day head amidships, while the Owner’s cabin in the bow is furnished with a double bed, a vanity table for her, and a spacious double bathroom with a big marble shower in the centre. The Lower Deck has four double cabins for guests, while the bow area is reserved for crew accommodation and can sleep up to five in three cabins. 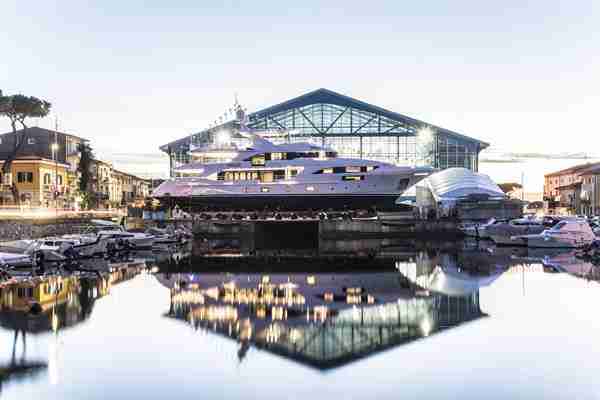 The next day, Feb 7, also in Viareggio, Benetti launched Happy Me, the 14th Classic Supreme 132 unit, a 40.2m displacement yacht owned by a German industrialist.

“I’m very grateful for and impressed with the passion and devotion shown by Benetti throughout the construction of this yacht,” the owner said at the launch ceremony for the yacht, which has spacious exteriors, particularly on the about 100sqm Sun Deck and the Upper Deck, where a lounge area is joined by a Jacuzzi with a spectacular sea view forward of the Pilot House. 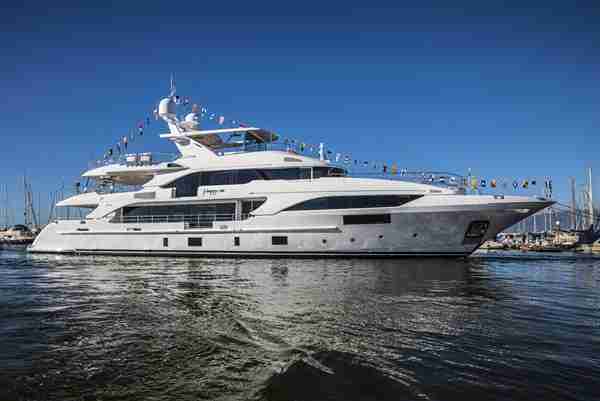 The exteriors are designed by architect Stefano Righini and the interiors are the work of François Zuretti. On the Main Deck, the Owner’s cabin in the bow is entered through a spacious lounge area lit by natural light that filters through big windows in both side walls. Guest accommodation is provided by two VIP and two guest double cabins on the Lower Deck. On the same deck in the bow, in a section separated from the guest area, is the crew accommodation, with seven bunks in four cabins, a kitchen and dinette, while the Captain’s cabin is on the Upper Deck. 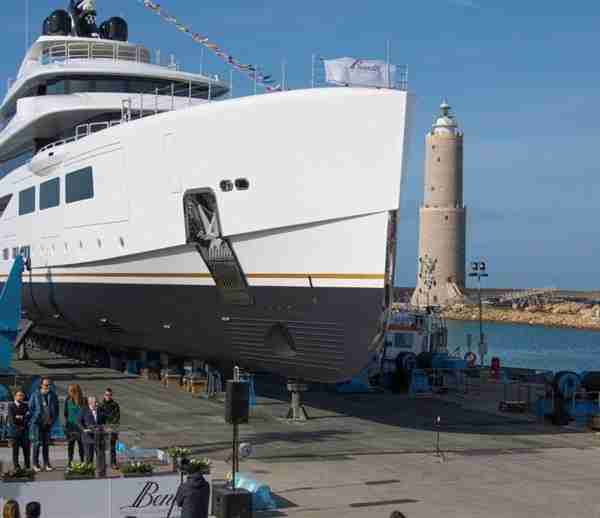 On Feb 17, the Benetti shipyard in Livorno launched FB273, the elegant 70m custom yacht with a steel hull and aluminium superstructure. The exterior design was developed entirely by Benetti, working in close collaboration with the Owner, while the interiors are by Laura Pomponi and her team. Construction was supervised on behalf of the Owner by Bureau Veritas Solutions M&O. 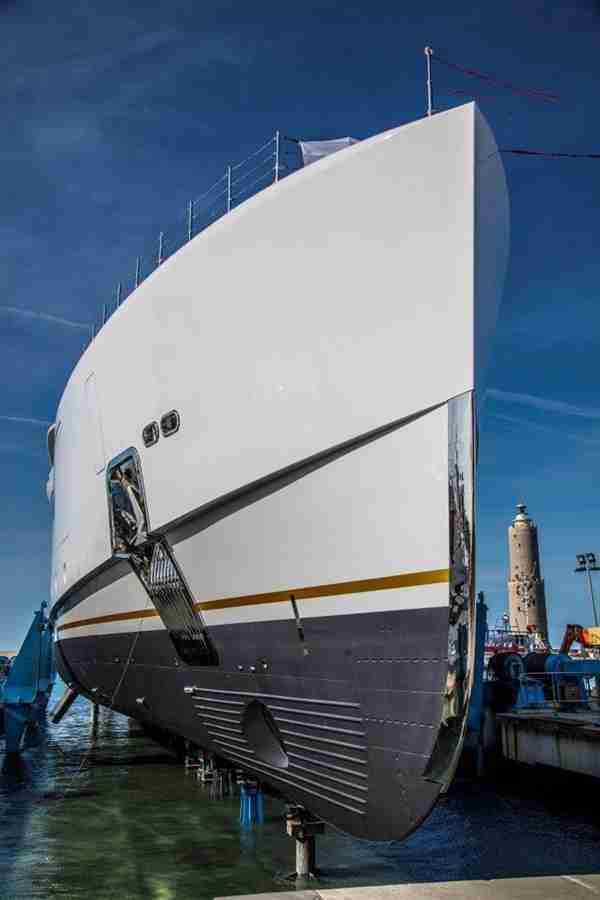 The yacht extends across six decks and has a futuristic stern area featuring two side doors and a variable geometry swimming pool, a vertical bow with a touch-and-go helipad and Jacuzzi on the Sky Deck.

Perhaps the most striking of the many unusual features of this superyacht is the stern area, which has a variable geometry swimming pool with a special system that varies the depth for use by both adults and kids — installed on a Benetti yacht for the first time. The bottom of the pool becomes an integral part of the Main Deck when fully raised and the Beach Club opens out with two side terraces over the water.