The family who founded the Jebsen Group have amassed nautical art and artefacts for centuries. Much of the collection has deep connections with trading routes from Europe to Asia, explains Hans Michael Jebsen, the group’s chairman 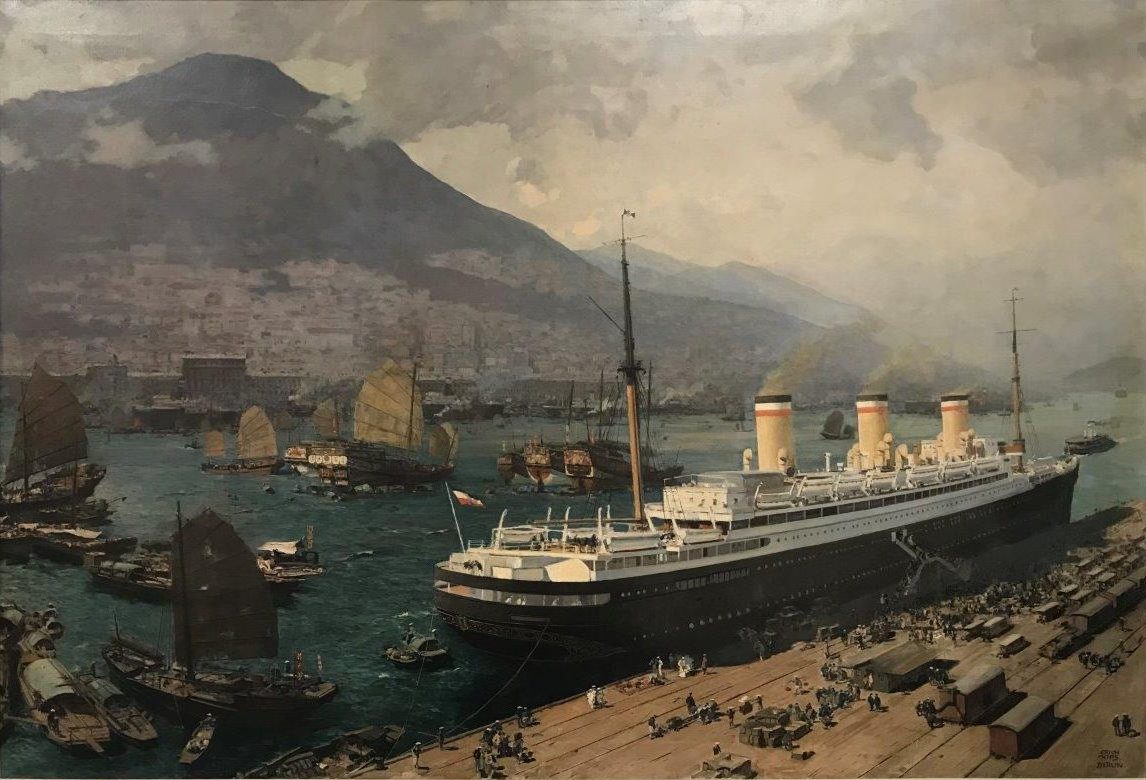 Hans Michael Jebsen is the third-generation chairman of Jebsen Group, one of Hong Kong’s most storied companies. The native Dane has a love of boating and maritime history – something passed on from his family, whose fascination for the nautical world dates to 1725, when an ancestor seven generations before him became a trading-ship captain and collector of art that depicted the family’s world. That art collection is now stored in both Hong Kong and Denmark, with parts of it lent out to museums.

Founded in 1895, Jebsen Group has gone on to become a conglomerate working in finance, logistics and industrial services in Hong Kong and mainland China. The group’s diverse portfolio includes esteemed brands like Porsche and Champagne Bollinger.

Hans Michael spent his childhood surrounded by books and paintings of ships and maritime history at home and in Jebsen’s company offices. He also spent many hours sailing with his father. 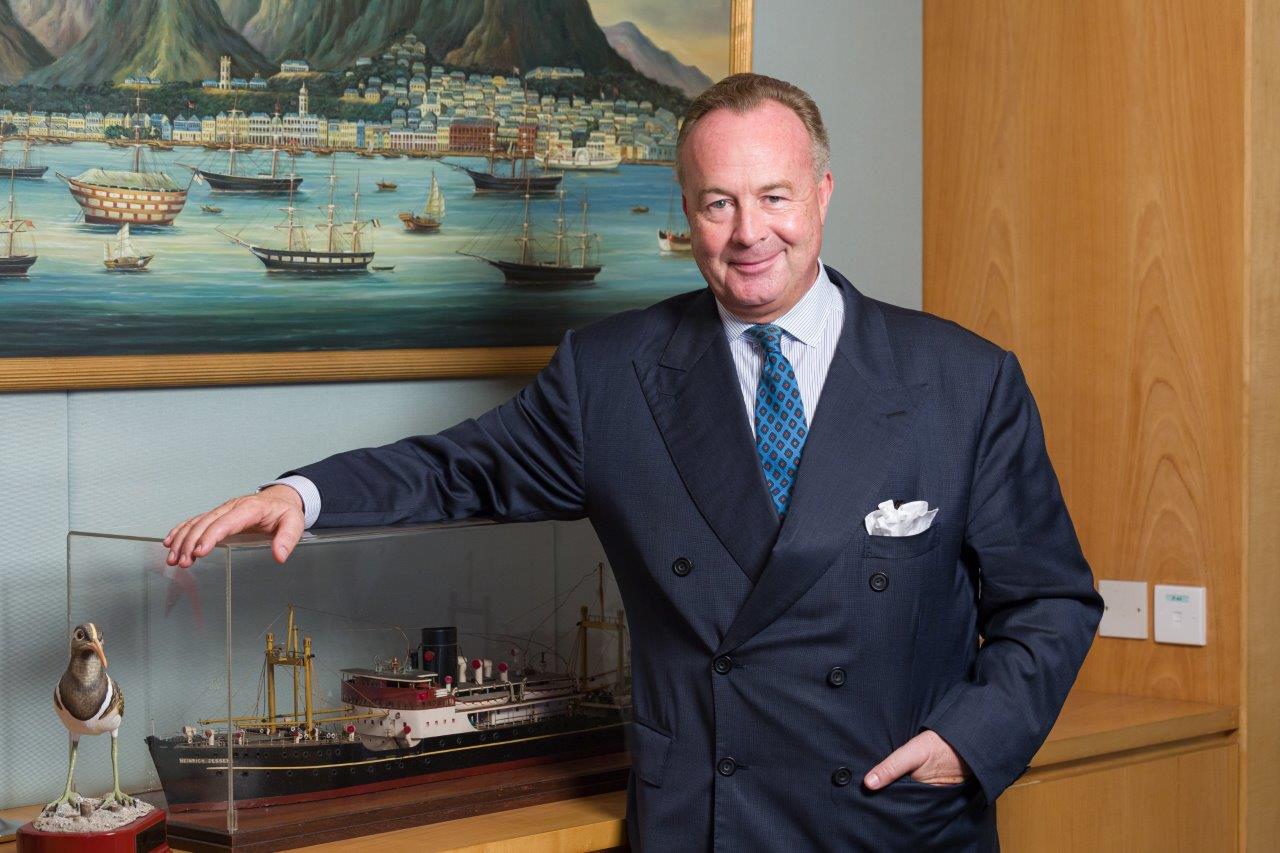 “In the 1950s and ’60s, my father had a Norwegian boat with a keel that could be pulled up, and then we had a small boat – a local type called folke boats, which were pretty easy to handle, and we were encouraged to sail by ourselves to get confidence,” he recalls. “As a young man, I then chartered pleasure craft, to go to Norway on trips with friends.

“Then a friend of my father had a 12m yacht from 1918, commissioned during the First World War. We still have it, and it’s one of the surviving 12m yachts of that time – there are only about 12 of these remaining. We named it Thea, after my grandfather’s yacht of the same name. It’s in shipshape and is usually sailed five months of the year by a professional crew sailing boat. We use it sporadically, and racing crews use it to participate in just about every race in the Baltic Sea.

“We raced it in the America’s Cup in Cowes [in the UK] some years ago and were one of many vintage yachts.”

Jebsen’s childhood memories of curiosity and appreciation in yachting and shipping are steeped in broader experiences with his father than just leisure sailing. “He was an ardent shipping person – for him it was a calling more than business. I remember going to shipyards and seeing him being very sociable, talking to welders and others on those sites.

“At home, he often talked about his design ideas for interiors, about what colours he would use, and giving them a sense of homeliness – with paintings on their walls, for the crews to enjoy. And when ships or yachts were dismantled, we would often end up with bits and pieces, like a compass and ashtrays at our home.

“When I was quite small, a Chinese crew of at least 20 were staying in our home, on our guest floor on one occasion. And I still remember the very different scent of their cooking for a couple of weeks and playing with them a bit. Growing up, I went to launches of new ships, which were great occasions – large crowds would always gather to see them. Our family would treat members of the crew like our own family – often two or three generations of the same families would work on our ships.”

Jebsen – who arrived in Hong Kong in 1981 – loves all manner of art and relics connected with nautical history. He recently purchased an old seaman’s suitcase at auction. “It had his crew number, and – in Chinese – the name of the ship and a description of the voyage on it,” Jebsen says. “It was worth nothing but told a story.” 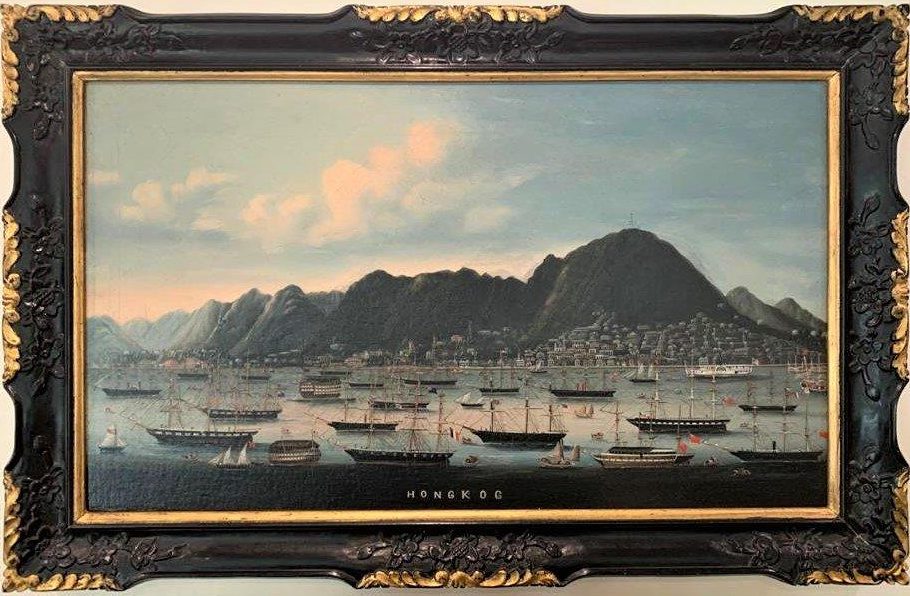 An oil painting of Victoria Harbour from the late 1800s.

The family collection includes museum-worthy maritime art and artefacts – with a focus on those in Asia – ranging from ship models to 18th- and 19th-century oil paintings depicting scenes around the South China Sea. The collection is closely connected to the Jebsen family’s history with commercial sailing.

Jacob Jebsen and Heinrich Jessen, pioneers from two Danish seafaring families – arrived in Hong Kong to found Jebsen & Co. “Shipping from Denmark had already developed around the Baltic Sea, to the Mediterranean, and then on to the longer distances of South and North America, and then to Asia – in that order,” says Jebsen.

My father collected paintings of ships, mostly ones from our company, or if there was a family interest in it. He was keen on ‘marine paintings’ – a ship in a storm, with torn sails, or other eye-catching scenes

“There were towns in Denmark with schools for navigation and to train captains, and there was a practice for boys of about 14 or 15 to start their experience by going off to sea as deckhands to the Cape of Good Hope and so on. If they went on to make this their career as a captain, a pre-requisite would be to buy a stake in a ship, to show commitment.”

Some of Jebsen’s favourite paintings contain backdrops of Hong Kong, such as this oil painting of Victoria Harbour

In the 20th century, the two World Wars decimated the Jebsen fleet except for one passenger and cargo boat – the SS Heinrich Jessen –  built in the 1940s in Hong Kong. “It was seized by the British after the German occupation of Denmark in 1940,” explains Jebsen. After World War Two ended, the SS Heinrich Jessen was used to repatriate foreign nationals stranded in Shanghai or Hong Kong.

When ships or yachts were dismantled, we would often end up with bits and pieces, like a compass or ashtrays, at our home

“People often brought back memorabilia,” says Jebsen. “Bottled ships were popular. Whatever people think of them in modern times, they took a great deal of skill to make, and those who have spent years on a ship would often like to make one or commission one. Our family museum has the largest collection of bottled ships in the world. And every captain would get a painting of a ship when they’d spent time on it. So, there would often be four, five or six different paintings of the same ship, as there would usually be more than one individual captaining it over the years.” 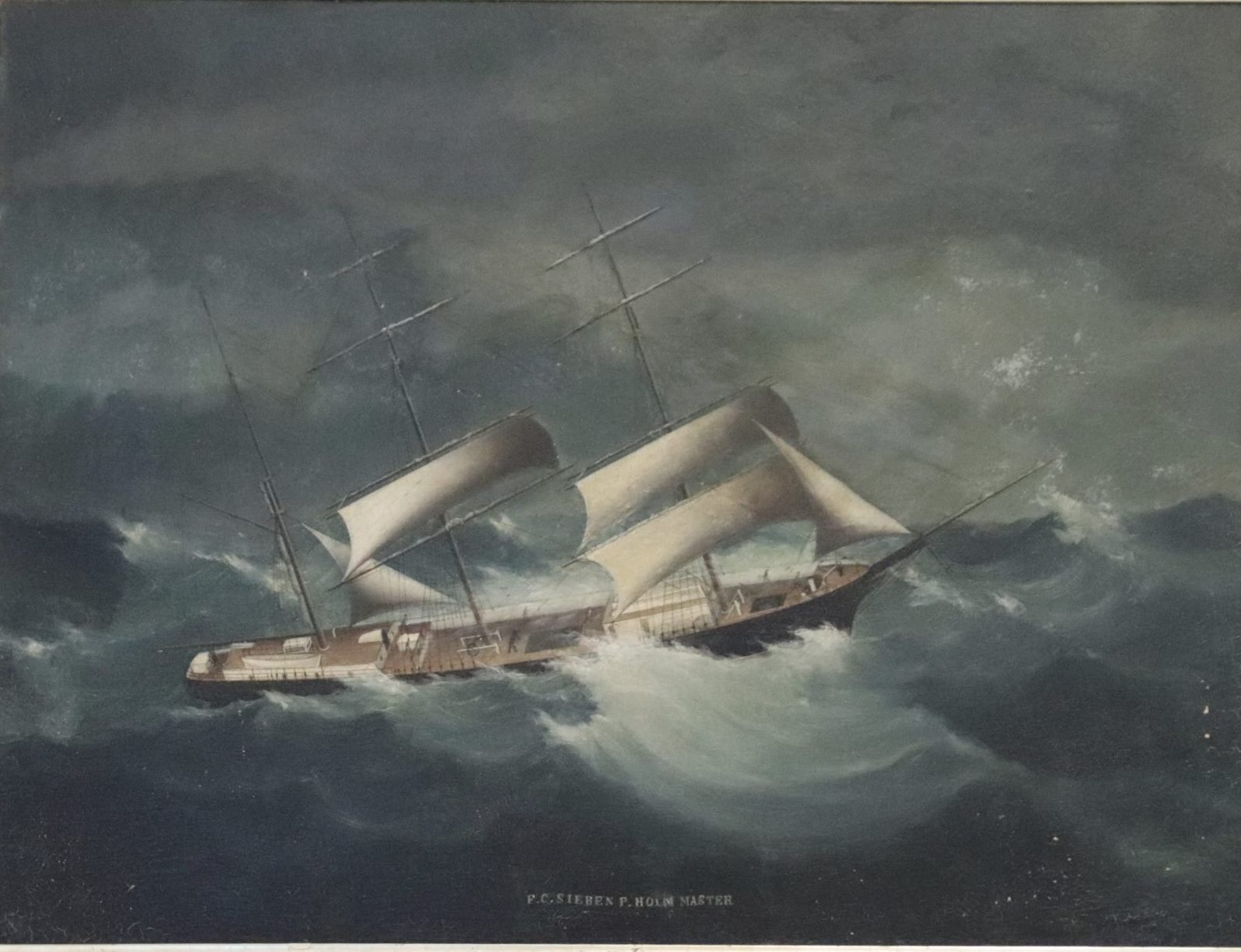 Hans Michael Jebsen’s father was a keen collector of paintings of ships, often from the family company. “He was keen on marine paintings – a ship in a storm, with torn sails, other eye-catching scenes, or commercial vessels with historic interest, even if not from our company.”

Jebsen has expanded its maritime collection on occasion when works have relevance to the company. But there are exceptions, such as the 2005 black-and-white photograph of a Star Ferry against a Victoria Harbour backdrop by William Furniss, a Hong Kong photographer.

Some of Jebsen’s favourite artworks contain backdrops of Hong Kong or other recognisable posts or locations. Scale models of a whole vessel and half models in profile also form a significant part of the artefacts in the collection.

Other maritime artefacts include a bow plate from around 1940 of three fish arranged in a column, which is similar to the Jebsen company logo now. “The fish are mackerel,” Jebsen explains, of the choice of symbolism. “They have to move all the time as they have no bladder to enable them to float – so must keep swimming.”

Some of the paintings in the Denmark-based collection show European ships that did not travel to Asia, such as the beautiful golden-coloured oil painting of Aeolus, from 1831, among several others painted in the decades before Jebsen & Co was launched in Hong Kong. 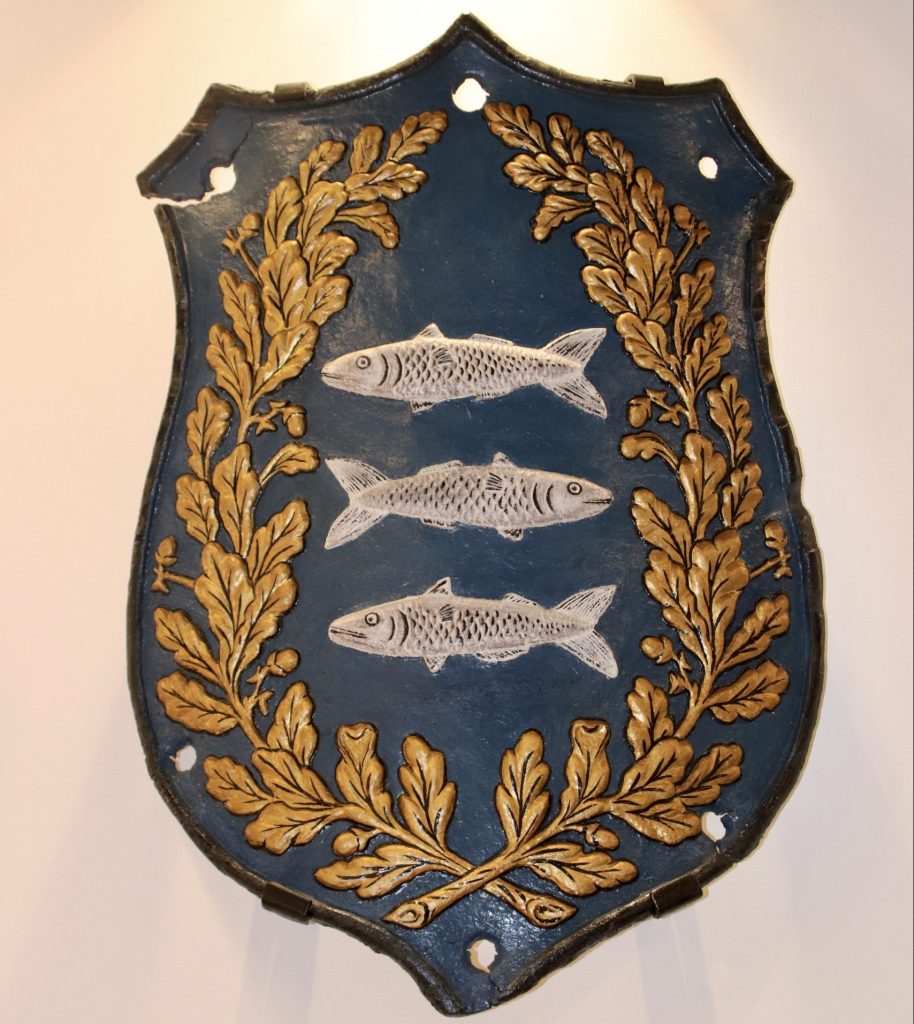 A bow plate from around 1940, similar to today’s Jebsen logo

One of Jebsen’s favourite artworks is a painting of the 19th century tall ship Mazatlan, which the family used for trips to South America. “It’s the epitome of what was the pioneering spirit (of) ships going to being at sea it for months on end. Another one would be the [German] artist Erich Kips – an unusually large oil painting of the Hapag liner, seen in Hong Kong on a grey day in the 1920s or ’30s. It’s interesting to see what other boats were around in those pre-air-conditioning days.”

Today, the Jebsen art collection is housed in museums and company archives in Denmark, with some in Hong Kong. The Jebsen ‘family museum’ (private collection) resides in the 18th century family home in Aabenraa, Denmark, which housed the office of the M Jebsen Shipping company from the 1880s until the 1970s. Some of the family’s collection is or has been also displayed at public institutions such as the National Gallery of Denmark and the Hong Kong Maritime Museum. “Art is to be seen,” he says, “so we try to loan out as much as we can to museums rather than hoard it.”

Hans Michael Jebsen’s interest in the arts and the sea extend beyond his art collection. He has been the chairman of the Asian Cultural Council in Hong Kong since 2004. He is also deeply involved in conservation. Jebsen is a trustee at WWF Hong Kong. He was on the Geneva board of the WWF from 1995 to 2000 and was chairman in the Hong Kong chapter of WWF. “It’s something I feel strongly about – without an intact environment, all other issues become pointless.”

In Jebsen’s time with the organisation, the WWF Hong Kong focused on the development of the Hoi Ha Wan Marine Park. “I find the Mai Po marshes conservation a fascinating area – wetlands are so important to preserve, globally,” he says.

Jebsen has been immersed in a world of rich maritime heritage from birth, but it’s clear the simplest pleasures of sailing still hold as much appeal for him as ever. He is still keen to get out boating in Hong Kong, often on the Group’s company yacht, a Fairline Squadron 78. “The Hong Kong yachting environment is a privilege. There are so many nooks and corners to discover – I manage to go at weekends about twice a month,” he says. After all, sailing is bound up in the family fortune.

“When I’m in Denmark, I love being out on Thea’s simple wooden deck, on the Baltic Sea for some coastal sailing.”