Brunswick Group rebranded itself as a technology company while launching a new, youth-focused model and a series of all-electric outboards from Mercury

During the annual Consumer Electronics Show (CES) in Las Vegas, boating giant Brunswick Group announced the creation of Veer, the company’s new boating brand, which is designed to support electric propulsion and to entice a new generation of boaters onto the water. The first yacht in the new line is the X13, a 4m multipurpose boat designed for ease-of-use, with particular focus on anglers.

The X13 can be powered by either a Mercury four-stroke outboard engine or the new Avator 7.5e electric outboard – the first product in the Avator series by Mercury.

Mercury Avator electric propulsion systems and Mercury Four Stroke outboards, including the Avator 7.5e electric outboard – the first product in the new Avator series by Mercury – which was also showcased for the first time at CES 2023.

The Avator 7.5e has a 1 kWh lithium-ion battery and no connecting cables. It slides into place under the flip-up top cowl. Boaters can bring a spare battery, which can be changed in just seconds, for added range or safety. The Avator 7.5e yields 750W of power at the prop shaft. On tiller models, the power and control display is integrated on the outboard, while console boats can be equipped with an adjustable pedestal display or a sleek, flush-mount option.

The Avator 7.5e outboard comes with a 110W charger, with charging by a standard household outlet. Buyers can opt for a higher-speed charger.

Read: Charged up – How far can electric boats go?

“Recreational boating and fishing are enjoying increasing popularity with younger and more diverse consumers,” said Matt Atilano, Veer Director of Strategy. “We identified a gap in the marketplace and a need to create a more targeted and modern experience for these new boaters, which inspired the design and development of the Veer brand.” 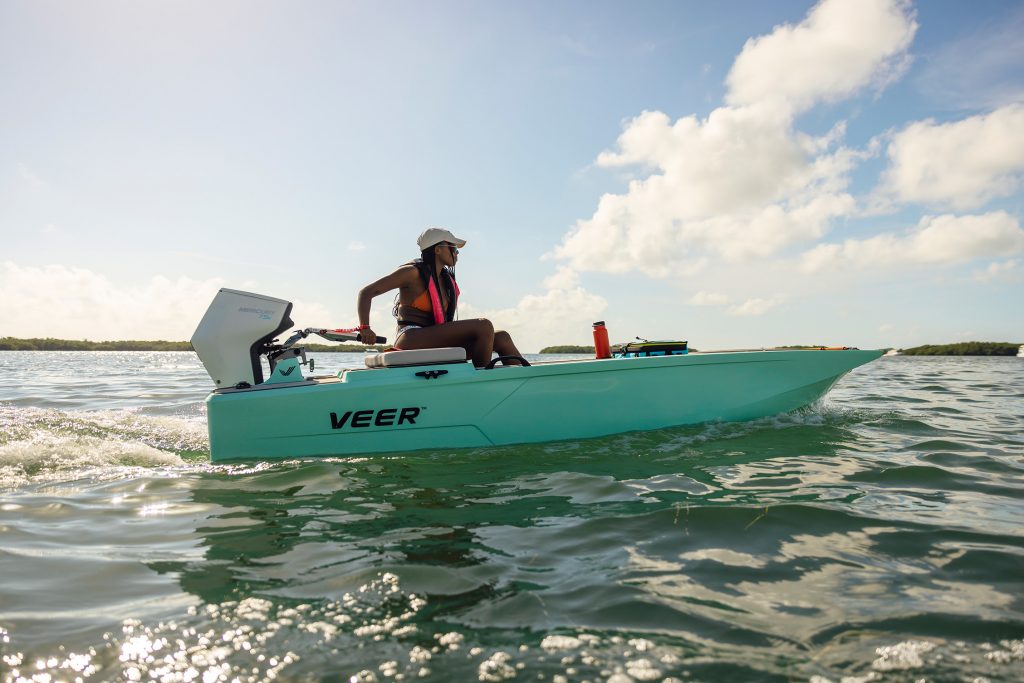 The Veer X13 is designed for easy, all-electric running, as part of Brunswick Group’s rebrand to a technology company

The boat features a very shallow draught for coastal exploration and has optional features such as a shallow-water anchor, SportTrak™ accessories, a mooring cover and a standing bar.

Brunswick also used the occasion of CES 2023 to rebrand itself as a technology company at CES 2023, with a new logo and look that the company says better reflects its focus on technology solutions for the marine industry. Brunswick Group brands include Boston Whaler, Sea Ray, Lund, Freedom Boat Club, Mercury Marine and Lowrance.