Cristina Zenato started pulling fishhooks out of the mouths of her beloved reef sharks. Soon, her kindness was rewarded with friendships with the marine species that humans fear most

The video footage is amazing. A diver covered in a silky chain mail suit reaches into the jaws of a Caribbean reef shark, her arm nearly up to the elbow inside the shark’s mouth. The shark appears to accept this willingly. In a moment, the diver pulls her arm out, a meddlesome fishhook in her hand. The shark swims off but later returns to lie in the diver’s lap, seemingly there to cuddle.

This scene gets repeated over and over, in numerous videos. The diver is Cristina Zenato, a celebrity in the Scuba diving world for her close relationship to her “girls” – the Caribbean reef sharks that gather in the warm waters of the Bahamas. Zenato has names for most of the sharks she has met.

Zenato has been living and diving in the Bahamas for over 20 years and has been fixated on sharks since the Italian first landed in the island nation.

She spoke with Asia-Pacific Boating about why she loves sharks so much and what she has learned about sharks, an endangered species, during an incredible two decades spent alongside them. 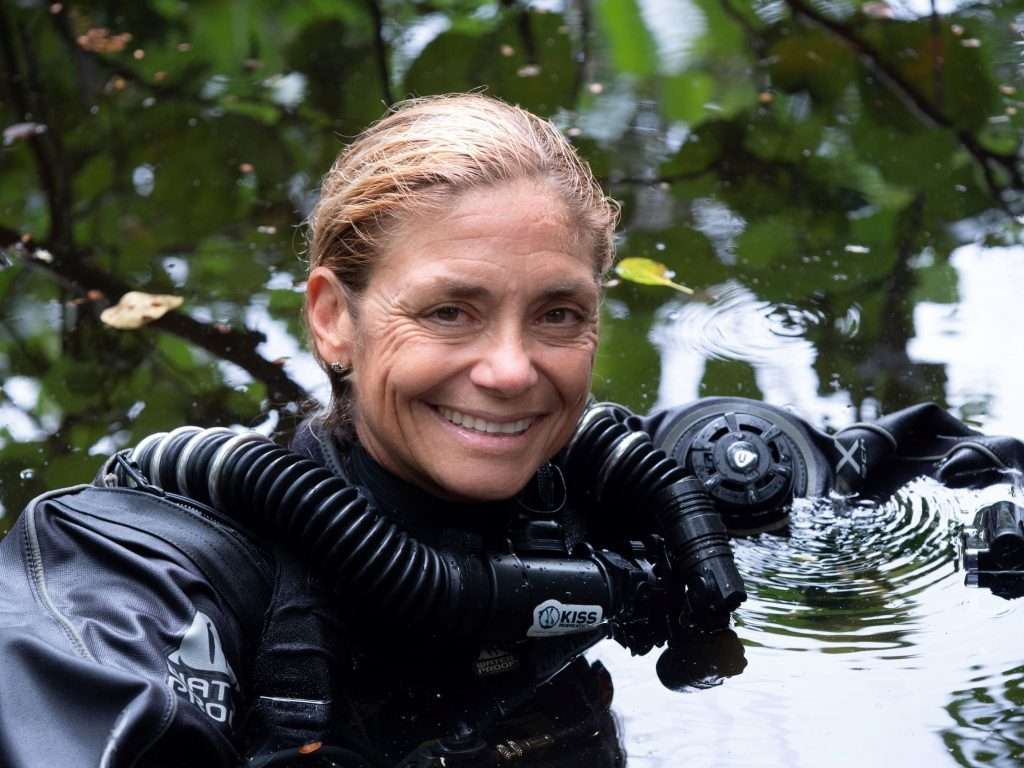 How did you get interested in diving and the underwater world?

It comes from my background. My father was a military diver in the Italian Navy. I grew up with these black and white pictures of him in a rebreather and the richness of the Mediterranean. It really inspired me to want to go below the surface, and he started to take me below the surface when I was three years old, with a mask and fins.

He would be free diving, and I would be following him either with my floaties or floating ring, and I would have my mask and fins on. I remember the part where I said I wanted to free dive too, and he would just grab me and push me down, and I would go about a metre, but I thought I had reached the depth of the ocean.

What brought you to sharks specifically?

In my family, it was said there were no monsters in the sea, only the ones you make up in your head.

My father said: “it is very hard to see a shark; chances are you’ll never see one.” Once, I saw a movie in which this guy was able to swim with sharks and had sharks for friends. So, I decided one day that I would be the Scuba diver that my father was and have sharks for friends. 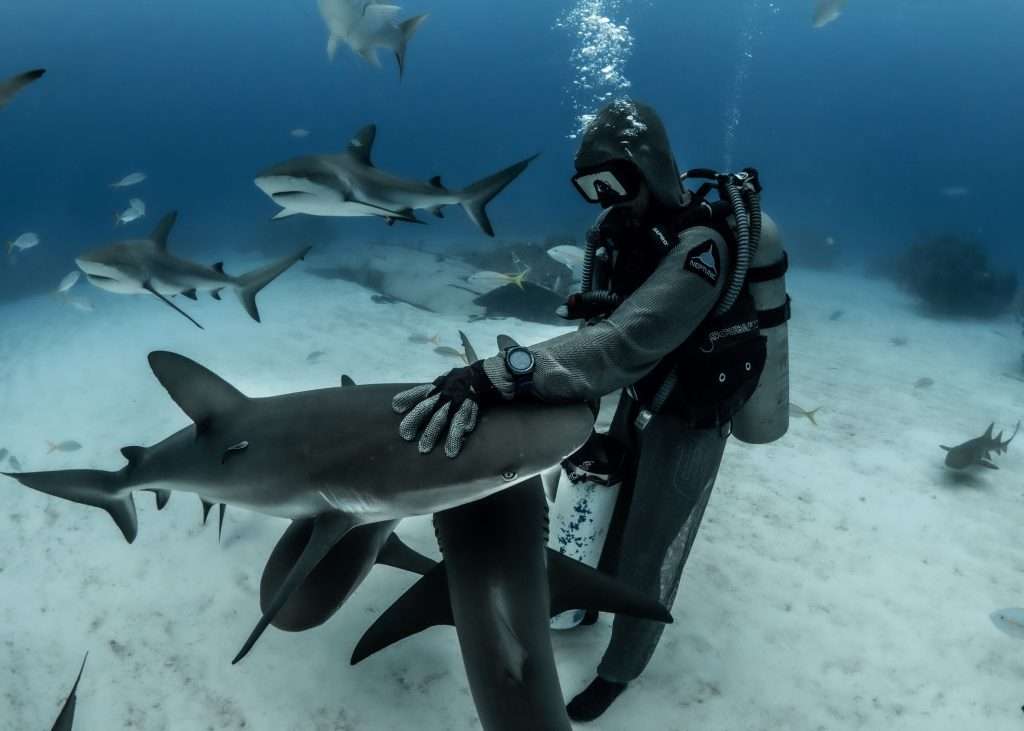 When I landed in the Bahamas for my (PADI) open water course and went below the surface, they had sharks. It was my first dive ever in the ocean. It was 1994 and I was 22 years old.

I landed on this place full of honeymooners, I took my open-water course, and a week later, I came back to Italy and I dropped everything. I was on my way to (a career in) hotel management. I had a boyfriend; we were living together. I had a car. I just dropped everything.

You dumped your boyfriend for sharks? 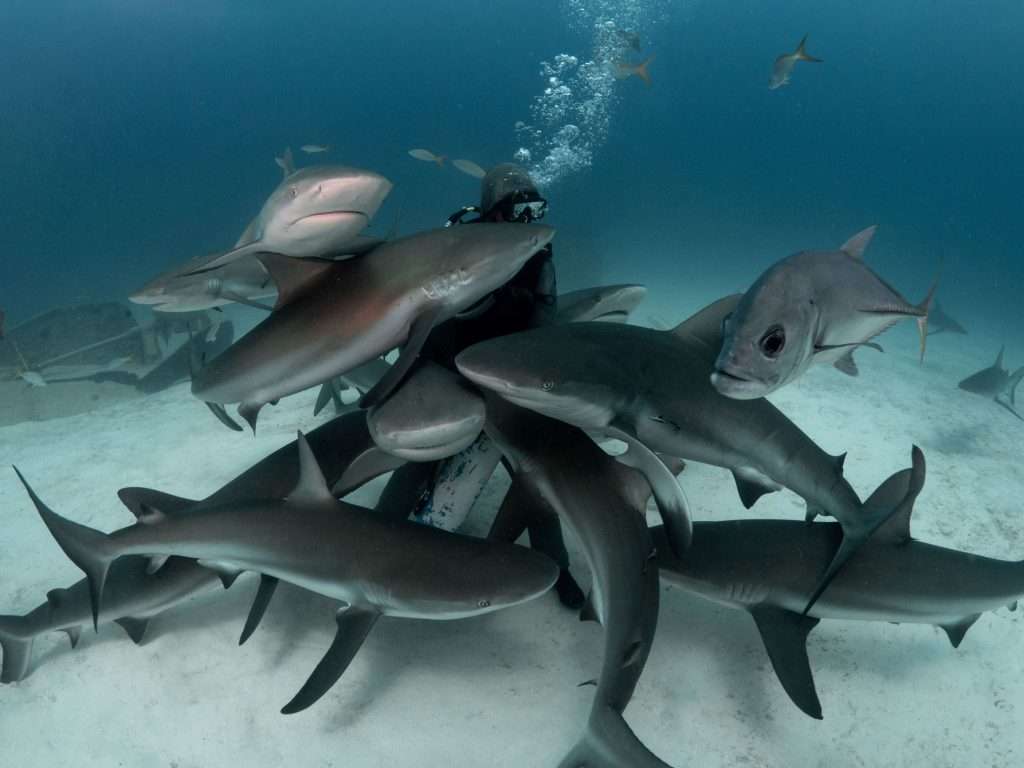 Actually, it was more like, “I’m going to do this because I’m 22, and if I change my mind, I can go back and try again”; I am approaching 50 this year and can’t do that anymore. When you’re 22, you don’t worry about the next ten years.

I thought: “I’ll do this for a year and give it a try. Then I’ll go back to what people call a real job.” After two months, I was like, I’m not going back. This is it; this is what I’m going to do. I found my place in life.

What do you do now?

I’m still an instructor, but an instructor for instructors. I’m also a cave explorer, so I teach people how to do that safely. The biggest job I do is take people with me and do what I do with sharks.

When did you realise that sharks could be friendly? We have a view of sharks as being relentless predators, but what is your sense of the true nature of a shark?

My perceived notion of sharks is that they are extremely vulnerable. We are attacking them on all fronts: directly, through bycatch, fining, destroying where they go to reproduce, by coastal destruction, pollution, fishing nets, plastics pollution and chemical pollution. That is my perception. 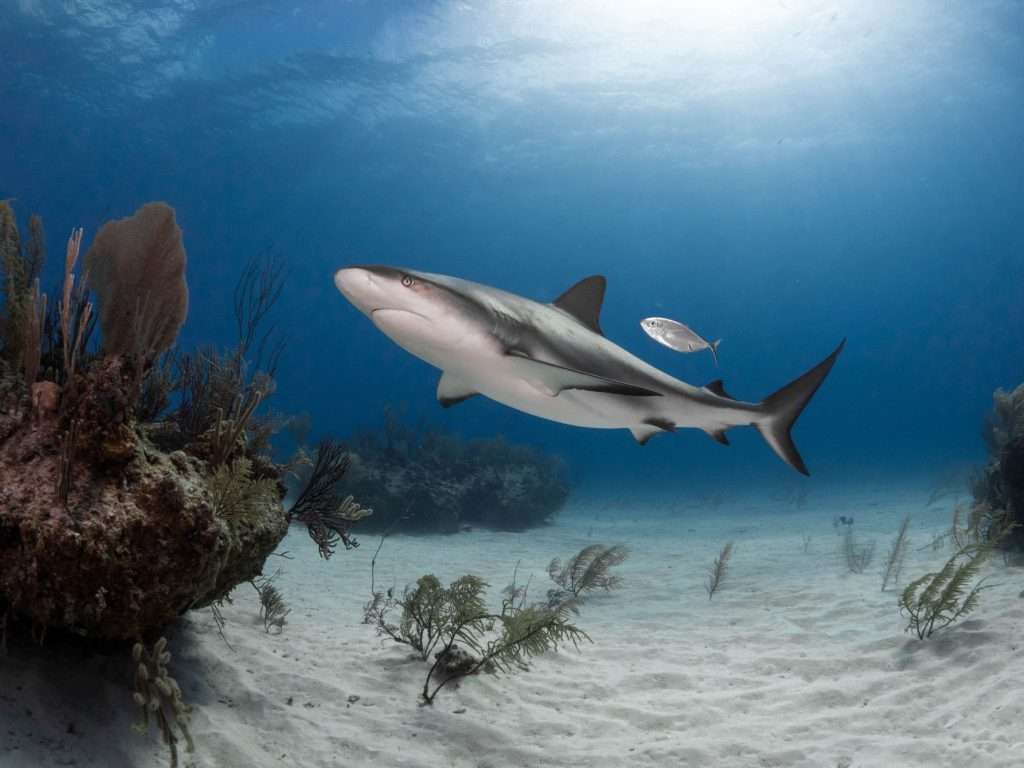 A portrait of Steph by Cristina Zenato

Furthermore, the shark is like any other predator; it is a very cautious animal. When they go for prey, they put themselves at risk and they burn a lot of energy. So, it is not true that as soon as you hit the water, the sharks will come and try to do something.

My perceived notion of sharks is that they are extremely vulnerable

People ask, “why don’t sharks bite you?” They (the sharks) can tell who I am and what I am not, and I’m not a person of interest to them.

When we see footage of you petting or getting close to reef sharks, what’s happening? Are sharks recognising you and simply coming for a cuddle?

One size does not fit all. The way I interact with the Caribbean reef sharks in the video, I would not do with different species. Tiger sharks are much bigger and of a predatory kind.

I think there is a couple of things going on. It is a sense of trust – they feel comfortable in my presence. They have realised there is no harm in what is happening.

The chain mail itself (Zenato wears Neptunic shark suits) is actually very smooth to the touch. A lot of people think that it is the chain mail that makes the sharks go to sleep. But that is not true.

They allow me to pet them. I don’t want to give an anthropomorphic interpretation of shark behaviour. But as when sharks go to a cleaning station (where large marine mammals get parasites eaten off them by smaller fish), maybe the touch of the chain mail feels good. (It) gives a sense of relief, a sense of cleaning.

A shark may be relaxing in my lap, but it is awake. If I move my finger, their eye moves with my finger. If too many people move in too close, the shark swims away.

A shark may be relaxing in my lap, but it is awake. If I move my finger, their eye moves with my finger. If too many people move in too close, the shark swims away. So, there is this balance.

Not all sharks go into my lap. There is a select few, usually the older females, (which are) the dominant, most secure sharks. It usually tends to be the biggest, oldest sharks (to come over) and those that have been there for a while.

It takes time. It takes the right person, the right shark and the right time. It’s not forced; it’s very respectful. If I try to pet a shark and she doesn’t want to be petted, she’ll leave.

Do sharks communicate? What have you learned about how sharks ‘talk’ to each other?

I was always fascinated by communications. I wanted to understand animals. They may not speak a verbal language, but they do speak a body language. Sharks also. 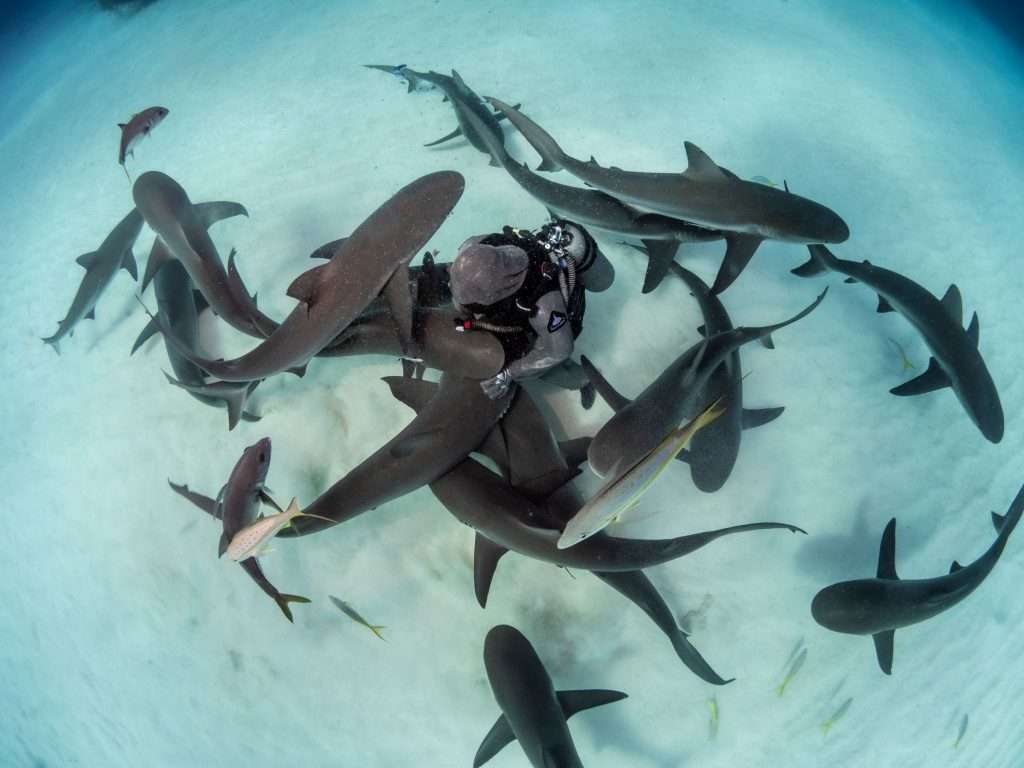 When Zenato started pulling fishhooks out of sharks, other sharks got the message and came for help

This is through scientific research – sharks “speak” through hormones – sharks exude hormones. What I realised is they definitely communicate with each other. They have hierarchies; they have positions in the group; and the big females let the younger ones know who is in charge through body language, the same as a dog will do.

A lot of people ask how a shark can recognise you when you are wearing a mask. I try to tell people that we forget that they have a strong sense of smell. They can detect my skin scent. We don’t (smell underwater) because we have our nose under a mask.

Where do the fishhooks come from?

Sharks have been protected in the Bahamas since 2011. But sharks will be sharks. If somebody is out there fishing, blue marlin or tuna, the sharks will go where nature tells them, which is a struggling fish. So, some of the hooks are indirectly targeting sharks. 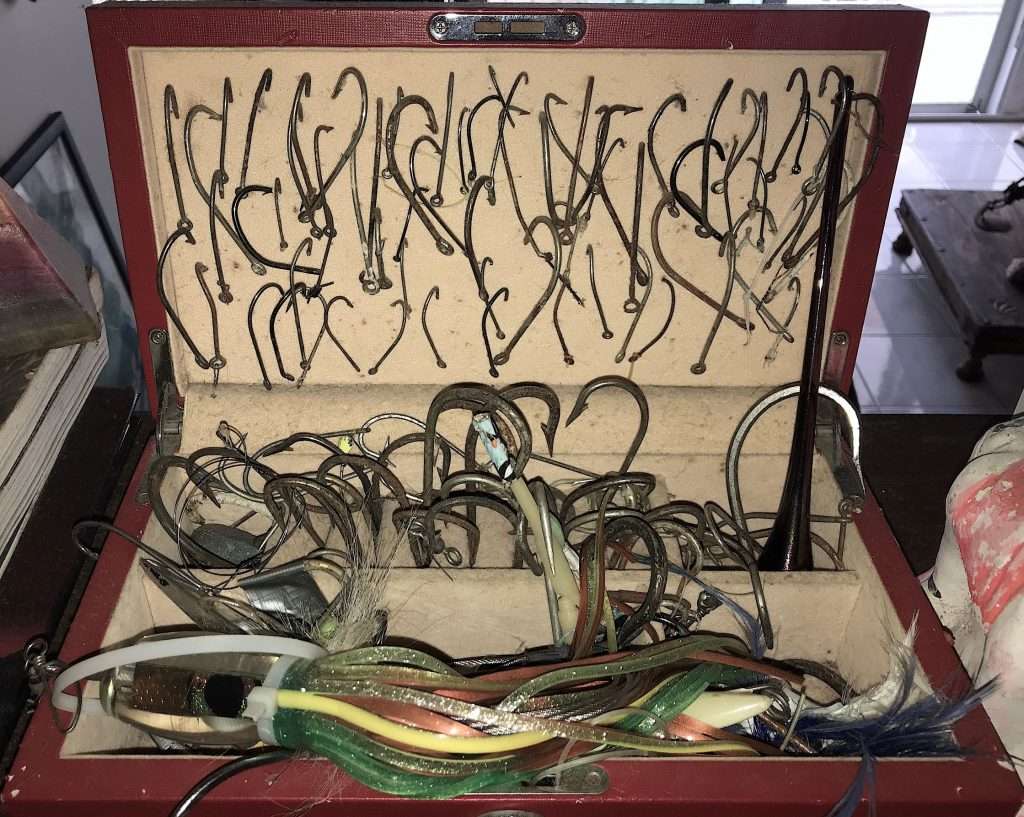 Some of the fishhooks that Zenato has pulled out of sharks. Photo by Cristina Zenato

Some of the hooks make me wonder if they (fishermen) are targeting sharks. You cannot land sharks, so I wonder if people are going for the thrill, they let it go, but it has a hook. Sometimes (it causes) very little disturbance to the shark, but it can be dangerous or cause infection if it embeds by the eye or the gill slit.

For me, removing hooks is like removing a thorn from my dog’s foot. It does not do much for sharks globally, but it has triggered (public) interest.