They’re small, fast and unobtrusive, but something is causing Hong Kong’s pods of finless porpoises to die in droves 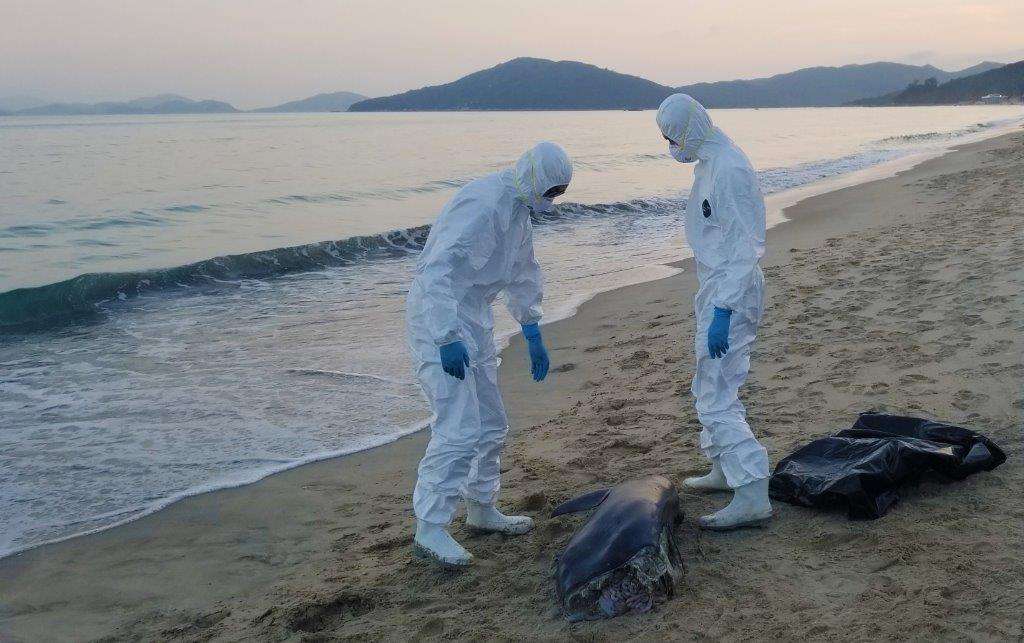 For Hong Kong’s finless porpoises – population as yet unascertained – it’s quite literally murder out there. Sai Kung this February registered Hong Kong’s eighth finless porpoise carcass this year. 2020 saw a brief respite in the grim death toll, an inadvertent outcome perhaps of Covid lockdown and a slowdown in human activity, but 2019 was the worst year since records started in 2006.

According to the Ocean Park Conservation Foundation Hong Kong (OPCFHK), 35 finless porpoises (Neophocaena phocaenoides) washed up on Hong Kong’s shoreline in 2020, in 2019 it was 42. Apart from a brief spike in 2014 (which registered 33 dead porpoises), most years prior to this have seen numbers in the teens and 20s.

For Dr Lindsay Porter, senior research scientist at SEAMAR, a research organisation that studies threatened marine mammals in Asia, getting to the bottom of this marine version of crime scene investigations is hampered by three factors: piecemeal research, the public profile of the finless porpoise and the fact that their carcasses rot so quickly.

“It can be like crime scene investigation but a lot less sexy. Dead finless porpoises and dolphins smell a lot worse than you’d think – they have a really pungent aroma,” Dr Porter tells APB, swallowing heavily as she recalls the countless necropsies she’s assisted in Hong Kong.

“They take a wee bit of getting used to,” she adds, in her reassuring Scottish brogue.

For Dr Porter, who studied aquatic bioscience at Glasgow University and completed her doctorate in marine mammals at the University of Hong Kong, Hong Kong’s enigmatic finless porpoises and the famous Chinese White (or pink) Dolphin have become her life work. 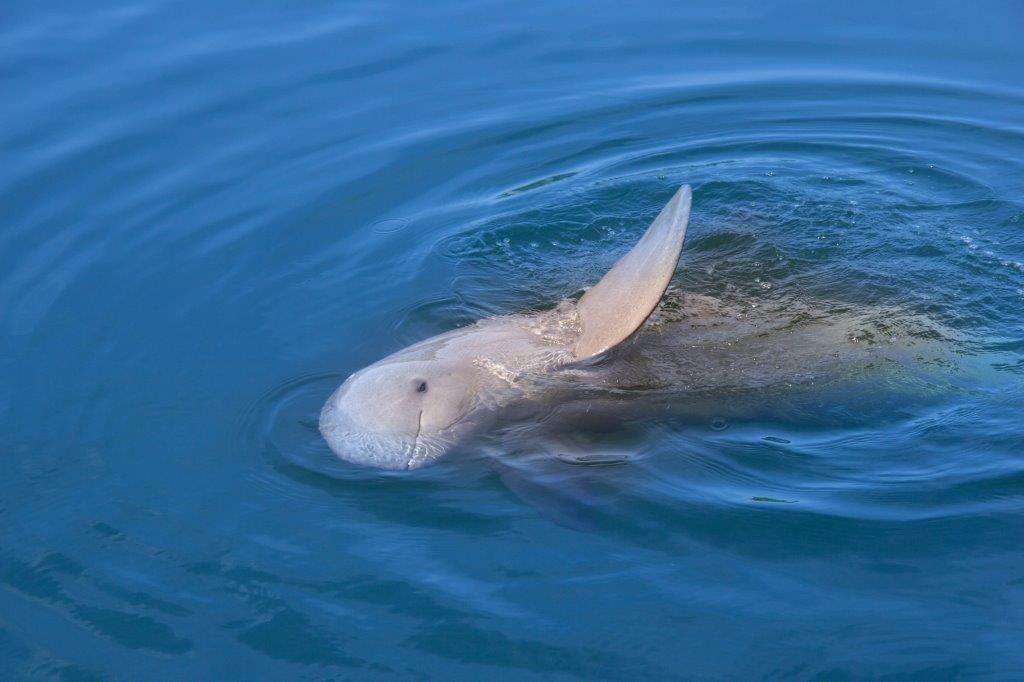 The problem of decomposition for scientists is a serious one. What’s killing the porpoises could be anything from boat strike, to environmental stressors such as marine construction noise to disease. At the moment, it’s still anyone’s guess.

“By the time that you get them from the field into the necropsy facility at Ocean Park (the government contracts Ocean Park to do that) they’ve already almost liquefied – this is for both dolphins and porpoises. They basically cook in their own little blubber jackets.

“So unless it’s something really quite obvious, like a blunt force trauma, we can’t often see what these underlying disease patterns might be.”

The other issue is one of how the samples from these recovered specimens are handled. At the moment, says Dr Porter, the research facilities have yet to pull together their findings. She said Ocean Park, Hong Kong’s marine mammal and theme park, has the facilities to carry out necropsies and right now has samples and stomachs from dead dolphins and porpoises that have washed up in Hong Kong over the past 10 years. 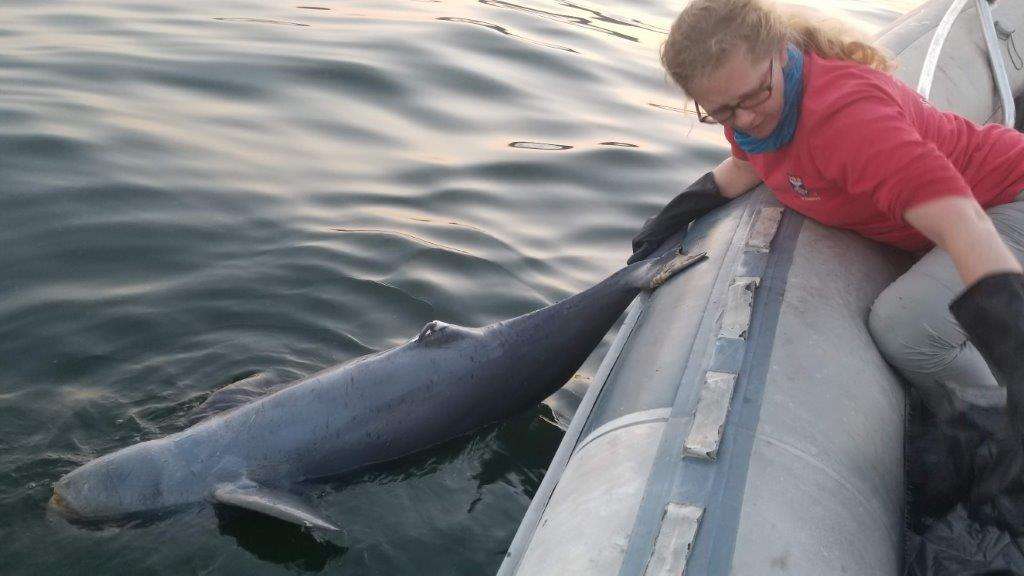 “This isn’t really a criticism, it’s just a frustration, but sometimes we can’t figure out what’s happened to an individual porpoise because organs or pieces of blubber or other samples have been stockpiled for years, different researchers have taken different parts – initially they just said, whoever wants a sample, we’ll give you samples,” she says.

“Ocean Park has yet to say, okay, ‘what is all the analysis that’s been done on animal number 72’ and bring that all back together to tell us what happened to this one animal?’

After some gentle prodding and encouragement, Ocean Park is now allowing scientists to run their own analyses only if they can get data back to them within a reasonable timeframe.

“So it’s my very long-winded way of saying at the moment we don’t know (what’s killing them) because we haven’t really delved into all of the avenues of pathological investigation,” she says.

But work has now ratcheted up a gear. Dr Brian Kot at City University of Hong Kong is doing work with MRIs and CT scans when they can find a carcass that can fit into a scanner. Dr Porter says they are now finding out a lot more about organ damage and damaged skeletal structures which will allow vets to target their investigations when they carry out necropsies. 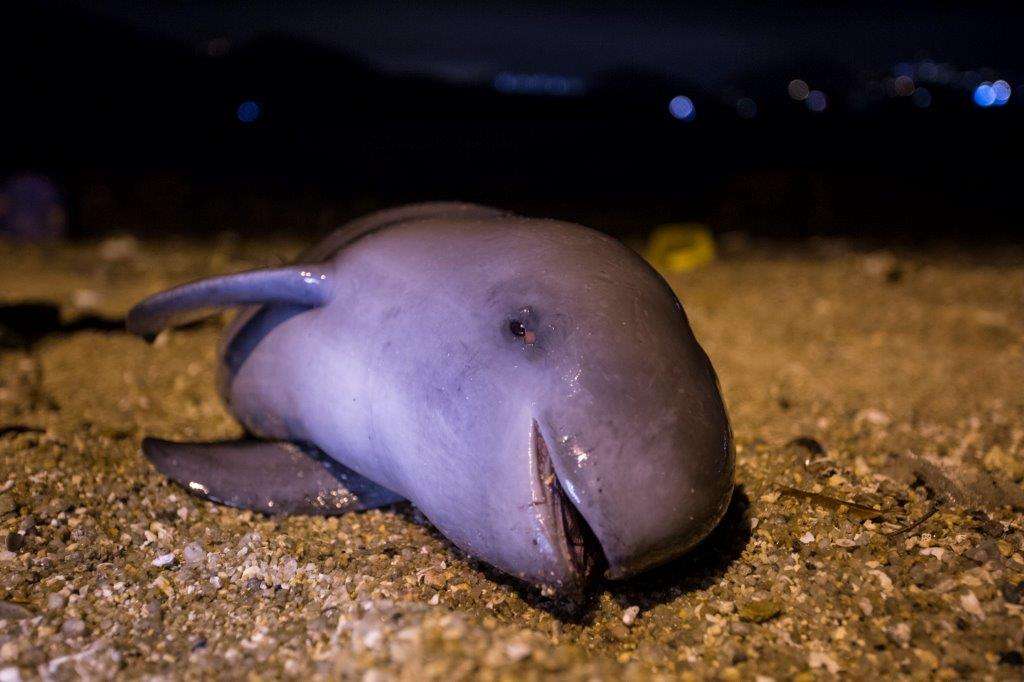 “In the last couple of years, that’s helped us enormously. Brian wrote a paper recently talking about the neck dislocation that he sees in a lot of porpoise, which he thinks is related to boat strikes,” she says. “So we’re getting there. It’s like a jigsaw puzzle. You’re trying to pull together all these pieces.”

Alarm bells were first raised in the early 2000s when level of strandings began to increase. The only available census of total numbers was carried out in 2002 when it was estimated that there were just 220 animals in Hong Kong waters.

Dr Porter says even a basic headcount has eluded scientists.

“One of my scientific problems is that we don’t actually know how many finless porpoises there are,” she says. “The government says that there are about 200 animals, but we’re getting 30 dead animals dead a year – accumulatively it just doesn’t stack up. I would suggest that that figure’s wrong, but to count finless porpoises is really, really tricky.” 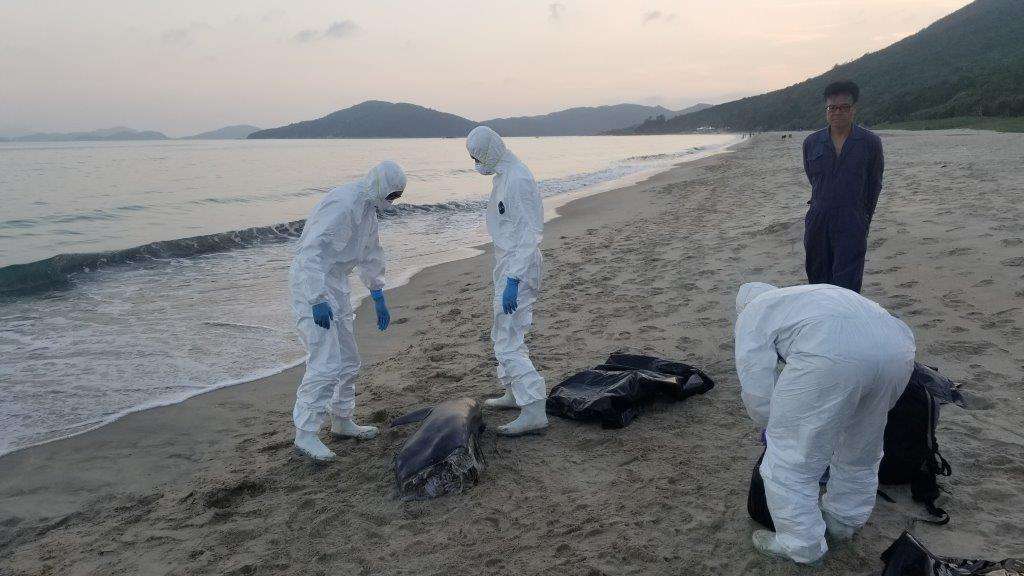 Researchers don hazmat suits to collect the carcass of a finless porpoise washed up on a Hong Kong beach.

The only definitive way to take a census is to send up a helicopter to take a count over a finite space over a period of 60 hours. Even commercial drones, she says, simply don’t have the flying time for a comprehensive survey.

“But to hire helicopters in Hong Kong is eye-wateringly expensive.” The other method would involve Hong Kong’s growing pleasure boat community and a mobile phone app.

“If we could ask X amount of boats to survey all of Hong Kong waters over several days, we could devise a very systematic survey where pleasure craft send us anecdotal information about sightings – if we could build an app it would be really neat to capture an image and a geographical position. I’d need a young techie person for that.”

A drone company recently contacted her about conducting experiments to see if drone flyovers would be feasible, but ultimately the problem still comes down to the vast area of the finless porpoises’ habitat and battery life of most commercial drones. 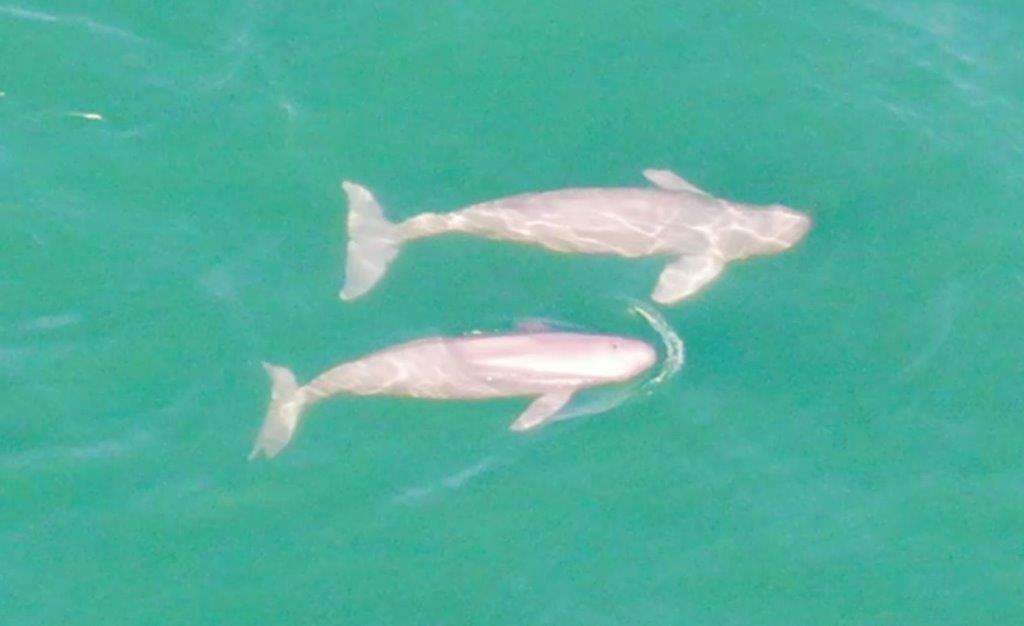 Adding to these problems, and probably the finless porpoises’ greatest handicap, is public perception. As a species they’re fast, they’re shy and they have to compete with Hong Kong’s famous pink dolphins for attention.

Next to the pink dolphins – the Chinese White Dolphin became the official mascot of Hong Kong’s handover to China in 1997 – the finless porpoise is still very much the bridesmaid.

“If you’re out on the water and you’re a member of the general public, you’re not even a scientist or an NGO or whatever, what you’re seeing with pink dolphins are these shiny, shiny bubble-gum pink dolphins,” she says. “Their faces are in this natural grin, they leap out of the water, they tail slap, they have little babies that they have tucked quite close to them and they’re very visible.

“They can be quite active. And even if they’re not particularly active, a pink dolphin in this otherwise browny murky environment is quite spectacular to see.” Compared with this visual spectacle, finless porpoises just can’t compete.

“Finless porpoises are like little torpedoes, they’re incredibly fast, and when they surface, they look a bit like floating tires,” she says. “Hardly any part of their body comes out of the water. Sometimes they don’t even bring their blowhole out properly to breathe. They sort of bring the tips of their head up and then just tilt it so even their backs don’t come out the water. 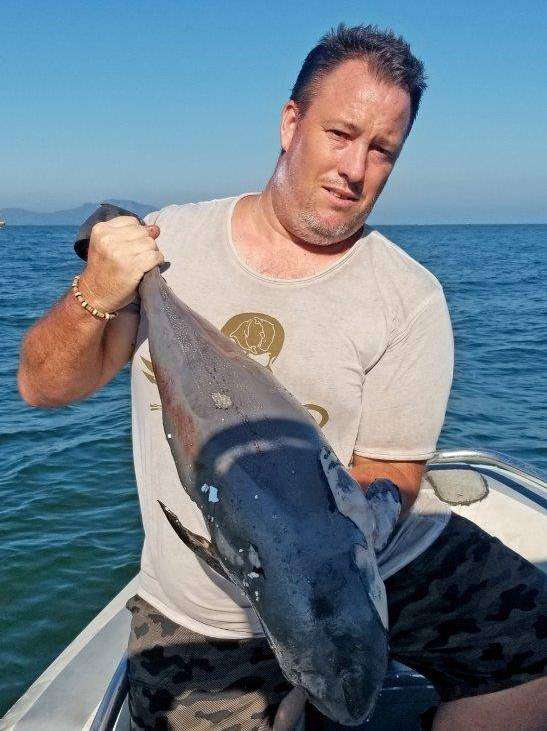 “So when it comes to trying to engage people with a species, if you’ve got something that looks like a floating tyre and something that’s a big smiley pink blubbery thing, then the big pink one wins.”

In May last year, OceansAsia, a Hong Kong-based marine conservation organisation, released a report on the status of the local Indo-Pacific Finless Porpoise populations in Hong Kong. The report also coincided with the release of the first ever drone footage of Hong Kong’s finless porpoise, showing a pod of finless porpoises gathering in Hong Kong waters – a rare occurrence because the animals seldom gather in large groups.

“With the release of this footage of the finless porpoises in Hong Kong, scientists got their first glimpse into the behaviour of these shy animals,” says Gary Stokes, Operations Director for OceansAsia.

“As the late Capt. Jacque Yves Cousteau once said, ‘people protect what they love’ and it is our hope that once people see and know about our resident population of finless porpoises, more efforts will be taken to protect them.” 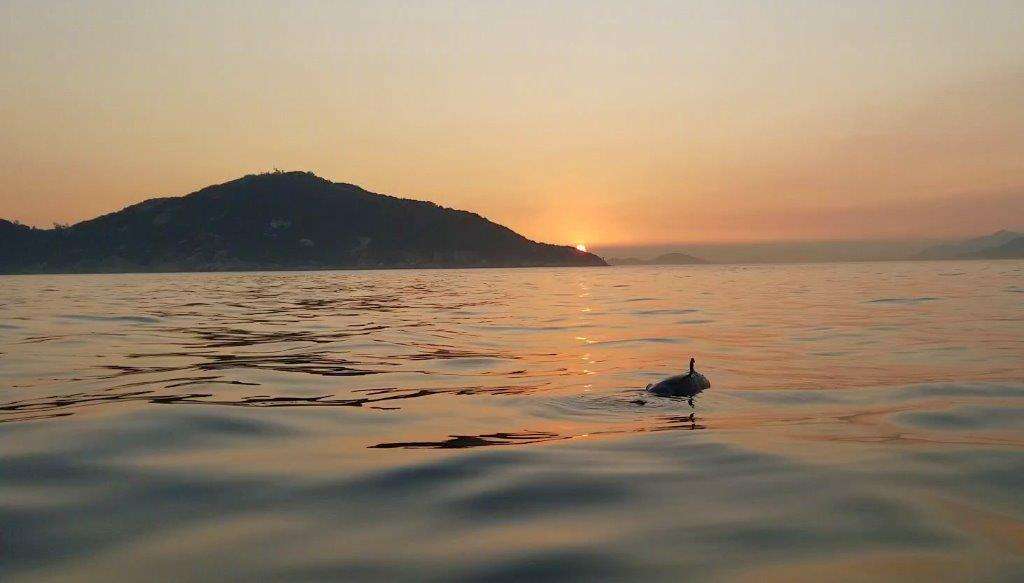 “Alarm bells should be ringing, yet they are not,” says Stokes. “Our aim for this report is to shine the spotlight on this animal before it is too late.” But when is it too late and what is the future for cetaceans in Hong Kong waters?

Dr Porter says the situation for Hong Kong’s dolphins and porpoises is so perilous, so knife-edge, that her answer changes depending on the kind of day she’s had.

“Most cetacean populations have one or two of these problems but Hong Kong dolphins have all of them. All of them are quite challenging to change but then we had the pandemic and the ferry stopped,” Dr Porter says, adding that scientists had registered a huge increase in the number of sightings and the level of socialisation.

“Because there was such a remarkable change in the number of animals and the way that they use the habitat, it made me realize that if we take away that one stressor, we get this positive change.

“So I always say, while they’re still a dolphin left in Hong Kong, I think there is always hope for population recovery.”