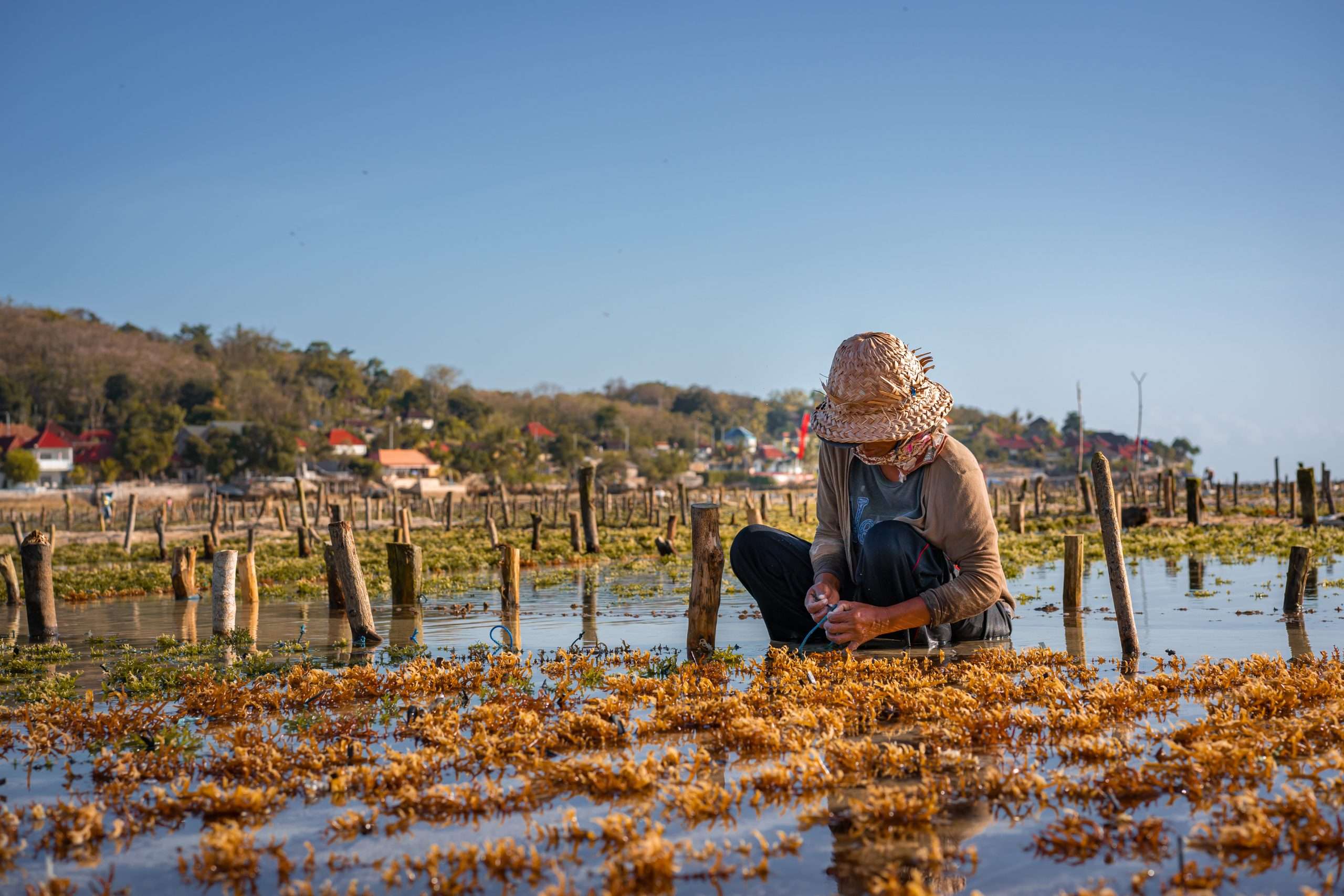 By 2040, the volume of plastic waste flowing into the world’s oceans each year will have tripled, up to an estimated 29 million metric tonnes.

While global efforts to curtail the deluge are growing, with 170 nations pledging to “significantly reduce” the use of plastics by 2030, the scale of the problem remains incomprehensible.

For developing economies such as Indonesia, the challenges of managing this crisis are significant. Some 160 million Indonesians still do not have access to a regular waste collection at home. The Indonesia National Plastic Action Partnership estimates the country produces 6.8 million tonnes of plastic waste each year – the majority untreated and unmanaged, ending up in waterways and oceans.

At the World Economic Forum’s annual meeting in Davos last year, the country pledged a radical plan to become plastic-free by 2040, including reducing marine plastics by 70% by 2025. Yet, for now, the problem is only getting worse.

“Our vision is to create a world without plastic pollution. One of the most important things is raising awareness” – David Christian, Evo & Co 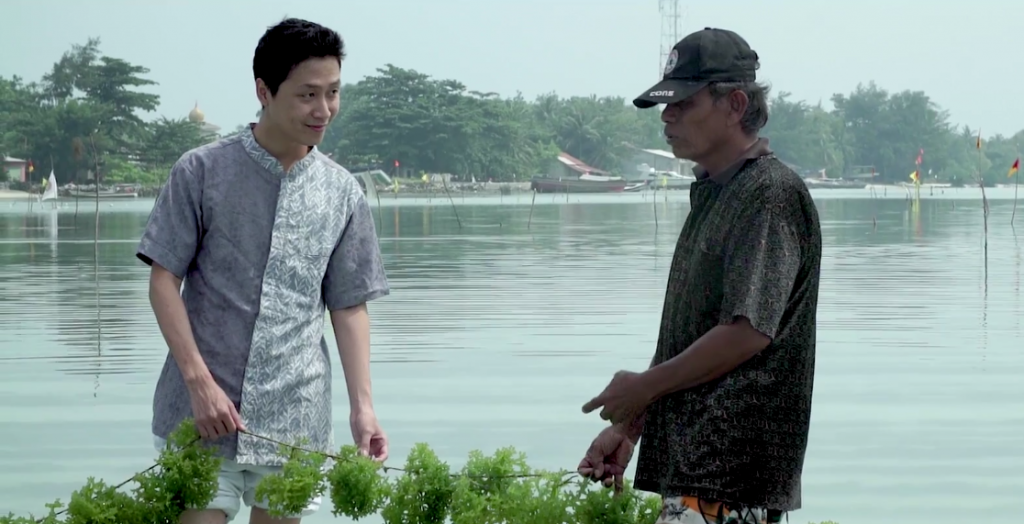 When David Christian returned to his native Indonesia after spending four years studying International Business in Vancouver, he saw the pollution differently. “When I came back to Jakarta, the contrast struck me – from the air pollution to waste on the river and the streets,” he says. “I realised that the problem had always been there; I just hadn’t noticed. It was a concern, and I realised I wanted to do something.”

Evoware’s first product, “Ello Jello”, is a colourful, edible cup made from seaweed and other plant-based materials. It is available in flavours such as lychee and green tea. 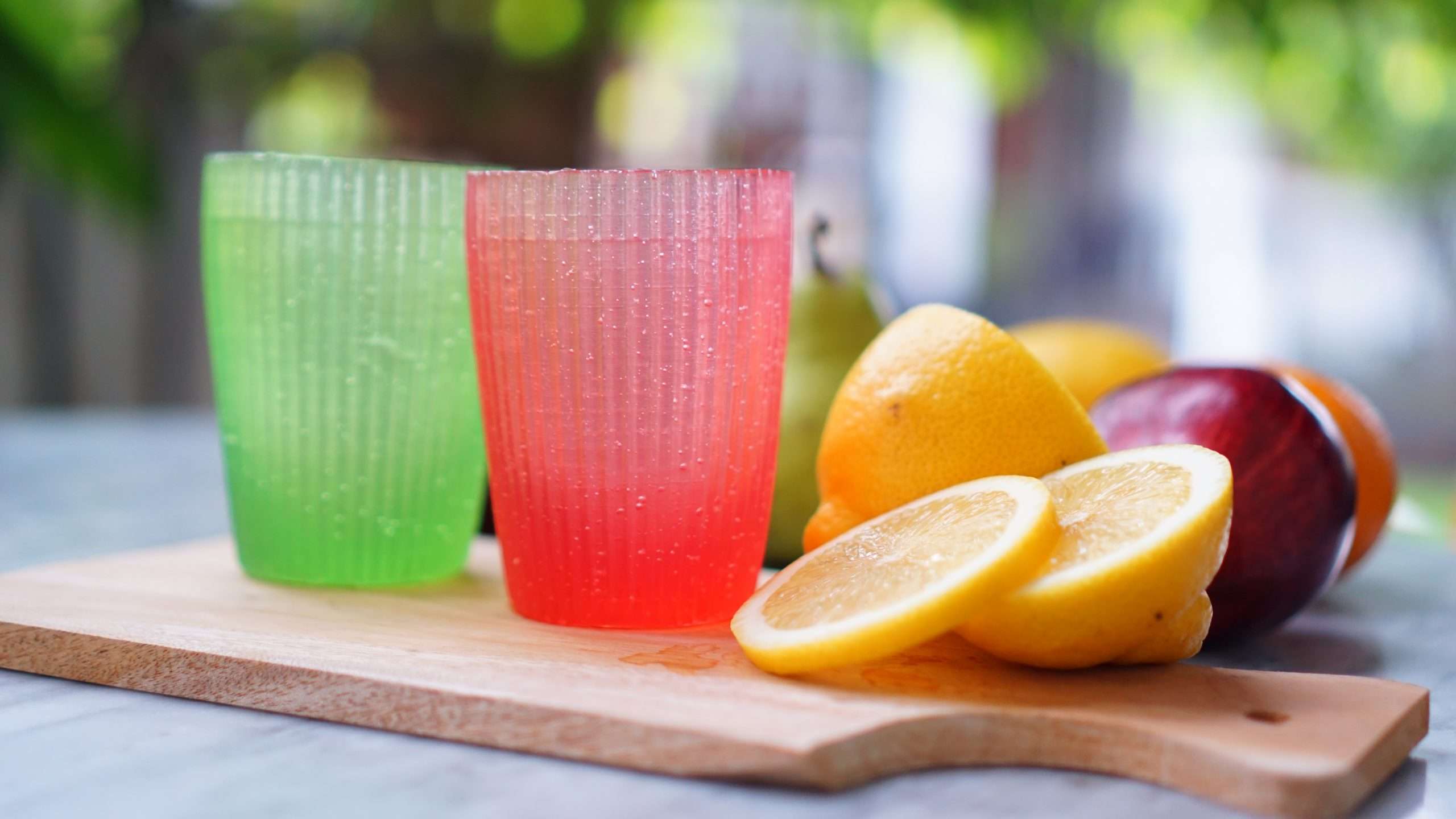 “The idea of the cup itself was first to educate people,” says Christian, acknowledging that the handmade product cannot be made at a scale or low-enough price point to compete commercially with plastic alternatives. “They make parties more fun, it prompts conversation about the topic of waste, and it makes people think about the issue.”

In 2017, Evoware launched its next product – an innovative, seaweed-based packaging used for food films, burger wraps, and sachets such as noodle and coffee flavourings. The thin, edible material quickly dissolves in warm water to leave nothing behind.

Aside from the huge environmental benefit, the company also uses its product to empower the Indonesian seaweed farmers who supply the raw materials. 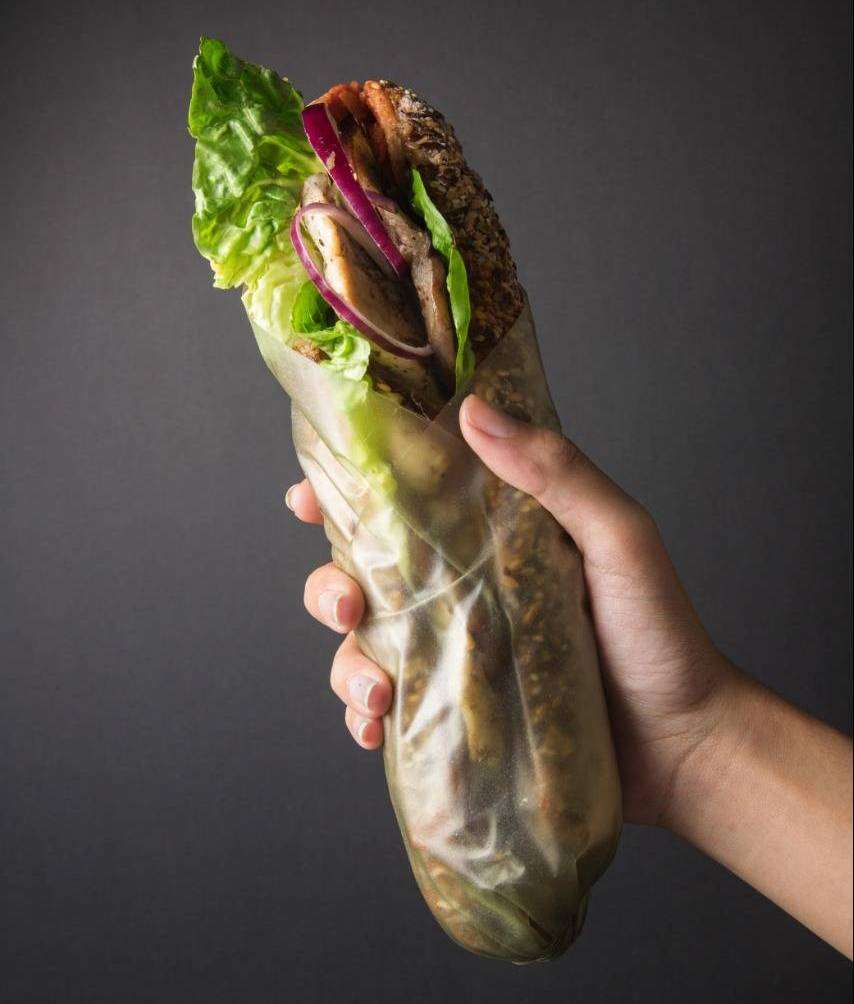 “Indonesia is the leading global exporter of seaweed,” says Christian, pointing out that the county produces over 10 million tonnes of seaweed each year.

“That was reason number one [to use seaweed], we can scale it up massively. Seaweed only needs to grow for 45 days before we can cultivate it, so the yield is very high. Seaweed will improve the marine environment. It produces oxygen – the more we grow, the better!” Indeed, around 70% of the world’s oxygen is produced by marine plants such as seaweed and algae. Seaweed is one of the planet’s biggest carbon sequesters and is believed to be crucial in the fight to slow climate change.

Despite the merits of their crop, seaweed farmers are some of the lowest-paid workers in Indonesia. “Four of the five poorest provinces are the ones that produce seaweed,” Christian says. “They may earn around US$2 per day for an entire family.” 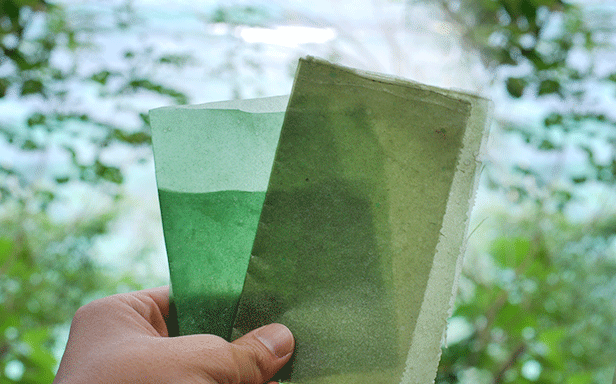 By working with Evoware, a seaweed farmer can seek to earn more than double the average rate.

“Around 80% of Indonesian seaweed is exported – for food; ingredients like carrageenan, as well as cosmetics,” explains Christian. “Because of that, the chain of sellers is quite long, and the farmer is usually selling to a middle man, who boosts the price so they can get a commission before it ends up in the factory.”

In 2017, the company won the “Redesigning Sachet” category at the Circular Design Challenge in Malta – an international competition organised by The New Plastics Economy (led by the Ellen MacArthur Foundation.) The competition focuses on plastic items such as sachets and lids, which are frequently too small or complex to be recycled. 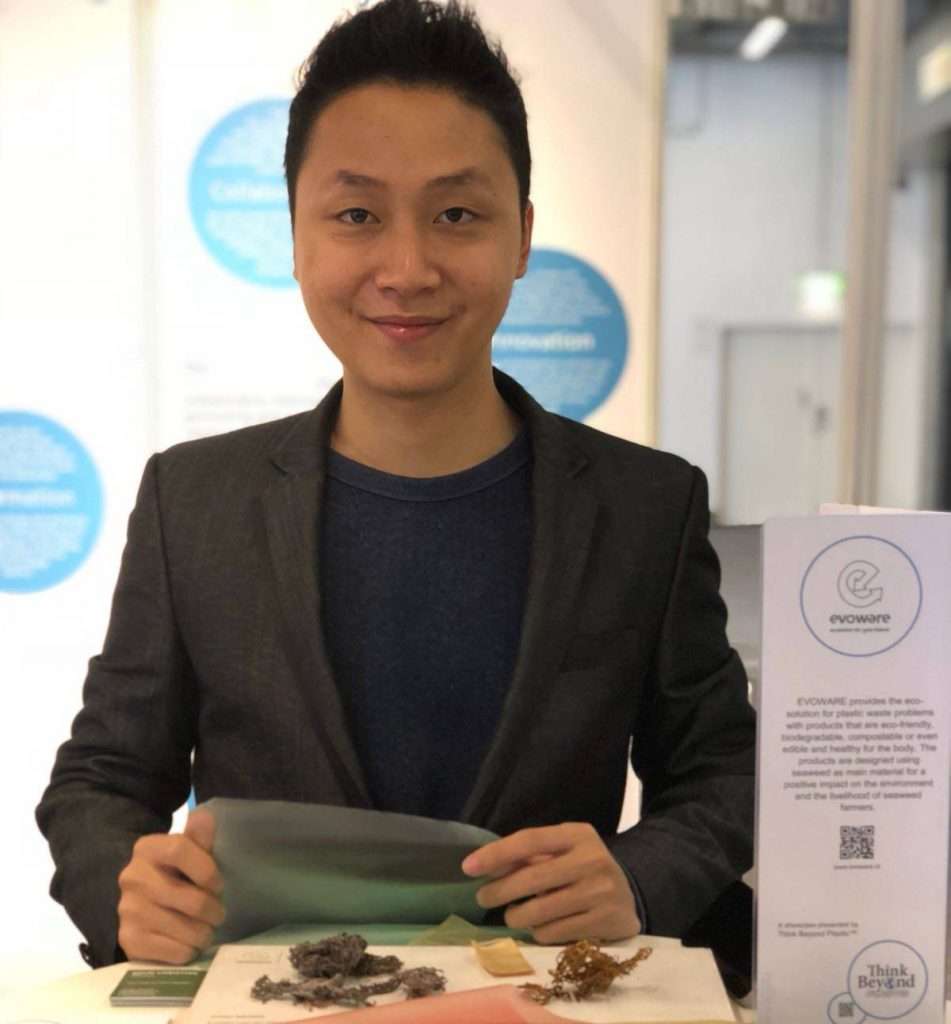 Evoware was the only Asian entrant from over 600 enterprises across 60 countries and took a share of the US$1m prize money along with five other winners.

“We were able to improve our production processes with the prize money,” recalls Christian.

Under sibling brand Evoware, the company has developed a wider range of biodegradable solutions, including edible rice straws, sugarcane food boxes and bags made from cassava and corn starch. Christian says that in 2019 the company replaced 15,143,625 individual pieces of plastic with its products and exported to a total of 52 countries. 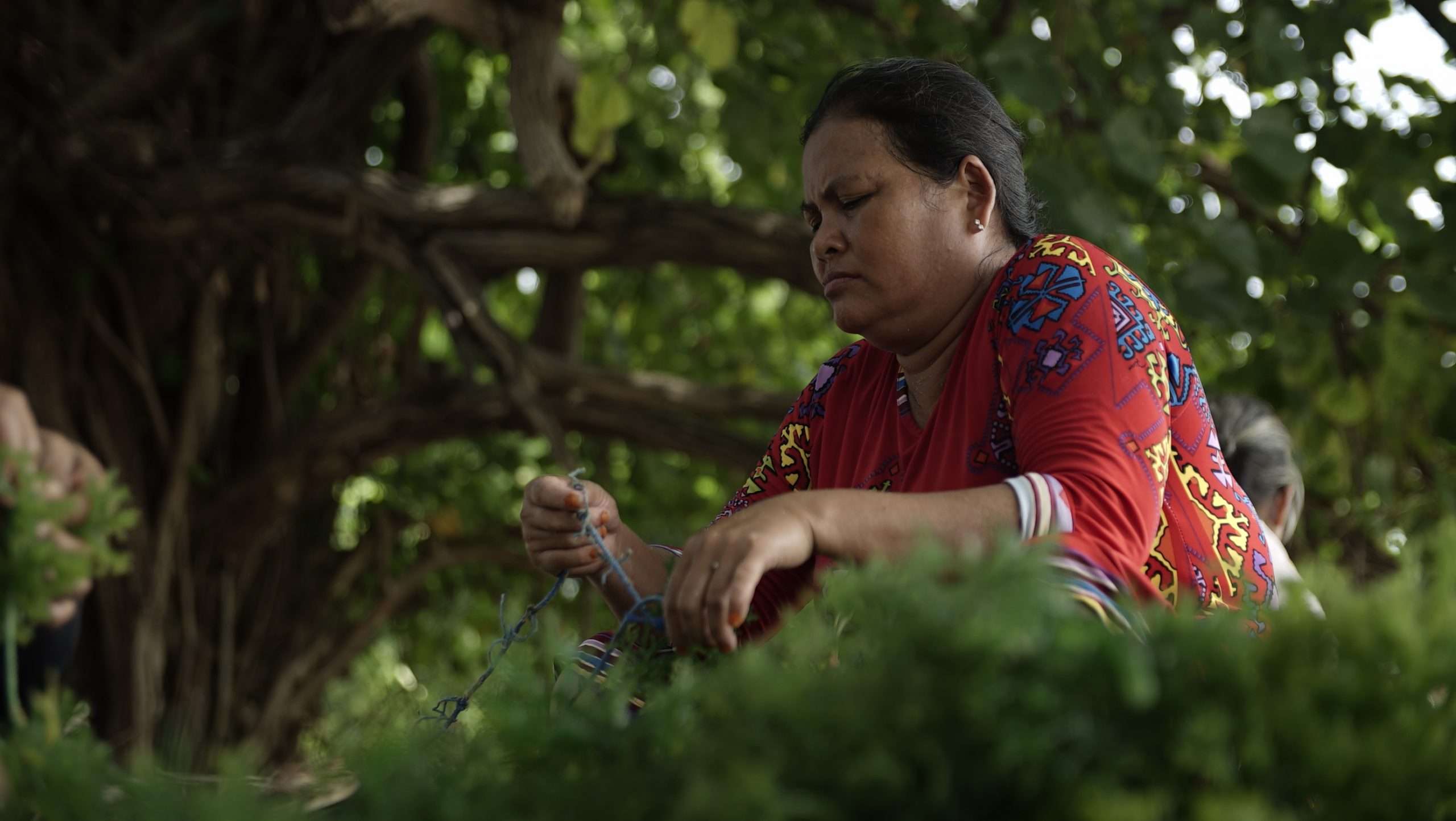 Around 80% of Indonesian seaweed is exported

“Our vision is to create a world without plastic pollution. One of the most important things is raising awareness.”

As the pandemic raged and lockdowns extended during 2020, Christian says the business suffered. “Most of our clients are hotels, restaurants and cafes. We reduced our revenue by around 90% because of Covid. It’s been hard, and things are far from normal, but it’s getting better.”

Comment: We must work with nature to manage it successfully

Judson Berkey, head of sustainability regulation at UBS, explains why understanding nature's inputs is critical to...