All-electric boats are having a moment. Amid the hype and excitement, the big question is: are builders, owners and marinas ready for an electric future? 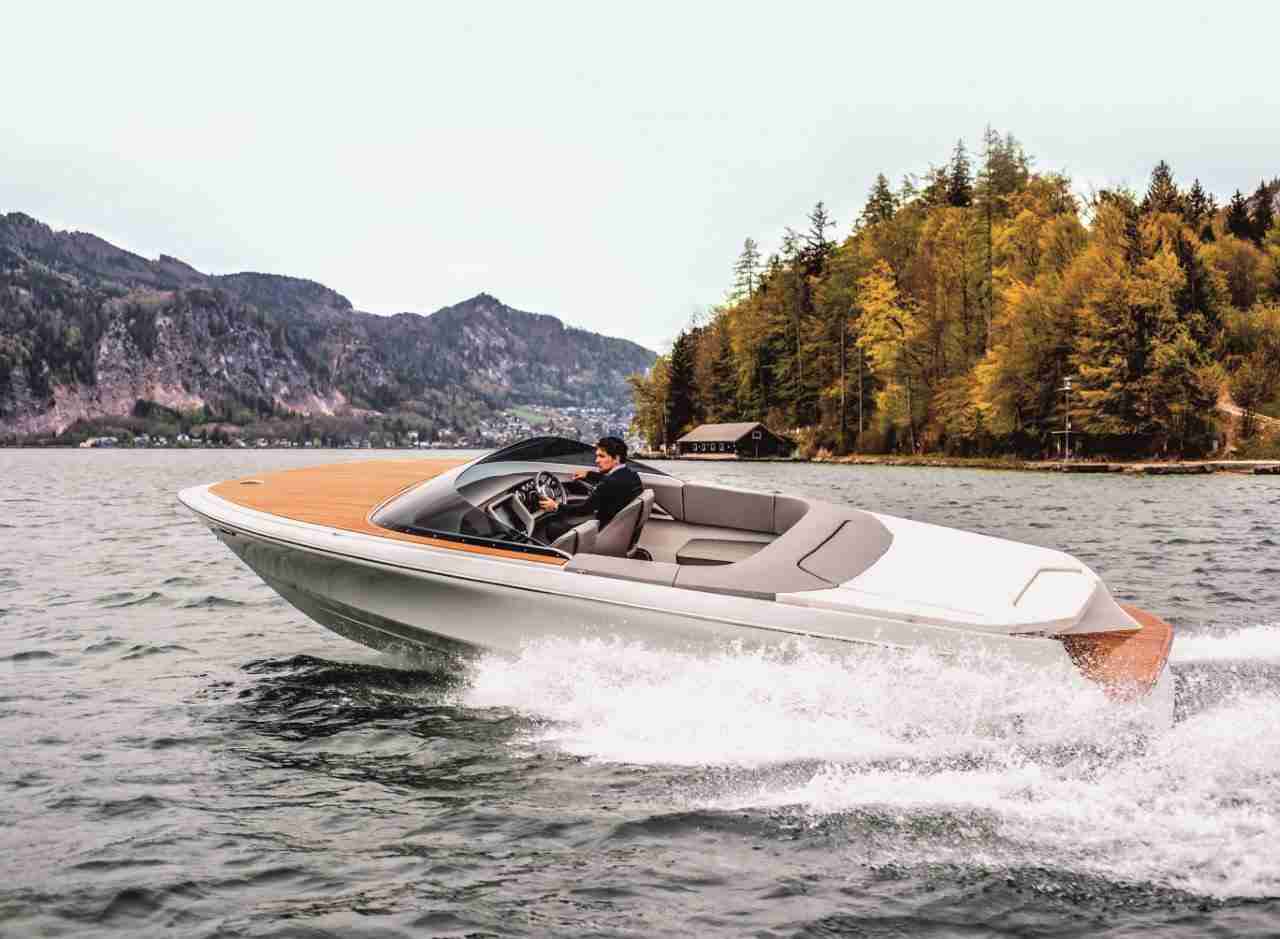 At the 2021 Cannes Yachting Festival, there were crowds to rival the 2019 show. Apart from Covid precautions, one thing was markedly different: show organisers had set aside a pontoon dedicated to the all-electric boats proliferating among European and American builders.

There is plenty of reason for the attraction to an all-electric yacht. On a trial of the Vita Power Lion, a 10.5-metre open boat, the benefits become clear. As the boat powers up, there is a slight whine of the motor but little else. Powering over 6 or 7 knots, the sound of the waves drowns out any other noise you hear. Heading out into the Bay of Cannes, the pilot throttled up the Lion and guests were pushed back into their seats as the acceleration ramped up to over 30 knots very quickly, with no noise and no exhaust odour.

Vita Power was set up by a wealthy start-up entrepreneur, according to CEO Rory Trahair, who wanted to find a way to motor around the Med without emitting carbon dioxide, the primary greenhouse gas that causes climate change. 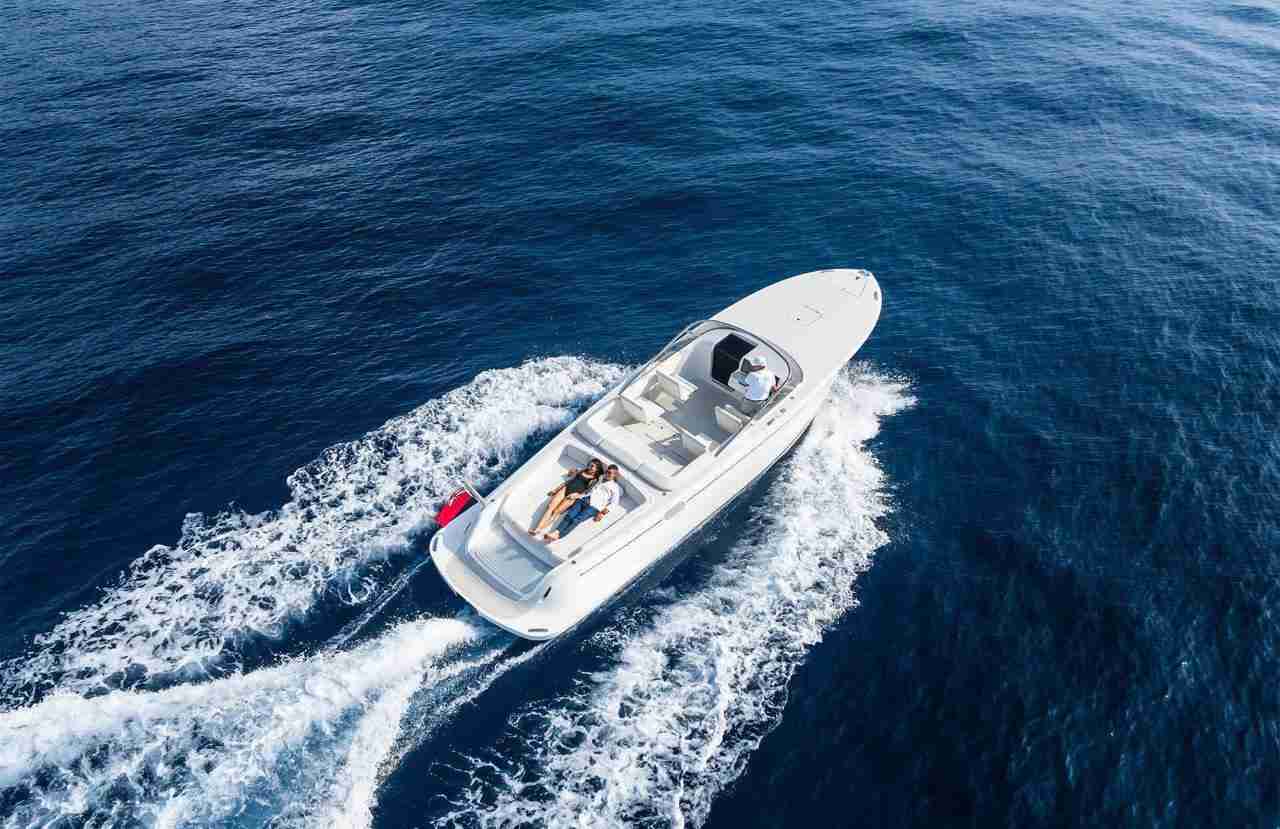 The hype and excitement around all-electric powerboats and larger motoryachts are building just as quickly. In November 2021, actor Will Smith, rapper Sean Combs and basketball star Kevin Durant invested their own money into US-based Arc Boats. They joined Silicon Valley venture-capital giant Andreessen Horowitz, which had already put US$4.5 million into the Los Angeles company. In the same month, US auto giant General Motors announced it had taken a 25 per cent stake in US boatbuilder Pure Watercraft, which is building a range of small craft powered on its unique electric outboard designs and battery packs. Proponents of all-electric boats point to additional benefits: the lack of moving parts in an electric engine theoretically means less maintenance thanks to reduced wear and tear, for one.

As the boat powers up, there is a slight whine of the motor but little else. Powering over 6 or 7 knots, the sound of the waves drowns out any other noise you hear 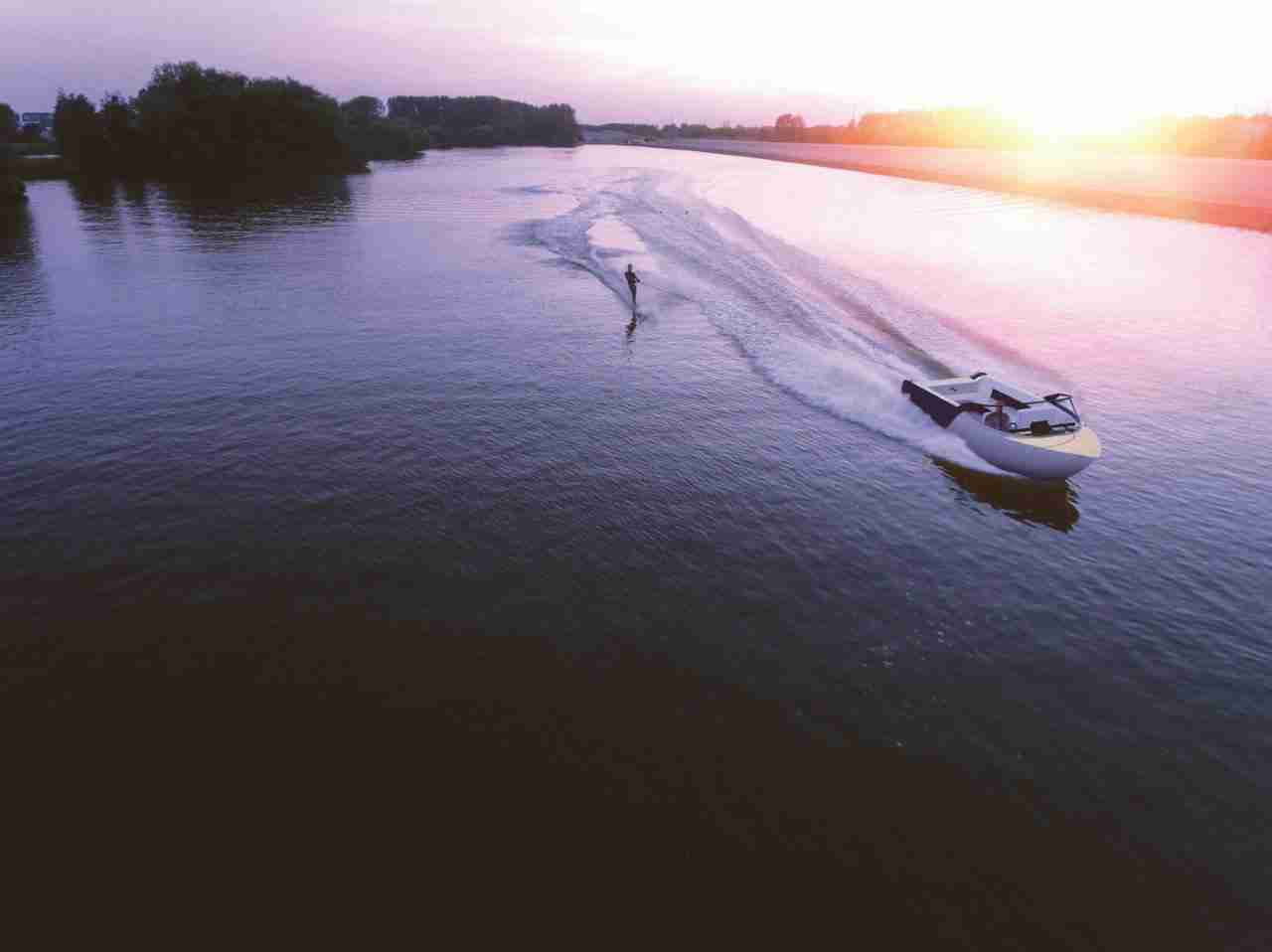 The Arc One, as proposed by former Tesla engineers

“Gas boats are so much more of a pain to own than gas cars… Electric boats solve most of the issues, if not all of them,” said Arc Boats co-founder and CEO Mitch Lee in an interview with Bloomberg.

Boating can have a heavy impact on the ocean and the environment. Burning one litre of marine diesel, which weighs about 800 grams, emits about 2.5kg of carbon dioxide gas. There is more weight to the carbon dioxide gas emissions than the weight of fuel because carbon molecules bond with oxygen molecules in the air to create the gas. Burning one litre of petrol produces about 2.3kg of CO2.

For example, the latest Sea Ray 370, powered by three 300hp Mercury Verado outboard engines, burns about 162 litres of petrol per hour at its optimal cruising speed of 32 knots, with about 5.5 hours of run time, according to data by Boattest.com. Just three hours of cruising could theoretically produce 1,117 kg of CO2 gas – over one metric tonne. By comparison, the US Environmental Protection Agency calculates that the average passenger car in the US emits 4.6 metric tonnes per year.

While there is a lack of moving parts in the engine of an electric boat, X Shore, a Norwegian maker of all-electric open motorboats, says that its lithium-ion batteries need to be replaced every two to three years. Recycling batteries is an ongoing environmental issue, and replacing the batteries is not cheap. The good news is that lithium-ion batteries have become much cheaper and more powerful over the last 30 years, with the price per kilowatt-hour falling by 97 per cent from 1991 to 2018. 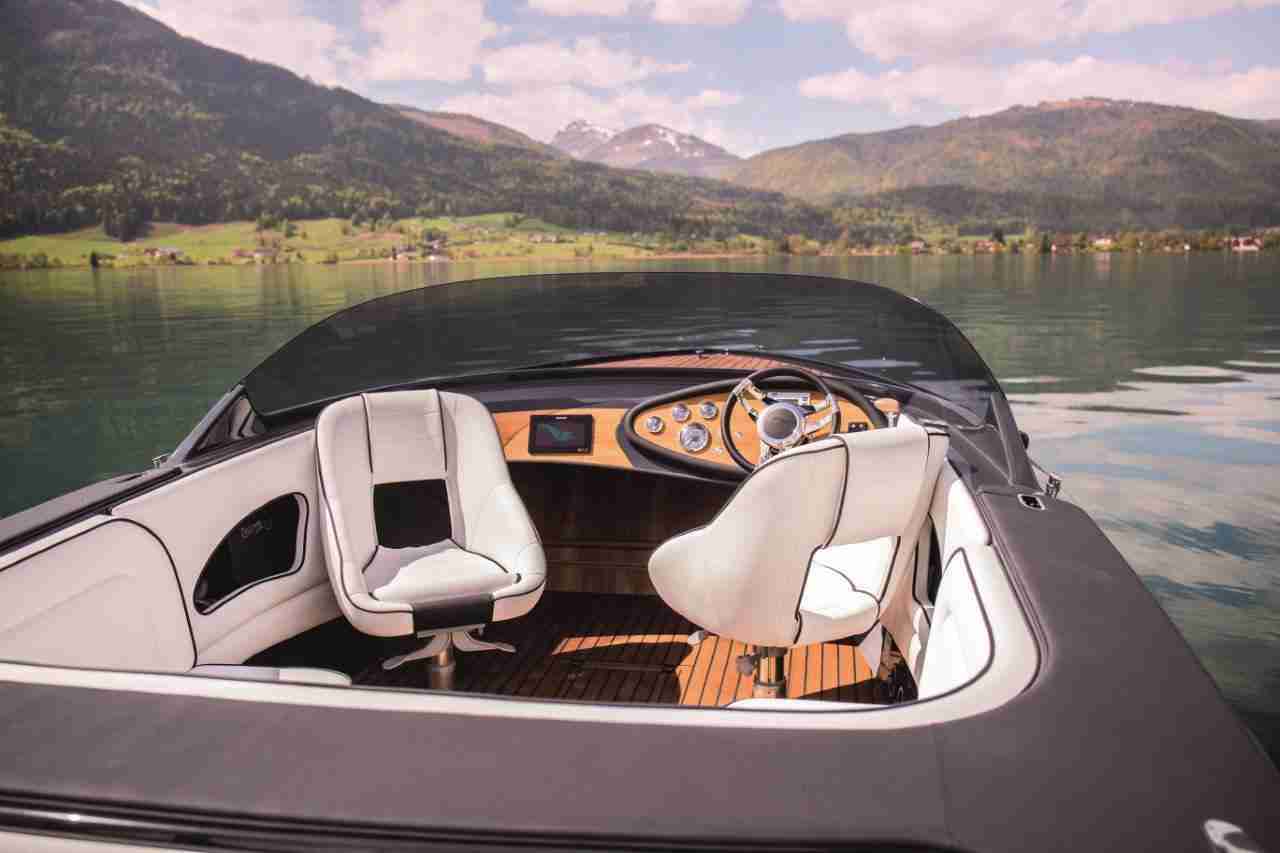 Some makers, such as Austria’s Marian Boats, are building electric runabouts in response to tightening regulations on European lakes regarding motorboats – at some small lakes, they are banned altogether. In 2011, the European Union issued a report citing the damage that motorboats with internal combustion engines could do to local ecosystems and called for their regulation.

Catamarans have been the focal point for all-electric yachting because their wide beam allows for large areas to place solar panels that can charge the batteries. Silent Yachts out of Austria has been leading the charge in this area, but they are not alone. Poland’s Sunreef Yachts has developed Eco versions for each of its catamarans, with the aim of reducing emissions, if not eliminating them. To that end, Sunreef has established an in-house R&D centre. It has also launched a new patented solar-skin technology that builds photovoltaic cells directly into the fibreglass structure of the boat. This allows for even greater coverage and, therefore, more power to charge battery banks.

Read: How the yacht industry is using to tech to fight climate change

A new entry to the market is Alva Yachts, from Germany, which is determined to build up its market appeal globally, according to Dennis de Roos, Alva’s new commercial director. De Roos wants to create a network of five or six big distributors who can take care of a region. In Asia, that means working with one of the big four or five dealerships with active offices throughout the region. 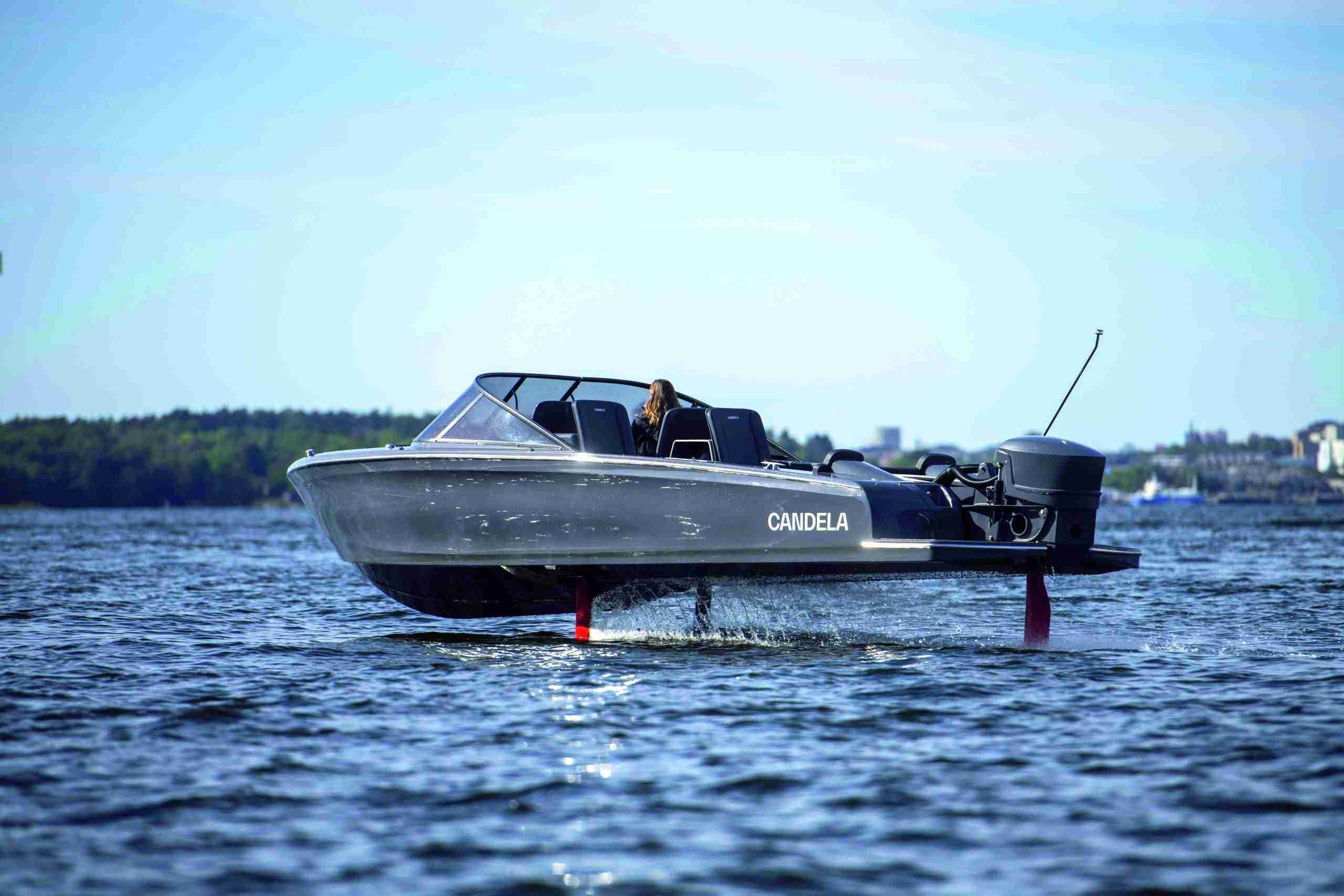 For larger catamarans, the combination of large battery banks, solar cells and diesel reserves allow for lower-emission yachting and long-range operation. Also ramping up their capabilities are the main competitors in the all-electric outboard business, such as Germany’s Torqeedo and Chinese start-up ePropulsion.

The challenge for the new breed of all-electric runabouts is building in a range and run time that buyers expect. Arc Boats, founded by former Tesla engineers, aims to have its first boats in the water in the spring of 2022. For the moment, the price range on an all-electric yacht is higher than combustion engine boats. Arc’s first boat, a 24-footer (7.3m), is priced at US$300,000, about 50 per cent more expensive than a comparable wake boat in the same size range. Marian Boats’ new 26-foot (7.9m), M800 Spyder starts at approximately US$270,000. 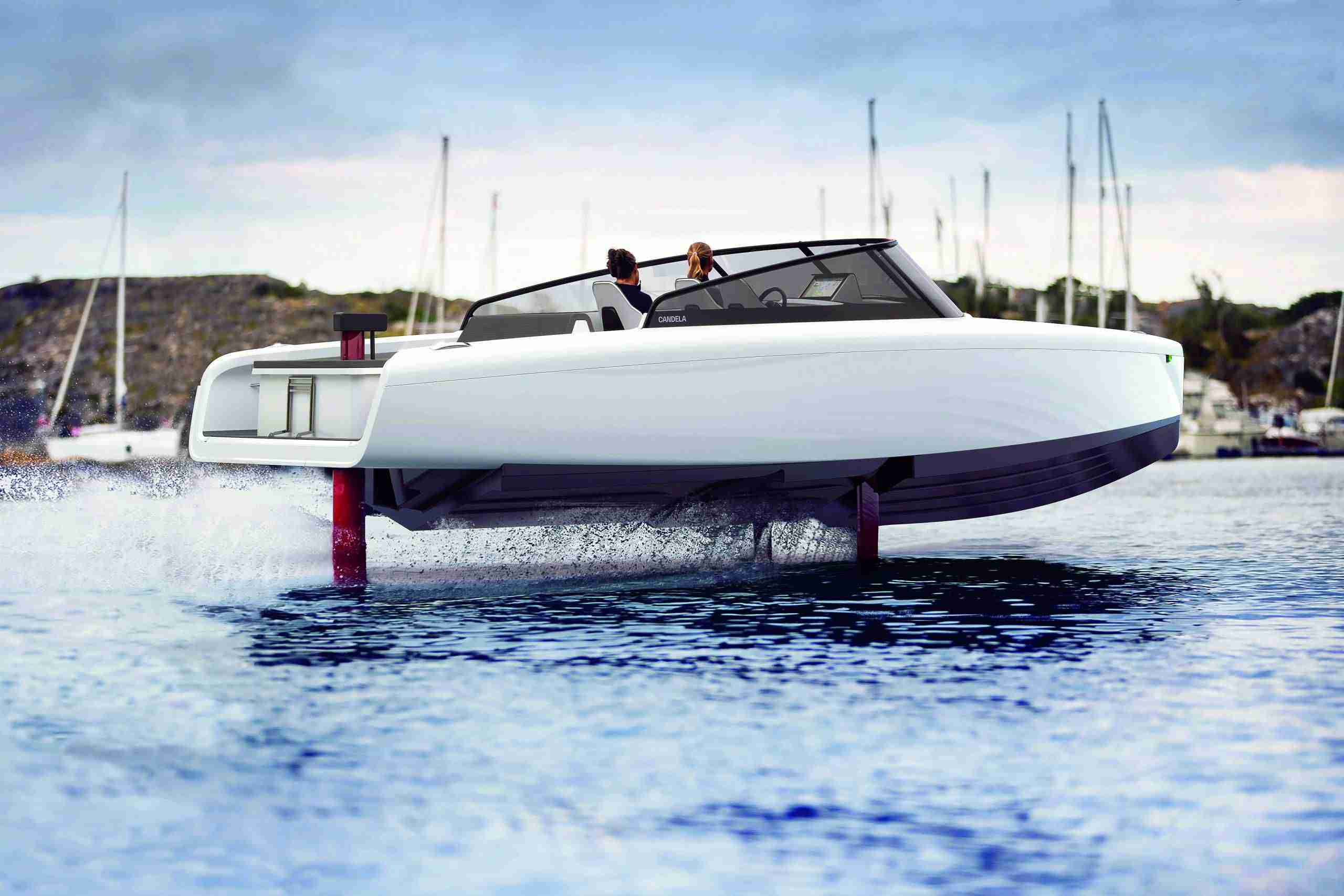 The new C-8 from Candela, which recently secured €24m in new funding

The team at Arc remains tight-lipped on future details regarding the engineering. However, the Arc One will be constructed in aluminium, and they say the hull and batteries have been specially designed to optimise operation. The Arc One has a 200kwh power rating, while the Marian M800 Spyder has a 150kwh. Arc promises a run time of between three and five hours. The other key issue is charging. Marinas already have shore-side power, but that may not be enough to convince boaters to switch to electrics, which require big charge rates to “refuel” when in the same time as petrol- or diesel-powered yachts.

To address this, Aqua Superpower has developed a range of fast charging systems designed for marinas and popular places where runabouts may gather. These charging stations can power AC and DC powered boats in an hour. Aqua Superpower has set up charging stations in Monaco, Cannes and St. Tropez to provide luxury motor yachts with a full day’s worth of cruising, overcoming range concerns. While Aqua is only working along the French Riviera, the company has set its sights on “supercharging” the world’s main recreational boating grounds, including Hong Kong. 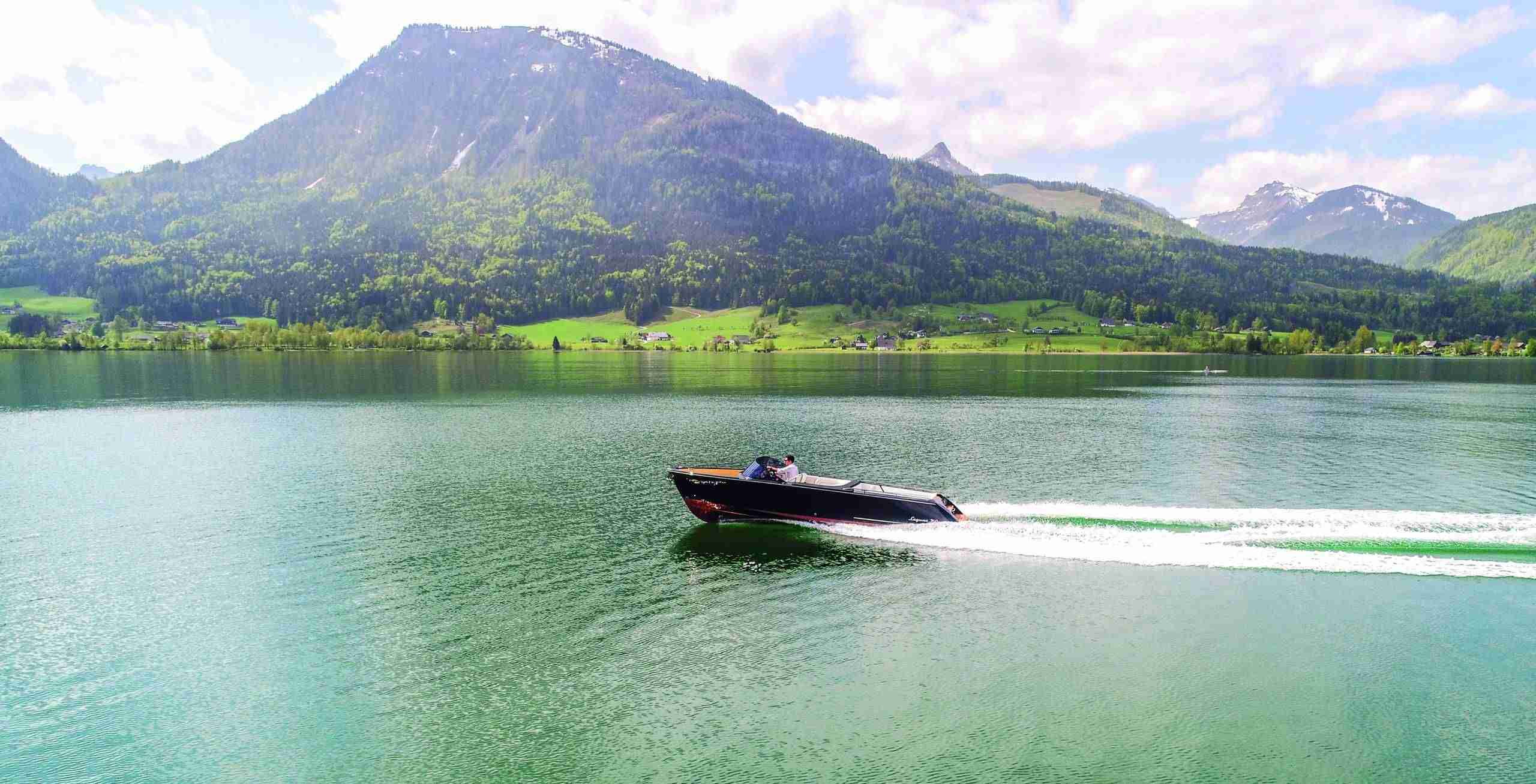 Could all-electric powerboats find their way out to Asia? In Europe, the charge is led by small companies like Vita Power, X Shore and Marian. But the big brands are also watching this space carefully. In a recent interview with Asia-Pacific Boating, Beneteau brand director Yann Masselot noted the launch of the Oceanis 30.1 sailboat, which is electric-only.

That yacht is intended for lake users in Europe, but Masselot said the feedback would help drive future innovations in all-electric boating at Beneteau. Delphia, a boat brand acquired by Beneteau in 2018, has announced that it will only build all-electric boats by 2024, with early marketing suggesting that its yachts would be for lake and river cruising.

Electric boats were first used in the mid-19th century, and they were only displaced by gas- and diesel-powered options in the 1920s. But concern over climate is building, and boaters who appreciate the seas are getting onboard. Dennis de Roos of Alva Yachts was formerly with UK-based Fairline Yachts. He said that his conversion to the need for sustainable alternatives came when he joined his daughter on a march supporting Greta Thunberg.

Amid all the power play, one thing is clear: the charge for an all-electric future in boating is on.