Texas-based FunAir can turn any yacht into a playground with a dizzying array of custom inflatable toys: from vertiginous slides and climbing walls to floating islands and lagoons. MD John Courtney explains why working with designers and owners on new-builds is behind the company’s buoyant success 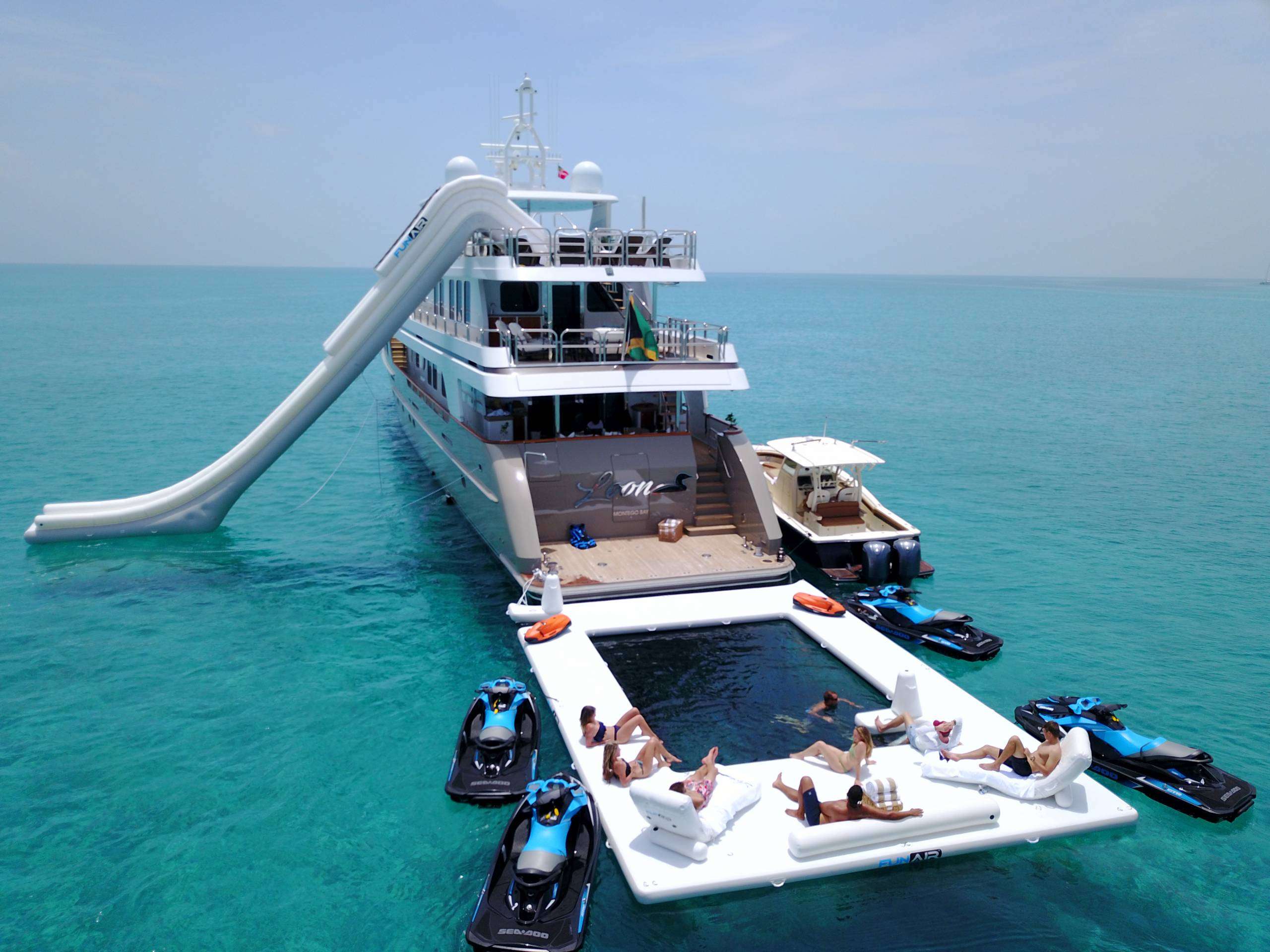 In 2018, luxury superyacht Loon became an Instagram sensation. But it wasn’t the 47-metre Christensen-built charter herself that attracted attention on the social media platform. Instead, it was the yacht’s inflatable sea pool – placed prominently in most of its promotional images – that captured the clicks and imaginations of millions around the world.

It’s easy to see why. The custom-made FunAir Beach Club Sea Pool, fitted to the back of Loon’s swim platform, is simple yet enticing: a square of azure ocean, framed by an inflatable deck laden with resort-style ‘Wave Loungers’ for sunbathing. A set of patented SeaStairs aid getting in and out of the water with grace, while a tightly woven net prevents unwanted critters from entering the swim area. 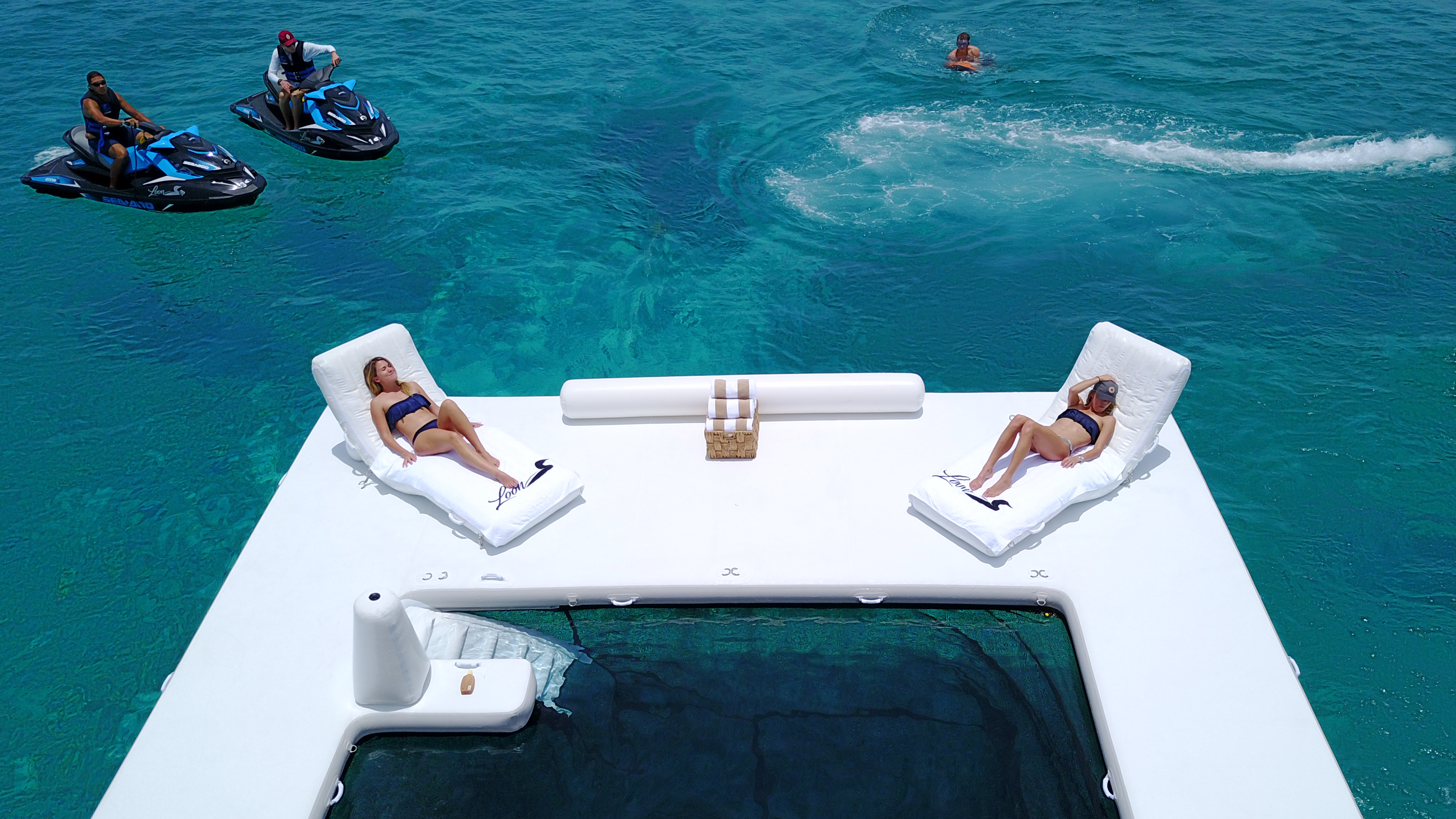 The sea pool gives more space to relax, while keeping close to the action

The extended deck area around the pool, specially requested for Loon by Captain Paul Clarke, is the perfect hub for water sports, and an excellent place for guests to relax close to the action.

“Everyone loves our pool!” says Captain Clarke, who worked with Texas-based yacht inflatables company FunAir on the custom pool design, after struggling to find a product elsewhere that fitted his needs. “We have multiple charter clients returning just because of it. Guests love the additional space it provides to lounge out on the ocean, and the safety of being able to jump straight into the netted pool.”

The photos of the FunAir pool have been credited with turning Loon’s social-media following into one of the highest of any charter yacht. FunAir has since been requested to design and build custom sea pools and inflatable toys for other charter yachts, including Latitude, Lady Z and Lady Azul, who charters in Asia. 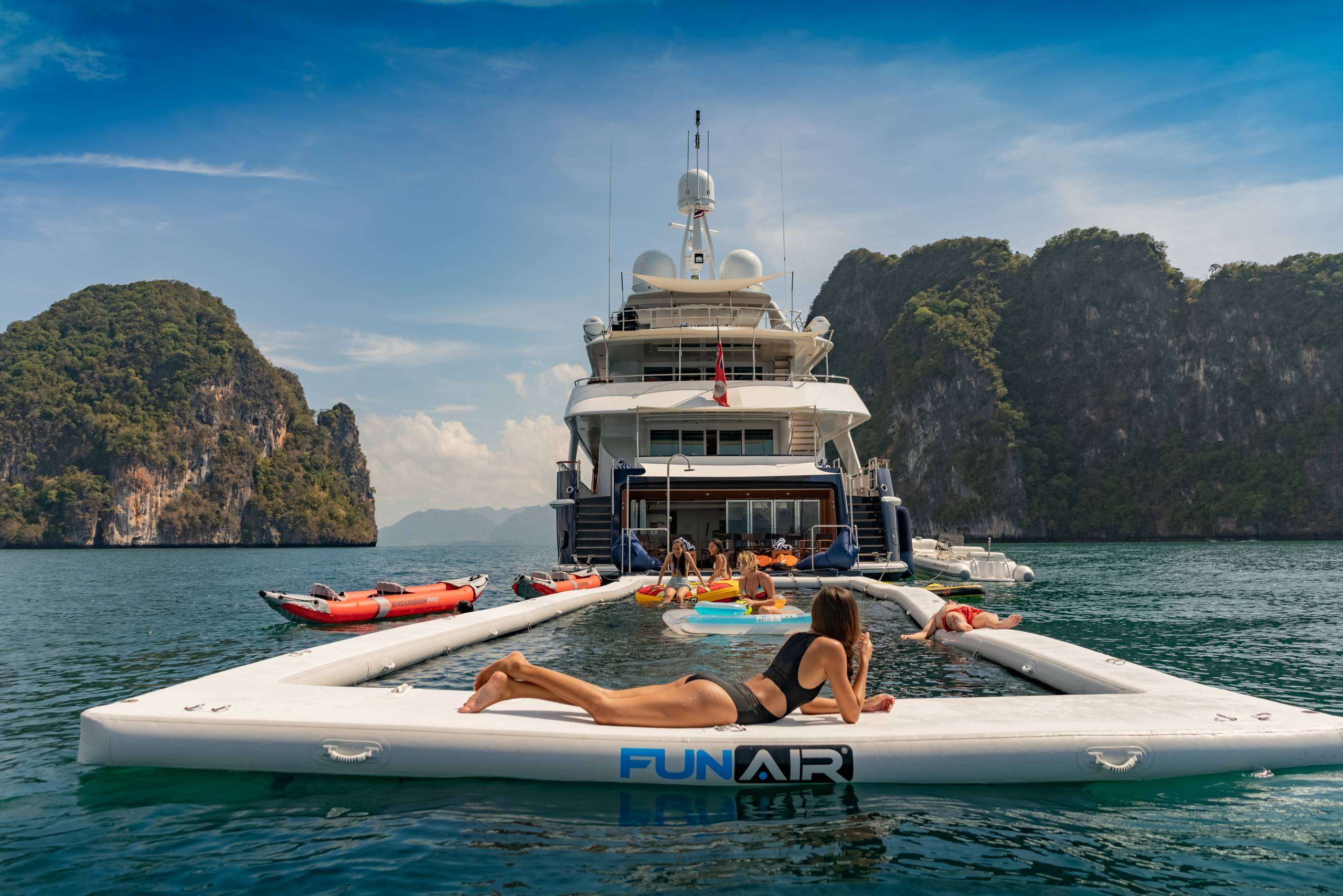 Lady Azul, who charters in Asia

While the beach club sea pool has become one of FunAir’s most popular products, the company is continually devising, testing and releasing new concepts designed to maximise the possibilities for fun onboard any yacht.

Celebrities including actress Reese Witherspoon and Despacito singer Luis Fonsi have posted photos of themselves enjoying the thrill of FunAir’s three-storey water slides, which can be suspended off the side of a yacht.

There are over 10 designs of water slide alone, including self-lifting slides and ‘The Flume’, which cuts off in mid-air to give the feeling of flying. The company also offers vertiginous climbing walls to ascend, floating islands to lounge upon, exhilarating water jousting games to play, jet ski docks and even yacht golf, complete with marine-friendly balls made from fish food. 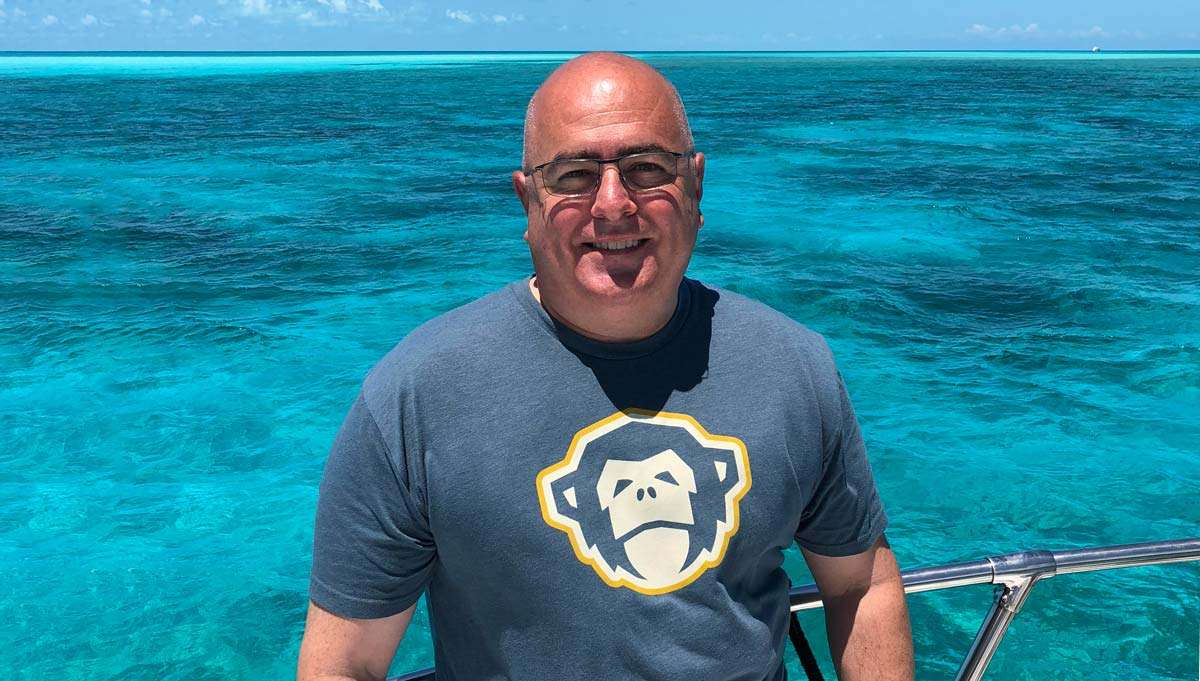 The company, which was founded in 2013, concentrates on custom orders, and the FunAir team works closely with yacht designers and owners at the start of new-build yacht projects.

“New builds are a large part of our business, and we have worked with many of the larger yachts launched in recent years,” explains FunAir’s managing director John Courtney, who has a background in technology and has been with the company for six years. “When I joined FunAir I felt it was important that I listened to the owners, captains, crew and guests first,” he continues. “It soon became clear that the owners and guests were tired of the same old toy selection, and the crew were tired of labour-intensive setups and poorly thought out storage placement. 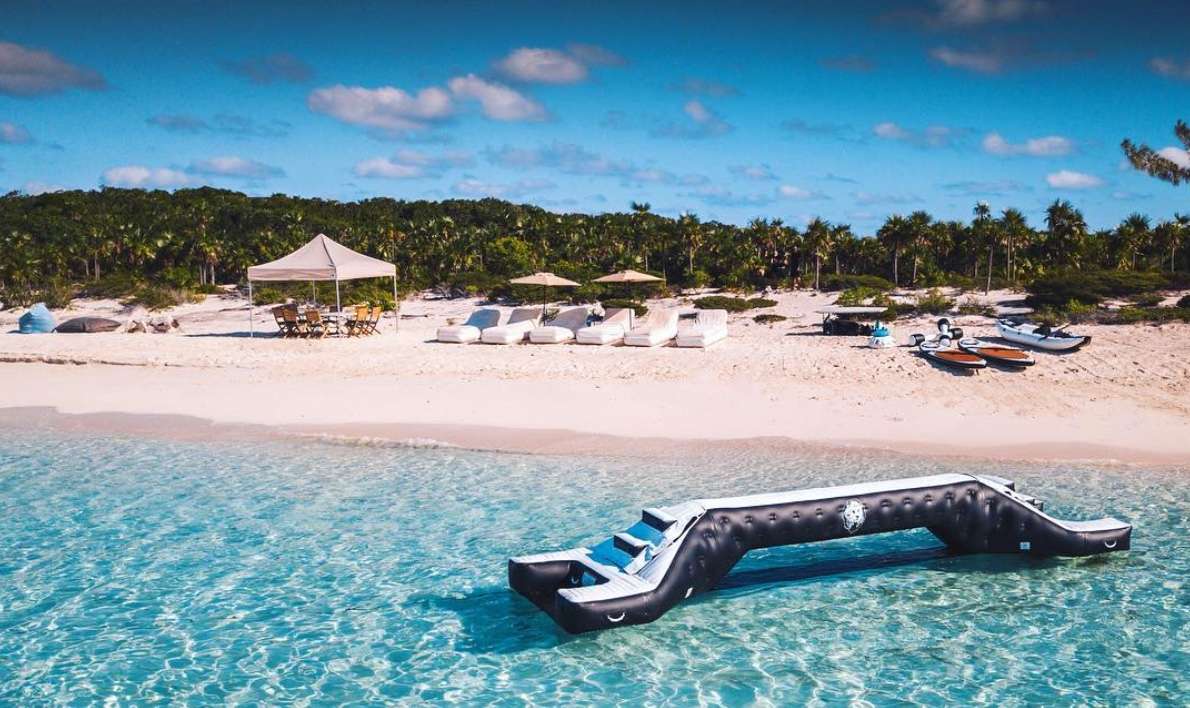 “We soon partnered with [consultancy company] Superyacht Tenders and Toys for a number of new-build projects, and together we promoted the benefits of considering the toys and tender selection at the start of the design process. Most of our orders are for a portfolio of custom-built inflatables that provide a range of fun activities for owners and guests.”

Courtney explains that working with owners and designers at the start of a new-build project allows clever, often secret storage to be built close to where the inflatables are deployed. This means crew do not have to carry larger items around the yacht, saving valuable time both for them and the guests on board.

With products that need to be lightweight but resilient, materials are an essential consideration. The FunAir team travels to material trade shows around the world and is constantly checking for new, more robust and lighter materials to work with.

“We’ve even participated in the development of some of them [materials],” says Courtney. “One of the first things we did was redesign how yacht slides were built. We sourced a new material that was super slippery, but extremely strong, and this meant we could remove the need for the usual cover sheet you find on most traditional yacht slides. Our slides are now much lighter, quicker and easier to deploy. The lack of cover sheet also means it is much simpler to clean and maintain because there are no hidden pockets or seams where water could collect.”

Other innovations that FunAir have put in place include purposefully offsetting seams and D-rings. This means that, when inflatables are packed, they fold tighter and smaller because the metalwork is not gathered in one place. The company’s patented ‘RapidFlate’ system can inflate up to six times faster than standard valves – meaning the time taken to inflate and deflate is measured in minutes, rather than hours.

“Crews love this because it greatly reduces deployment and pack-down times, allowing guests to have more fun and crew to get more rest time,” says Courtney. The company has also brought its ‘QuickShip’ range to the market in recent years, after noticing an increase of last-minute requests from captains and brokers who needed an inflatable to secure a charter booking.

“We now keep an inventory of 23 of our most popular products designed to fit most mid-sized yachts. Climbing walls, yacht slides, yacht golf and our range of luxury beach loungers and daybeds are very popular,” says Courtney. 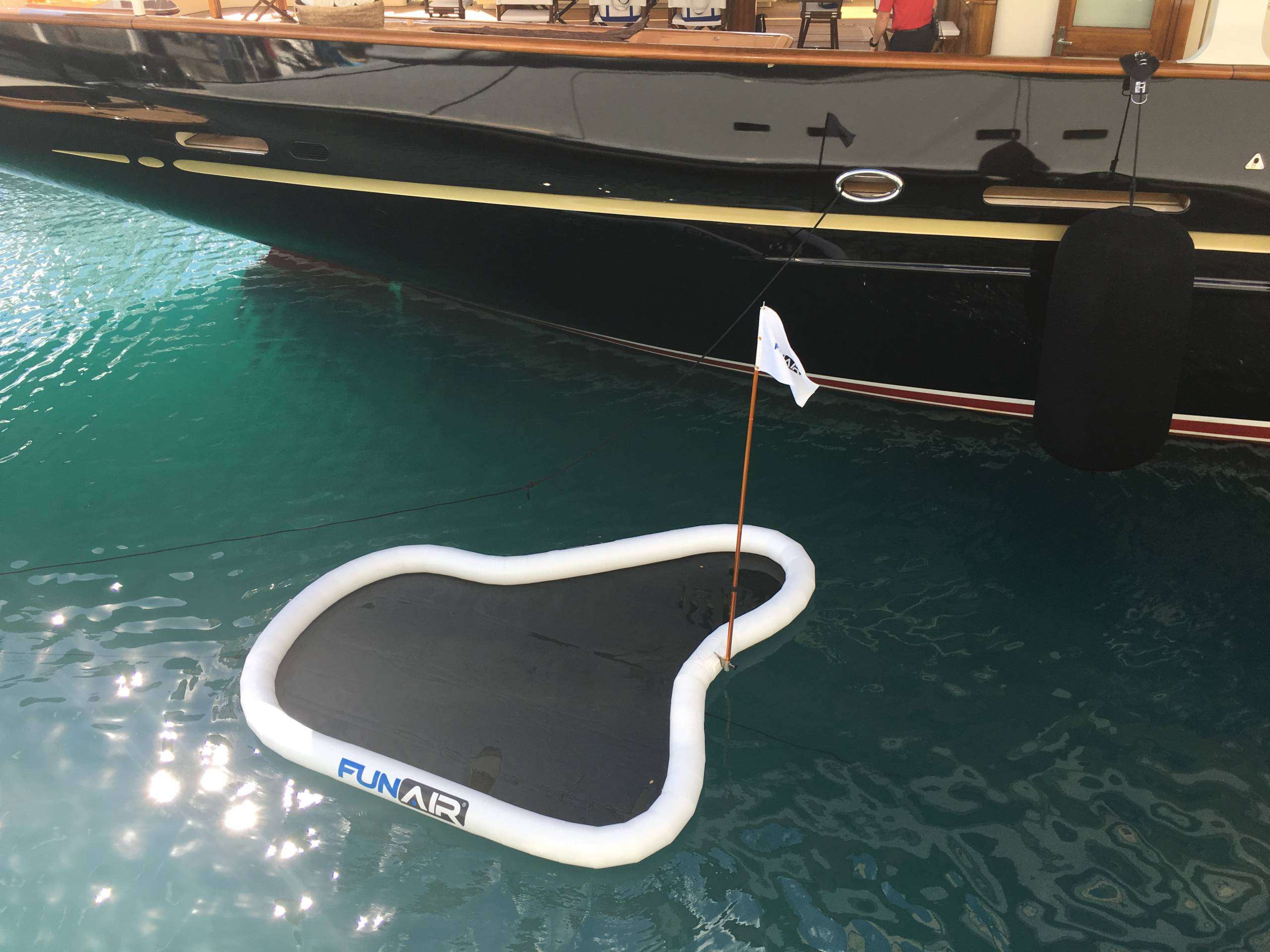 This version of golf comes with marine-safe golf balls

FunAir predicts that its biggest toy trend for 2021 will be the inflatable beach setup. “We are getting lots of  enquiries for all of our inflatable loungers and day beds,” Courtney says. “Yachts love being able to pack a full luxury beach setup into one or two tender rides to shore. Guests and owners love the additional comfort the inflatable loungers give, especially when paired with our custom covers, which can be embroidered with the yacht’s logo or a design of their choice. We are in the final design stages for an inflatable beach chair to add to this range, which will be launched in 2021.” 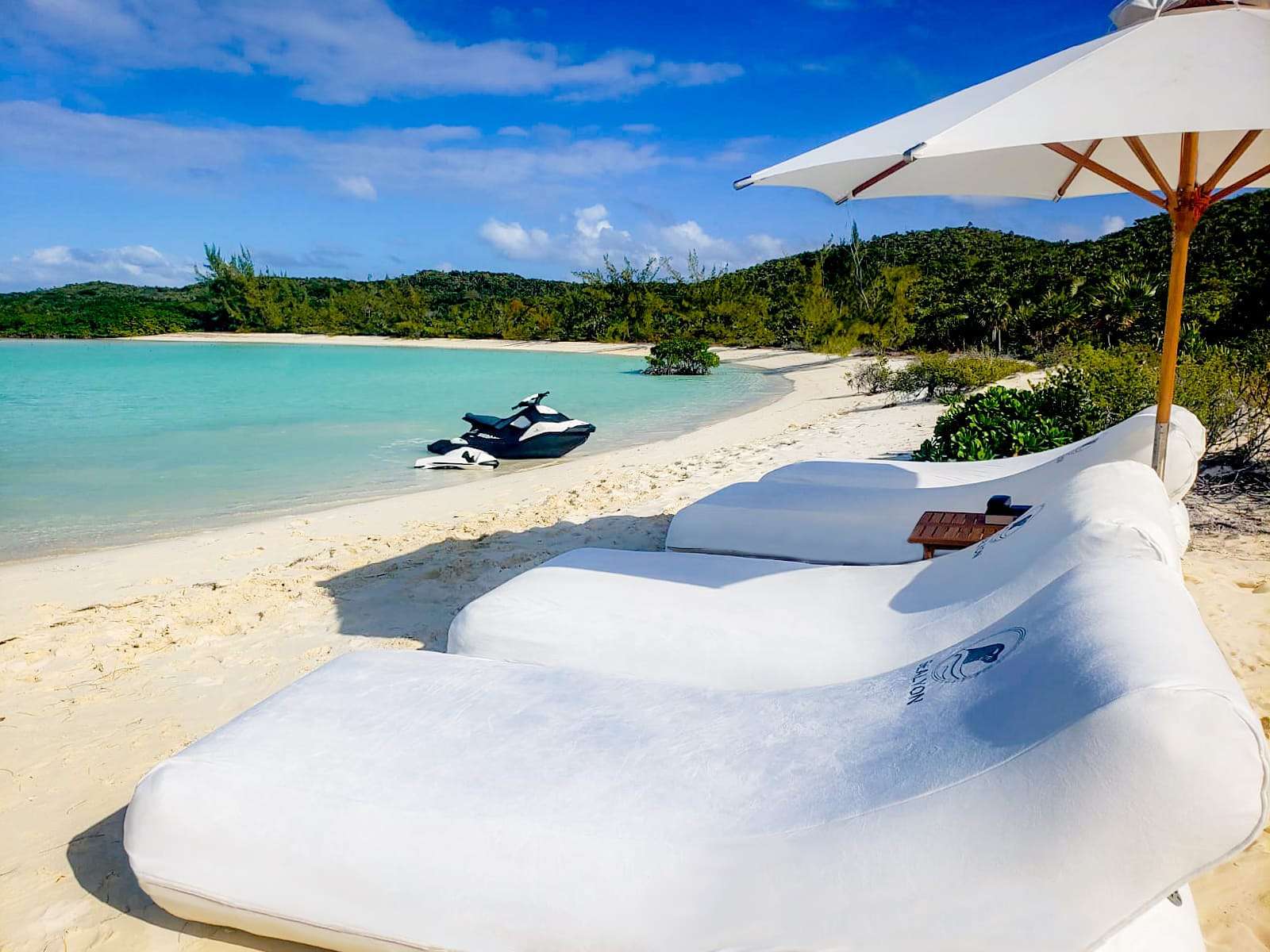 Courtney tells Asia-Pacific Boating that FunAir regards Asia-Pacific as a rapidly growing sector of the superyacht market. “Not only are we seeing more boats travelling to that region but also more based there permanently,” he says. “MY Lady Azul is a favourite of ours. She recently added an extra-large sea pool to her portfolio and charters in Asia. They often visit areas that have only recently opened up to yachting, like Myanmar or the Mergui Archipelago, which are stunning locations that retain their natural beauty.” 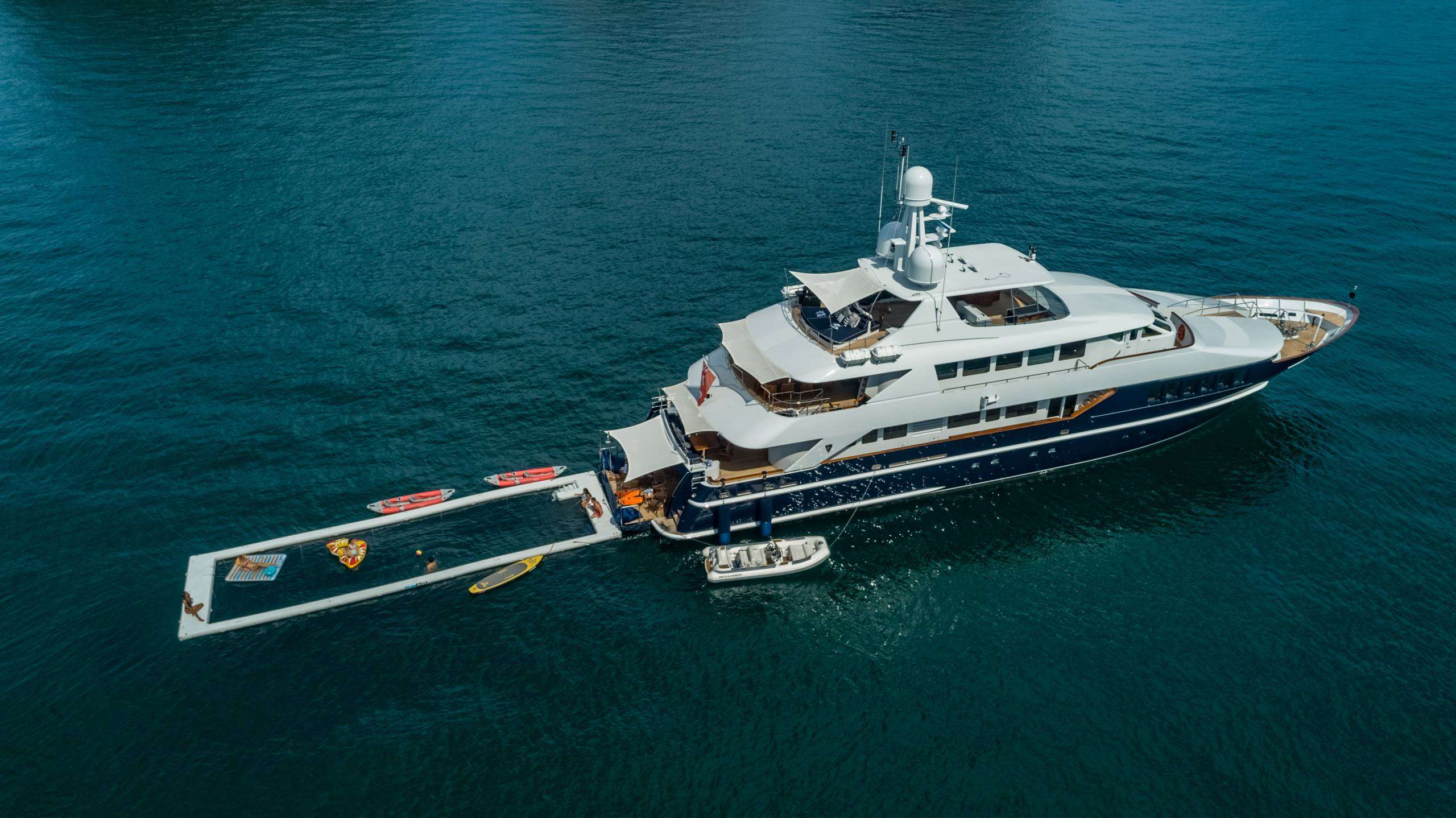 Advances in materials are making giant inflatables more practical and less unwieldy than they once were, thereby ensuring they become more popular with crew and owners. This, coupled with a growing awareness of FunAir’s custom capabilities through smart social media strategy, are a recipe for the company’s continued success.

(Courtney confirms FunAir has recently expanded its US team and is launching an ambassador programme soon.) As the company itself puts it so succinctly: “The only limitation is your imagination, and a nod to the laws of physics.”