Benefitting from the “First” legacy of 40 years at sea, the eagerly awaited First Yacht 53 from Beneteau will make her preliminary series of tacks early this autumn. The First Yacht 53 is a high-end sailing yacht marrying luxury and performance, making her comfortable and easy to move around. Two stars aligned for her creation: Roberto Biscontini of America’s Cup fame for the hull design and Lorenzo Argento for the interior and exterior design. The First Yacht 53 boasts strong features designed for sailing purists, with high expectations of excitement at the helm and life at sea. 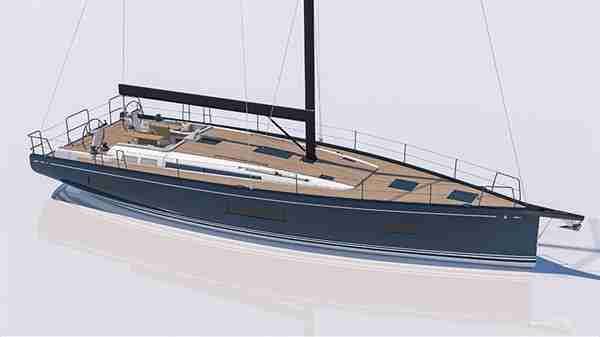 A hull and sail plan quick to clock up miles

Featuring a full plumb bow and a maximum beam further aft, the twin rudders give the perfect feed-back to control this highly responsive hull. The 2.5m or 3m draught (with lead bulb), as well as an optional carbon mast, gives the First Yacht 53 the competitive advantage to clock up miles quickly. “I have always looked for performance on the boats that I sail and build. The First Yacht 53 is a lot like me!” said Robert Biscontini in good humour, in light of his incredible experience in the America’s Cup.

To achieve maximum thrills at the helm, Beneteau focused on balancing weight and balance under sail when designing the boat. The company worked to optimise the position of the centre of buoyancy in relation to the centre of effort, guaranteeing a lively yacht under sail, responding quickly to the helm. The best outfitters were sought to provide their top performing products: North Sails for the sails, Harken for the deck gear, Lorima for the mast and Lemer for the keel. They were all involved on the recent design of the Figaro Beneteau 3 with foils. 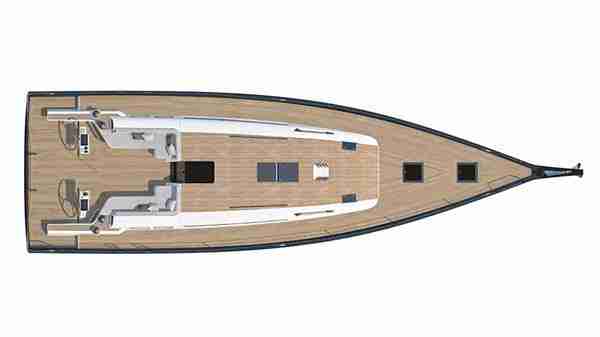 Deck circulation, from the helm station to the foredeck, has been improved considerably on the First Yacht 53, by Lorenzo Argento, one of the “founders of modern yachting”. The Italian designer succeeded in taking ease of movement one step further. “There is no need to step over anything or to obstruct a crew member. Everything flows, with the cockpit divided into two distinct sections: the helm and maneuver, and a relaxation area. There is just one watchword for this First Yacht 53: ‘intuitive’”, stresses Lorenzo Argento, who is a sailor himself.

Winches nearby the steering stations can easily be operated by crew members wishing to trim the sails. Movement is wonderfully safe on this flush deck fitted with handrails and coamings. All these details make the First Yacht 53 a seaworthy boat at ease on the high seas and comfortable on a mooring. Once the anchor is cast, two people can easily take out the 2.4m (8ft) tender stored longitudinally in a tender garage. 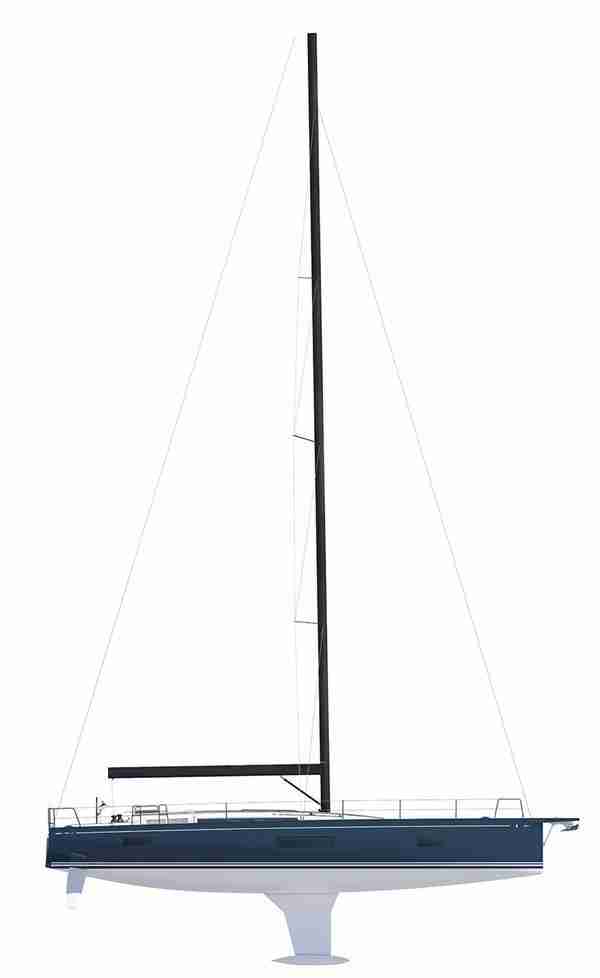 The hull is built using the infusion process for optimal control of the boat’s weight and for its excellent mechanical properties. The hull structural inner hull liner is infused, then bonded and laminated in areas subject to high stress, such as the chainplates and the keel. In addition to this technique, which has been mastered by Beneteau for many years, it makes use of a concept mainly used on superyachts up until now – an aluminium sole to which interior fittings are fixed. The overall structure, and the lowering and centering of weight have been considerably optimised to improve stiffness and performance.

“On a beautiful yacht such as this, few owners dine inside. Many of them prefer to lunch outside in the cockpit instead of sitting around a large saloon table indoors. We have changed the layout to meet their expectations, giving it a smaller table and relaxation area with a large sofa and an coffee table. I really love this sofa as I spent a lot of time working on it!“ says Lorenzo Argento.

Beneteau completely revisited the layout of the saloon to provide a like-at-home atmosphere with two spaces: a galley and dining table to port, with a relaxation area and sofa to starboard. The modern interior décor is timeless and chic with white lacquered bulkheads together with moulded woodwork and teak floors, yet remains practical at sea with numerous fiddles and handrails. The interior of the First Yacht 53 comes with three cabins and two heads, including a forward owner cabin. The other option is a layout with three cabins and three heads and a skipper’s cabin are also on offer. She is bright and well-ventilated, with a gently sloping companionway for good communication between the interior and exterior spaces and her service area is easy to access. In all, she is an ocean-going combination of good looks and practicality. 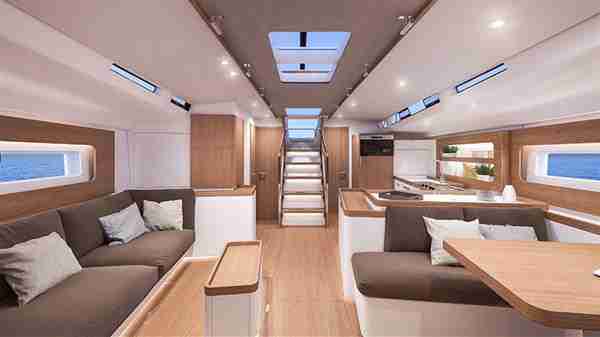 After two years of development, the First Yacht 53 will be shown for the first time at the autumn boat shows in Europe (Cannes, Genoa, Barcelona) and America (Annapolis). This new high-end First meets the expectations of the most demanding sailors.