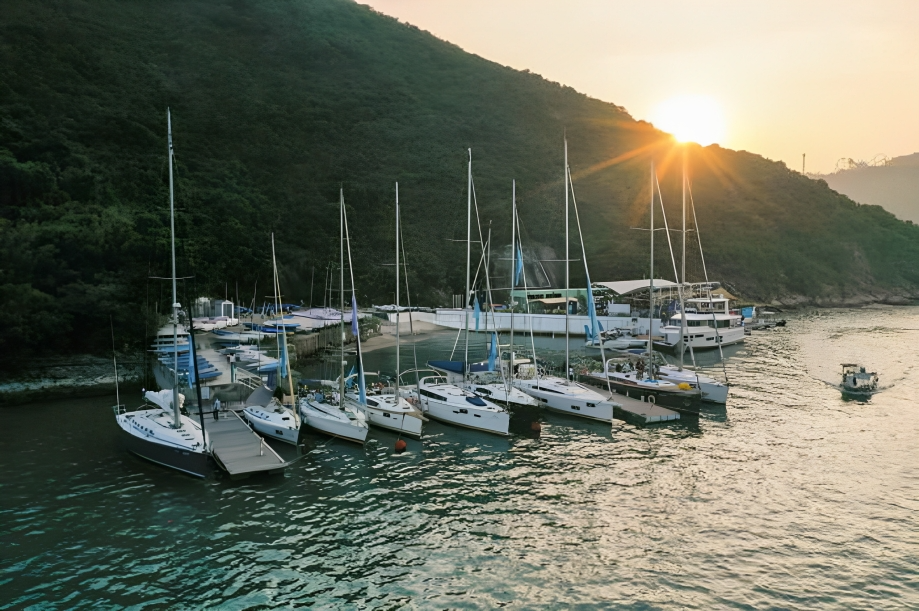 The second edition of the Beneteau Cup Hong Kong, which took place from 29-30 October 2022, has been hailed as a ‘tremendous success’, with 17 yachts in attendance.

Building on the inaugural edition in 2021, this year’s event was expanded to include a packed social calendar to complement the on-water racing.

The two-day event was organised by Simpson Marine in conjunction with Beneteau Asia-Pacific, with the support of Aberdeen Boat Club (ABC) and Aon.

The event’s programme included island racing on the first day, a gala dinner with the theme of Pirates of the Caribbean, a pursuit race on the second day, and a grand prizegiving and farewell sunset party in The Bay Restaurant in Mo Tat Wan on Lamma Island. 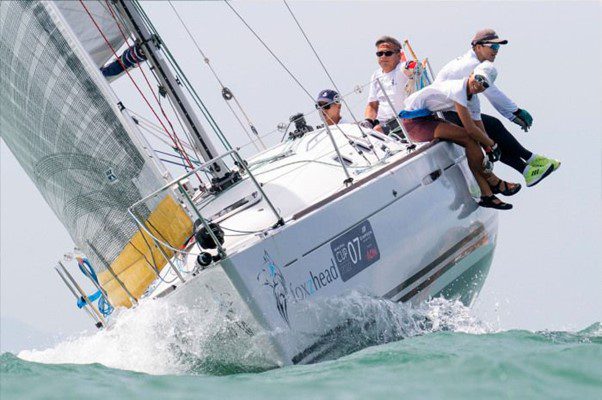 As Asia’s biggest Beneteau event, the Beneteau Cup Hong Kong is billed as an annual event that aims to build a sense of community among Beneteau owners in Hong Kong and beyond. The intention is to grow the event into an international regatta with owners from China, Taiwan and South-East Asia attending as well.

“It was a delight to take part in the Beneteau Cup last weekend. It not only brought together a number of our Beneteau owners from around Hong Kong but was also a great chance for many of the Simpson team to get out on the water and join the fun,” says Richard Allen, group general manager at Simpson Marine. “Congratulations to the winners and a big thank you to Beneteau, Aon and all our other sponsors for making the event such a tremendous success. The Beneteau Cup is firmly on the yachting calendar and I even heard a number of comments from other sailors already asking about buying a Beneteau so they can join next year’s event and take part in the best sailing event in Hong Kong.”

The line-up of 17 yachts reflected Beneteau’s fleet of sailing yacht models. Yachts in attendance ranged from a Beneteau First 265 White Rabbit all the way up to Oceanis 51.1 Legende II. The event was raced in two divisions – HKPN A and B – with a ratio of 60:40 of local Hong Kong crews, which is a significant indication of the fast-rising popularity of sailing among local crews. 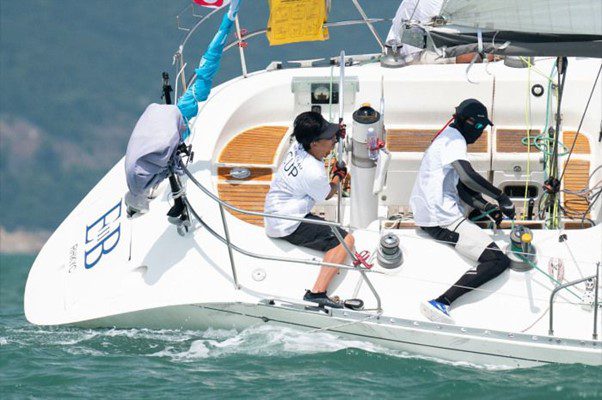 The Middle Island ABC club was fully set up for a Halloween banquet party with a “Pirates of the Caribbean” theme. Guests were greeted by Chris Pooly, Aberdeen Boat Club Commodore; Richard Allen, Simpson Marine general manager, and Erwan Her, Beneteau Asia-Pacific sales director before the highlight of the evening, the day one awards ceremony.

“It was an honour and a privilege, but also a pure delight for ABC to be selected by Beneteau to host the second Beneteau Cup Hong Kong event over the Halloween weekend,” says Pooly. “It was a hugely enjoyable occasion for all who participated in and assisted with the two regatta races – helped by the fine weather and followed by a superb French-themed buffet on Saturday and the fun Sunday Beach Party. All redolent of the fun to be had for anyone investing in a Beneteau yacht. The ABC management and staff are proud of the association with Beneteau and thank them greatly for their confidence in us.” 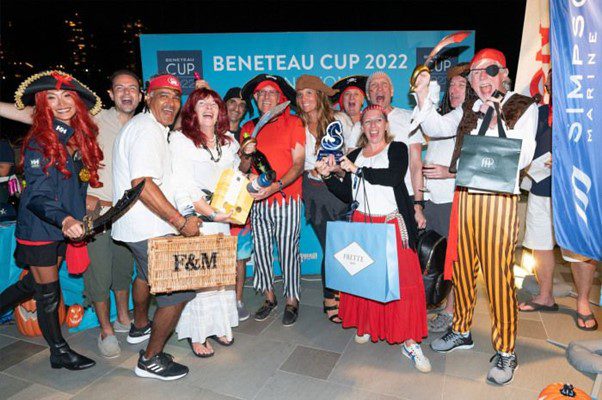 Sailability, the official charity of the Beneteau Cup Hong Kong 2022, and was represented by Kay Rawbone, co-founder and CEO.

Day two started off with great winds of 10 knots and a pursuit race. Start times were set according to each team’s HKPN rating, ranging from 10am to 11:42am, with Course 2 selected for that day by the ABC Race Officer. Course 2 started on the Round Island start line running through Chesterman Gate, Castle Rock to a Tam mark, then a long upwind leg to TCS2 and then back under spinnakers to Castle Rock and onto the Chesterman Gate and finishing at Round Island (18.7nm total). The wind dropped off near the finish making it challenging for a number of crews to cross the line but nearly all the fleet finished within the time limit.

After the teams finished racing the yachts motored through the East Lamma Channel to Mo Tat Wan, Lamma, where a sunset finale party was held in The Bay restaurant and on the beach. 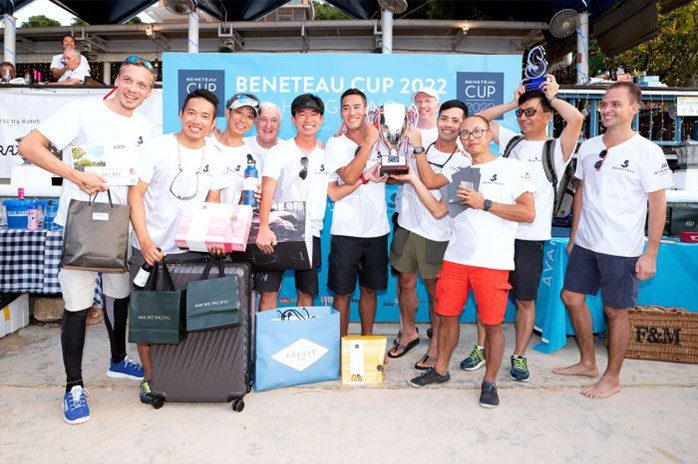 After some much-needed rest and relaxation, the crews were ready to find out the results of day two and the overall winners of the event.

Day two awards went to Easy Breezy II, a First 41s5 helmed by Alfred Lau and Castor Kong, Coral Harbour, an Oceanis 40 of Ming Lou, Arete, a Sense 46 of Jack Lynch, and La Folia, an Oceanis 35.1 skippered by May Lau.

The overall prize for the Beneteau Cup Hong Kong 2022 was awarded to Easy Breezy II. They were closely followed by Ichiban (2nd), Coral Harbour (3rd) and Foxzhead (4th). 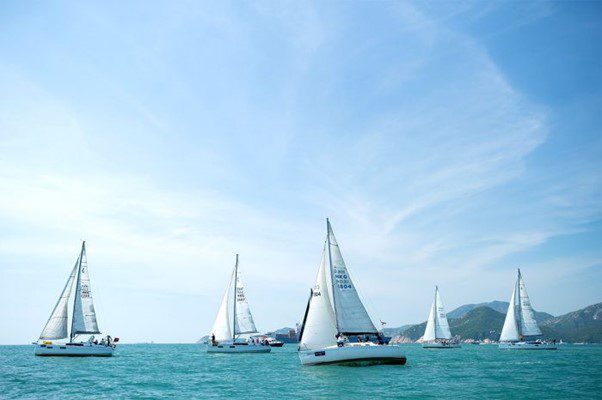 “As a new team founded only this summer, we are thrilled to have won our first trophy!” says Alfred Lau and Castor Kong of overall winner Easy Breezy II. “We were overwhelmed after winning the HKPN B division by corrected time on Day 1 unexpectedly. The event offered exciting racing, especially the downwind pursuit start on Day 2. Several ropes parted in the strong breeze, and we thought it was the end of our chances. But our committed and hardworking team stayed focused and maintained good balance and momentum, avoiding holes near Beaufort Island and Cape D’Aguilar until we caught up all but Arete by the upwind mark TCS2.

“Picking the course through the downwind Lo Chau Mun was tricky as our A-sail is relatively small but we still had difficulty gybing it throughout a dead run channel, and the lead changed more than once. We kept it on longer than others, well into the reaching leg after Castle Rock; whether it sped us up or slowed us down we still do not know. And then, within a nautical mile of the finish line, the wind dropped and somehow all three leaders missed the lay line, and it became a tacking game on BF2. Thanks to smaller displacement and obsessive adjustments – at one point a crew or two leaned out to leeward holding just the shrouds – we took the gun. The sailing was topped off by fantastic hospitality on both days, and we enjoyed winding down over the free flow of champagne and music and, more importantly, sharing moments with other sailors. It was a great privilege to sail with a great team on an amazing boat. We will surely be back to defend the title next year.”