On June 6, the Azimut S6 arrived in Times Square, completing the New York celebrations organised by Azimut|Benetti to celebrate the Group’s 50th anniversary. This initiative was in partnership with Design Pavilion and NYCxDesign, demonstrating the Group’s commitment to promoting interaction between art, yachting and design.

The installation of this 18-metre motoryacht brings to a close a month of initiatives linked to this anniversary, including public and private events, cruises on the Hudson river, cocktails on Chelsea Pier, debates and talk shows. 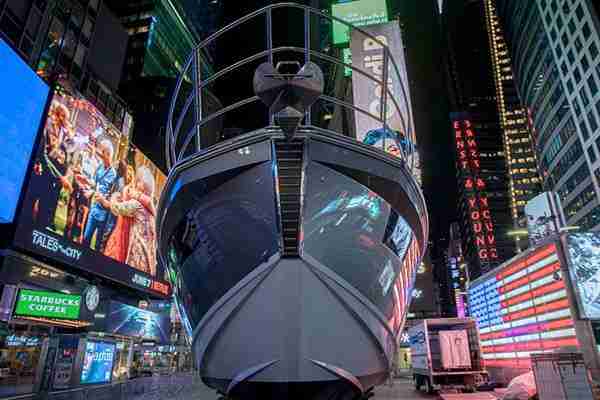 This is the first time in the history of one of the world’s most famous city squares that such a big yacht (the biggest that the square was able to host) has been exhibited and transformed as part of a creative installation. This was made possible through the partnership with Design Pavilion and NYCxDESIGN, the annual event at which New York celebrates design. The partnership between Azimut|Benetti Group and Design Pavilion confirms the company’s desire to continue to surprise and innovate the yachting sector, with initiatives that illustrate the cornerstones of the company culture: refined universal design, constant evolution and ongoing technological research.

The installation (preceded last year by the Azimut S7 installation outside the Triennale di Milano during Milan Design Week, also produced by FeelRouge Worldwide Show) is part of a cultural operation designed to shine a light on the DNA of the Azimut brand, which has brought unexpected elements to yachting from the beginning. 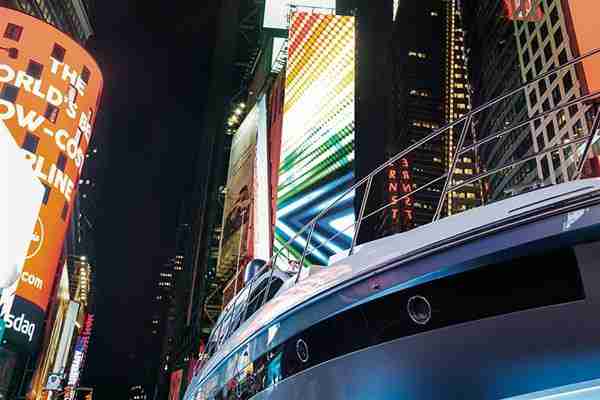 A 60-feet boat taken out of its natural element of the sea and placed in an iconic city square densely populated with neon lights changes our perception of the usual and the possible. For Azimut, being at the center of what New Yorkers call “The Crossroads of the World” means being at the symbolic center of the contemporary world, at the nerve centre of a network, a representation of global contaminations…

This spectacular urban show is designed to create a dialogue with the city, in which the yacht reflects the hypnotic and kaleidoscopic neon lights, in a new form of design that is consistent with the powerful choices and new codes established by Azimut Yachts over the glorious past 50 years. 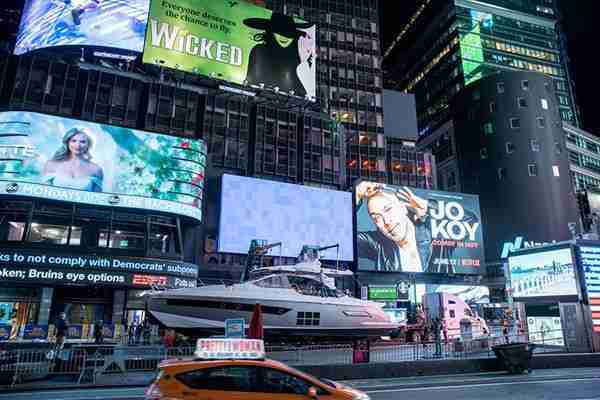 The initiatives connected with the S6’s appearance in Times Square until June 11 also include public engagement activities, the first of which is addressed to new generations in partnership with One Ocean Foundation, the organiser of projects to protect the marine environment. The second, on the other hand, promotes an international competition for design students entitled Can You See/Sea The Future, organised by Azimut Yachts in collaboration with Arts Thread.

In the days following the gala evening, Azimut|Benetti’s top management played a leading role at two important initiatives. At the Nasdaq Impact Summit, which provides a forum for sustainability initiatives, an entire session was devoted to the protection of the oceans, that featured other key players including Volvo Penta, Paola Lenti, Seakeeper and One Ocean Foundation. And on May 14, a panel discussion was organised on the role of art and design in contemporary lifestyle, moderated by New York Magazine design editor Wendy Goodman and chaired by Group Vice Chair Giovanna Vitelli. 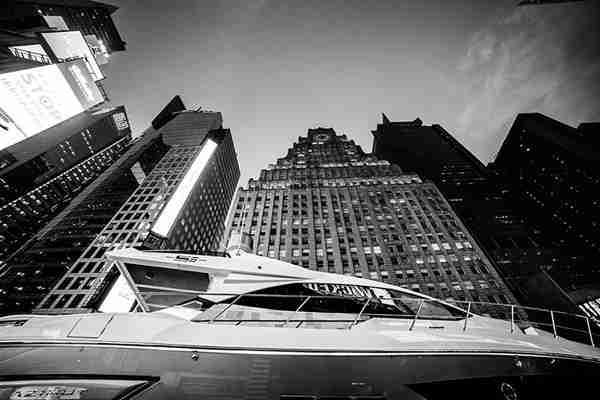 The Group has established highly successful partnerships with the world’s finest designers in both the yachting segment and beyond, convinced that innovative input can be provided by other areas of endeavour. The famous names brought in from the luxury residential and artistic sector include Elle Decor US’s A-Listed member Achille Salvagni, who took part in the panel discussion; Vincenzo De Cotiis, whose work includes both architectural projects and art installations and who is represented in New York by the Carpenters Workshop Gallery; the New York-based European duo Enrico Bonetti/Dominic Kozerski, currently in charge of the new Pace Gallery project in New York, who were also on the panel; Carpenter’s Workshop Gallery Director Ashlee Harrison; and Jennifer Olshin, Partner at the Friedman Benda collectables gallery.

Azimut Yachts’ jointly-held design competition with Arts Thread, the digital platform that acts as a meeting point between artists and designers, also offers young talents the possibility of future employment. The winner will be announced before the end of the year. This is the most recent chapter in the long-standing partnership between the Group and various schools of design and universities, including IED, Polimi, Coventry University and Politecnico di Torino, with the aim of identifying the latest trends and propositions in yacht design. Azimut|Benetti Group partnered with One Ocean Foundation, the non-profit association committed to protecting the marine environment by promoting a sustainable “Blue Economy”, a better understanding of the situation in the oceans, and programmes for the new generations.

Five international events have been planned for the Group’s 50th anniversary, each representing a decade of Azimut Yachts’ activities, starting from 1969, the year the company was founded by Paolo Vitelli. Dubai, New York, Cannes and Hong Kong are the locations involved, with a grand finale event to be held at the company’s Avigliana headquarters in December.