When Dr Andrea Marshall was considering a thesis for her PhD, she found that very little was known about manta rays. What followed was a 20-year love affair with the ocean’s most curious creature, which took her to the shores of Mozambique 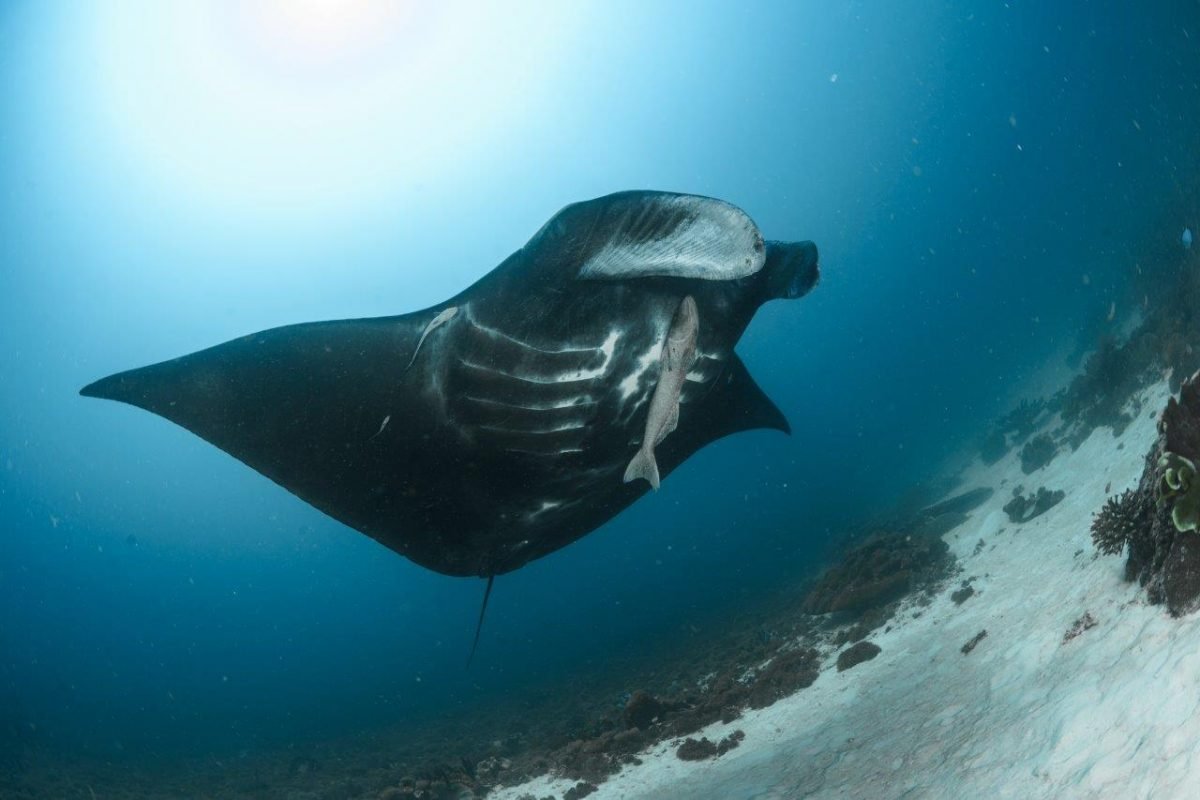 “I’ve always admired the free spirit of people like [renown primatologists] Jane Goodall and Dian Fossey – I wanted to go out in the wild and study something my way and not what the professor told me.”

So says Dr Andrea Marshall, marine biologist, co-founder of Marine Megafauna Foundation and one of the world’s first specialists in manta rays. Her work on manta rays has inspired her sobriquet Queen of the Mantas, which Marshall says was given to her by the producers of BBC’s Natural World wildlife series, who did a short documentary on her in 2009. Marshall says she was embarrassed by the nickname at first, but has since embraced it, as she has embraced the rays themselves.

Marshall grew up in California wanting to be a marine biologist since she was five years old, obsessed with the ocean and sharks. She became a certified scuba diver at the age of 12.

Marshall initially wanted to study sharks. However, while volunteering at the International Union for Conservation of Nature shark specialist group, she found so many researchers taking part that she decided to switch focus to the enigmatic manta ray, which are closely related to sharks but had barely been studied in a formal way.

“All the information came from dribs and drabs, notes and anecdotes. There was nothing formal, and it was really difficult to do the assessments. I thought how strange that was – everyone loves manta rays. I always loved them as a diver, but I never really considered studying them. It was difficult – no one could figure out where or how to study them.”

So Marshall switched her focus for good, later discovering a huge population living in the coastal waters of Mozambique, East Africa, in the Indian Ocean. She first worked there after it started opening after a decades-long civil war. “It was such beautiful country, and it has so much to offer science … I thought this is my big break,” she recalls, “to do something unique and important. So, I built a little hut and did my PhD along this coastline.”

Ultimately, Marshall settled in Mozambique, feeling that the established way of conservation work and research had become too restrictive. Marshall also found that because manta rays have barely been studied, there was plenty of scope for her to do original research: “They are incredibly charismatic, beautiful and amazing. But it was the need to study them; they hadn’t been studied before, and there was an air of mystery over them. Everything I learned about them would be new.”

Marshall went on to earn what she says is the world’s first PhD in manta rays. There was a lot of work to be done just answering the basic questions that drive conservation efforts: how long they live, how often they mate and reproduce, how many offspring they have, where they live, population numbers and so on. 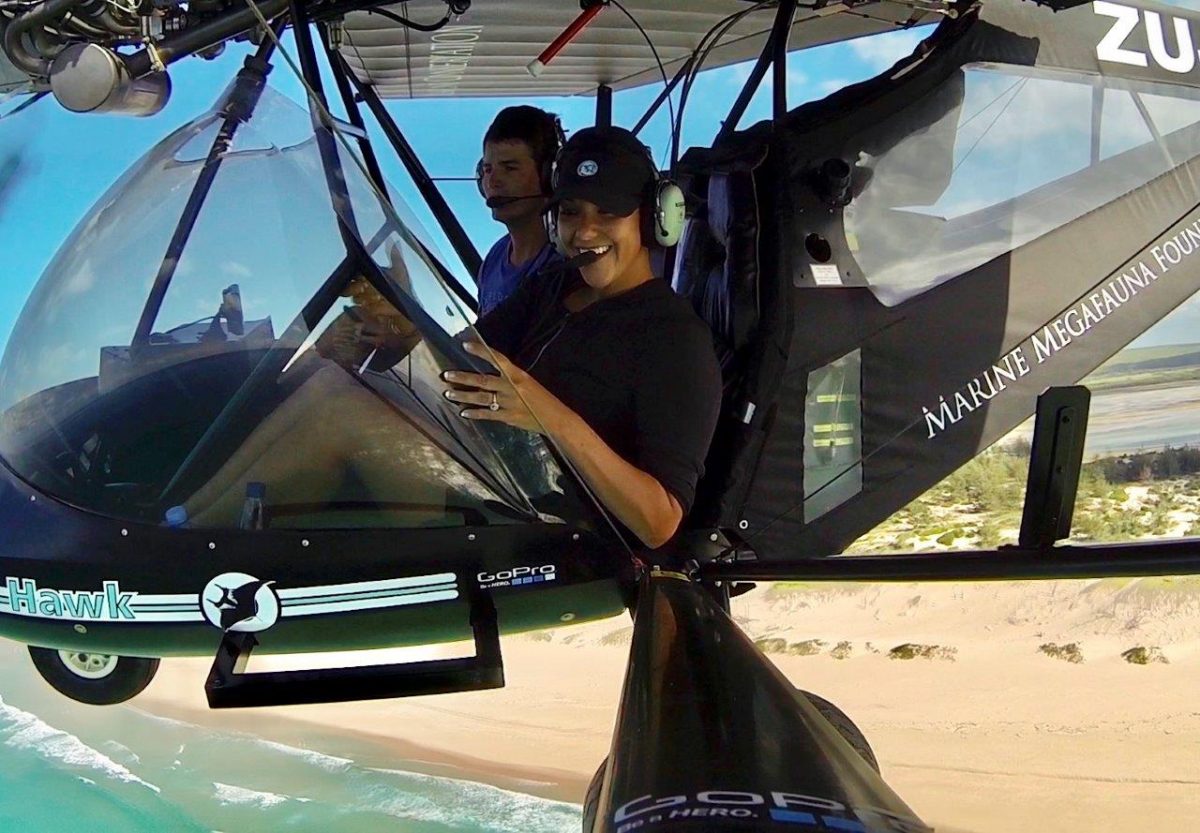 Taking a look at a Manta Ray habitat from the air

She discovered that there were two distinct species of this ray in Mozambique. It took another seven years to prove it with the data, which she announced in 2008. “It was a big thing for a 20-year-old working out of Africa,” Marshall says. “In the conservation world, it was a landmark discovery.”

“I thought this is my big break, to do something unique and important. So, I built a little hut and did my PhD along this coastline” – Dr Andrea Marshall

Marshall later co-founded the Marine Megafauna Foundation in Mozambique to carry on her work. “I knew all the animals [mantas] by name, and I wanted to spearhead conservation efforts here because I could see there were a lot of threats.”

Her co-founder at MMF, Dr Simon Pierce, is focused on whale sharks. MMF now works in other nations on conservation, with studies underway in Indonesia and Florida – and Mozambique, of course. The goal of MMF is to use research to support conservation efforts, such as getting creatures on endangered wildlife lists and pinpointing habitats to support the creation of marine protected areas.

Marshall and her team have made some incredible findings about manta rays. Some stick close to reefs and the shore, and there are oceanic rays that are more transient. Marshall says that Mozambique and Indonesia are the only places where both types of manta ray intermingle.

“The reef mantas are friendly faces, and we see them quite regularly,” Marshall says. Despite their size, manta rays are harmless to humans. Most bear scars from encounters with sharks, and the Mozambique coast has a lot of sharks. 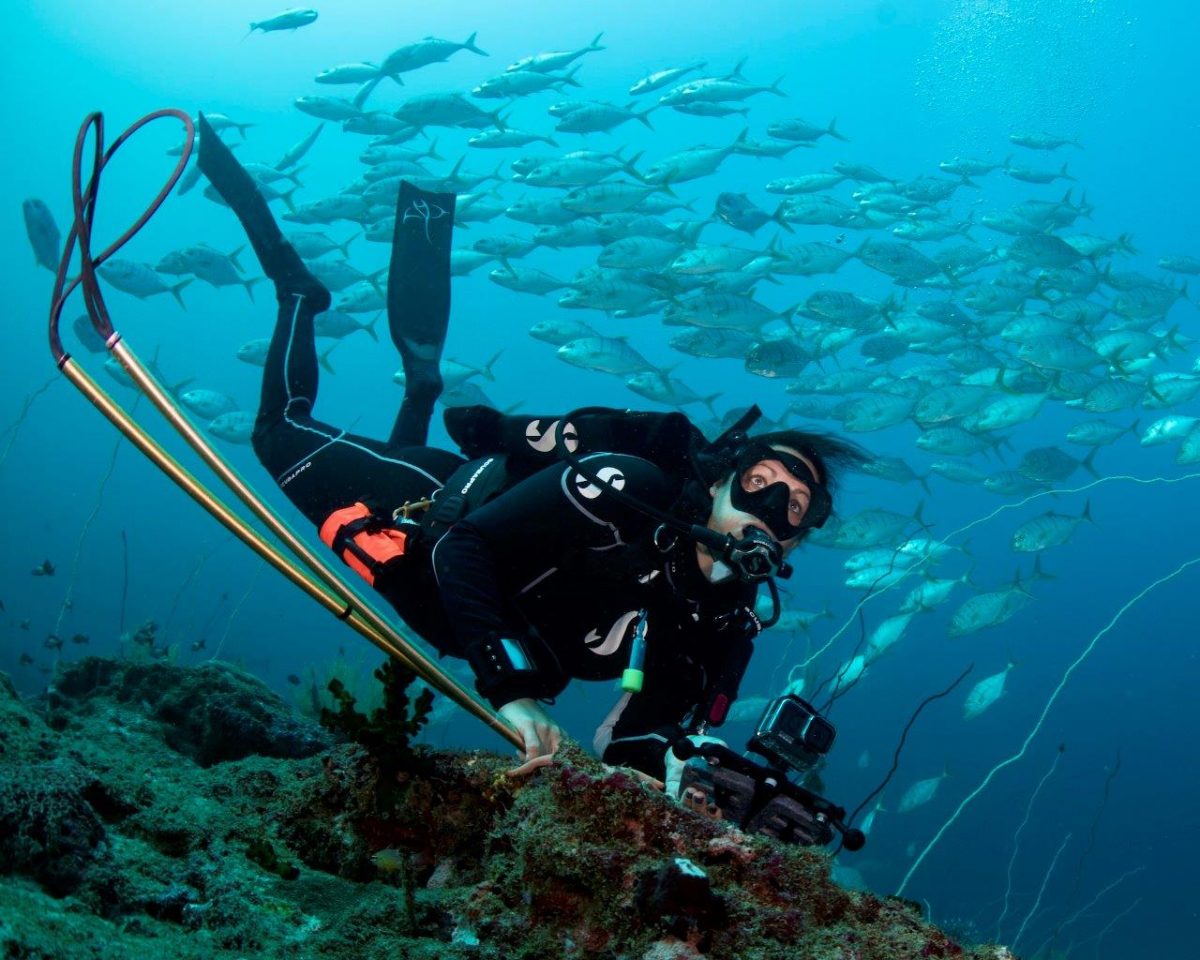 “They [manta rays] are strong, they are battlers, they go through a lot to live here,” says Marshall, adding that the creatures are very curious and friendly despite the dangers they face. “The more people learn about them, the more they will have respect for the marine world and how fantastic it is.”

Satellite tags revealed that manta rays could travel 1,000 kilometres or more in just two weeks and that they could dive up to a kilometre beneath the surface. “I was blown away at how athletic they are, how they penetrated the high seas. I had no idea they were as hardcore as they turned out to be.”

Marshall says that her original fascination with sharks and their evolutionary design has been replaced by manta rays. “Everything about how they are designed – their hydrodynamics, how fast they can travel, their burst speed, the depths they can dive, the migrations they can take, the way they have evolved their mouth to feed on plankton – is like poetry.” 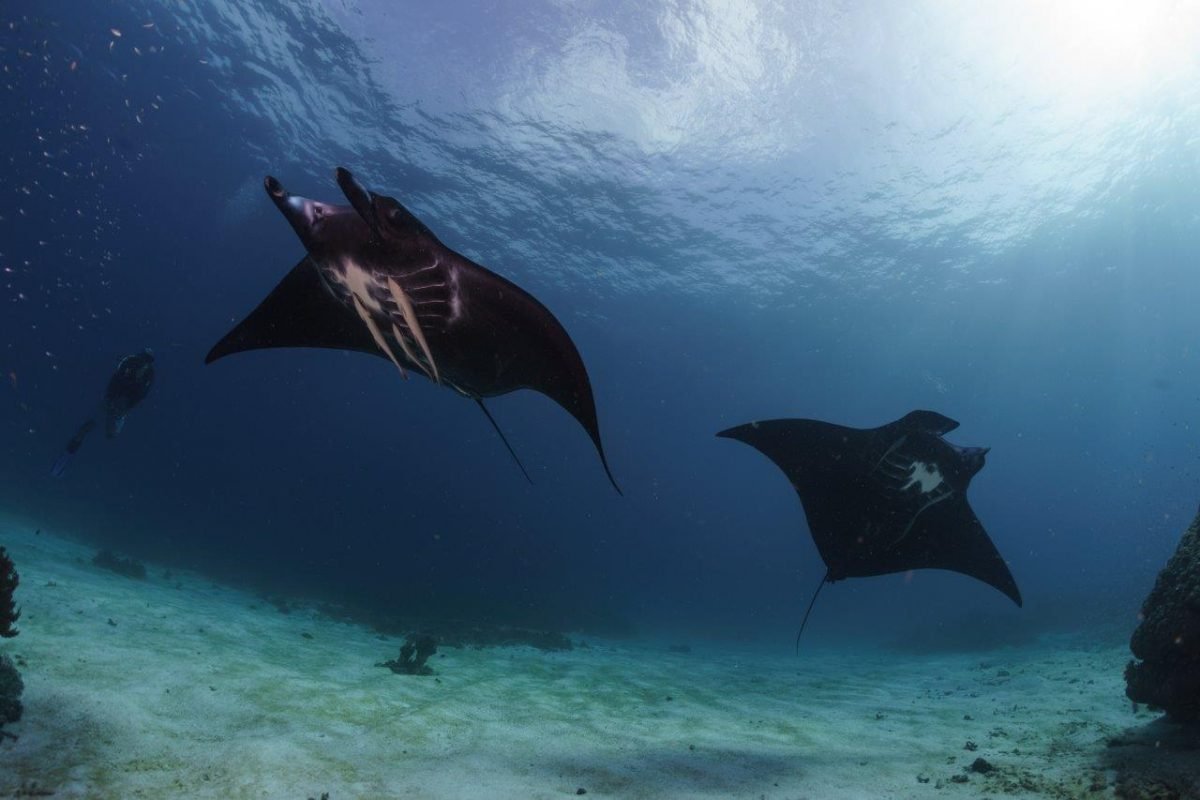 Having gathered data on the physical nature of manta rays, Marshall says she is working more on discovering their social nature. Manta rays are very sociable creatures, living in distinct groups and showing themselves to be complex, intelligent creatures.

Despite their size, manta rays are harmless to humans. Most bear scars from encounters with sharks, and the Mozambique coast has a lot of sharks

Manta rays in captivity have passed the so-called ‘mirror reflection’ test, whereby they recognise the image seen in a mirror as their own reflection. They possess the largest brain of all fish species. They are also shown to have elaborate ‘mental maps’ of important habitats.

Despite the fascination with these rays, Marshall and the MMF still have a lot of work to do answering basic questions about manta-ray populations, to help protect them. The proactive conservation of manta rays is currently poor. 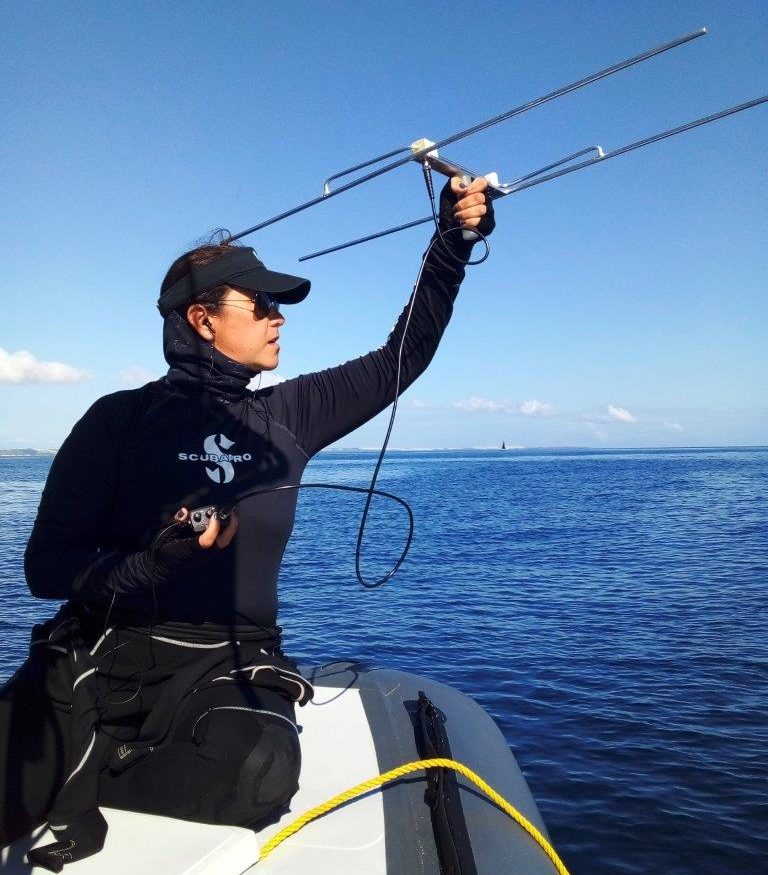 The proactive conservation of manta rays is currently poor

After 20 years of living in Mozambique, where Marshall is now married and raising a daughter, she has become determined to protect her magical mantas of Mozambique. She says that in some places, populations of reef manta rays have declined by 90 per cent or more. In part, the decline is due to local fishermen using modern fishing nets that kill larger numbers of ocean creatures than traditional ones did. Manta rays are now caught for their filtering plates or gill plates, which are used in herbal medicines around Asia. Marshall says that Chinese syndicated fishing boats have popped up along the Mozambique coastline looking for manta ray parts; she estimates that the price per kilo of gill plates is higher than shark fin.

The Mozambique population of mantas has suffered dramatically there. Marshall says she is trying to impress upon the government the need to protect local habitats, which are also home to numerous large sea creatures besides the rays. Marshall estimates that one-quarter of the coastline has some kind of protected status, and with a new marine-protected area project underway, that area will account for about one-third of the coastline. “I’ll spend the rest of my life working on that last two-thirds,” she adds.

With manta ray numbers having dropped by as much as 70 per cent according to some estimates, the time to get to know these curious creatures of the deep is now

The Marine Megafauna Foundation also operates a tourism arm, aimed at getting divers and boat owners to better understand manta rays. Guests can book spots on dive boats and work alongside MMF on research projects in the Maldives, the Mozambique coast, Tubbataha Reef in the Philippines, and the Raja Ampat islands in Indonesia. Guests get the chance to work alongside marine biologists, and the proceeds help fund MMF research work.

Interest in the magnificent manta rays is magnifying, and Marshall says her tours are typically booked within 24 hours of being announced. It may be that popularity breeds protection among ocean species. With manta ray numbers having dropped by as much as 70 per cent, according to some estimates, the time to get to know these curious creatures of the deep is now.

Find out more at marinemegafauna.org