One of the industry’s highest-flying freelance designers, heralded by Fairline as the flagbearer of the brand's design future, explains how he ‘divides his brain’ while working, and reveals he now has his sights set on the megayacht field 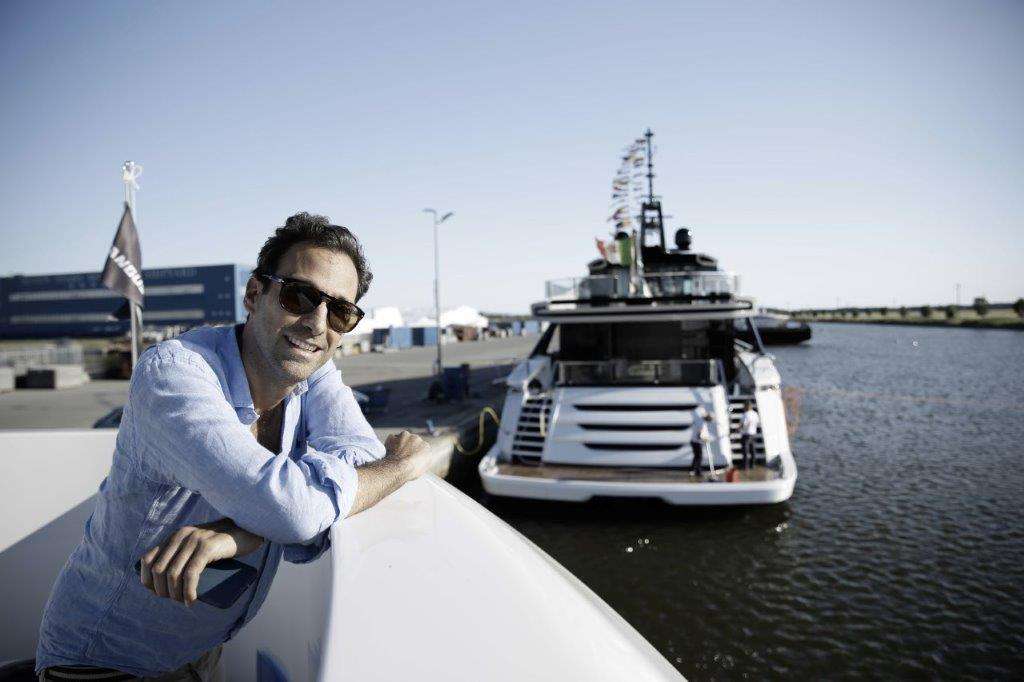 Italian verve, effortless style, the Riviera lifestyle: Alberto Mancini is, in many ways, the personification of his particular brand of superyacht design. As he effusively describes the sweeping port view from his Monaco offices, we can only imagine enjoying the Mediterranean breeze aboard one of his many luxurious designs. The crackling Zoom line will have to do for now.

Mancini grew up in the northern Italian port city of Trieste, where he often went sailing with his family. Cruising around the Mediterranean from a young age, he developed a love of the ocean and of boating, along with a habit of critiquing the yachts that sailed around him.

Mancini recalls that since childhood he has been fascinated with design – he initially moved to Turin to study automobile design at Istituto Europeo di Design (IED), but it wasn’t long before he realised his true passion lay in perfecting the sleek contours and the fine details of luxury yachts. 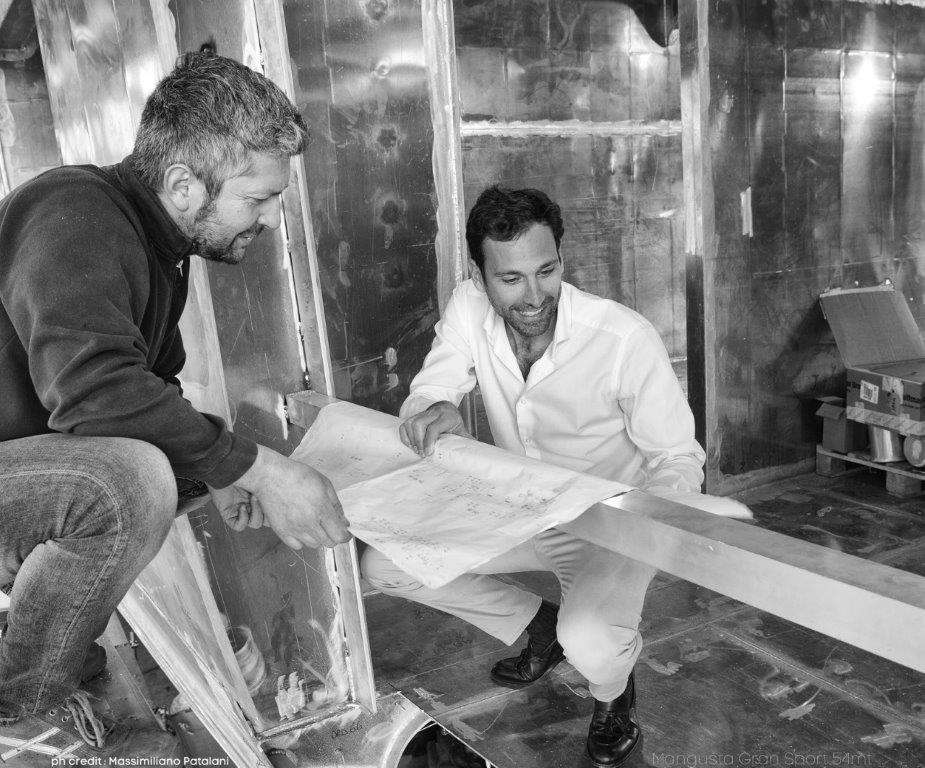 Mancini asked his tutors for permission to submit a prototype yacht as one of his final projects, and never looked back.

After earning his stripes at Officina Italiana Design, where he worked closely with Mauro Micheli on the Riva project team, Mancini later moved to England to work with Ken Freivokh Design, and was involved in the design of Perini Navi’s Maltese Falcon. Mancini has since worked on numerous prestigious projects with brands including Magnum Marine, Otam, Dominator, Overmarine, Azimut and Fairline Yachts.

Alberto Mancini Yacht Design has developed a particularly fruitful relationship with Britain’s Fairline Yachts, after forging a partnership in 2016 when the yard was revived from administration by investors.

The first Mancini-designed Fairline was the Targa 63 GTO, in collaboration with Dutch naval architects, Vripack. It went on to win several awards including ‘Best Exterior Design’ in the 50 to 80-foot category at the 2017 World Yachts Trophies. The model has been enthusiastically heralded by Fairline as “the flagbearer of Fairline’s design future”. 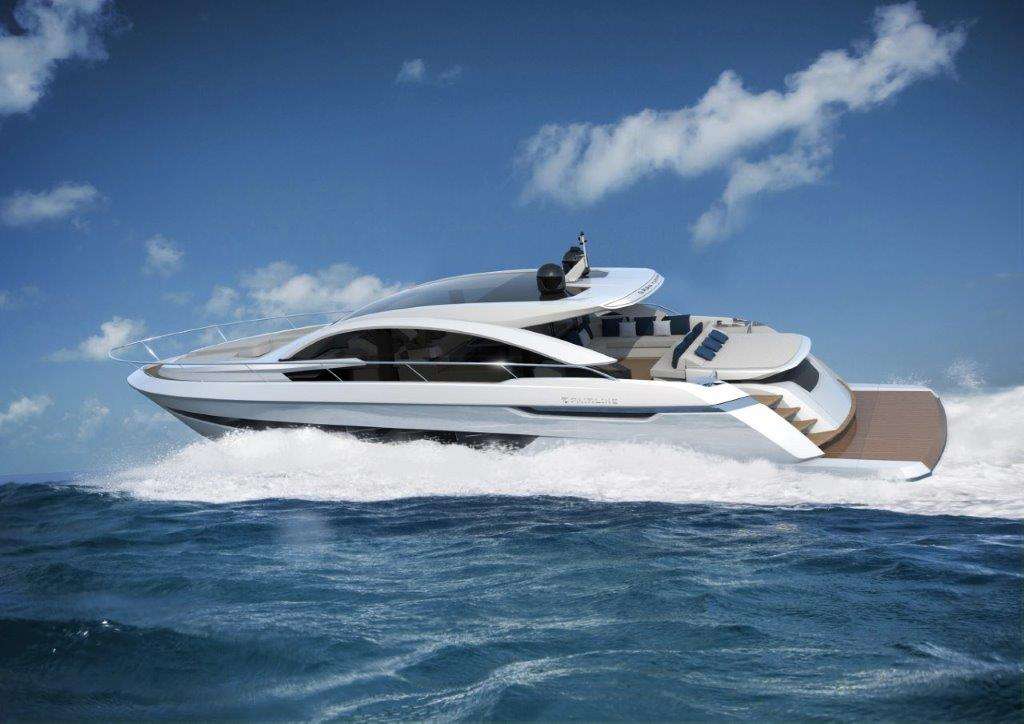 Mancini has also penned several other well-received Fairline models including the F//Line 33, Squadron 68 and the Squadron 50.

He has often been designated a ‘rising star’ in the press, but Mancini eclipsed this designation some time ago, and now sits among the industry’s highest fliers. And yet, as he reveals in an interview with Asia-Pacific Boating, he’s really just getting started. 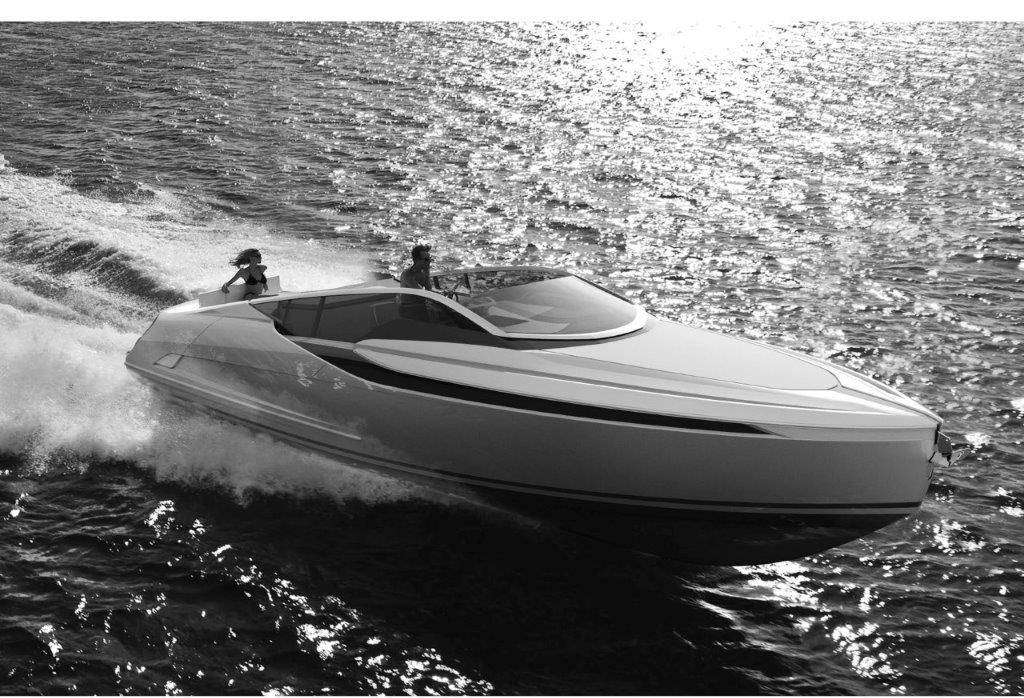 You work with a lot of big brands. What’s it like balancing that?

My strategy when I was younger was to sign a few exclusive contracts with some big shipyards, like Azimut and Mangusta/Overmarine. At the end of the day, after 10 years I feel made the right choice – although, working with these brands, it’s a bit like having two jealous wives!

It’s not easy to work in peace when you work with Fairline and a big builder like Azimut approaches you – everyone wants the best. The number of times I have come up with a concept and been told it’s too similar to a concept for another yard… We have to start again. But it’s made me stronger and sharpened my capabilities and skills. It’s a question of energy. 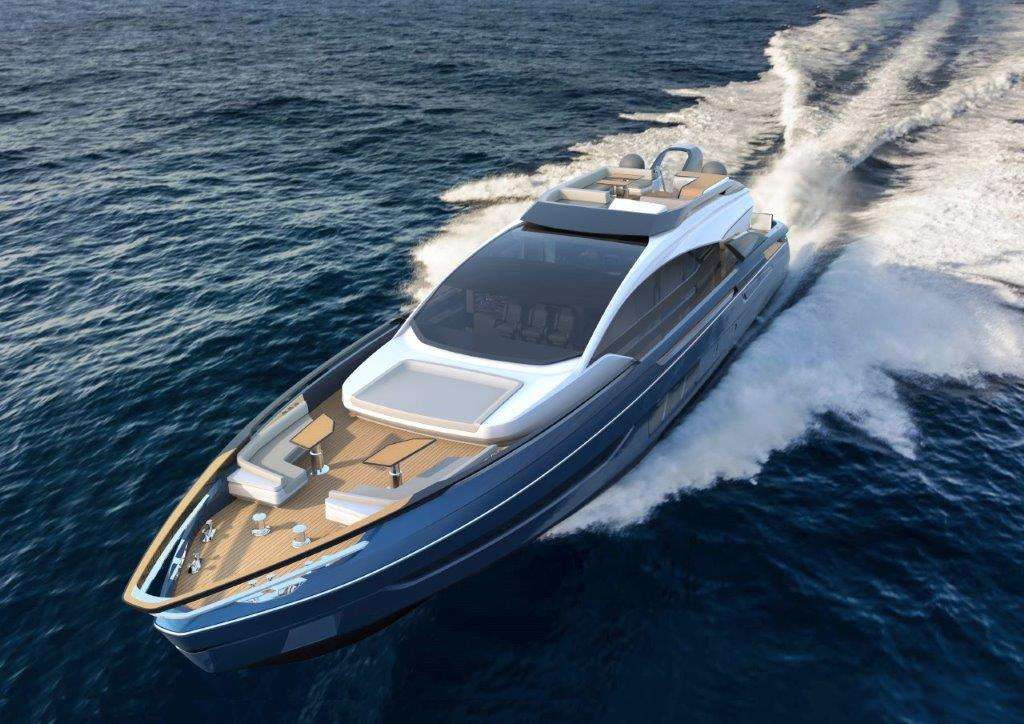 Thanks to my automotive background, I know how to divide my brain: it’s creating different DNA for different brands. When I studied car design, one of the main goals was to show the difference between one car and another one. The front of a BMW will never be the same as a Mercedes! That has helped me to keep going.

But it’s fine, as I get a lot of satisfaction: Every project in my studio is going to touch the water within a couple of years. I talk to other designers and they tell me ‘I made thousands of projects on paper’, but it’s hard for them to get many of them into the water. 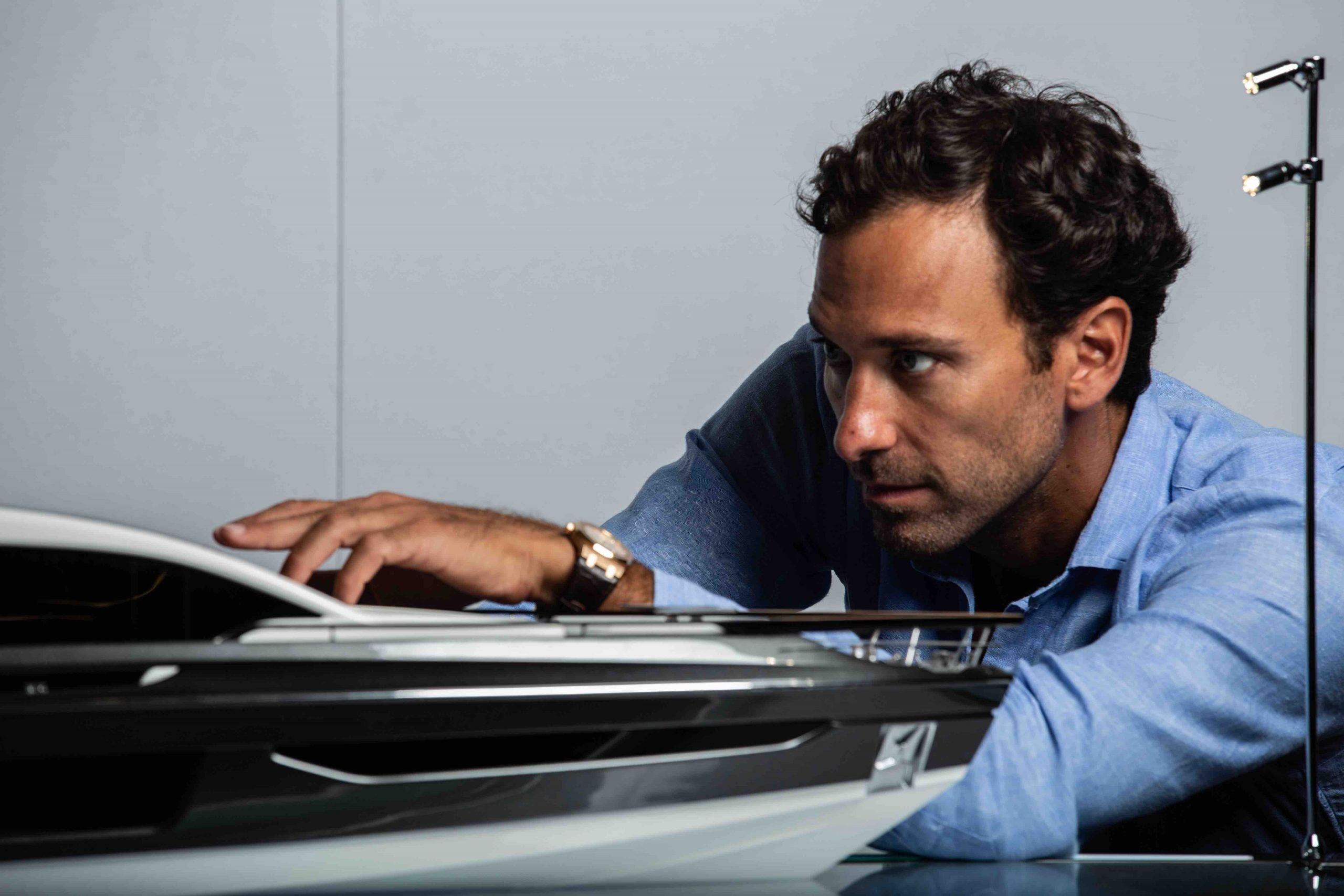 How has Covid impacted your studio?

It’s not been easy recently, as I cannot travel to visit the yards on a monthly basis, and it’s even hard for the owners to travel, but we arrange meetings in a different way and we can keep going like we were before the Covid times. It’s a different approach.

I’m still working well with Azimut, Fairline has been slowing down a little bit recently but I hope we’ll be able to display the Fairline Targa 58 GTB as soon as possible.

What trends are you witnessing at the moment?

Overall we are moving a little bit on new design projects, and there is much more demand for those above 40 or 50 metres now. Owners are demanding bigger size yachts. I am involved with Mangusta; those projects are all in the 30 to 50-metre and above range.

Owners are more efficient and demanding more and more. They may not always be so experienced, but they’ll want to jump into the design process. Perhaps they’ll change their minds many times during the design process, but that makes us stronger. 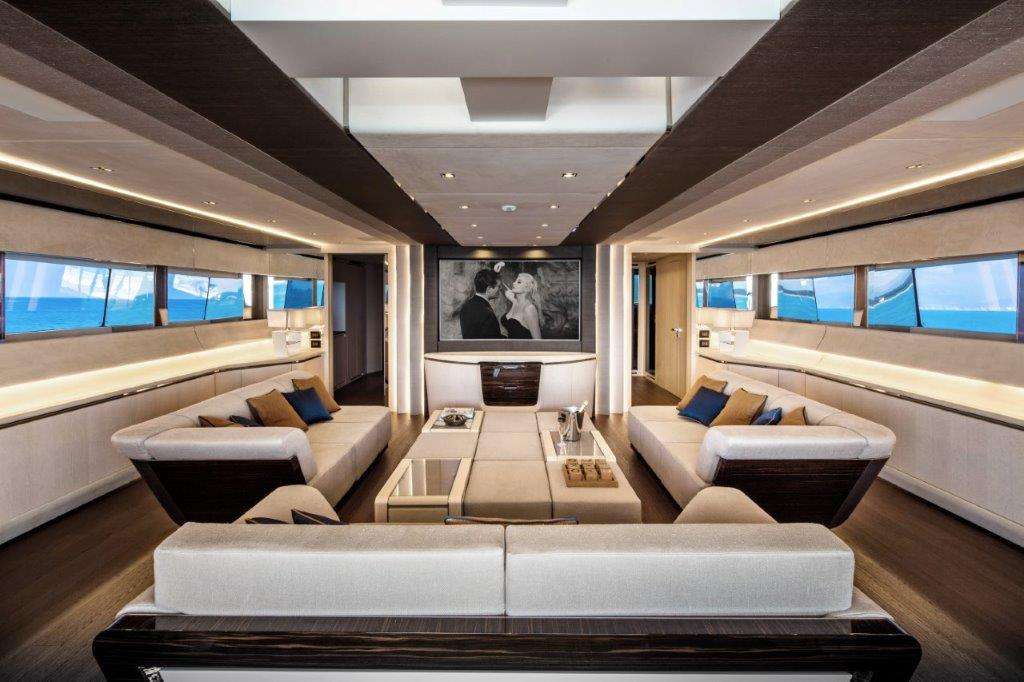 One of the strongest aspects of my studio is solving problems in the face of shipyards – exchanging information quickly. That is, I think, one of my keys of success: developing the project in a triangle between builder, studio and owner. When I have to say no to a request, I try to move my head towards the engineers and say it’s not my fault [laughs].

What keeps me motivated is to see how many different approaches there are in my job. Different clients all have different ways of thinking. We’re never bored. 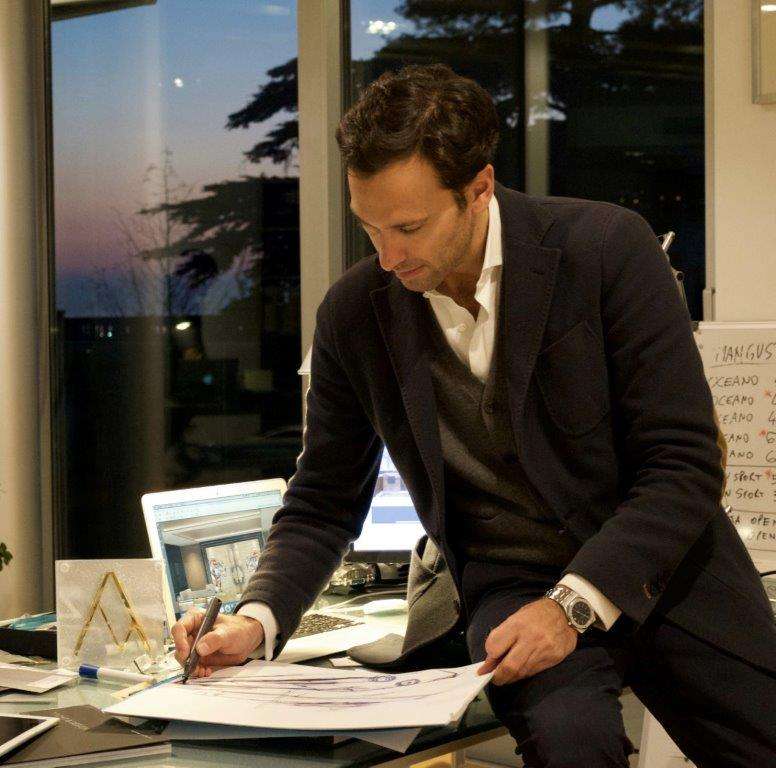 Do you particularly enjoy working on larger projects?

It’s extremely important for me to design successfully: everything from small-size F//Line 33 to a big Mangusta 54: my aim is to show and to express both of them fully.

I am trying to move more into the megayacht field, now. I am 43, and it is the right time in my career to move up to a bigger size of yacht. It’s a natural evolution for every designer. But I am not the type who wants to just show off these crazy prototypes and exercises. I prefer to work in a much more quiet environment and present my concepts directly to shipyards and keep some privacy with owners.

Designing a megayacht takes a different type of approach. Sometimes it’s easier and faster to design a 50-metre [yacht] compared to a 50-footer, as you don’t have to fight for every millimetre, you have more space to play. It’s crazy but it’s true! But it is important for my studio to design both larger and smaller. I love doing both. You never know if the guy who buys a small Fairline from you is the one who will grow up and ask for a megayacht one day.

The Targa 63 GTO was your first Fairline project, over five years ago. How did that come about?

It was very exciting – I received a call and they asked me to participate in a design contest to show a new vision for the Fairline range. So I called my guys and I said: “Okay, we have a challenge”. We worked day and night, and had several meetings in London. My only aim was to win that contest. You cannot imagine, when they rang me up to tell me “you’ve won, you’ve been selected” – I jumped out of my seat about half a metre.

We spent a lot of time thinking how to shape the first [Fairline] GTO and it was very successful, it sold well and I think they appreciate my design. We’ve already developed the Targa 43 Open, the Squadron, and the F//Line. My wish for the next few years is a new vision for the F//Line.

A lot of your designs have a ‘Riviera appeal’. What do you think are your design hallmarks?

The Riviera appeal – that is a lifestyle. I moved to Monaco because I love the French Riviera, and of course I now have a daily view on the yachting market. And I am so happy when I see a Fairline; a Squadron, a GTO docking in Monaco. I will sit there and look at the owner or the captain, see how they maintain the yacht, how they use it.

There’s definitely a kind of Mediterranean style in my design: some details are recognisable from exotic Italian cars, or a touch of car design is always there on any project I do. Especially the long platform on the back of the stern, the volume of the cockpit.

On the GTO, I think one of the most impressive design points, or selling points if you’re at the boat show, is having the stern just in front of you. You create a feeling of a bigger size yacht – that is a big draw for me. You can imagine how an owner feels with those proportions, and everything is so well made by the Fairline craftsmanship. To me, that’s the French riviera approach! 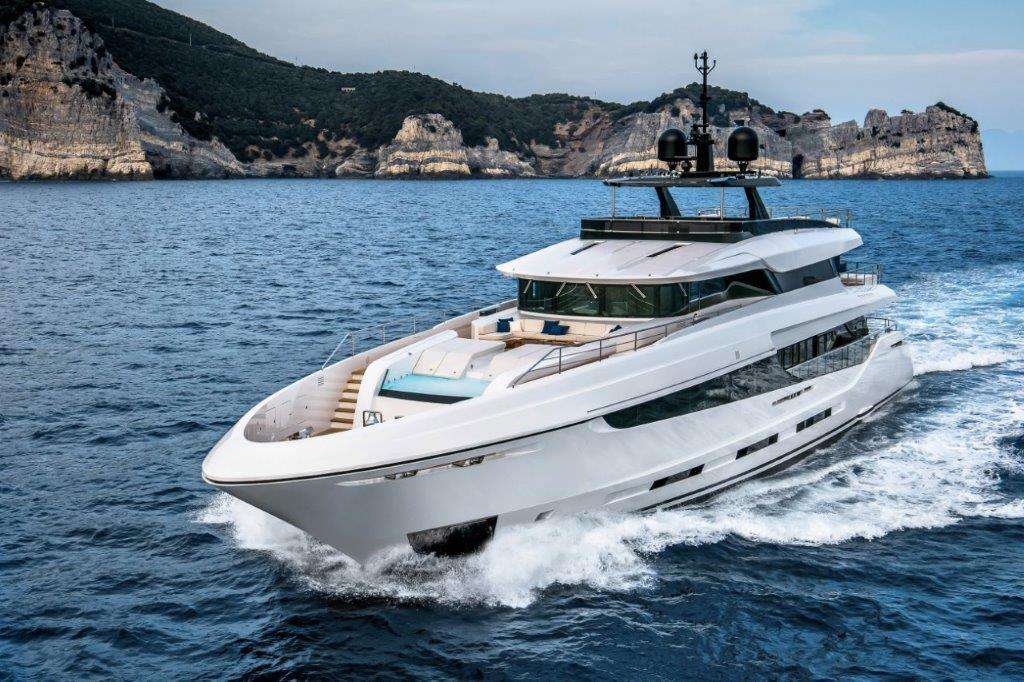 You won several important design awards: including ‘Best Exterior Design’ at the 2017 World Yachts Trophies for the Fairline Targa 63 GTO. How do you define success?

It was unexpected! Really – the competitors were very difficult to beat. Some partnerships start with the lucky stars, and I am sure that is the case for Mancini and Fairline.

When you sign a contract and you start to design with a yard like Fairline. It’s really an endless pleasure to see it on the water at Cannes and to win these awards. I appreciate how much they involve me in the marketing and design. I do recognise that they push my brand a lot.

Your designs manage to achieve the holy grail: sleek and sporty on the outside while roomy and practical on the inside. How do you achieve this compromise?

It’s a question of proportions: I can tell you from when I designed cars – if you look at cars from the 70s to today; the design is the same, completely recognisable, but the proportions are different. That is the design approach I took with Fairline boats. Clients are demanding more headroom and more volume. So how to match the type of demand along with the sleekness, and retaining a link to the Fairline DNA? The result is a new proportion that achieves all the demands, and the owner’s wishes of height. So we go up in height but we shape the deck and superstructure to keep the proportion of the sleek yacht.

With every Fairline design project, I have been very satisfied when I see the yacht launch into the water for the first time. It’s always nicer than any rendering I’ve made! That is how I know it’s going to be a success. 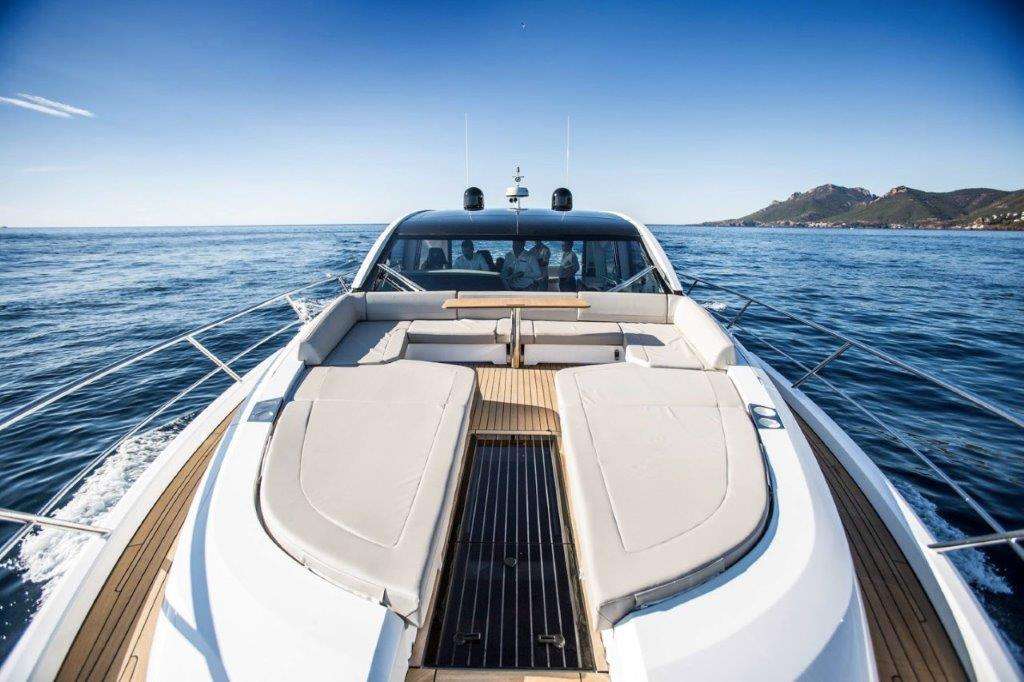 What new projects do you have underway? 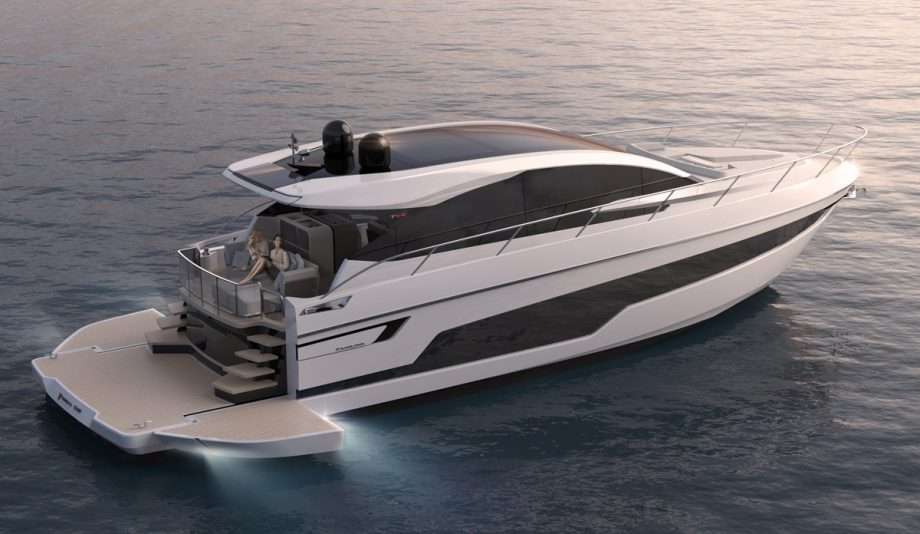 We’ve seen a lot more virtual events and launches this year. How is technology changing the way you work?

It’s very exciting – in 20 years I will be laughing with you about how we used to design yachts using software in front of a screen. Technology is going to change our experience completely and who we work and spend time in a design studio.

I am looking forward to when we can implement these virtual softwares that allow us to wear a mask and jump into a virtual world. We’re all going to be connected, and we’re going to create the shape and the layout of the yacht in this new environment together, one on one. That is going to be the big change.