Vitruvius Yachts releases the design submitted for the replacement to the Royal Yacht Britannia, giving an inside look to a secretive proposal

In 1997, just before it was decommissioned, the Britannia sailed away from Hong Kong with Hong Kong’s last governor Chris Patten, as well as the then-UK Prime Minister Tony Blair and King Charles, then the Prince of Wales. There has been a royal yacht in service to the UK Royal Family since the reign of King Charles II in 1660. 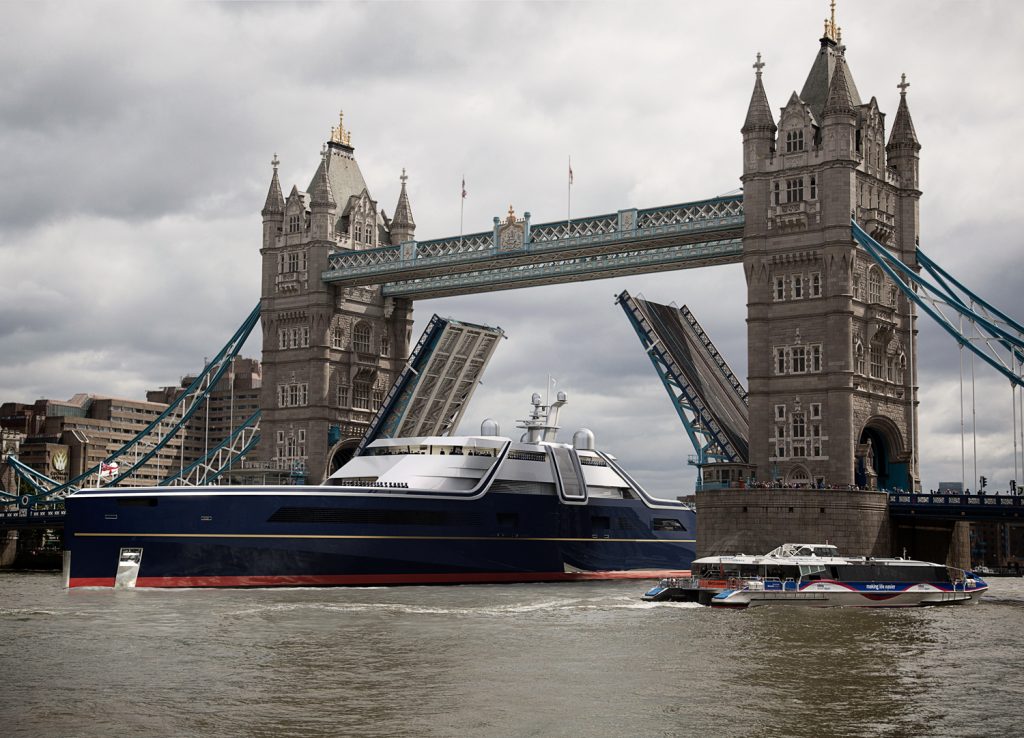 The UK government held a tender for a new, £250 million Royal Yacht Britannia, with two leading firms in contention for the design. The new vessel was to be known as the National Flagship, though it was meant to replace the Royal Yacht.

“The flagship collaboration was an incredible opportunity to act as an architect realising the design of a project that was hugely complex, because it aims to represent not the tastes of one person but the essence of an entire nation,” said Phillipe Briand in a statement. “That is actually way more difficult than designing for even the most demanding individual!”

The modern design option was submitted by Team FestivAl, a collaboration between Philippe Briand and Vitruvius Yachts as the lead firm, Zaha Hadid Architects, and aluminium ship and yacht specialists Ocea. Briand is a well-known figure in Hong Kong and has worked on projects for Hong Kong superyacht owners.

Vitruvius Yachts said in a statement that the new Royal Yacht was “designed for the people but fit for a king.” The UK government has halted the project, allowing Vitruvius to release its previously secret design proposal. 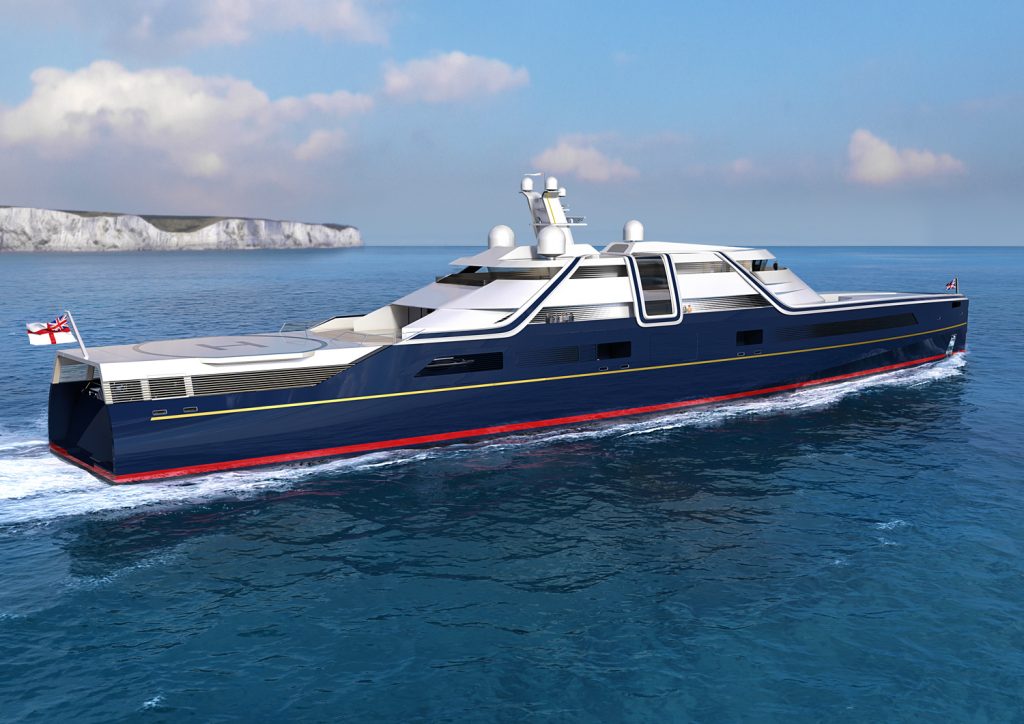 The proposed Royal Yacht would feature sustainable propulsion technology and a highly efficient hull design to reduce fuel consumption and “maximise opportunities for emerging green technologies”, with the aim of creating a zero-carbon emissions vessel.

King Charles III is widely known as an advocate for environmental causes. In 1991, he used Royal Yacht Britannia to host international delegates for an informal summit about the environment off the coast of Brazil. Among the guests were Brazilian president Fernando Collor de Mello. In 1992, Brazil hosted the first-ever UN Earth Summit in Rio de Janeiro.

The 125-metre vessel was to have 30% less hydrodynamic drag than a conventional steel ship, according to Vitruvius, with pod drives for propulsion. Power would come from a large battery bank that could be charged on shore power or by onboard generators, initially using renewable biofuels. The engineering design included provision for new energy sources, such as green hydrogen fuels and onboard solar and wind power generation. The pods also would have worked to maintain a position, meaning no anchoring would have been required.

The topsides would have had a drag coefficient of 0.28 – less than most cars. The vessel was to be built in recycled aluminium, reducing weight and therefore propulsion requirements.

The vessel’s interior would have been fitted with recycled or recyclable materials. The interior design was to be flexible, allowing the ship space to be used as a floating embassy or exhibition area, with easy access for children, the elderly or the disabled. 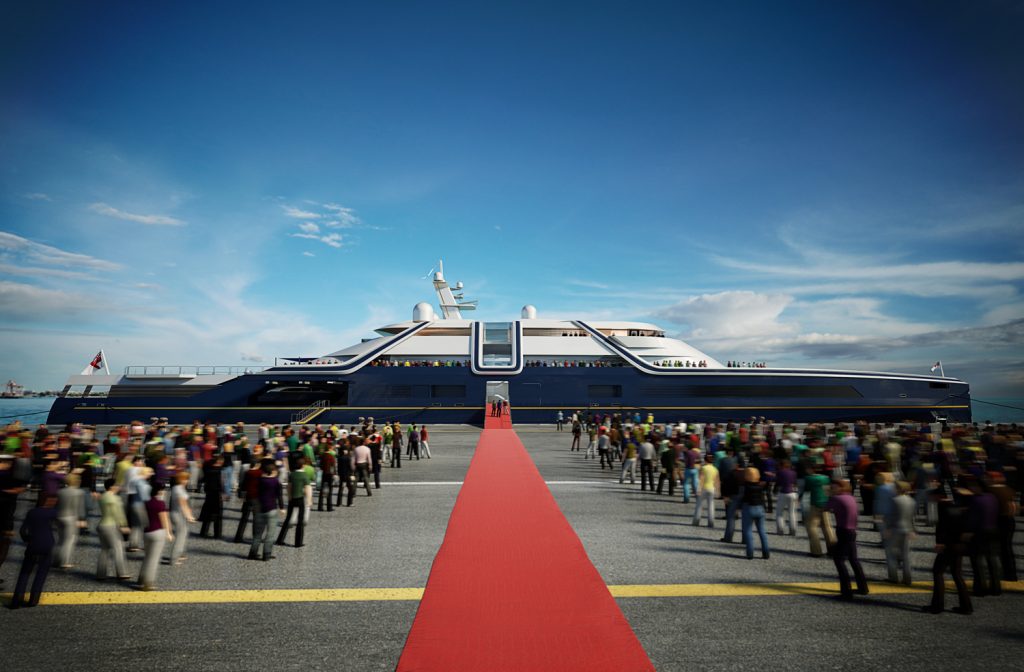 The main arrival point for guests and visitors was to be a large central atrium, with displays and presentations, and with content showcasing the UK’s maritime industry, green technology and culture.

The exterior design draws on the Union Jack flag as a motif in the side and plan view. A distinct LED-lit style line in the profile hints at the ribbon pattern in the Union flag. 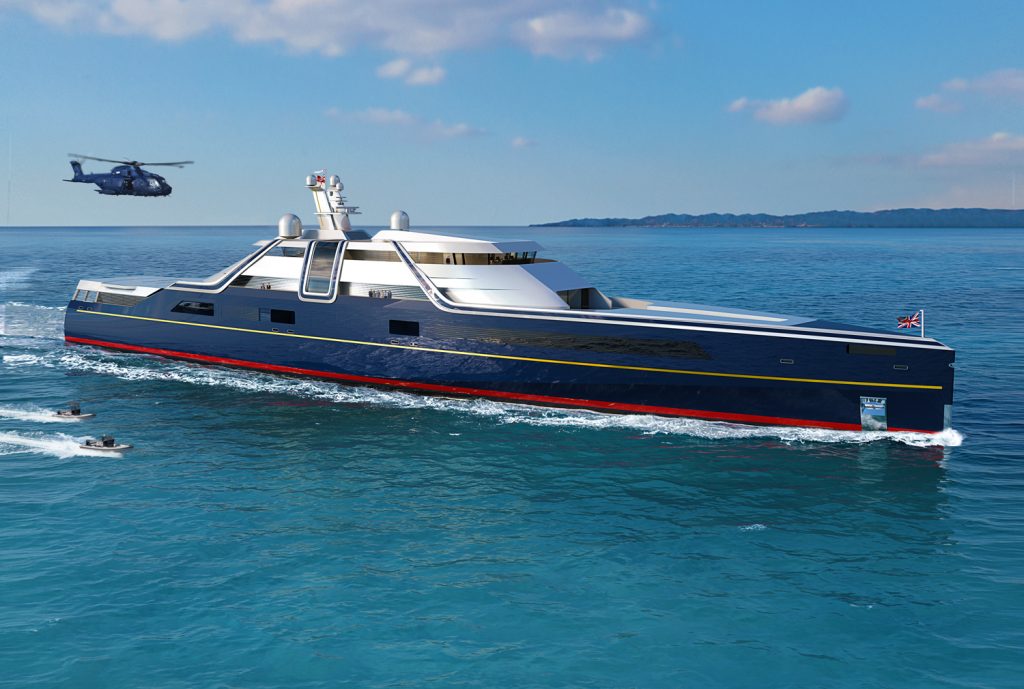 “To design a vessel – a flagship – that will become a benchmark in sustainability as well as demonstrating British excellence and heritage for current and future generations, while also being a symbol of inclusion and diversity, was an enormous challenge that kept me awake at night,” said Briand. “The nature and intensity of the project kept me focused but also filled me with pride, not just in the design process itself but for what the flagship stands for.”